A Porsche driver who fled a crash that killed four police officers put a tradie and his cancer patient wife through eight months of hell.

Richard Pusey, 41, was pulled over for travelling at 140km/h in Melbourne about 4.50pm on Wednesday and allegedly tested positive to cannabis and ice.

A chicken truck then at 5.40pm ploughed into the group of police standing at the roadside, killing four officers while Pusey dodged death while urinating.

Pusey allegedly took photos of the devastating scene including dead and dying officers, then posted them on Facebook and fled on foot.

He was arrested at Collingwood chemist the following day and appeared in court on Friday on nine charges, including speeding, reckless conduct and drug possession.

Richard Pusey, 41, the driver at the centre of a crash that killed four police officers, is a disgraced former mortgage broker with a criminal history 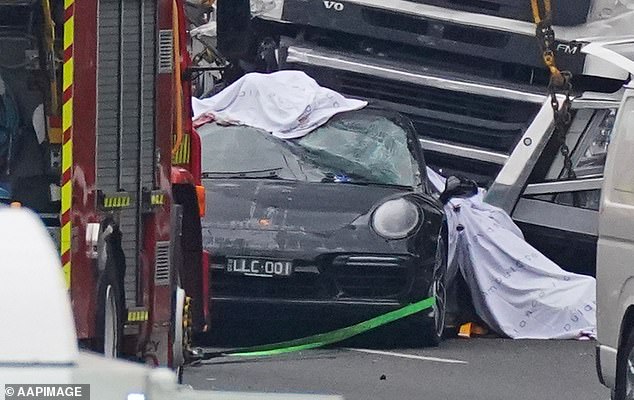 Pusey allegedly took photos of the devastating scene including dead and dying officers, then posted them on Facebook and fled on foot (his mangled Porsche 911 is pictured)

This is not the first time Pusey has been the centre of a scandal after putting a woman suffering cancer and her husband through six months of hell.

Pusey’s alleged behaviour did not surprise cabinet maker Lloyd Lester, who along with his wife Kim were tormented by the disgraced mortgage broker.

‘My boss said ”what kind of a dog does that’ and I said ”a pussy”,’ Mr Lester told Daily Mail Australia.

Shocking footage from March 2016 emerged on Thursday showing Pusey screaming at Ms Lester through a car window that he ‘hoped she died’ from her cancer.

‘Get some more f**king cancer you stupid f**king sl*t, I hope you f**king die,’ he could be heard yelling.

Mr Lester said he wife was severely traumatised by the incident, which originated with a dispute over a kitchen he installed for Pusey in 2015.

‘My wife only had a double mastectomy two days earlier for her breast cancer and she was holding the drain bags coming out of where her breasts used to be as he was screaming at her through the window,’ he said.

‘It was so traumatic it took her two years to recover enough to be able to sleep at night.

‘She’s really rattled by today too. She was scared to be alone, she was scared every night that he was going to break into the house.’ 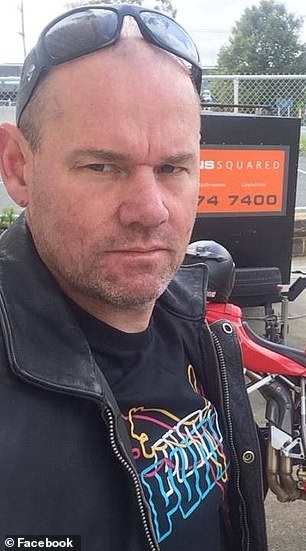 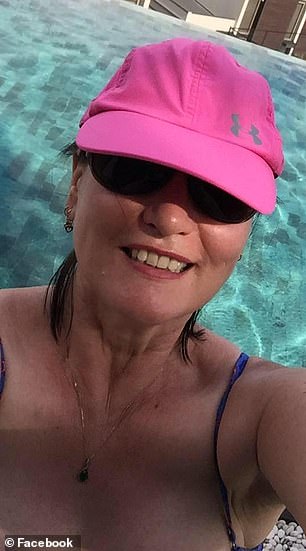 Pusey’s alleged behaviour did not surprise cabinet maker Lloyd Lester (left), who along with his wife Kim (right) were tormented by the disgraced mortgage broker

Mr Lester claimed the incident was a calculated attempt by Pusey to gain the upper hand in the business dispute.

‘The day before that video happened my wife said he’s coming to the showroom tomorrow to try to get me to beat him to a pulp so he could take us to the cleaners,’ he said.

‘Good thing she told me or I’d have got myself put in prison.’

About the same time, Mr Lester said their address was posted online by a pseudonym saying ‘a paedophile lives here’.

‘So my wife and I were getting phone calls from heavy-breathing men at 11pm for months.’

Mr Lester said his business at the time, Kitchens and Bathrooms Squared, was not out of pocket because they refused to do work that wasn’t paid for.

‘Financially we didn’t get screwed, just my wife’s mental health,’ he said.

‘He’s probably nuts because he got teased so much as a kid for his name.’ 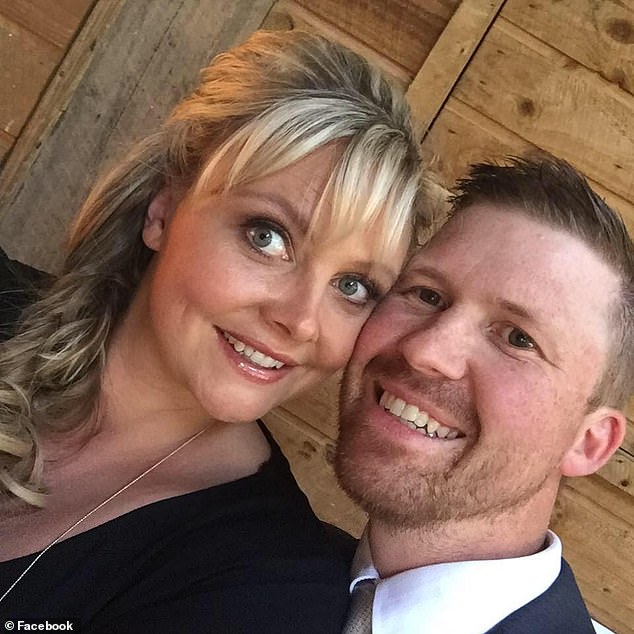 Pusey engaged another tradie, Todd Templeton (pictured with his wife), to make a new kitchen for him – then started complaining

Mr Lester said his daughter, who worked for him at the time, became a target and police took out a restraining order against Pusey on the family’s behalf.

The story began in 2014 when Pusey engaged another tradie, Todd Templeton, to make a new kitchen for him – then started complaining.

‘I finally got sick of it and called him pedantic, I don’t know if he was high that day but his face just changed. From then on I was enemy number one.’

Pusey eventually failed to pay the last $6,006 and Mr Templeton took him to the Victorian Civil and Administrative Tribunal.

He failed to appear at the March 1, 2016 hearing, claiming, without evidence, that he had a stomach ulcer procedure that day and Mr Templeton won.

In the intervening time, Pusey contracted Mr Lester to make a whole new kitchen within months of Mr Templeton’s job.

‘We pulled out a very good kitchen that was less than a year old that obviously wasn’t good enough for him,’ Mr Lester said. 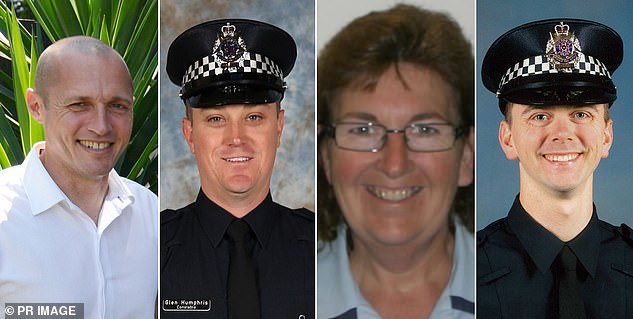 ‘As soon as it was done he spat the dummy and we redid it twice.’

Pusey then launched a counterclaim for the $35,000 he paid Mr Lester, claiming the first kitchen was ‘not as per order, they were defective, they were of poor quality’ and the services were ‘not rendered with due skill and care’.

The Civil and Administrative Tribunal dismissed his counterclaim as an ‘abuse of process’ and the Supreme Court upheld this on appeal.

Mr Templeton said he was not surprised Pusey was accused of taking photos of the crash scene and posting them on Facebook as it was ‘right up his alley, he’s that sort of person’.

Mr Templeton claimed Pusey also had strange habits that got creepier the longer he worked for him.

‘He’d constantly send me weird videos. One was him pissing into someone’s toilet, then against someone’s wall or a pole,’ he said.

‘He prided himself on how much he was able to minimise his tax. He said he got it to like three per cent. He said whenever he saw a receipt on the ground he’d pick it up and claim it.’ 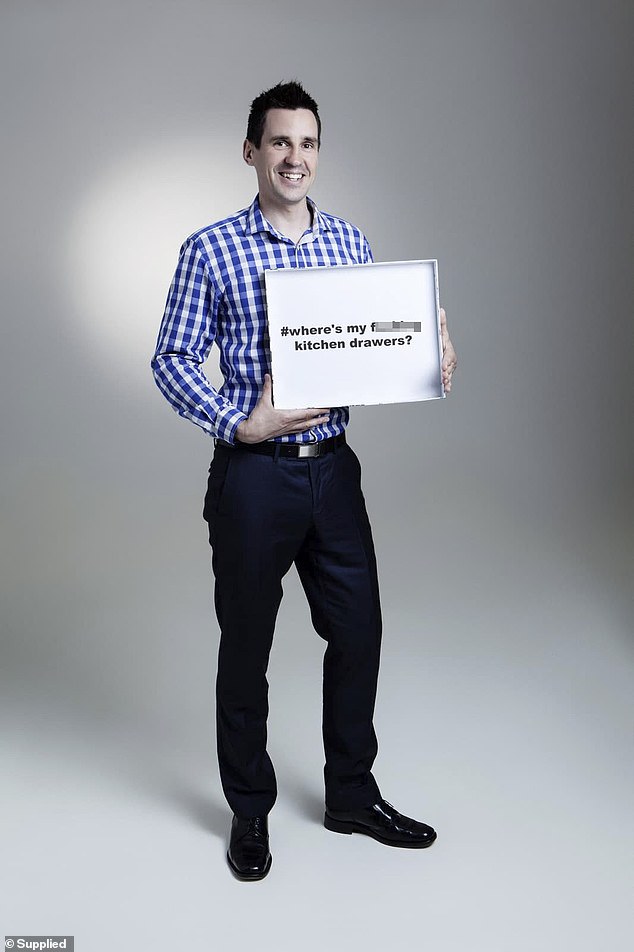 A picture Pusey sent Mr Templeton during the dispute over the kitchen as he kept asking the tradesman back for small variations, more than 10 times over four months

Mr Templeton said this was for a huge fence Pusey put up and the council told him to take it down and took him to court.

‘But then he just built a bigger fence to piss them off. That’s his nature when he gets told no, he’s just a spoiled rich boy,’ he said.

Pusey appeared in a report on A Current Affair in 2016, dubbing him ‘Richie Rich’ and ‘Australia’s nastiest customer’, where the car window video was shown.

When confronted by ACA he was asked on camera: ‘Who screams at a cancer patient?’ He responded: ‘Oh right, is that what that is, is it?’

He sold a historic building on Guildford Lane in the Melbourne CBD for $4.4million in September, after buying it in 2017 for just $2.8million and renting it to a cat cafe.

However, he is widely hated in his profession, one describing him as a ‘playboy living the fast life’.

Pusey, who ran Switch Now Home Loans until last July, bragged about his car and frequently uploaded videos of himself racing his Porsche 911.

His car, which was also filmed speeding down the same highway on March 21, also features prominently in his dozens of TripAdvisor reviews of anything from pubs to the Melbourne Airport Skybus.

‘I like to drive behind the bus in my Porsche because it doesn’t have wifi,’ he wrote in a review of the Skybus in October 2018.

‘I set the cruise control so as to allow me to social network and all that cool new age type stuff that’s all the rage.

‘Me and my Porsche enjoy the day out doing this activity.’

In another review he referred to a helicopter service as a ‘Porsche in the sky’ and again spoke of his penchant for stealing the Skybus wifi.

‘When I’m not racing my Porsche or chasing the sky bus for it’s free wifi I like to get up and dance,’ he wrote.

The shocking revelations about Pusey’s dark past come as sources claimed that police were investigating whether the driver of the chicken truck was on drugs at the time of the fatal accident. 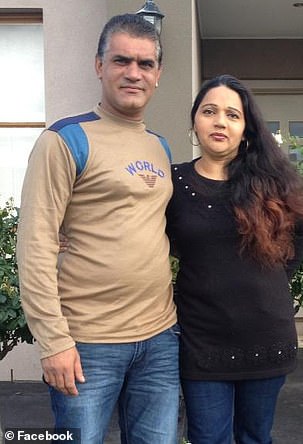 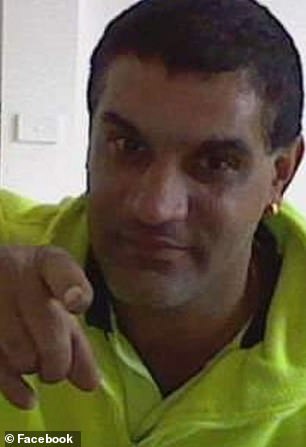 Police are investigating whether truck driver Mohinder Singh Bajwa was under the influence of drugs at the time of the horror Eastern Freeway crash, after an ice pipe was allegedly found on the front seat

Mohinder Singh Bajwa was behind the wheel of the semi-trailer on Wednesday afternoon when he ploughed into two police cars, who had pulled over an allegedly speeding Porsche 911.

According to insiders police officers allegedly found an ice pipe in the front cabin of the vehicle.

The Herald Sun reports that just moments after the crash, Mr Singh Bajwa was heard to say: ‘I was looking down in the cabin and I looked up and they were just there.’

He then suffered a medical episode, collapsing to the ground.

Mr Singh Bajwa, from Cranbourne in Melbourne’s south-east, remains under police guard in hospital, two days after veering into the freeway emergency lane near Kew at a speed of about 100km/h.

On Friday Constable Humphris’ devastated partner of four years, Todd Robinson, shared an emotional tribute to the officer, saying he loved his job and had ‘a smile that lit up any room’.

Mr Robinson had been preparing dinner at their home when he heard the news about the crash, but was still expecting his partner to walk through the door.

‘I was expecting him to come home, and he didn’t,’ Mr Robinson said. 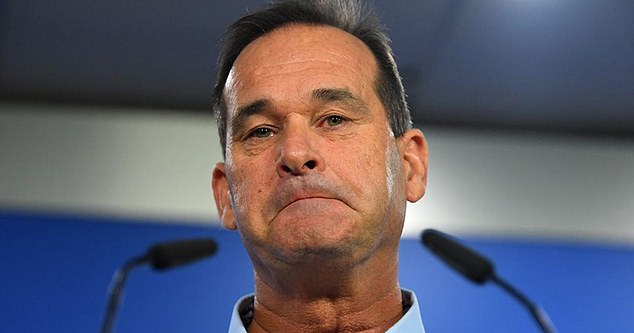 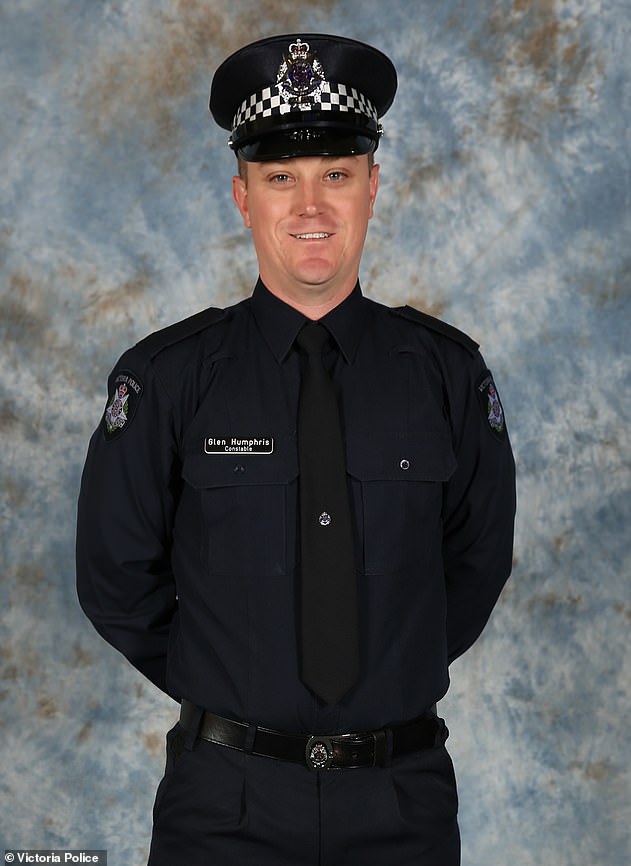 He assumed his partner was busy controlling the scene of the accident when he first heard reports about it on the news.

‘But after two hours of nothing being heard it was confirmed on TV four had been killed,’ Mr Robinson told reporters.

‘It was then I got a knock on the door.’

He said that his partner’s smile could ‘light up any room’ and he was proud to be a Victoria Police officer.

‘He loved helping people,’ he said.

Tragically it may not be possible for family and friends of the fallen police officers to attend their funerals which are limited to 10 people per service to limit the spread of coronavirus.