Porsche named the most unreliable car brand ahead of Land Rover

Motorists who have splashed out big on a Porsche sports cars and SUVs, look away now.

The premium German brand has just been named the most unreliable car maker in a report that analyses the volume of faults, cost of repairs and days off the road for all the major manufacturers.

Extended warranty provider, Warrantywise, scored Porsche a meagre 35.1 out of 100 in its Reliability Index, which is based on data for over 131,000 cars being driven in Britain.

We’re not telling porkies! Porsche has been named the most unreliable car brand by Warrantywise. See if the make you drive was among the 10 worst performers

‘Joining Porsche is a range of premium luxury passenger car makers; proving that despite a high price tag, even for a used car, luxury cars could also cost owners more in the long run,’ Warrantywise says.

The index gives every car a total score based on a number of factors.

These include the cost to carry out repairs, how often they encounter issues and how many days they’re in a garage being fixed. 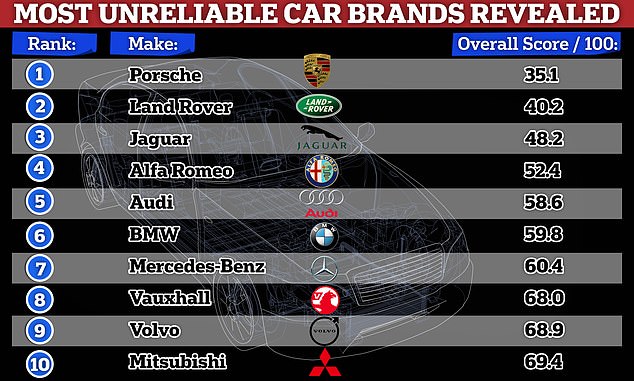 The data represents only cars that are outside their manufacturer warranties, meaning the minimum age for the sample is three years. The maximum age for cars included in the analysis is 10 years.

While the premium German maker took the unwanted crown as the least reliable brand, the highest repair bill for a Porsche encountered in the last two years wasn’t the priciest on record.

Warrantywise said it had to pay out a massive £10,784.60 to have one customer’s Porsche fixed, but that paled in comparison to a Land Rover that racked up a garage receipt of £23,889.53 – that’s almost the price of a brand new Volkswagen Golf. 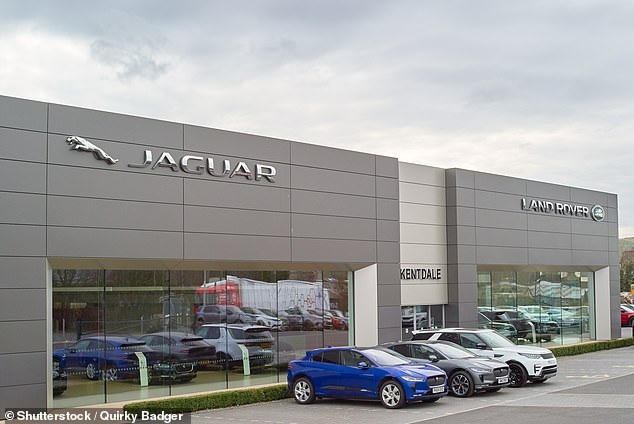 Land Rover and Jaguar placed in second and third place respectively in the order of the most unreliable brands. And some of the repair bills for cars were astonishingly expensive

With cases of such enormous repair costs, it’s no surprise that the British is next in the list of ten most unreliable brands.

Its Range Rover was named the least reliable car in the summer by Warrantywise, and it contributed towards Land Rover as a whole scoring a reliability rating of just 40.2/100.

Source: Warrantywise. Figures based on single repair bill for models from each brand in the years 2021-22

Sister brand, Jaguar, took the third from bottom spot with a reliability score of 48.2.

The most expensive Jag to repair was also pricier than any Porsche, with a dodgy turbocharger on one of the British cars costing £16,990.02 to resolve.

Alfa Romeo, which doesn’t have the best historical track record for making reliable motors, came fourth from bottom in the order, with German premium makes BMW and Mercedes close behind.

The Swedish marque was flanked by Vauxhall and Mitsubishi to complete the ten worst-performing brands.

Lawrence Whittaker, CEO of Warrantywise said that while luxury brands offer a premium price, their suites of high-end technology mean they are more difficult and expensive to fix if something goes wrong.

‘Premium prices really do make for premium costs, as is evident from the data in the Reliability Index,’ he explained.

‘And, with more technology in high-end cars than ever before, we suppose it’s only natural that they require a bit more TLC than normal.

‘As the concept of luxury has expanded and become more available to a wider audience, high-end supercars are clearly still in high demand.’

Just last month, Warrantywise furnished us with the list of ten manufacturers with the best reliability records.

In fact, the rankings of the most dependable brands was a very East Asian affair, with Kia, Hyundai and Mazda also among the best performers.