A Port Authority of New York and New Jersey commissioner caught on camera delivering an expletive-laced tirade to police officers during a traffic stop has apologized and denies she was seeking special treatment.

Caren Turner issued the statement Wednesday, a day after the Tenafly Police Department released the dash-cam video showing her attempting to pull rank on the officers who pulled over a car in which her daughter was a passenger for an expired registration March 31.

The video also shows the Democratic lobbyist becoming increasingly agitated with the responding officers and shouting ‘you may shut the f*** up’ at them.

In her statement, Turner apologizes for letting her emotions get the best of her and regrets her tone and language directed at the police officers. She resigned her post last week. 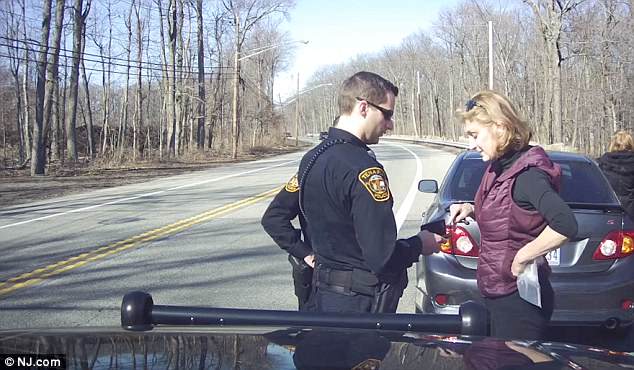 In her statement, Turner apologizes for letting her emotions get the best of her and regrets her tone and language directed at the police officers

‘Last month, my daughter and three of her friends were in a car that was pulled over by a Tenafly police officer for non-moving violations, including having tinted windows,’ she said in a statement obtained by NJ.com.

‘The officers subsequently decided to impound the vehicle, leaving the four young adults on the side of a busy highway.

‘Concerned, I hurried to the scene to assist them. As a parent, I was upset and uncomfortable with the unfolding events. I let my emotions get the better of me and regret my tone toward the police officers and use of off-color language. For this, I apologize.

‘However, at no point did I violate the Port Authority’s Code of Ethics or ask for special treatment for anyone involved, nor did I suggest, in any way, that I would use my position at the Port Authority to affect the outcome of the violations issued to the driver. My resignation from the Port Authority is a recognition that this unfortunate incident could and should have been avoided.

‘As a long-time Tenafly resident, I have always taken an active role in the community, including working with law enforcement officials, and I encourage the Tenafly Police Department to review best practices with respect to tone and de-escalation, so that incidents like this do not recur.’ 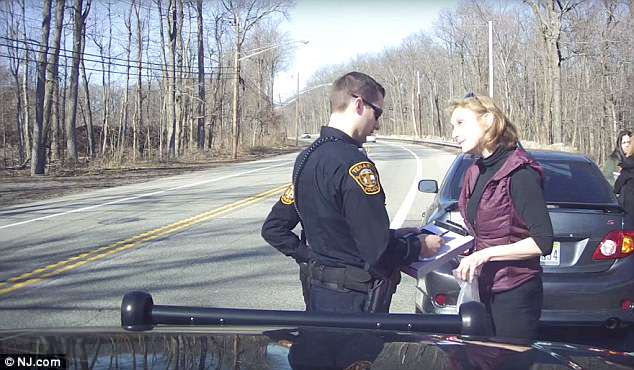 ‘However, at no point did I violate the Port Authority’s Code of Ethics or ask for special treatment for anyone involved,’ she added

She abruptly resigned her position as a commissioner for the Port Authority of New York and New Jersey.

The resignation was prompted by an internal investigation into ‘profoundly disturbing conduct,’ the agency said.

‘I am the commissioner of the Port Authority and I am heading up over 4,000 police officers,’ she says.

The Port Authority is an interstate agency jointly run by the states of New York and New Jersey.

It oversees the half-dozen Hudson River crossings that connect New York City to the Garden State, all of the major area airports, and other sites.

Turner had served as the ethics chair of the Port Authority before her resignation.

‘The conduct was indefensible,’ a spokesperson for the agency said.

‘The board takes its recently adopted Code of Ethics for commissioners extremely seriously and was preparing to form a special committee to review the findings of the Inspector General investigation and take action at this Thursday’s board meeting. 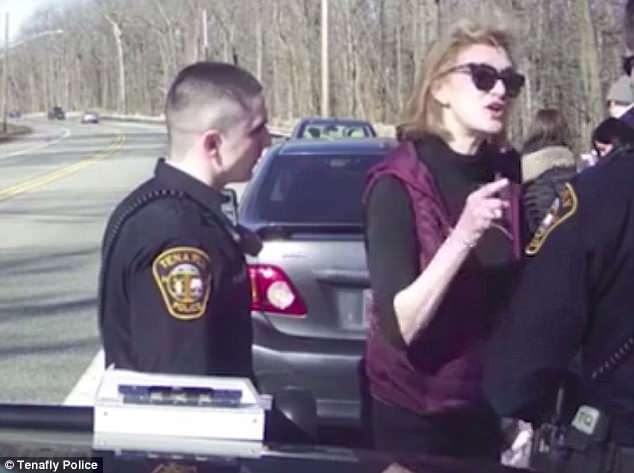 During her confrontation with the officers, Turner threatens to use her connections to the Tenafly chief of police and the mayor 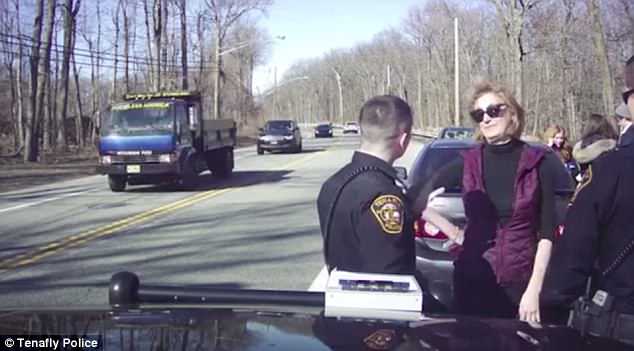 Officers said that the driver of the car, who has not been identified, had a valid license, but he did not have the proper registration or insurance

The eight-minute clip recorded by Tenafly Police dash cam begins with Turner approaching two officers after they pulled over her daughter’s friend.

The officers stopped the vehicle because its front windows were tinted.

‘I am the commissioner of the Port Authority and I am heading up over 4,000 police officers,’ she could be heard stating at one point in the clip.

Turner continues with boasts about her relationship with the mayor and the police commissioner. 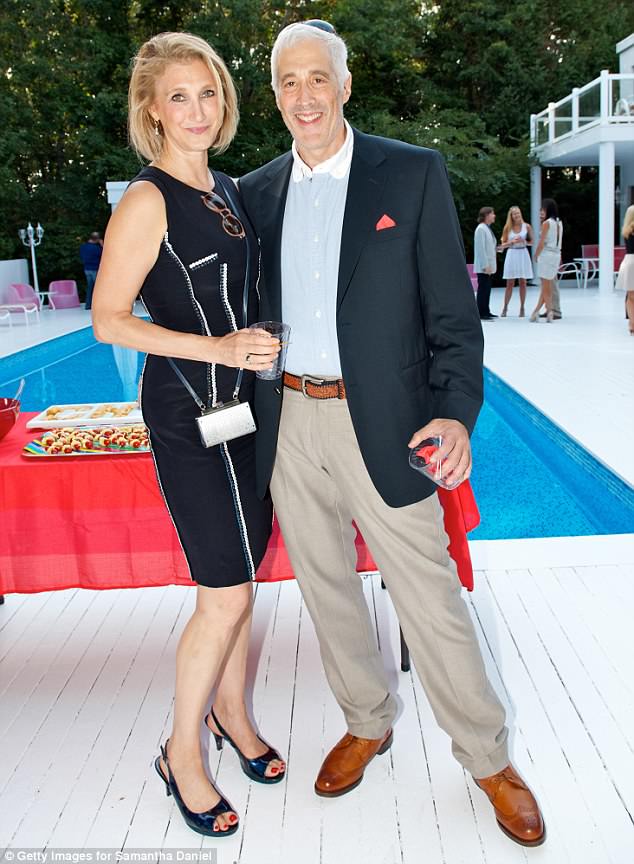 Turner was appointed commissioner last year by former Governor Chris Christie. She has served on finance committees of Hillary Clinton and former Governor Jon Corzine. She is pictured in at an event in 2013 for then NYC Mayoral Candidate, Jack Hidary

When the officer explains to Turner that the vehicle is unregistered, she asks: ‘Why were they pulled over, first of all?’

‘Miss…’ the officer says before he is cut off.

‘Commissioner, all due respect, the driver will tell you,’ the officer says.

‘The car is getting towed now,’ the officer says.

‘Why is the car getting towed?’ Turner asks the officer.

‘Go ask him,’ the officer replies.

When Turner insists on getting an answer, the officer, exasperated, tells her: ‘Miss, this does not involve you one per cent.’

Turner replies: ‘Yeah, it does.’

‘I’m picking them up and I’m offering to take responsibility for them and you can’t even tell me the charges,’ she says to the officer.

When Turner again asks why the car is being towed, the other officer says: ‘Everything has already been explained.’ 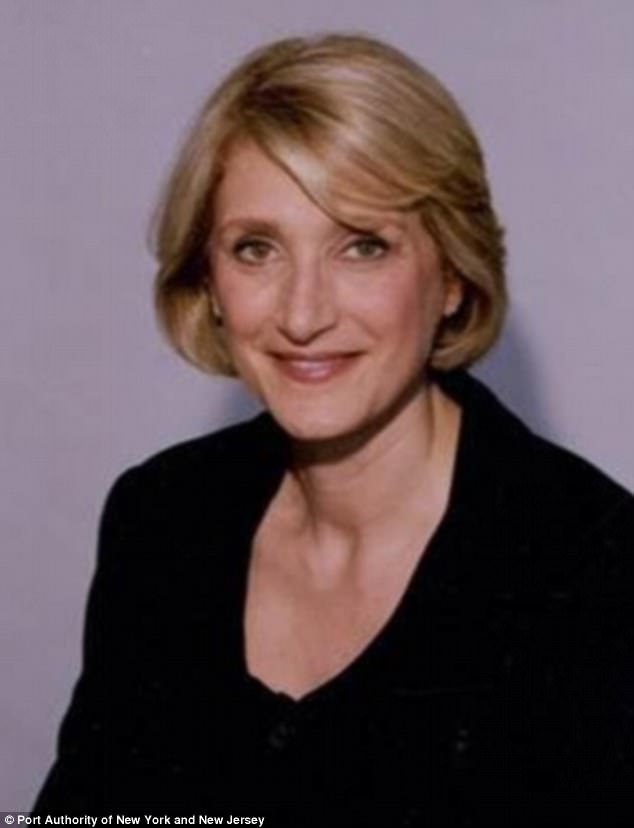 Turner then mentions the fact that one of those pulled over is a ‘PhD student… attending Yale graduate school’.

‘This is impacting me,’ she says. ‘I gotta take four people on Easter Sunday back to New Haven, [Connecticut, where Yale University is located].’

One of the officers then tells her he has a ‘problem’ with ‘the way you just approached me and your demeanor.’

‘I don’t appreciate your demeanor,’ the officer tells Turner. ‘You’re being very demanding with me.’

The officer tells her ‘You have no right to know what’s going on’ and that she was welcome to read the police report.

‘That’s my daughter,’ Turner says. The officer replies that she’s a ‘backseat passenger.’

Turner then threatened to use her sway with the commissioner of the Tenafly police.

At that point, one of the officers warns her to ‘take a step back’ because ‘you keep moving closer to me.’

Turner then tells the officers that she is ‘under no legal obligation to tell them what she is going to do.’

‘This is a lawful motor vehicle stop,’ the officer tells Turner. ‘You are here to pick them up. The driver has been advised of everything that’s going on.’

‘You know what? I hope you have a really nice holiday weekend because you just ruined it for a lot of people,’ she says to the officer.

Turner tells the officers she is refusing to ask the driver about the alleged violation and is instead seeking answers from them because ‘you’re the source of the accusation.’

‘I’m very disappointed in the way the two of you are acting,’

‘You cannot even tell me, a mother living in Tenafly for 20 years, with two kids who went through the school system, what the problem is. And that’s shocking.’

When the officer suggests that they all move off the road due to safety reasons, she calls the officers ‘pathetic’ for ‘not being able to put a sentence together.’

‘You are a disappointment,’ she says to the other officer, who was mostly quiet as his partner tried to explain the situation to Turner.

When the officer tells her: ‘You may take [your daughter and her friends] now,’ Turner replies: ‘You may not tell me when to take my child.’

‘You may shut the f*** up and not tell me when I may take my kid and her friends who are PhD students from MIT and Yale,’ she says.

‘You may tell me nothing,’ Turner says. ‘Shame on you.

When the officer volunteers his badge number, she says: ‘I got your name. Don’t you worry.’

The officer replies: ‘As long as you got all the information right.’

‘Have a pleasant weekend,’ the officer says.

‘You have a wonderful weekend,’ Turner replies.

She has not been charged with any criminal wrongdoing.

Her name and image have been deleted from the Port Authority web site.