Portland mayor slams federal agents after he is tear gassed

The mayor of Portland was left struggling for breath when he was hit by tear gas sprayed by federal agents on Wednesday.

Mayor Ted Wheeler scrambled to put goggles on after the noxious gas was used on crowds of Black Lives Matter protesters outside the city’s federal courthouse.

It comes as authorities announced three federal agents may have been permanently blinded in the clashes between law enforcement and demonstrators this week.

Wheeler told The New York Times: ‘I’m not going to lie — it stings; it’s hard to breathe. And I can tell you with 100 percent honesty, I saw nothing which provoked this response.’ 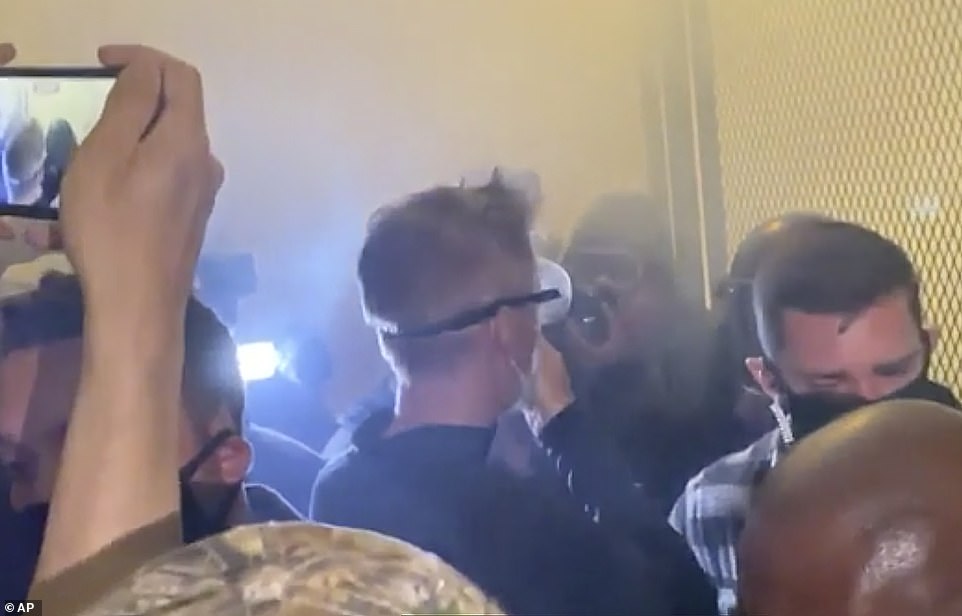 As hundreds gathered for another night of clashes in the Oregon city, Wheeler was met by angry crowds who chanted ‘tear gas Ted has got to go’ 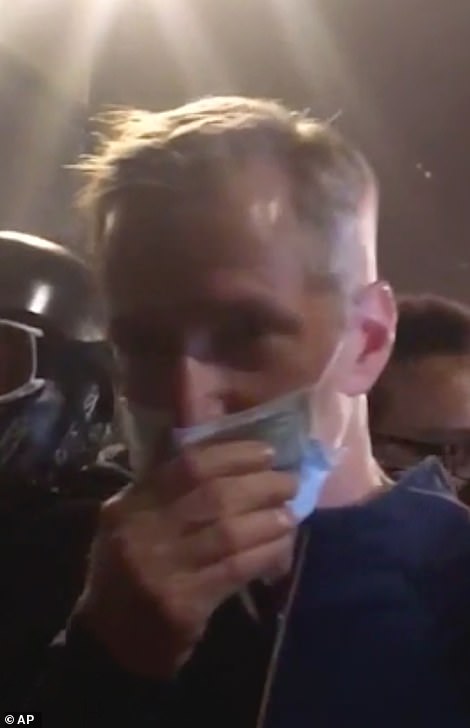 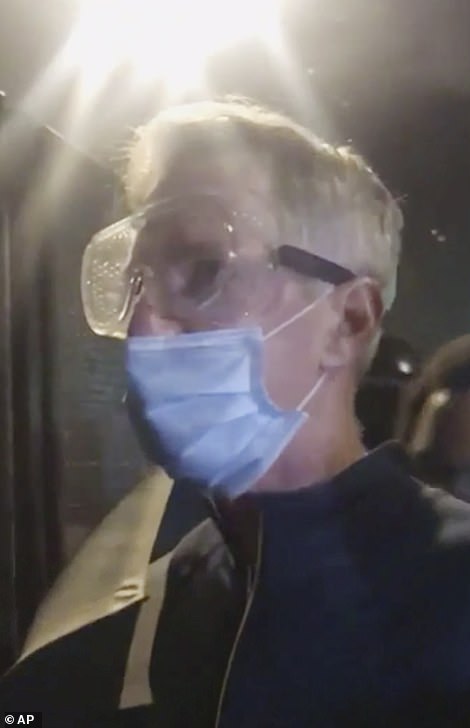 Wheeler insisted he was doing ‘everything in my power’ to get rid of the federal officers. Pictured, struggling for breath after the gas was sprayed at protesters

As hundreds gathered for another night of clashes in the Oregon city, Wheeler was met by angry crowds who chanted ‘tear gas Ted has got to go’.

Tear gas was used by city agents until a federal judge ordered its use to be limited to only when there was a safety issue.

Tensions have been mounting in the streets this week as federal agents have been seen violently shoving ‘Wall of Moms’ protesters who have donned yellow t-shirts and formed human barricades to protect Black Lives Matter rallies.

But Wheeler insisted he was doing ‘everything in my power’ to get rid of the federal officers.

This comes as Chicago gears up for a night of demonstrations Thursday, with calls to action circulating on social media after Donald Trump ordered an ‘immediate surge’ of feds into the city.

America’s third-largest city is now on edge, rocked by a soaring rate of violent crime and now fears of increased tensions sparked by federal agents deployed by the president. 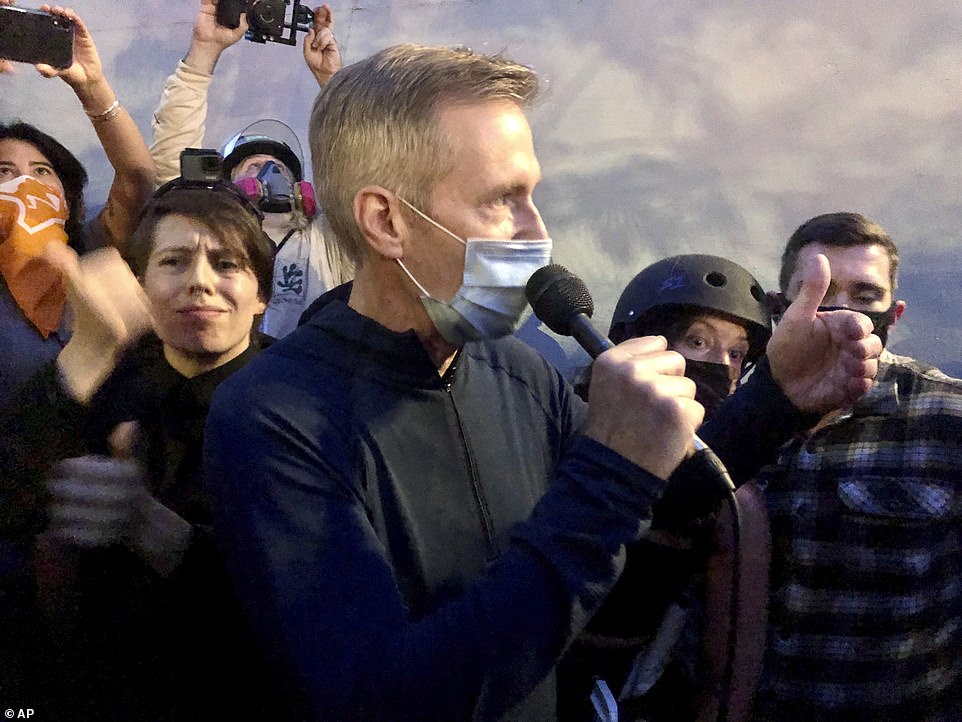 The mayor of Portland was confronted by protesters Wednesday night, as authorities announced three federal agents may have been permanently blinded in the clashes between law enforcement and demonstrators this week 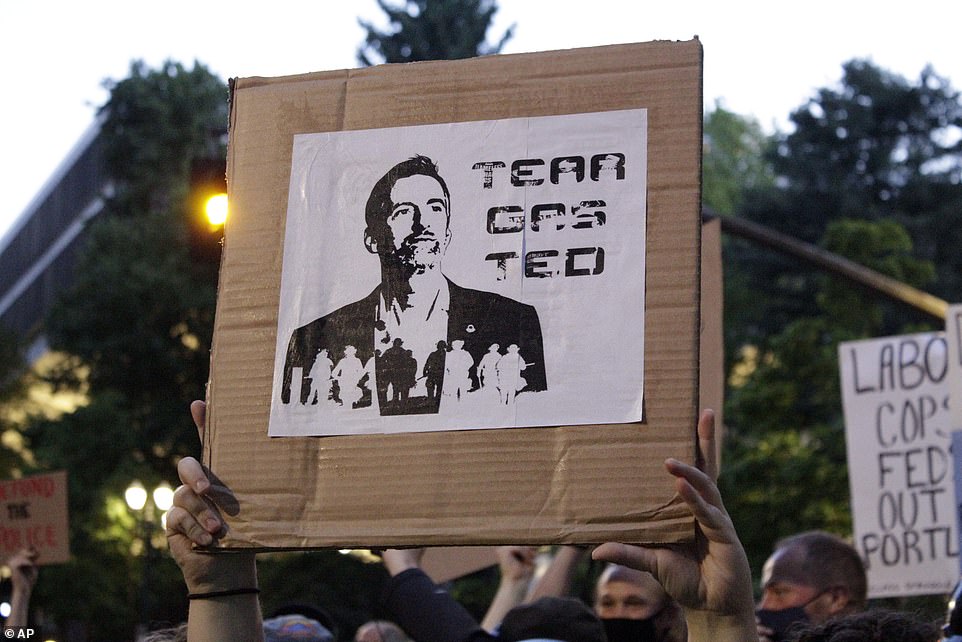 Mayor Ted Wheeler was met by angry crowds who chanted and held banners reading ‘tear gas Ted has got to go’, as hundreds gathered for another night in the Oregon city

Mayor Wheeler made an appearance at a protest in downtown Portland Wednesday night, where he promised he was doing everything in his power to push the federal agents out of the city.

‘I am doing everything in my power to get them to leave,’ he told protesters in footage captured by OPB.

He was met with outrage from the crowds chanting ‘tear gas Ted must go’, swearing at him and calling for his resignation as he made his way into the crowd.

One man walked up and emptied a bag full of shrapnel in front of him causing Wheeler to stop in his tracks, while another came up behind him and put a police hat on his head which he swiftly removed.

Wheeler spoke into a microphone telling protesters he was there to hold a ‘listening session’ where he wanted to hear their views.

Crowds pushed forward as he urged them to ‘step back’ to prevent ‘crushing’. 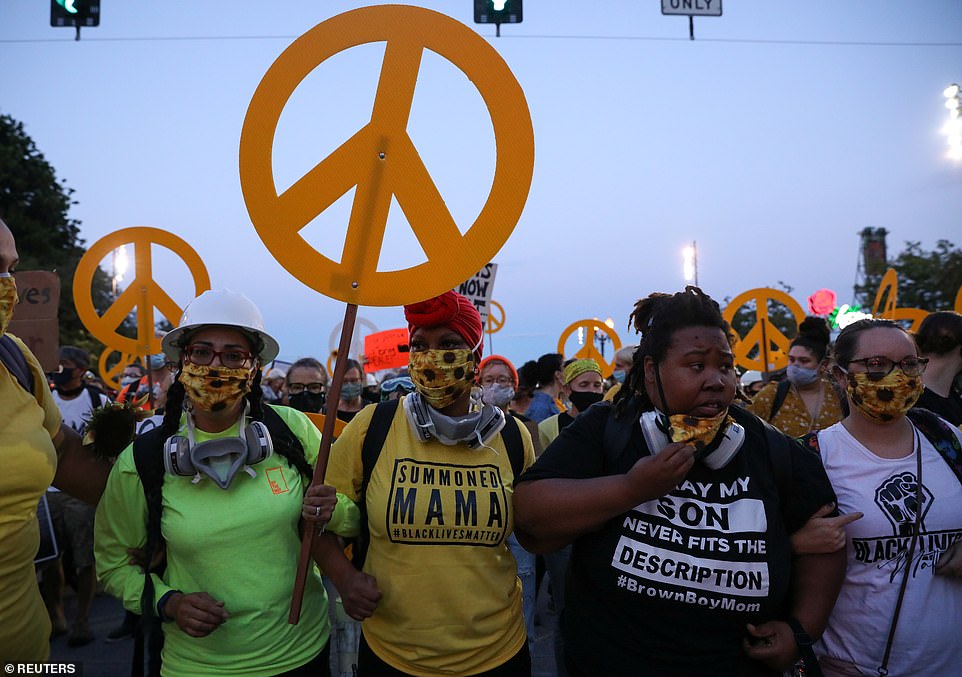 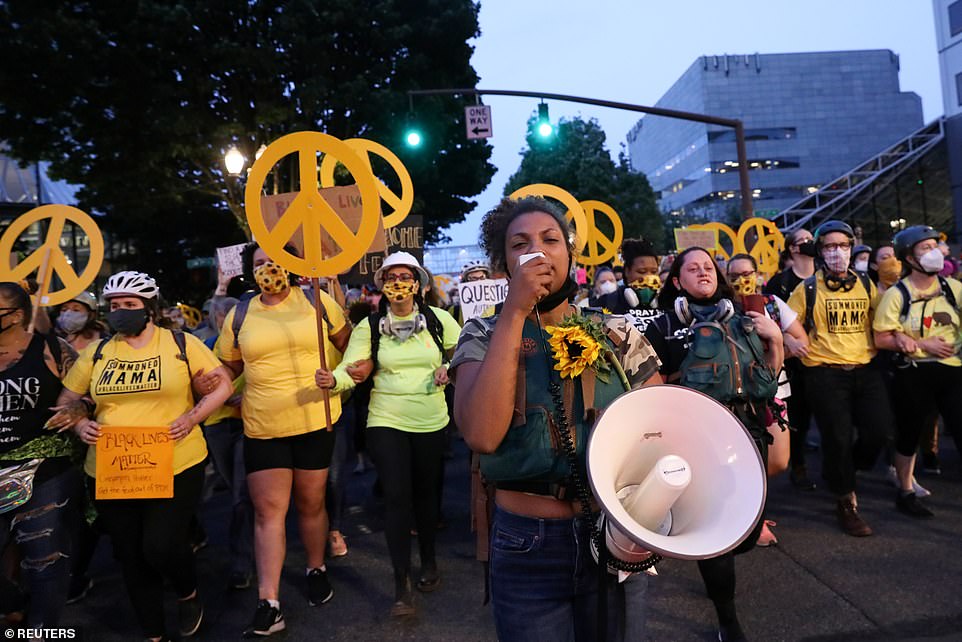 The Moms gather and march in Portland for another night Wednesday 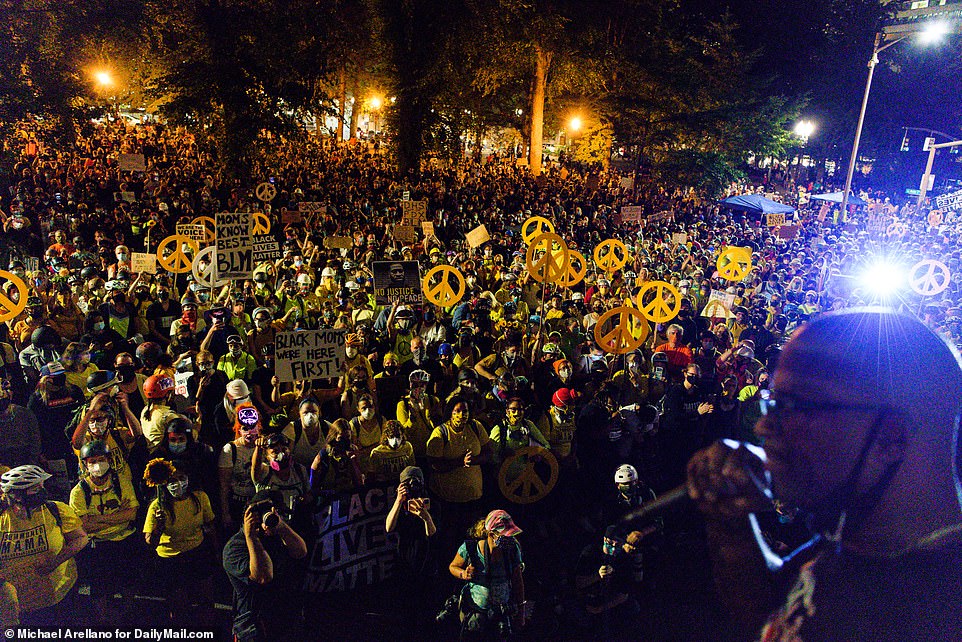 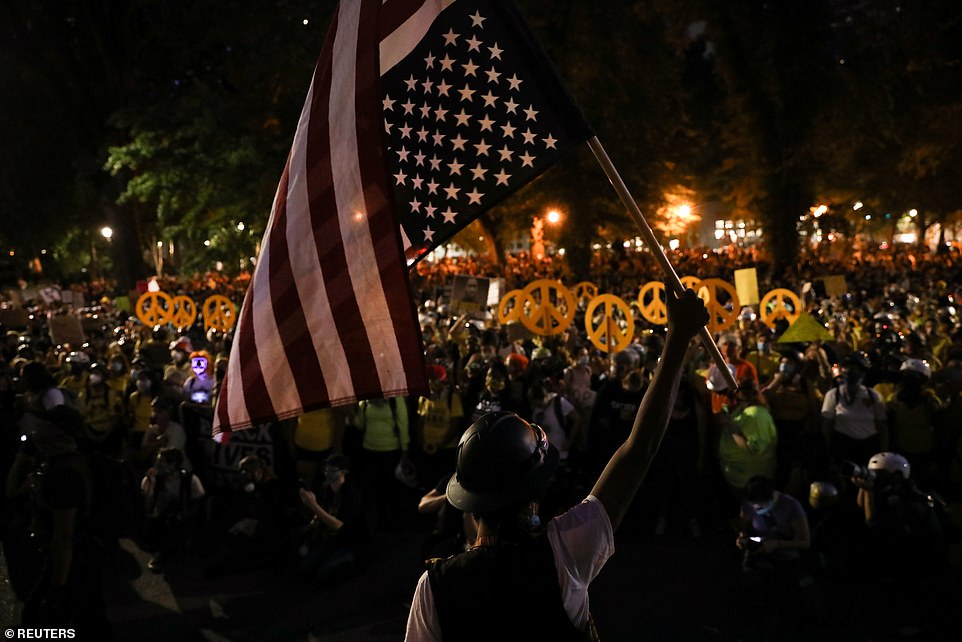 Mothers protest against racial inequality and police violence in Portland

‘I thought this was going to be a listening session not me doing all the talking,’ he said as he faced a barrage of questions.

When asked by one protester about the police allegedly working with Proud Boys, where he said ‘it would be appalling to me personally’ if this was true.

The Proud Boys is a far-right neo-fascist organization that admits only men and encourages political violence.

‘I can not regulate Daryl Turner. He’s a union official,’ said Wheeler.

This comes after Turner and Portland City Commissioner Jo Ann Hardesty exchanged a fierce war of words at a city council meeting earlier in the day where Hardesty called him a liar and said cops could be setting fires in the city during protests to stoke unrest.

Hardesty also accused Wheeler and Turner of inviting the ‘federal goons’ to the city.

‘It is appalling to find out the Portland Police Association and the union president continues to lie to the public on a daily basis about the lack of cooperation by Portland police personnel,’ Hardesty said. 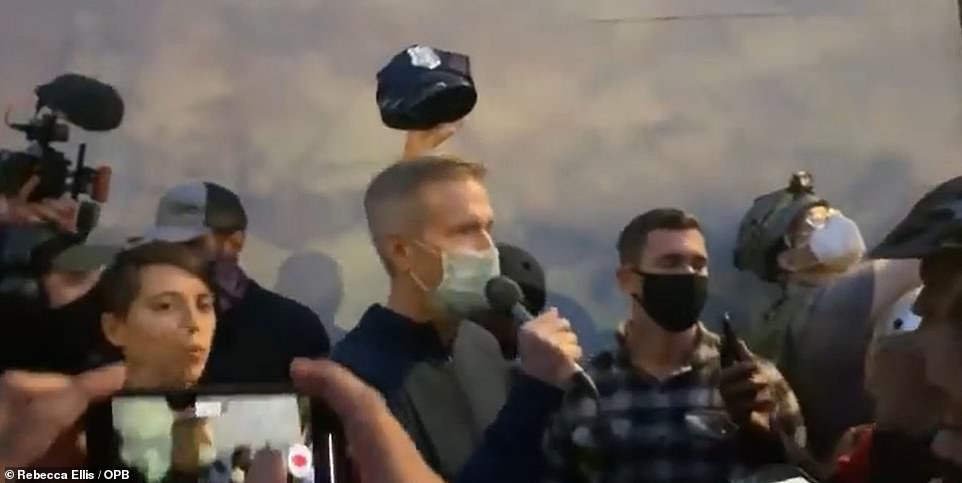 Mayor Wheeler made an appearance at a protest in downtown Portland Wednesday night, where he promised he was doing everything in his power to push the federal agents out of the city

‘If Portland does not stand up now and we as a City Council don’t hold our own police officers accountable for this egregious behavior, we will be – we will go down in history of having failed in our obligation to protect community members.

I still have to question why was Portland police not protecting Portlanders when these federal goons came in and started attacking us rather than joining the federal goons who were attacking peaceful protesters.’

Turner hit back at the claims demanding she produce evidence to back up her ‘outlandish accusation’.

The city council passed new policies Wednesday, banning all Portland police bureau members from cooperating with federal agents as city officials want to rid the city of the troops sent in by Trump. 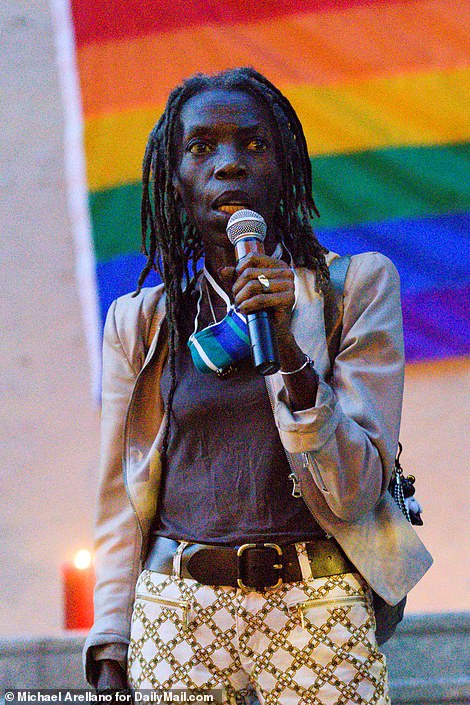 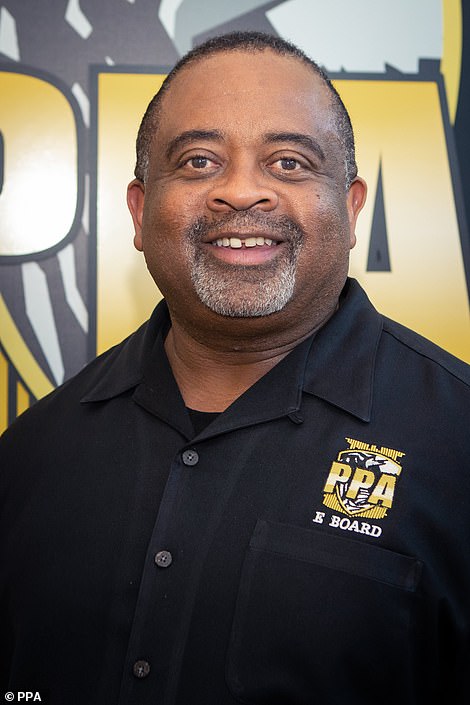 Meanwhile, federal officials are also blasting the actions of protesters, with at least three federal agents in Portland being blinded in an altercation this week.

Authorities said the three agents may never recover their vision after it was damaged when people shone lasers in their eyes and threw fireworks toward at the city’s federal courthouse earlier in the week.

On Monday night, one person also allegedly threatened to cut off the water supply to federal officers inside the building.

While tensions continue to bubble over in Portland, concerns are mounting that Chicago is headed the same way after Trump said he was sending in federal agents there.

Trump escalated his federal intervention in cities Wednesday by deploying FBI and other agents to Chicago and Albuquerque to quell what he claims is out of control violence. 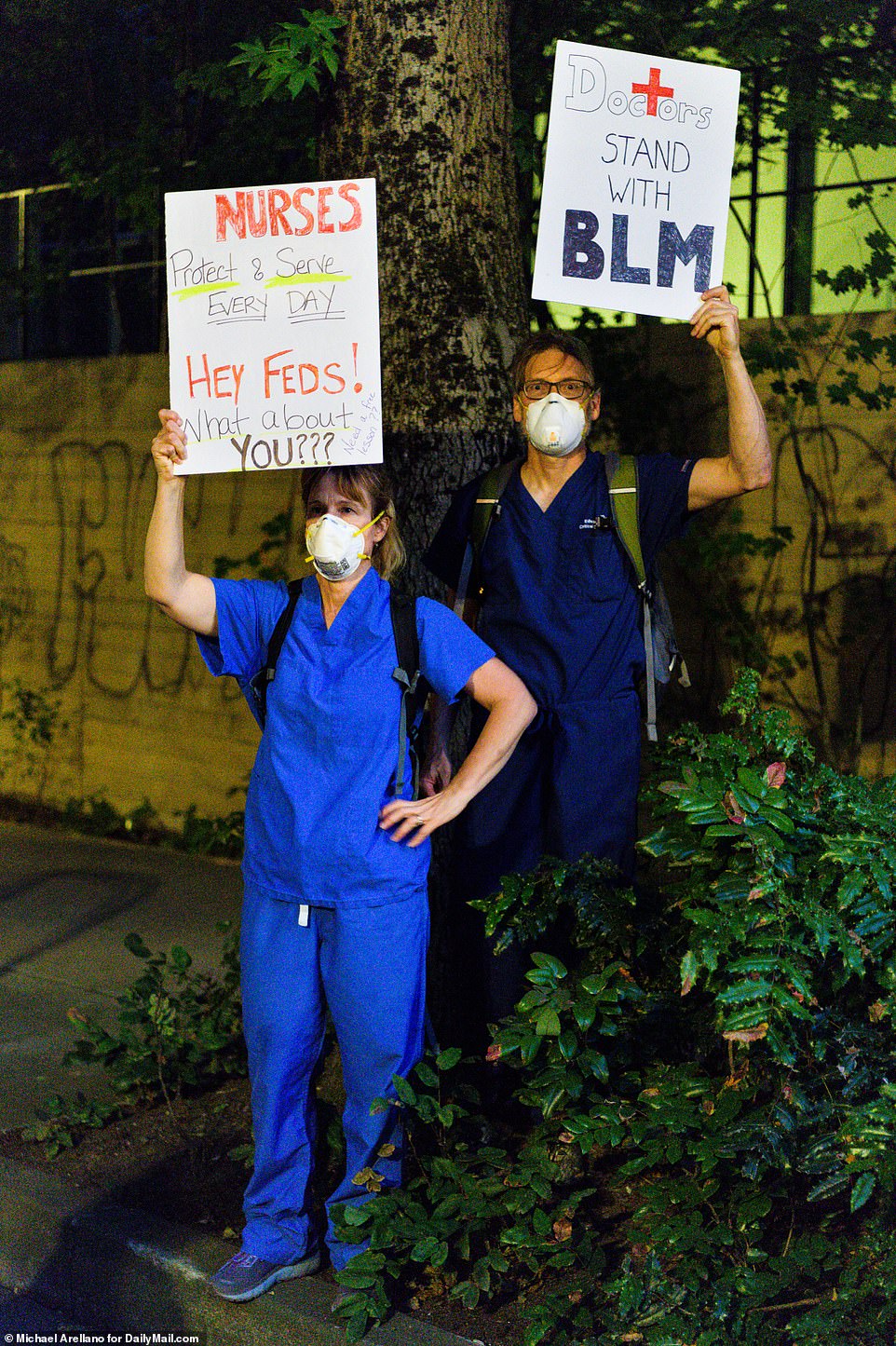 The president said he was sending ‘hundreds’ of federal agents into Chicago and other cities to combat street violence – including an influx of a controversial Homeland Security unit that has been deployed in Portland.

The president also said he was holding back on dispatching what he termed ‘large numbers’ of federal agents, pending requests from city mayors – then added: ‘At some point we may have no other choice but to go in.’

Trump ordered the agents in after Chicago has been ravaged by escalating violence in recent weeks including a shootout at a funeral home Tuesday.

‘The FBI, ATF, DEA, US Marshalls Service and Homeland Security will together be sending hundreds of skilled law enforcement officers to Chicago to help drive down violent crime,’ Trump said at the White House.

Chad Wolf, the acting director of the Homeland Security Department, sought to stress the distinction between the two missions in Chicago and Portland after concerns have been raised after the controversial actions in the Oregon city. 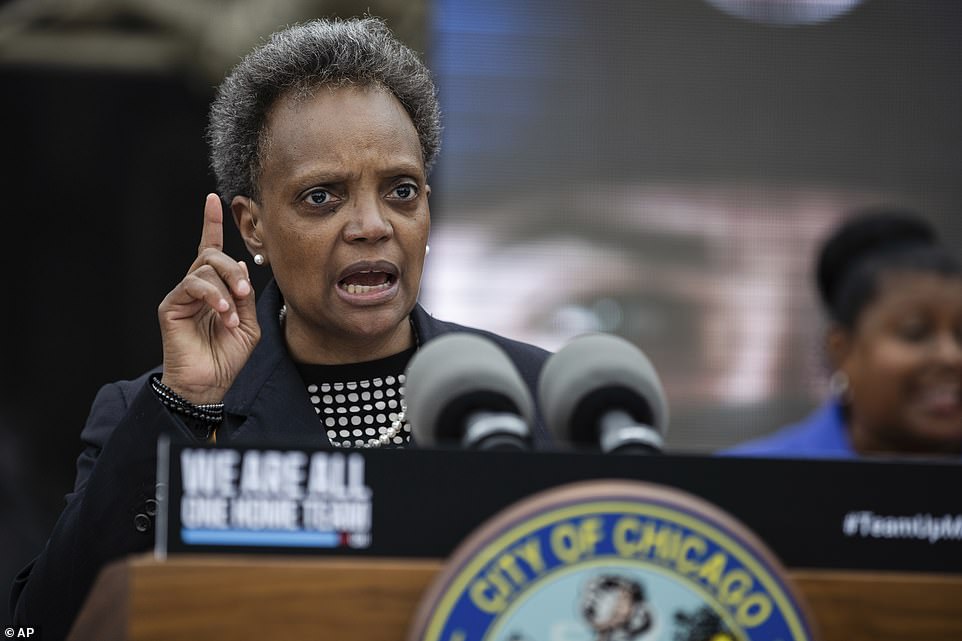 While tensions continue to bubble over in Portland, concerns are mounting that Chicago is headed the same way after Trump said he was sending in federal agents there. Chicago Mayor Lori Lightfoot vowed there would be no ‘Portland-style deployment’ of federal agents in her city

In Chicago, the agents will help local authorities battle a spate of street violence that has ripped apart families and injured young children and bystanders.

‘In Chicago the mission is to protect the public from violent crime on the streets,’ said Wolf, who has not been confirmed by the Senate for his position.

Trump during remarks repeatedly tore into local officials, blaming them for violence in their cities.

‘When they abdicate their duty the results are catastrophic,’ the president said. He repeatedly connected violent crime to left-wing policies, as he faces a stiff challenge from Democrat Joe Biden amid protests over police violence and stresses his own ‘law and order’ platform.

‘What cities are doing is absolute insanity,’ Trump said, blasting calls to defund police departments. He decried a ‘rampage of violence.’

The administration has relied on a legal justification related to protecting federal buildings for inserting Portland agents, who are opposed by local officials.

The Chicago model is to be based on ‘Operation LeGend,’ which has already been used in Kansas City.

The operation is named after LeGend Taliferro, a four-year-old boy shot and killed in Kansas City, Missouri June 29.

Trump is expanding the operation by deploying FBI and other agents to Chicago and Albuquerque to quell what he claims is out of control violence.

Lightfoot offered some off-ramp to the tensions before the formal announcement, saying a plan to surge FBI and DEA agents to help her city contend with local crime had her approval – but not an ‘undemocratic’ insertion of unidentified Homeland Security agents, as Trump has ordered in Portland.

Her statement signaled a possible de-escalation as critics fume about the Trump administration’s use of ‘secret’ Homeland Security Investigations agents who have taken part in violent clashes with protesters in Portland.

Lightfoot, who has publicly clashed with Trump , had vowed there would be no ‘Portland-style deployment’ in her city, just hours before gun violence erupted at a funeral.

Fifteen people were wounded on Chicago’s South Side in the shooting outside a funeral home Tuesday night. Police said at least 60 bullets were fired in the shootout when gunmen in a car opened fire on the funeral party, who then returned fire on the vehicle.

Violent crime is soaring across Chicago, with 12 killed in shootings and another 51 injured this weekend. 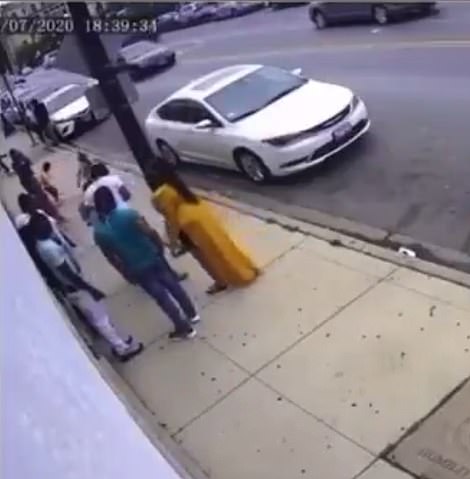 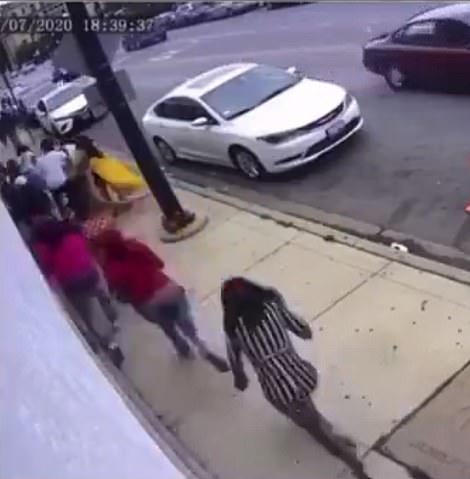 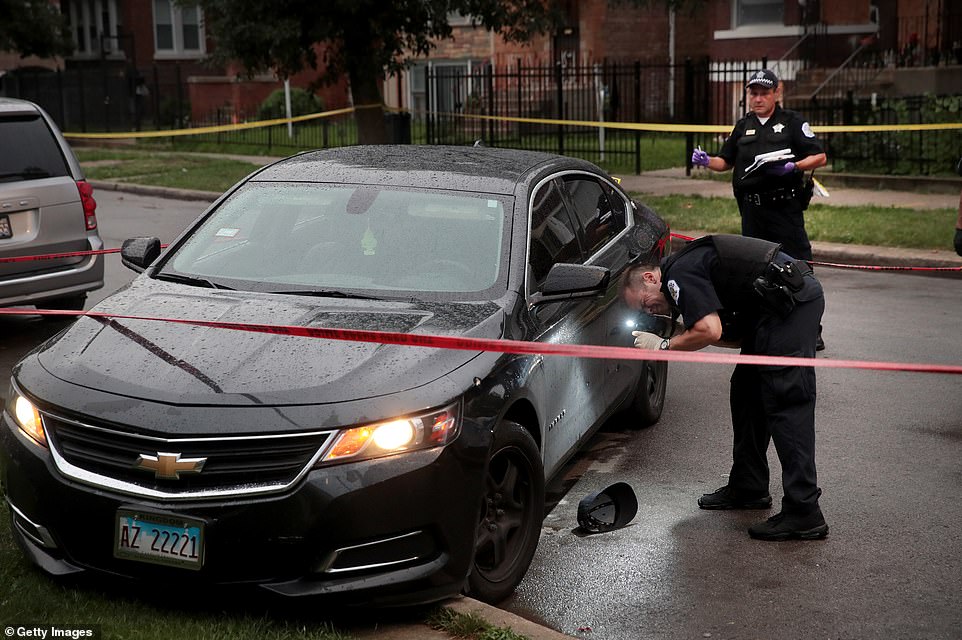 While crime has soared in Chicago – there were 116 murders over the 28 days through July 19, an increase of nearly 200 percent, police department data shows – the reason for the deployment to the New Mexico city is less clear-cut.

In Chicago, police superintendent David Brown blamed turf battles among the roughly 117,000 gang members in the city of 2.7 million people, where one shooting begets another in an endless cycle of revenge.

‘This same cycle repeats itself over and over and over again. This cycle is fueled by street gangs, guns and drugs,’ he said. ‘Too many people in Chicago have been touched by gun violence.’

Lightfoot also vowed in a tweet before that incident: ‘Under no circumstances will I allow Donald Trump’s troops to come to Chicago and terrorize our residents.’

Lightfoot tweeted after 15 were injured in a Chicago shooting Tuesday

Amid confusion about what federal agents might be sent in, Lightfoot hedged her language. DHS has refused to comment on ‘leaked’ reports about its agents being deployed.

‘What I understand at this point — and I caveat that — is that the Trump administration is not going to foolishly deploy unnamed agents to the streets of Chicago,’ she said.

‘As I understand it, what we will be getting are some additional resources in the FBI, the DEA and the ATF,’ she added.

She even described the federal help as potentially useful in combatting the city’s crime wave – which Trump made a campaign issue in 2016 and has been fuming about again.

‘What we will receive is resources that are going to plug into the existing federal agencies that we work with on a regular basis to help manage and suppress violent crime in our city,’ she said.

She said Laushch would be ‘in the loop.’ She called what happened in Portland ‘not only unconstitutional, it was undemocratic.’