Portland Thorns owner Merritt Paulson has announced that he’ll be stepping away from team operations after a shocking report on NWSL players claiming sexual abuse from coaches and staff around the league was released earlier this week.

Along with Paulson, team executives Gavin Wilkinson and Mike Golub will also distance themselves from the team after claims of sexual harassment were made against ex-coach Paul Riley, who managed the Thorns through the 2014-15 season, last year.

Findings and indicators from former Acting US Attorney General Sally Yates, who was hired by the US Soccer Federation to oversee an independent investigation regarding the allegations in October of last year, were released on Monday.

The report suggested Paulson knew and tried to cover the allegations of abuse the club had allegedly attempted to hide and that he encouraged other NWSL teams to hire Riley, of whom he once said he had ‘a lot of affection for’ in an email sent to the Western New York Flash front office in 2016. 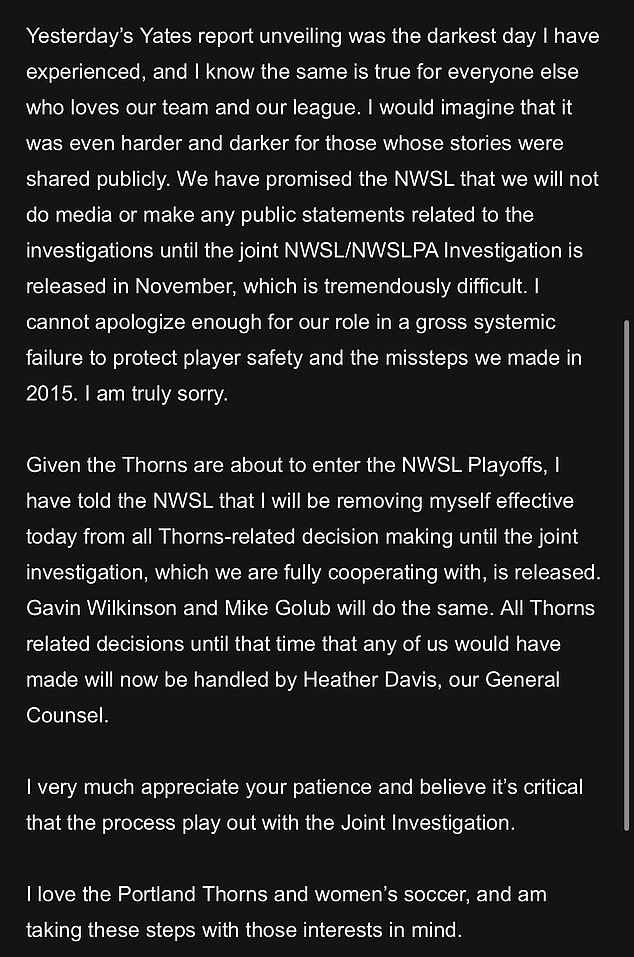 ‘Yesterday’s Yates report unveiling was the darkest day I have experienced, and I know the same is true for everyone else who loves our team and our league,’ Paulson said in a statement issued on Tuesday, announcing that we would be stepping aside from Thorns and Timbers operations 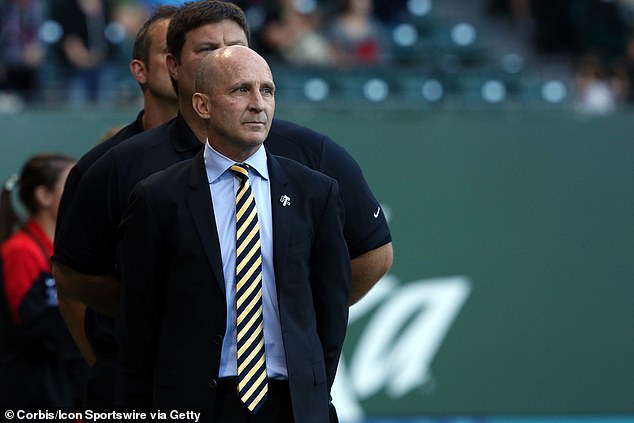 The independent investigation, headed by former Acting US Attorney General Sally Yates, said Paulson was aware of Paul Riley’s inappropriate behavior while coaching the Thorns for a year from 2014-15

‘Yesterday’s Yates report unveiling was the darkest day I have experienced, and I know the same is true for everyone else who loves our team and our league,’ a statement from Paulson, issued on Tuesday read.

‘I would imagine that it was even harder and darker for those whose stories were shared publicly. We have promised the NWSL that we will not do media or make any public statements related to the investigations until the joint NWSL / NWSLPA investigation is released in November, which is tremendously difficult.’

‘I cannot apologize enough for our role in a gross systemic failure to protect player safety and the missteps we made in 2015. I am truly sorry,’ the minority owner of Peregrine Sports LLC, which owns the Thorns and the Portland Timbers, concluded.

Heather Davis – General Counsel of the both the Timbers and Thorns – will now spearhead team operations, as a ring of changes related to the team’s front office were made on Tuesday.

US Soccer commissioned the investigation by Yates and the law firm King & Spaulding after former NWSL players Sinead Farrelly and Shim came forward with allegations of harassment and sexual coercion dating back a decade involving former coach Paul Riley, who has denied the allegations.

Their account was first published by The Athletic in September 2021.

Both Shim and Farrelly claim Riley, 58, often took them drinking and used those moments to pressure them into sex, according to The Athletic’s report. In one alleged 2012 incident, Riley, a Liverpool native who was 47 and married at the time, took Farrelly and another player to his hotel room and had sex with both of them.

Riley’s refrain, which Farrelly said she often repeated to herself after having sex with her coach, was that they would be ‘taking this to their graves.’

Among other allegations, Shim told ESPN that Riley invited her to his hotel room one evening.

‘He quickly shut the door behind me,’ Shim said. ‘I saw he was in his underwear. ‘He told me to get on bed and watch film,’ she continued. ‘There was no film pulled up. I knew at that point I had to find a way out and I was not willing to compromise myself for my career or for this person.’ 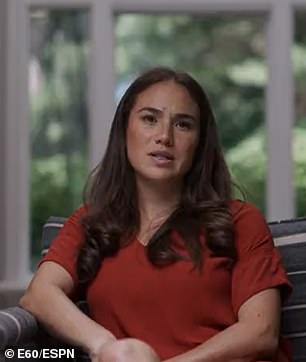 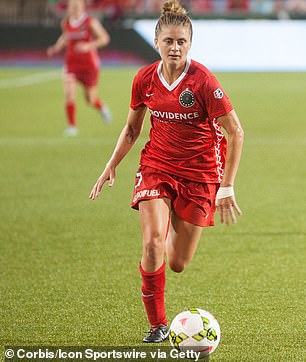 Mana Shim (left), one of the whistle blowers at the center of a growing sexual abuse scandal within women’s soccer, claims to have been sexually harassed by Riley during her time on the Thorns in the 2014-15 season, as well as Sinead Farrelly (right)

Shim says she first informed the Thorns front office about Riley’s inappropriate behavior in 2015 she discloses the coach’s ‘sexual harassment towards me’. But while the team declined to re-sign Riley when his contract expired, he was still hired by the NWSL’s Western New York Flash the following season and by the Courage in 2017

A promo for ESPN’s E:60, which will air on Tuesday evening, does not reveal what happened afterwards.

Shim says she first complained about Riley in 2015 when she played for him on the Thorns. But while the team declined to re-sign him when his contract expired, he was still hired by the NWSL’s Western New York Flash the following season and by the Courage in 2017.

The Thorns said they investigated Riley in 2015 while he was with the team and reported the findings to the league. They did not renew his contract but did not make the reasons public.

Former USWMNT striker Alex Morgan – a teammate of both victims in her two years as a Thorn between 2013-15 told ESPN that investigators spoke to her for only 20 minutes or so.

The law firm’s investigation found the Thorns were not forthcoming with certain information and they attempted to prevent investigators from using the team’s 2015 report.

Riley went on to coach the Western New York Flash, which later moved to North Carolina and was renamed.

‘She went through all the right steps, and she was failed,’ Morgan told ESPN’S E:60, referring to Shim. ‘She was failed by the system.’

When the scandal broke last year, Morgan posted to social media: ‘The league was informed of these allegations multiple times and refused multiple times to investigate the allegations. The league must accept responsibility for a process that failed to protect its own players from this abuse.’

‘The verbal and emotional abuse players describe in the NWSL is not merely ‘tough’ coaching. And the players affected are not shrinking violets. They are among the best athletes in the world,’ Yates wrote.

‘Abuse in the NWSL is rooted in a deeper culture in women’s soccer, beginning in youth leagues, that normalizes verbally abusive coaching and blurs boundaries between coaches and players,’ former acting US Attorney General Sally Q. Yates wrote in her report on the investigation.

Riley, who denied the allegations, was fired as head coach of the North Carolina Courage, and NWSL Commissioner Lisa Baird stepped down following the publication of The Athletic piece last year.

But it was clear the problems were widespread. Five of the 10 head coaches in the NWSL last season either were fired or stepped down amid allegations of misconduct.

One coach called in a player to review game film and showed her pornography instead, according to the New York Times. Meanwhile, another was reportedly known to berate his players and then quiz them about their sex lives.

Another was said to have coerced multiple players into sexual relationships and was fired by his team for the disturbing behavior but the club failed to warn another franchise when he was hired by a rival team only a few months later.

US Soccer President Cindy Parlow Cone called the findings ‘heartbreaking and deeply troubling.’ The report recounts an episode in 2013, when Parlow Cone was coach of the Portland Thorns, in which she herself experienced an inappropriate comment by a team executive.

‘I’ve been a part of this game all my life, from the youth all the way up to the professional level and an international level, so the women’s game is really important to me. And many of the players in this report I know. Many of them I coached,’ Parlow Cone said. ‘I just found it really maddening that players had to go through this.’

The report made numerous recommendations to prioritize player health and safety. Among them is the requirement that teams accurately disclose coach misconduct to the league and the soccer federation to ensure coaches aren’t allowed to move between teams. It also calls for meaningful vetting of coaches and timely investigation into allegations of abuse.

The NWSL said it was reviewing the report. The league and the NWSL Players Association are also conducting an investigation.

Parlow Cone would not speculate on possible discipline for teams across the league.

The Associated Press reached out to the Thorns, Racing Louisville and the Red Stars for comment but did not receive immediate responses.