Post-Brexit trade talks between the UK and the EU will resume later this week after Downing Street accepted an olive branch from Michel Barnier.

Number 10 said this afternoon Britain is now ‘ready to welcome the EU team to London to resume negotiations’ after almost a week of discussions being on hold amid a tense stand off.

The Government said while ‘significant gaps remain’ between the two sides ‘in the most difficult areas’ it is willing ‘to see if it is possible to bridge them in intensive talks’.

However, Number 10 also warned ‘it takes two to reach an agreement’ and it is ‘entirely possible that negotiations will not succeed’.

The decision to restart formal trade negotiations comes after Mr Barnier finally admitted this morning there will have to be ‘compromises on both sides’ for a deal to be agreed.

Trade talks have been paused since last week after the EU said the UK would need to move first to break the negotiating deadlock, prompting Boris Johnson to formally trigger preparations for a no deal split.

The Government left the door open to restarting talks but only if it received a ‘clear assurance’ from the bloc that there would be a ‘genuine negotiation rather than one side being expected to make all of the moves’.

Mr Barnier signalled this morning that the EU is now willing to make concessions in what appeared to be a last ditch bid to salvage trade discussions.

He told the European Parliament he believed an ‘agreement is within reach’ but warned ‘time is running out’ as the clock ticks down to the end of the post-Brexit standstill transition period in December. 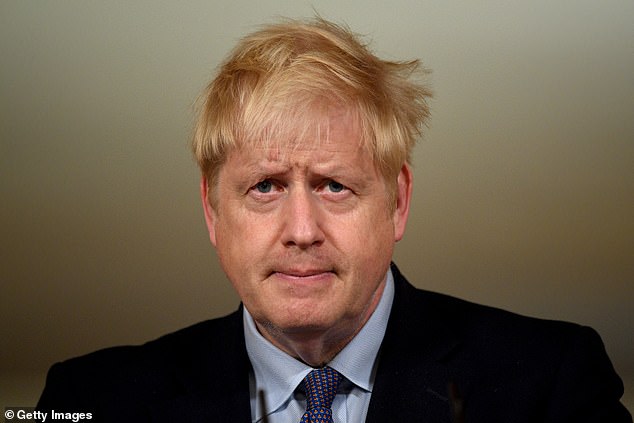 Boris Johnson paused trade talks last week as the two sides remain deadlocked. Downing Street said the EU would need to provide a ‘clear assurance’ it is willing to compromise for talks to resume

Norway and Britain have signed a temporary, limited agreement to help maintain trade in goods in case there is no final post-Brexit trade deal in place by year-end.

The Norwegian Industry ministry said today that talks to put in a place a permanent, comprehensive free trade agreement were still ongoing, the ministry added.

‘Norway and Britain realise it is unrealistic to have a deal in place by January 1 and so have put in place a temporary agreement for goods,’ the department said in a statement.

Norway said it was also considering temporary solutions for services and investments, in addition to the goods agreement announced Wednesday.

Norway is not in the European Union and Britain left the bloc on January 31, but both countries still trade under the same market rules of the European Economic Area (EEA), comprised of EU and EFTA (European Free Trade Association) member states.

A Number 10 spokesman said in a statement issued just after 5pm that the Government had ‘studied carefully’ the EU chief negotiator’s remarks and considered them to be ‘authoritative’.

Mr Barnier and Lord Frost spoke on the phone this afternoon for the third time in as many days and Number 10 said: ‘On the basis of that conversation we are ready to welcome the EU team to London to resume negotiations later this week.

‘We have jointly agreed a set of principles for handling this intensified phase of talks.

‘As to the substance, we note that Mr Barnier set out the principles that the EU has brought to this negotiation, and that he also acknowledged the UK’s established red lines.

‘It is clear that significant gaps remain between our positions in the most difficult areas, but we are ready, with the EU, to see if it is possible to bridge them in intensive talks.

‘For our part, we remain clear that the best and most established means of regulating the relationship between two sovereign and autonomous parties is one based on a free trade agreement.

‘As both sides have made clear, it takes two to reach an agreement. It is entirely possible that negotiations will not succeed. If so, the UK will end the transition period on Australia terms and will prosper in doing so.’

The Government has repeatedly described leaving the EU without a trade deal as an Australia-style arrangement but critics insist that is just a nicer way of saying there will not be a trade accord in place.

Mr Barnier had paved the way for talks to resume after he told MEPs the EU’s ‘doors will always remain open, right up until the very end’ as he urged the UK to return to the negotiating table.

He said: ‘We will seek the necessary compromises on both sides in order to do our upmost to reach an agreement and we will do so right up until the last day that it is possible to do so.

‘Our doors will always remain open, right up until the very end. But as has been said… we will remain firm.

‘We are ready to discuss al subjects on the basis of legal texts. We are here to negotiate an agreement, an international treaty and that is a legal document, a legal instrument.’

Mr Barnier insisted he still believed a free trade deal can be struck between the two sides in the coming weeks.

‘Despite the difficulties we have faced an agreement is within reach,’ he said.

‘If both sides are willing to work constructively, if both sides are willing to compromise and if we are able to make progress in the next few days on the basis of legal texts and if we are ready with the next few days to resolve the sticking points, the trickiest subjects because time is of the essence and time is running out each and every day.’

On the crunch issue of post-Brexit fishing rights, one of the main stumbling blocks to a deal, Mr Barnier said: ‘There will not be a trade deal without a fair solution for fishermen on both sides.

Meanwhile, European Council President Charles Michel said ‘we want a deal but not at any cost’ as he told the UK: ‘You can’t have your cake and eat it too.’

Number 10 initially responded to Mr Barnier’s remarks at lunchtime by saying they had been ‘noted with interest’ and were being considered before it then made the announcement this afternoon that discussions will get back under way.

Downing Street had set out its stall yesterday as it said the EU needed to ‘fundamentally change their approach’ and ‘make it clear that they have done so’.

The Prime Minister’s Official Spokesman said the UK needed to see ‘a clear assurance from the EU that it has made a fundamental change in approach to the talks and that this is going to be a genuine negotiation rather than one side being expected to make all of the moves’.

Mr Barnier’s intervention came after Mr Johnson and Michael Gove, the Minister for the Cabinet Office, held a call with business leaders last night to urge them to step up their preparations for a no trade deal split from the bloc.

However, some of the participants on the call were left distinctly unimpressed as they told the BBC that it ‘felt like a box ticking exercise’ rather than an attempt at genuine engagement.

Mr Gove reportedly told those on the call that the end of the transition period would be ‘a bit like moving house – a bit of disruption till you get used to a bigger and better house’.

Mr Johnson had set a deadline of agreeing a broad outline of a deal with the EU by last week’s European Council summit.

But the two sides remain deadlocked in a number of key areas, including on fishing but also on the so-called ‘level playing field’ on regulations and on the governance of the agreement.

EU leaders said they were willing for talks to continue but refused to give any ground as they told the UK it had to make the next move.

That prompted Mr Johnson to pause official talks and formally activate preparations for the UK to split from the bloc without a trade accord in place at the end of the year.