An Australia Post worker has been suspended after he was filmed dumping postal vote applications into a grandmother’s wheelie bin, before allegedly offering her a bribe.

The irate resident confronted the postie, who then allegedly offered her $10 before she yelled at him, ‘no, don’t give me nothing mate, don’t bribe me’.

The incident happened in the electorate of Blair, west of Brisbane, which is a marginal seat held by Labor’s Shayne Neumann.

Ms Weller was angry the postie was putting the letters in her bin and said they were crucial for postal voters.

‘That was all important mail for people wanting to go do a postal vote, they’ll be waiting for them and they won’t receive it because they were all dumped in my bin,’ Ms Weller told  A Current Affair.

The postal worker initially denied having dumped the mail in her bin, before returning to apologise after Ms Weller told him she had captured him on her CCTV.

The footage revealed the worker opening his wallet, and offering her the $10.

Ms Weller responded: ‘No, don’t give me nothing mate. Don’t bribe me. Go f— off.’

The grandmother said she was ‘totally degusted’ with the postman’s actions and called her local LNP Senator Paul Scarr, whose office the letters had been mailed from.

Ms Weller told the Today Show on Saturday the senator ‘was livid’ and ‘couldn’t believe it’. 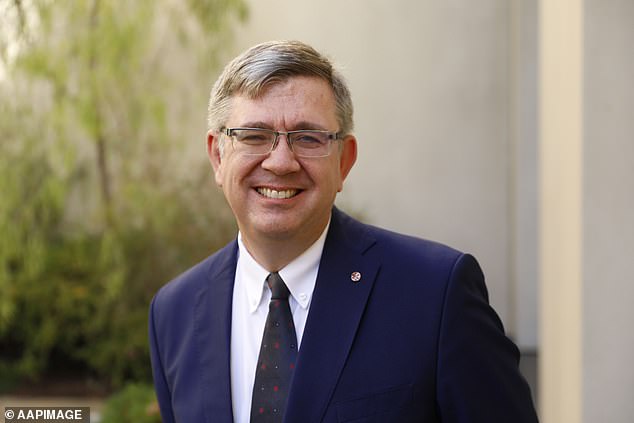 LNP senator Paul Scarr (pictured) was ‘livid’ that mail from his office had been thrown in a bin and called for an investigation, speculating on how widespread the practice could be

The LNP senator said he was ‘disappointed’ and suggested the postal vote application letter dumping could be rampant.

‘I think people have a right to expect better from Australia Post … and it raises a lot of questions in my mind, how widespread is it,’ Mr Scarr said.

‘I expect as a customer of Australia Post, for them to deliver the mail, and I don’t think that’s too much to ask.’

The senator has called for Australia Post to do a thorough probe into the matter, as they were contracted to carry out the application deliveries for $13,000.

Australia Post Group CEO Paul Graham said they had suspended the worker, pending the outcome of an internal investigation, and are working with police.

‘We are working with the LNP to deliver these mail items as a priority. We take full responsibility and apologise unreservedly,’ his statement said.

The Australian Electoral Commission said the incident ‘has no effect on the operation of the election whatsoever and that voters can access in-person voting’.

Those needing a postal vote can apply via the AEC website directly.

Postal votes are expected to surge this year, with voters keen to avoid crowds and long queues in the looming May 21 federal election – the first since Covid hit the country.