Postman, 45, digs up battered handbag and reunites it with librarian who was mugged 40 years ago

A kind-hearted postie reunited a woman with her stolen handbag 40 years after she was mugged – which he dug up while planting daffodil bulbs.

Mike Izzard, 45, was digging by a disused railway station in Herfordshire, that he has been voluntarily renovating for three years, when he hit something solid in the mud.

First finding an old halfpenny coin, he dug deeper and found the leather bag along with another 7p in coins and a front door key.

He then discovered a Midland Bank cheque card and an Access card dated 1979-1981 with the name Angela Dimond on it.

After posting pictures of his incredible find on social media, he found Angela still lived less than two miles away and returned it to her the same day.

Mike from Hatfield, Herts., said: ‘It’s like something from a movie script, it’s just bizarre.

‘Not only to locate her but to hand it back on the same day, that’s just incredible.

‘I could have put that spade in anywhere, so the odds are just unimaginable.’

At around 1.30pm on Tuesday, Mike went to plant the bulbs by a bench on a cycle path near Nast Hyde Halt station which he has been restoring for the community for three years.

The married postman of 22 years said: ‘I got down about 4ins and a small coin came out. It was a halfpenny piece.

‘I had not seen one of those for a while, so I carried on digging and another few coins come out. 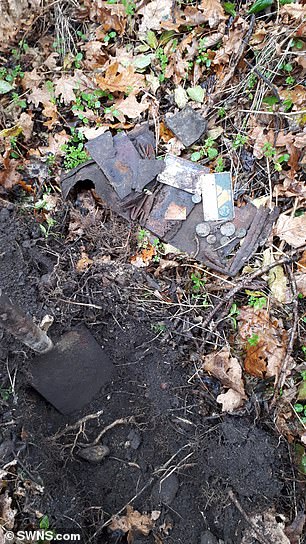 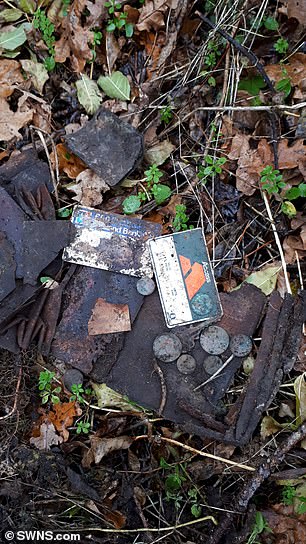 The postman found an old halfpenny coin, another 7p in coins (pictured on the floor) and a front door key. He also discovered a Midland Bank cheque card and an Access card dated 1979-1981 with Angela’s name on it 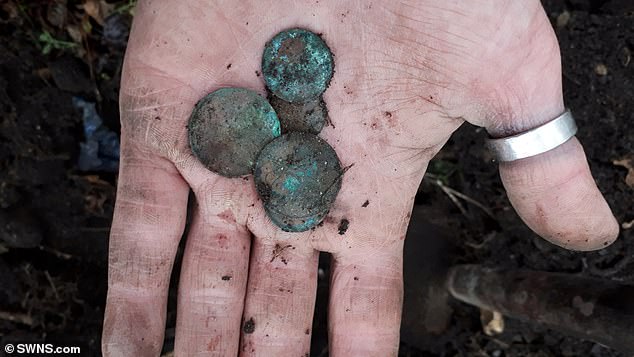 Finally finding the bag and a door key, Mike posted pictures of all the items on Facebook and got an ‘overwhelming response’.

After making contact with Angela, he was at her home by 7pm to present her with the possessions.

Angela, now 63, revealed to Mike that she had lost the handbag aged 25, after being mugged close to the former station in 1980.

The university librarian from Hatfield said: ‘I just got to near the bridge on the Alban Way and somebody came out of the bushes, snatched my bag and ran off with it.’

She said she was proud of the cream-coloured leather handbag at the time, and was ‘gutted’ to have it stolen.

She reported the theft to the police but the criminal was reportedly never caught.

Angela said she had avoided the area round the station since, but added she would go back to see Mike’s renovation work.

She said: ‘They say there’s a silver lining to everything, but this one took a while.’

Mike added: ‘She invited me round for a cup of tea and I gave her the goods.. We had a lovely chat. These sorts of things live with you forever.’