The world is now regularly getting so hot and humid during heatwaves that some locations surpass the ‘theoretical human survivability limit’.

Doomsday predictions made by scientists expected this to happen due to global warming, but not for several decades.

But a study found parts of the world have already become so hot and humid during heatwaves that sweating becomes futile and the body is unable to cool down.

If a person was left outside for several hours in these conditions, they would eventually die.

The combination of extreme heat and high levels of humidity creates what is called a ‘wet bulb temperature’.

A wet bulb temperature of 35°C is deemed potentially fatal to humans and it was previously believed it was impossible for anywhere on Earth to reach this dangerous level of heat and humidity.

However, the latest research reveals 14 occasions where this lethal combination was reached in the UAE, Saudi Arabia and Qatar since 1979.

‘Previous studies projected that this would happen several decades from now, but this shows it’s happening right now,’ said lead author Dr Colin Raymond from the California Institute of Technology.

‘The times these events last will increase, and the areas they affect will grow in direct correlation with global warming.’

In Bangladesh, one of the most vulnerable countries, a crew excavates a riverbed for a new bridge. Outdoor labour is a way of life in many of the regions subject to the worst heat and humidity

A so-called ‘wet-bulb temperature’, which factors in humidity, of 35°C can be fatal after a few hours to even the fittest person.

The 35°C wet bulb temperature is rarely reached, but a reading of 32°C or 33°C can also be fatal if people are exerting themselves for long periods of time.

Heatwaves which reached these dangerous conditions have more than doubled since 1979, according to the new research.

Wet bulb temperature is sometimes used on weather forecasts as the ‘heat index’ or ‘real-feel’ temperature.

Under these conditions, sweating becomes futile as the air is already saturated with moisture and therefore beads of perspiration do not evaporate.

This can then trigger a chain reaction which leads to unabated internal warming, overheating and potentially heat stroke. In serious cases it can be fatal.

Readings approaching or exceeding 30°C on the wet bulb have doubled since 1979.

The number of readings of 31°C, which was long believed to be a rare event, happened more than 1,000 times, the study shows.

The stifling heat experienced at a wet bulb temperature of 33C° was identified 80 times. It was previously deemed to be almost non-existent.

According to researchers from Columbia University, more than a dozen recent measurements in the Persian Gulf surpassed the theoretical human survivability limit of 35°C. On the ‘real-feel’ scale this equated to around 160°F, or 71°C, the study claims.

‘It’s hard to exaggerate the effects of anything that gets into the 30s [on the wet bulb temperature scale],’ said Dr Colin Raymond, of the California Institute of Technology, Pasadena, who was involved in the research. 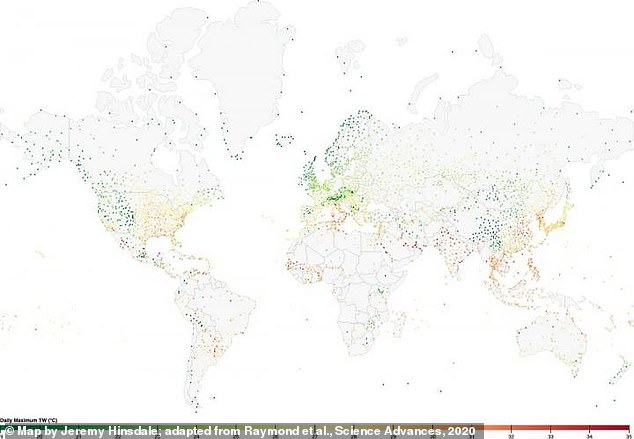 A new study shows that extreme, sometimes potentially fatal, mixtures of heat and humidity are emerging across the globe. This map shows documented instances, with hotter colours from yellow to red signifying the worst combinations as measured on the ‘wet bulb’ scale 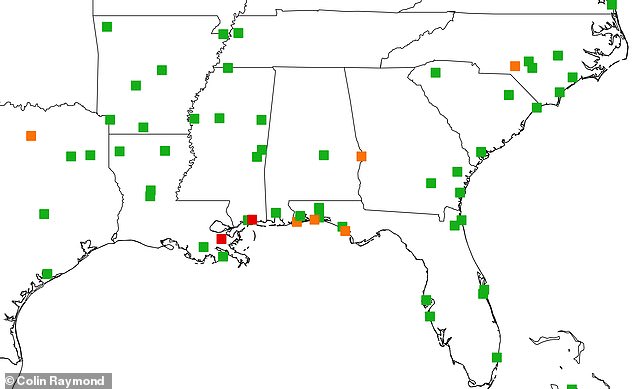 Areas in the U.S. Southeast where heat/humidity mixtures have driven temperatures to ‘wet-bulb’ readings of 31°C (equivalent to 125 degrees F on the ‘real feel’ heat index). Green markers showplaces where this has happened once between 1979 and 2017; orange, 3; red, 10

WHAT IS WET BULB TEMPERATURE?

‘Wet bulb temperature’ (TW) is measured by attaching a wet cloth to the bulb of a thermometer.

It is a direct indicator of how well sweating is cooling the body.

It alters according to real temperature and humidity but if the TW peaks above 103°F, the body can no longer cool itself.

These are then defined as ‘dangerous’ by the U.S. National Weather Service and if it hits 124°F or above, it poses an extreme danger.

Heats and humidity causing a ‘wet bulb temperature’ of this enormity can result in heat stoke which can in turn trigger damage to the brain, heart, kidneys and muscles.

At an actual temperature of just 90°F, if the humidity rises to 95 percent, it can reach the 124°TW threshold for ‘extreme danger.’

However, if humidity remains low, say around 45 per cent, the actual temperature would need to soar to a roasting 104°F before the ‘extreme danger’ boundary was met.

A so-called ‘wet-bulb temperature’, which factors in humidity, of just 35°C can be fatal after a few hours to even the fittest person.

The 35° wet bulb temperature is rarely reached, 32° or 33° can also be fatal if people are exerting themselves for long periods of time.

Wet bulb temperature is sometimes used on weather forecasts as the ‘heat index’ or ‘real-feel’ temperature.

The outbreaks have so far been confined to localised areas and lasted only for a matter of hours. However, they are now increasing in frequency and intensity, the authors warn.

‘However, a comprehensive evaluation of weather station data shows some coastal subtropical locations have already reported a TW of 35°C and that extreme humid heat overall has more than doubled in frequency since 1979.’

Dr Raymond adds: ‘Heat and humidity beyond what the human body can tolerate is emerging ahead of projections.’

The analysis is the first to show wet-bulb temperature in some places has already exceeded 35°C, at which people can no longer regulate their own body heat.

The study gathered hour-by-hour data from 7,877 weather stations between 1979 and 2017 and looked for periods of extreme weather.

Dr Matthews also found dangerous bouts of over 27°C have more than doubled since 1979.

These extreme temperatures were not identified previously because occurrences were brief and highly localised.

The full findings were published in the journal Science Advances.