A potentially hazardous near-Earth object located 750 light-years from our planet is spinning at a faster speed each year that could eventually shift its trajectory in the solar system – but this will take thousands, if not millions, of years.

Phaethon, named after the son of the sun god Helios in Greek mythology, completes a single rotation in about 3.6 hours, but the new findings show it is shaving off four milliseconds each year.

The asteroid is just the 11th with a measured change in its rotation period and it is also the largest of the group.

The discovery was made when a shape model of Phaethon did not line up with its real light curve observations, leading astronomers to suspect only one thing – that its rotation period is slightly changing.

The team observed Phaethon’s rotation speeding up from the first observations in 1989 to the those collected in 2021. The drop in the table shows the rotation is shorter

The research was conducted by scientists led by Arecibo Observatory and the University of Central Florida and although Arecibo is no longer in operation, the data it collected before the 2020 collapse is still providing new findings.

Formally known as 3200 Phaethon, the asteroid made its closest pass of Earth in 2017, coming within 6.4 million miles, and is expected to return in 2093 when it will come 1.8 million miles from our planet.

The 2017 event was captured by Arecibo, collecting a set of radar images that show the asteroid is shaped like a spinning top and features an extremely blue spectrum – a rarity among asteroids.

Astronomers combined these observations with others from 2007, along with stellar occultations from 2019 through 2021 and light curves from many apparitions that spanned from 1989 through 2021.

This data was then used to create a model of Phaethon’s shape and rotation state.

Dr Sean Marshall, a planetary scientist at Arecibo Observatory, shared in a statement: ‘The earliest available light curve of Phaethon is from October 9, 1989.

‘We initially considered that Phaethon’s rotation period may have changed before the 2021 observations, perhaps due to activity when it was near perihelion in December 2020. 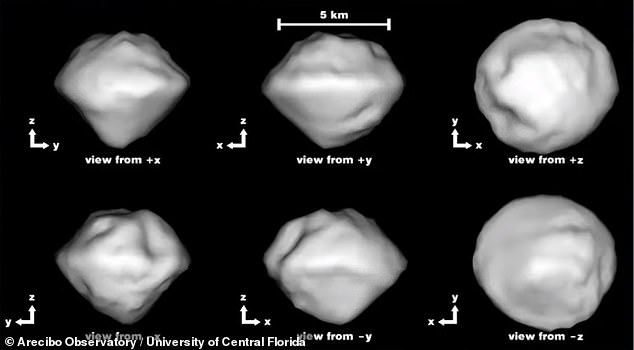 Phaethon completes a single rotation in about 3.6 hours, but the new findings show it is shaving off four milliseconds each year

Discovered in 1983, Phaethon has been shown to be the parent body of the Geminid meteor shower.

Instead it is an active asteroid with confirmed dust ejections.

It also has a surprisingly blue color.

The fact that its reflected light is strongly polarized is one more mystery surrounding this curious asteroid.

‘However, we found that a constant rotational acceleration provides a good fit to all of the data from 1989 through 2021, clearly accounting for the discrepancies seen in 1989 and 2021 while also slightly improving the model’s agreement with the data during other apparitions.’

Marshall said that the team has considered several mechanisms that could cause the acceleration, including radiation, but none are strong enough to force such a change.

Phaethon was discovered by Simon Green and John Davies in 1983 in data from the Infrared Astronomical Satellite (IRAS) – the first asteroid to be discovered in spacecraft data.

It was then determined to have originated from the Geminid meteor shower that is typically visible from Earth in mid-December.

And At three miles wide, the asteroid is roughly half the size of Chicxulub, the rock that wiped out the dinosaurs.

In a 2017 statement, Immanuel Kant Baltic Federal University said: ‘Apparently, this asteroid was once a much bigger object. 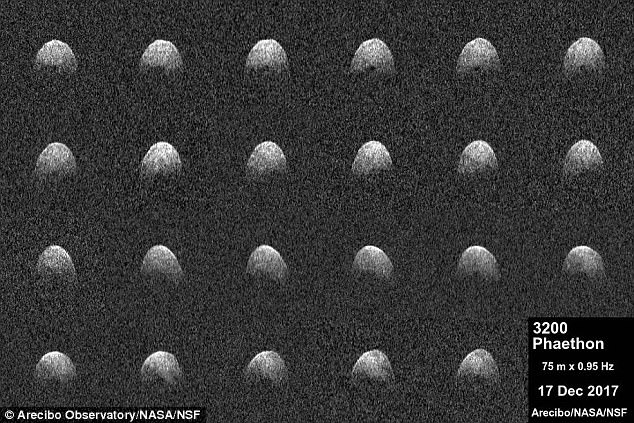 ‘The asteroid’s extremely elongated orbit, thanks to which it sometimes gets to the Sun closer than Mercury and it sometimes moves away farther than Mars, is another argument in favor of this theory.’

The Japan Aerospace Exploration Agency’s DESTINY+ probe is scheduled to launch this year to take pictures as it flies by Phaethon to help astronomers better characterize its surface geology.

This is an exciting mystery for the recently approved DESTINY+ mission to investigate when it flies past Phaethon.

The way an object reflects light depends not only on its albedo (the percentage of light it reflects) but also on the illumination angle.

One particular effect that scientists are interested in is how the polarization changes when sunlight reflects off the surface of an asteroid.