Pound hits 22-month peak against the Euro on Brexit news

The British pound hit a 22-month peak against the euro tonight after Theresa May said she had secured ‘legally binding changes’ to her Brexit deal.

Sterling peaked at €1.17 in the moments after David Lidington announced the Brexit breakthrough in the House of Commons.

The rise took the pound to its highest level since the spring of 2017, before Mrs May lost her majority at the snap general election.

Investors will have to wait until Tuesday to see whether the changes to the Brexit deal are enough to take Mrs May’s agreement over the line in the House of Commons.

Prime Minister Theresa May said she ‘passionately believed’ in her Brexit deal and had now addressed the concerns raised by Parliament in January over the Northern Irish backstop.

She said she had ensured there would be ‘no indefinite backstop’ and any attempt to keep the UK in the backstop by the EU would be dealt with by an ‘arbitration mechanism’.

‘It is in this spirit that today the Prime Minister and I have agreed on a joint legally-binding instrument relating to the Withdrawal Agreement. This instrument provides meaningful clarifications and legal guarantees on the nature of the backstop.

But Labour’s shadow Brexit secretary Sir Keir Starmer said the change ‘adds nothing’ from the letter Mrs May returned from negotiations with on January 14. 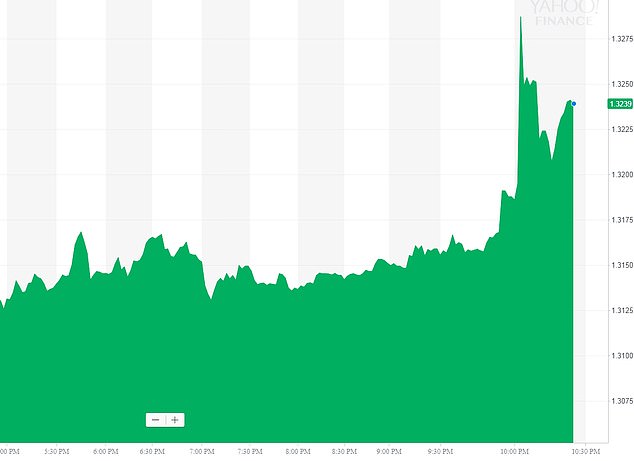 He said: ‘If all that’s happening is to turn this letter into an interpretative tool for legal purposes, I remind the House what the Prime Minister said on January 14 about this letter.

‘She said she had been advised this letter would have legal force in international law.

‘To stand here today and say this is a significant change when she’s repeating what she said on January 14 is not going to take anyone here far.’

‘This evening’s agreement with the European Commission does not contain anything approaching the changes Theresa May promised Parliament, and whipped her MPs to vote for.

‘Since her Brexit deal was so overwhelmingly rejected, the Prime Minister has recklessly run down the clock, failed to effectively negotiate with the EU and refused to find common ground for a deal Parliament could support.

‘That’s why MPs must reject this deal tomorrow.’