The pound plunged against the world’s major currencies this afternoon as investors bet that the UK is set to crash out of the European Union without a deal after Theresa May revealed the extent of the ‘impasse’ at the Salzburg negotiation.

The Prime Minister hit out at her counterparts for lacking ‘respect’ as she vowed defiance despite being brutally ambushed at the summit when counterparts condemned her Chequers plan.

Continuing a rollercoaster week, the sterling fell by more than a cent the dollar to  $1.307, and against the euro it fell by a cent to €1.110.

In a statement in Downing Street, she admitted that the two sides were still a ‘long way apart’ and at an ‘impasse’. But she warned that the leaders were ‘making a mistake’ if they thought she would back down on her red lines.

‘As I told EU leaders, neither side should demand the unacceptable of each other. We cannot accept anything that does not respect the result of the referendum,’ she said.

‘This is seen as a major setback for May, ahead of next week’s party congress where she is expected to be pressured from internal critics (pressing) for a harder exit,’ SEB analysts wrote in a research note.

The pound has now given up gains it made this week on the back of a higher-than-expected inflation figure and strong retail sales data.

Retail sales jumped 3.3 per cent in August compared to the same month a year earlier, with households spending more on food and household goods than last summer. That spurred the otherwise volatile pound, which rose by a cent against the dollar to 1.321 and by half a cent against the euro to 1.130. 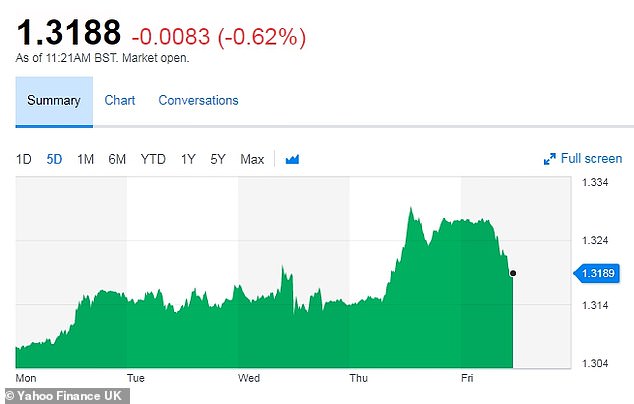 Continuing a rollercoaster week, sterling retreated by nearly a cent against the dollar to go back below $1.320 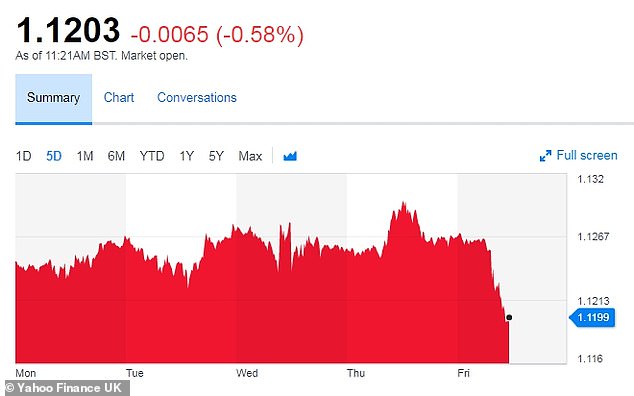 Sterling also rose earlier in the week when inflation data showed prices rising faster than had been expected. That saw traders shortening the odds on another rate rise before Brexit and buying the pound.

The Office for National Statistics retail data showed retail sales rose by 0.3 per cent in August from July, which was significantly better than the 0.2 per cent fall that a Reuters news agency survey of economists had forecast.

Sales of household goods jumped by 4.5 per cent while other non-food stores enjoyed a 2.8 per cent rise, however food sales fell by 0.6 per cent and clothing fell by 1.9 per cent. 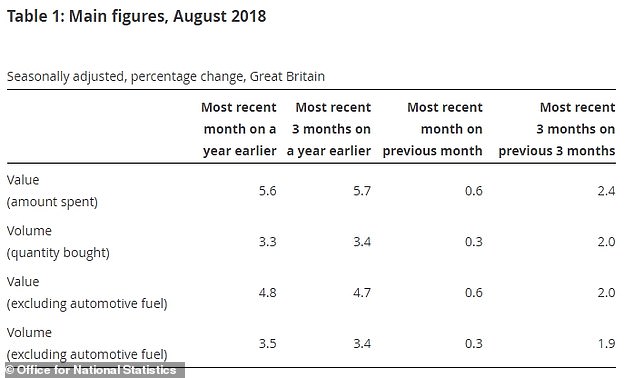 Sales volumes in August were 3.3 per cent up on the same month last year. 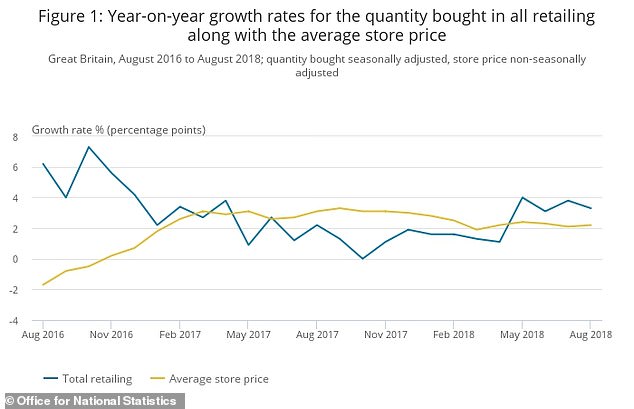 Store prices have increased at a steady annual rate of 2-3 per cent since February.

The last three months of summer from June to August saw sales rise by 3.4 per cent compared with the previous summer, with food and household goods stores doing well in the warm weather.

‘Food and household goods stores particularly benefited from the warm weather when compared with last summer. 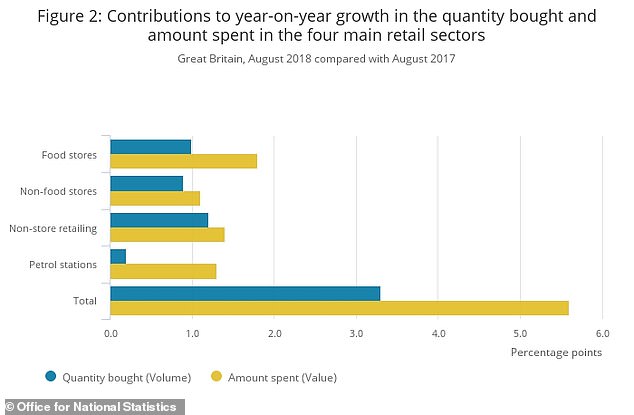 Food sales were well up in August on the same month last year, as were non-food sales. 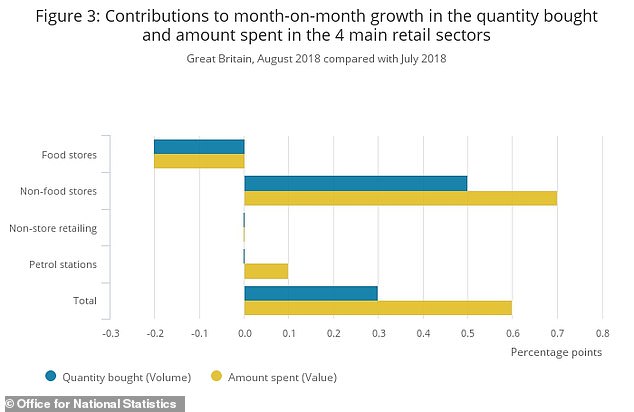 But food sales were down in August compared to a hot July.

‘The figures for the month of August were a little more mixed, with food sales falling after strong sales earlier in the summer, and clothing sales declining following a strong July, as suggested by clothing retailers. On the other hand, household goods grew strongly.’

Tom Stevenson, investment director for Personal Investing at Fidelity International, said that this week’s data increases the Bank of England’s interest rate dilemma, ‘and, at the margin, make a rate hike later this year more likely’.

‘However, the Bank of is likely to remain focused on the high degree of Brexit uncertainty and tread carefully,’ he added.

‘Looking further ahead, the pain for bricks-and-mortar retail is far from over as the growth of e-commerce continues.

‘However, it would be wrong to assume there can be no winners at all in this environment, even among those companies with their roots in shops. It really does pay to take an active approach and carefully look under the bonnet to see what steps retailers are taking to adapt to the chillier climate.’