Climate change farce: How every Australian household contributes $200 a year to those lucky enough to be able to afford to put solar panels on their roof

Subsidies to pay for solar panel installation are set to add almost $200 to power bills across Australia.

The federal Small-scale Renewable Energy Scheme together with state rebates – used to pay for subsidies to homeowners for installing solar panels – are set to rise by 45 per cent.

The cost to each household for the subsidy will soar from $134 in 2018 to $195 this year, The Australian reported.

More than two million Australians use solar energy in their homes, and capacity is growing at 50 per cent each year.

Energy Minister Angus Taylor said the cost of small-scale technology certificates – used as an incentive for homeowners to install solar panels – made up three per cent of an average power bill.

Small-scale technology certificates are given to consumers installing solar panels and are then bought back by power companies.

Mr Taylor said Australia’s biggest electricity retailers such as Origin, AGL Energy and EnergyAustralia were responsible for a bigger part of power bills.

‘The big cost is the profits being taken by the big energy companies in the wholesale market, without innovation or new products, and it is time for them to deliver a fairer deal for their customers,’ he said. 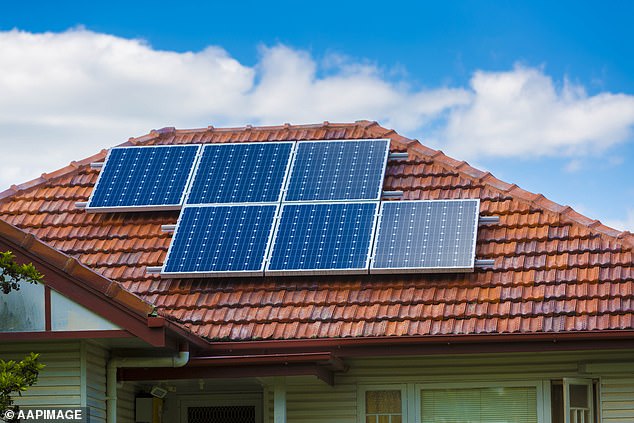 More than two million Australians use solar energy in their homes, and capacity is growing at 50 per cent each year

‘According to the Australian Energy Market Commission, the small-scale technology certificate cost is less than three per cent of the bill, whereas 46 per cent is going to the big generator retailers.’

Solar panels are growing in popularity, with state governments offering incentives for installing them.

Victorians can set up solar in their homes for half the usual price under a scheme introduced by Premier Daniel Andrews’ government, while in New South Wales Labor plans for 500,000 homes to have renewable energy technology in a capped rebate program.