A woman who broadcast her arrest live on Facebook Thursday for walking and jogging through the quaint Florida coastal town of Stuart while suspected of being infected with COVID-19 has tested negative for the virus, she told DailyMail.com in an exclusive interview.

During the interview about her arrest, Melissa Barton, 38, received a message on an app she downloaded when she was tested March 23 at a drive-through site, and it read: ‘Your COVID testing was negative.’

Barton, a public relations executive, briefly screamed her happiness then went off on what she says is turning into a police state.

‘Now I’m scared for my health because Stuart Police forced me to be in contact with people during and after the arrest,’ she said. ‘I have underlying health issues and they take me to jail. If I don’t have coronavirus now, maybe I caught it in police custody.’

Melissa Barton, 38, was arrested Thursday for walking and jogging through a Florida town while suspected of being infected with coronavirus 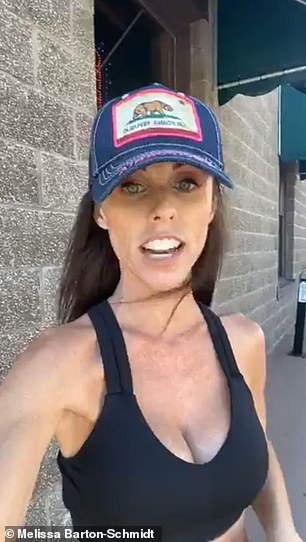 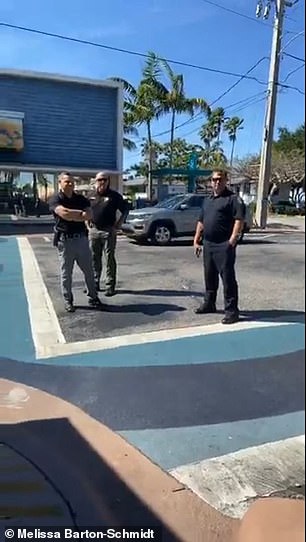 Barton says four to five police officers surrounded her in the historic downtown Stuart Thursday afternoon after a business owner who spotted her on the street called 911 to report that a woman believed to be suffering from the deadly respiratory illness was walking around.

Police confirmed Friday a ‘concerned business owner’ reported Barton, adding Barton had said on Facebook she thought she was positive.

Barton said she suspects the owner of a restaurant she frequents retaliated against her lack of desire to hook up with him by calling police. 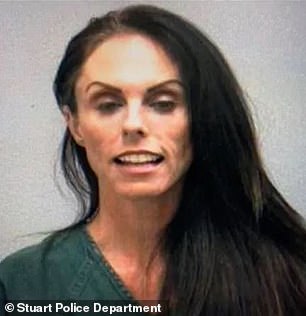 Police confirmed Friday a ‘concerned business owner’ reported Barton, adding Barton had said on Facebook she thought she was positive (pictured in her mugshot)

‘He keeps asking me out, and I keep saying no,’ she said.

The incident report mentions she entered in several shops that are still open during her walk.

‘I followed the letter of the law and my government failed to protect me,’ she added. ‘We are losing our liberties. Citizens are now ratting out other citizens they don’t like. That’s crazy.’

The Facebook Live footage of her arrest, meanwhile, is spreading online.

At one point, one cop can be heard calling the mother of three a ‘crazy a**’ while a female captain is referring to her as a ‘chick.’

And then, the police officer who took her to jail forgets to turn off the Facebook Live broadcast, so viewers were treated to her conversation with the officer. He finally turns off the phone after he and Barton arrive at the jail.

Barton says her troubles stem from her self-quarantine started March 18.

‘I felt sick and I had that diarrhea and headaches that everybody’s talking about,’ she said. ‘So, I figured I’d stay home and see what happens.’

Barton said she called the local hospital several times for a test but kept getting turned down.

‘They said I wasn’t old enough, and I didn’t travel, and some symptoms weren’t right,’ she said.

To break the monotony of the quarantine, Barton started posting Facebook Live videos documenting her ordeal.

In one, she says she assumes she was infected with the virus. ‘I called again on March 23, they finally told me to go get tested,’ she said.

She also did a Facebook Live from the testing drive-through.

Barton then stayed home and called the hospital on April 2 to ask about her test.

‘They told me it could take a month for the result, if I ever get the result because they’re so backed up,’ she said. ‘I asked the nurse if I can start jogging and walking outside and she said yes, for as long as I go out alone.’

During an interview with DailyMail.com she received a message that read: ‘Your COVID testing was negative’ 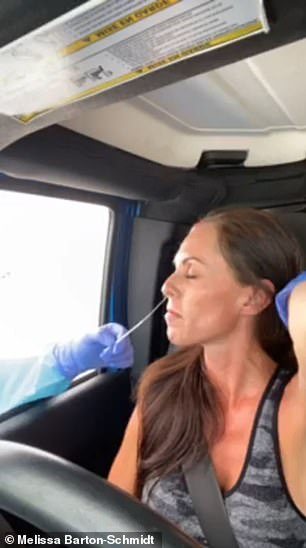 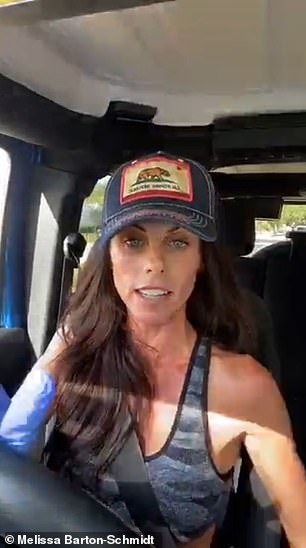 She was tested on March 23 at a drive-through site and was awaiting results. She documented the testing process

The arrest came hours later in downtown Stuart, on the two-week anniversary of her self-quarantine day.

She described how she noticed an SUV, unmarked, following her. Then, she said, two men in plain clothes came out and started walking towards her.

Eventually, they turned on their blue lights, and she turned on Facebook Live on her cellphone.

‘You guys, live, our liberties are being taken away,’ she says to her followers on the footage. ‘Share this right now. I’m a suspect for being a corona victim. I’m being detained for going on a walk.’

At one point, the camera shows Stuart Police Capt. Heather Rothe on the phone, then she asks Barton: ‘Have you been on social media saying you’re positive?’

Barton responds: ‘That’s not what I said. I said I had symptoms, but I never said I was positive … because of our government’s failure to properly test. This is not me. It’s your president. I have done nothing wrong.’

Eventually, Rothe appears to call the hospital and obtains the date when Barton took her test.

While the cops are checking Barton’s social media, she takes them to task for not respecting social distancing and not wearing any protective gears.

‘Don’t get tested, y’all, this is what happens if you get tested,’ Barton says on the video as the police officers appear not to know what to do.

After about 10 minutes, Barton is cuffed without anyone reading her Miranda Rights or being told what she is charged with.

‘Shut up, you crazy a**, tired of listening to you,’ one of the officers says. 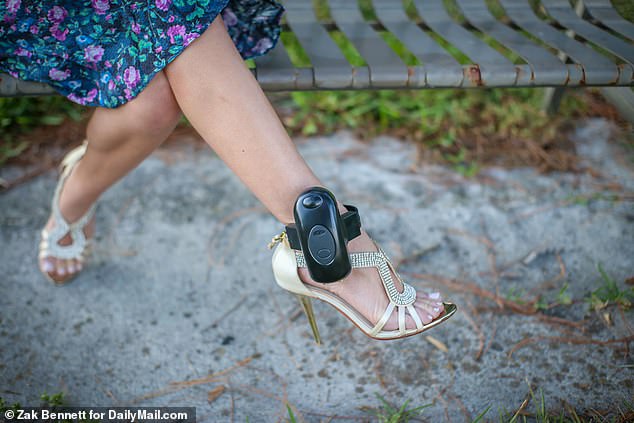 ‘I’ve never been in trouble for anything,’ Barton said. ‘I’m sitting here at home with a GPS bracelet and I can’t even walk out to my mailbox’ 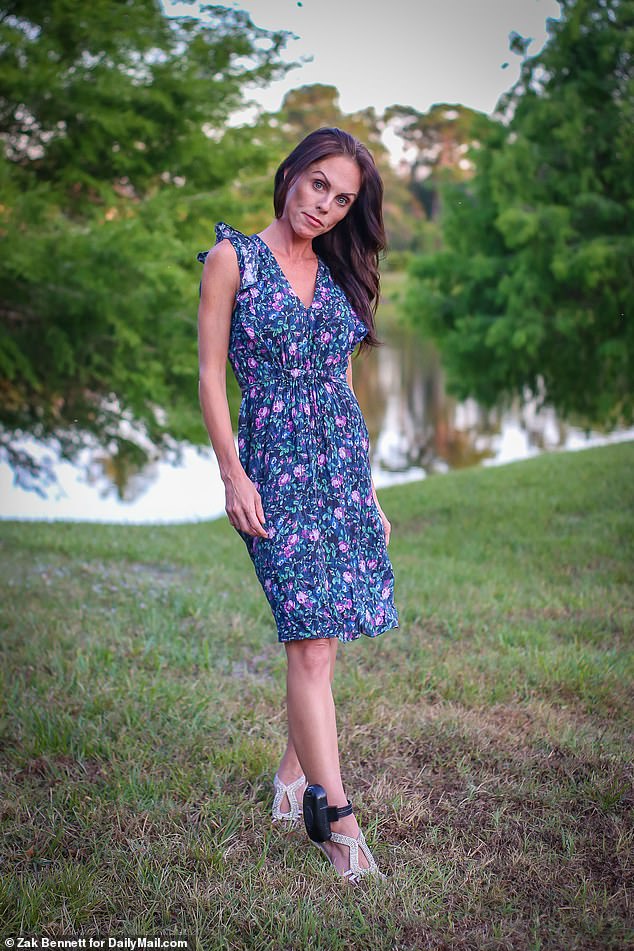 Once in the back of the police car, her cellphone continues to broadcast as she tells her story to the officer taking her in.

‘Do I look like I’ve got COVID to you?’ she asks the officer.

‘I don’t know what it looks like,’ the cop responds.

At one point, the officer receives a call from a colleague on speaker phone and he’s told: ‘Hey, she’s still live on Facebook.’

Barton then starts asking her followers to come bail her out.

In the end, Barton was charged with disorderly conduct and violation of the Florida governor’s order on quarantine.

She was released on her own recognizance with a GPS tracker and an order to not go outdoors, even to hang out in her.

‘I’ve never been in trouble for anything,’ Barton said. ‘I’m sitting here at home with a GPS bracelet and I can’t even walk out to my mailbox.’

Stuart Police spokesman Brian Bossio defended the arrest, and the professionalism of his department.

‘We don’t want to arrest people for this,’ he said. ‘Our preferred response is one of compliance.’