Twitter users have furiously slammed Prada over a T-shirt featuring the face of activist Angela Davis, 74, calling out the Italian fashion house for trying to make money from her image when it doesn’t even know ‘who she is or what she stood for’.

As part of the brand’s spring 2018 comic books-inspired collection, the shirt, which is selling for $500, features an image of Angela – complete with her signature afro hairdo – with the writing ‘Right On’ beside it.

‘Miuccia Prada continues her feminist sentiment for SS18, with this white cotton T-shirt that features a logo appliqué of Trina Robbins’ Angela Davis portrait,’ the online description of the design explains. 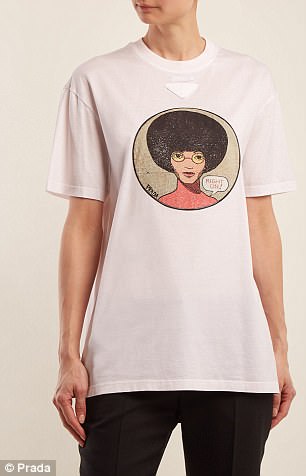 Expensive: Prada has released a $500 Angela Davis T-shirt with a graphic design of the activist’s face 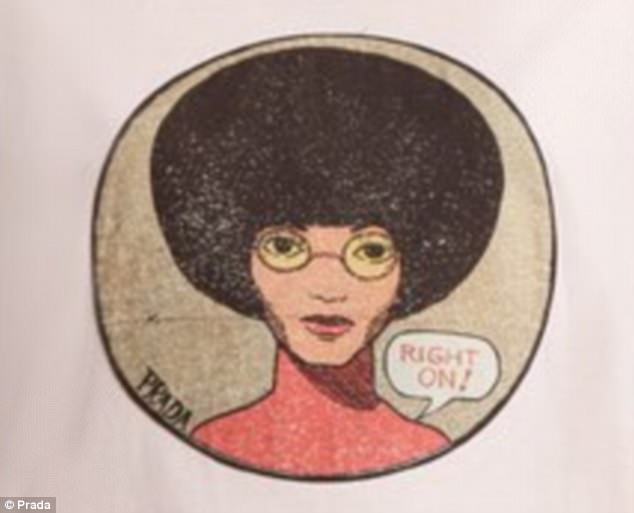 ‘It’s made in Italy from lightweight cotton-jersey, with a round neck and to a relaxed silhouette. Style it with the house’s comic-illustration trench and wide-leg trousers for a stylish look that packs a powerful message.’

The Angela Davis graphic was designed by cartoonist Trina Robbins, the first woman to draw Wonder Woman for DC Comics.

‘It was lovely for Mrs Prada to use the Angela Davis one,’ Trina told Dazed when asked about why the inspiration behind the Angela design.

‘In the original context, I had that made for the back cover of the very first all-female comic book, called It Ain’t Me Babe, which came out of Berkeley in 1970.’

‘The idea was you’d put this in your window to announce that if Angela Davis just happened to be passing by on the lam from the FBI she could knock on your door and you could give her refuge. 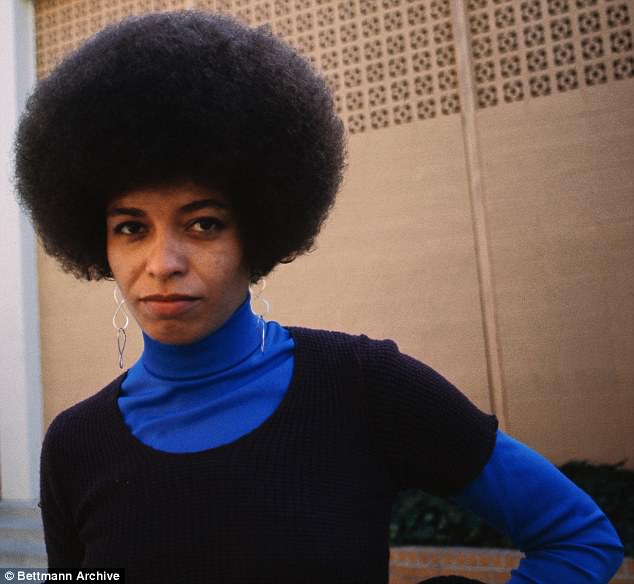 Icon: Angela Davis outside outside a courthouse in San Jose during her trial for kidnapping and murder in 1972 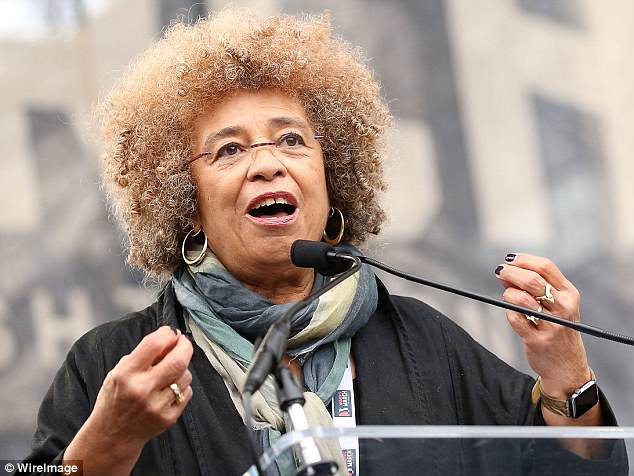 Still active: Angela, now 74, spoke at the rally at the Women’s March on Washington on January 21, 2017 in Washington, DC

‘Terribly romantic notion! I mean, I absolutely idolized Angela Davis. Running from the FBI, my God! She was such a comic-book character.’

But a lot of people aren’t convinced, taking to Twitter to share their thoughts on the use of her image for a $500 shirt with some saying that people who know who she is and look up to her wouldn’t be able to afford the shirt.

While others believe that Prada profiting off the image of a civil rights activist is unfair considering the fashion house doesn’t care about black people.

And others think the design is ironic because some Twitter users believe that no one working for Prada knows who she is or what she stood for, which is gender equality, prison reform and the betterment of African Americans.

One person tweeted: ‘Prada really out here selling an Angela Davis shirt for $500, capitalism is a disease,’ while another person noted: ‘Prada making a shirt of Angela Davis for $500 p**s me off so much g*****n.’

One user then shared: ‘Imagine thinking you’re a woke af [sic] bae and buying a Prada shirt with Angela Davis’s likeness on it.’

Disappointed: People have taken to Twitter to share their distress over the shirt with one person who tweeted ‘capitalism is a disease’

Not happy: Another person said that Prada making a shirt of Angela Davis p**s them off ‘so bad’

Outraged: Another person called out Prada for not knowing what she stood for

And one tweet said: ‘Lmao. And y’all wonder why we are still at the bottom. Lmaoooo. Angela Davis G!?! Does anyone at Prada even know what she stood for?? That’s like Hitler wearing an Anne Frank T-shirt.’

More people took to the social media platform to share their disappointment in Prada making an Angela Davis T-shirt.

One person said: ‘Prada using Angela Davis to make money off them shirts,’ while another said: ‘That Angela Davis Prada shirt has to be a prank. Gotta [sic] be.’

Another tweet said: ‘Definitely not. I’m not paying Prada $500 to wear an Angela Davis shirt. Why would I support them using a political icon’s image on their product for aesthetic purposes, when they don’t care about the movement or black people in general. Stop being problematic lol.’

Not real: One person couldn’t fathom the idea of an Angela Davis shirt and said that it had to be a prank

Problematic: One person wrote that the shirt was ‘problematic’ and that she would never pay Prada to wear a $500 Angela Davis shirt

And one person wrote: ‘The person who forks over five bills for a T-shirt should most certainly NOT be wearing the likeness of Angela Davis.’

Another said: ‘Prada having an Angela Davis shirt really got me hot frfr [sic]. Like what gave them the audacity?’

But someone also noted in one of their tweets that not only is Prada selling an Angela Davis T-shirt but it’s also selling a $1,700 jacket with the same design.

The tweet said: ‘That Angela Davis shirt for $500??? Jacket for 2k, majority of the people who know who she is and look up to her can [sic] even afford a fraction of that, but go off @Prada.’

Unacceptable: One person said that the person who would pay $500 to wear an Angela Davis should ‘not be wearing the likeness of Angela Davis’

Audacity: Another person could not believe that Prada would sell an Angela Davis shirt and rhetorically asked ‘what gave them the audacity’

Go off: One tweet mentioned that the fashion house was also selling an Angela Davis jacket

The Angela Davis Prada coat is selling for $1,700 and has the same graphic design as the T-shirt.

The description said: ‘Wonder Woman, no; Angela Davis, yes. Miuccia (Prada’s) superhero wasn’t the archetypal character you might see on the screen of a Marvel feature, but the American political activist, Angela Davis.’

‘She fit the designer’s concept of what a young, combative woman should be. Filtered through the SS18 collection’s comic book medium, she’s immortalized on the back of this coat as a cartoon figure. ‘Right On’ seems an appropriate victory cry.’

Miuccia Prada, the head designer of the brand, told Vogue last September when the collection debuted on the runway, that the designs were ‘interested in someone who can be active and present today’.

Same design: The Angela Davis Prada coat is selling for $1,700 and has the same graphic design as the T-shirt 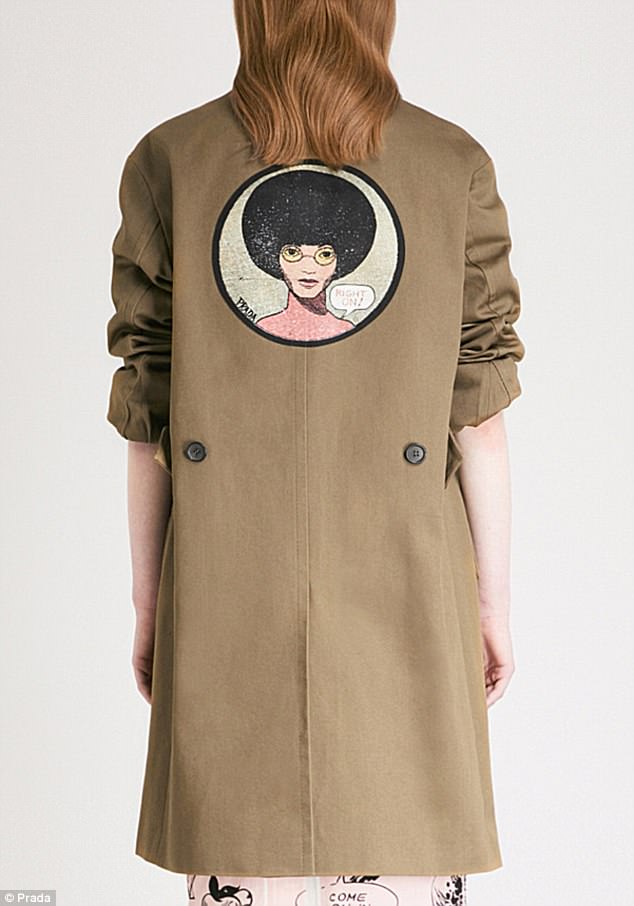 Militant women: Miuccia Prada said that she was ‘suggesting militant women in a very practical way – through clothes’

She said: ‘I am suggesting militant women in a very practical way. Through clothes, which is what I do because there’s so much against us, still.’

Angela hasn’t said if she approves of the shirt or not but in the meantime, fans of the activist, seem to be leaning toward the latter.

But this isn’t the first time the fashion house has left shopper astonished over its clothing options or accessory options as last June, Prada was mercilessly mocked by Twitter users for selling a ‘paper clip’ for $180.

The polished sterling silver money clip is currently on sale in Barney’s New York marketed as a Paperclip-Shaped Money Clip.