Hollywood stars and average Americans tweeted out their thanks on Tuesday to ABC Entertainment President Channing Dungey, the executive who announced the cancellation of Roseanne.

The show’s creator and star, Roseanne Barr, came under fire on Tuesday for a tweet, in which she said former President Obama advisor Valerie Jarrett, who is African American, looked like the ‘muslim brotherhood & planet of the apes had a baby’.

Just hours after the tweet, ABC announced they were cancelling Barr’s show with a blistering statement from Dungey – the first African-American to lead a major network – who said the star’s tweet was ‘abhorrent, repugnant and inconsistent with our values’. 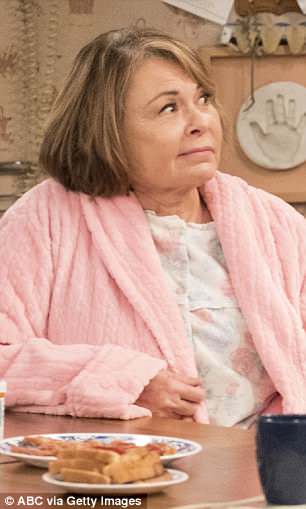 Viola Davis, who stars on the network’s series How To Get Away With Murder, was among the many who tweeted her thanks to Dungey on Tuesday.

Ava DuVernay, who most recently directed A Wrinkle in Time, tweeted out a picture of Dungey with this message: ‘For the record, this is Channing Dungey. Sitting on top of your world like a Queen in full judgement of your garbage and taking it out.’

Dungey’s name quickly went viral on Twitter with many singing her praises, including How To Get Away With Murder star Viola Davis 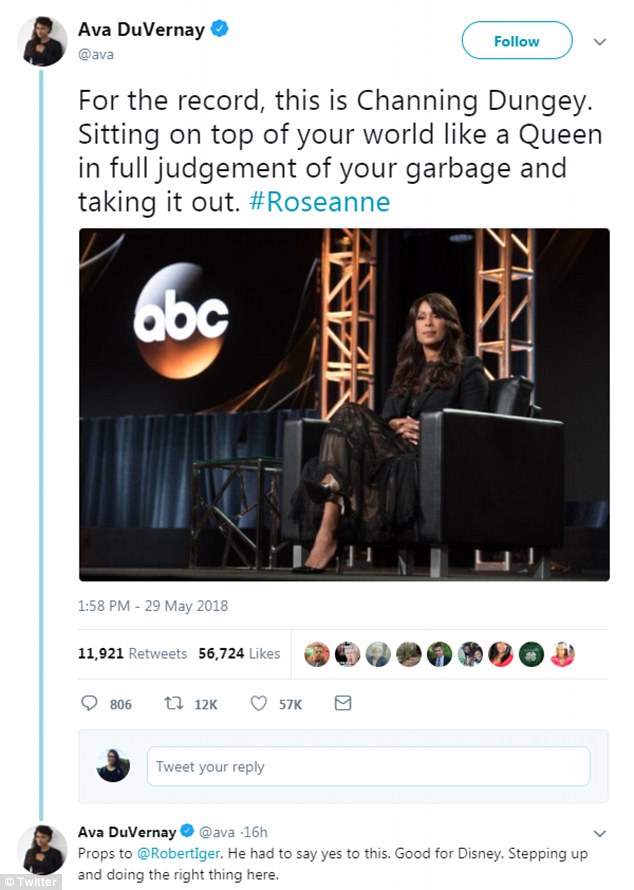 Ava DuVernay, the director of A Wrinkle in Time, wrote this message about Dungey

Tony Goldwyn, who played the president on ABC’s Scandal, congratulated Dungey and the network for calling out bigotry

‘I have never been more proud to work for ABC,’ screenwriter and television producer Krista Vernoff wrote 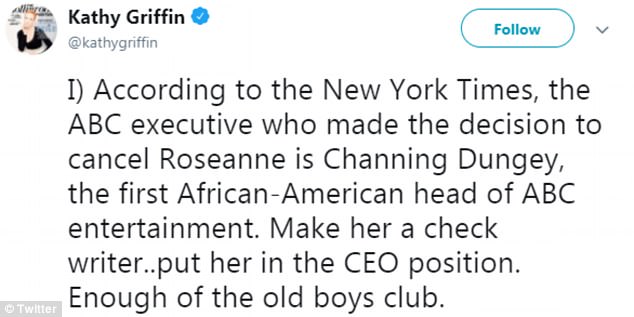 Kathy Griffin suggested that Dungey be promoted to CEO. ‘Make her a check writer…enough of the old boys club,’ she wrote 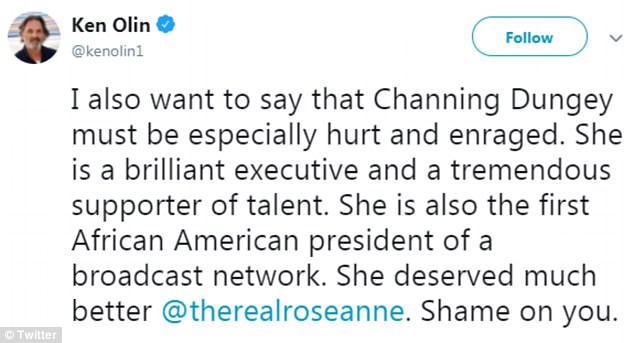 Ken Olin, who is currently directing and producing the hit show This Is Us for NBC, said that Dungey must have felt ‘especially hurt and enraged’ by Barr’s tweet

Even one of the stars of Roseanne, Emma Kenney, said she was grateful to Dungey.

‘As I called my manager to quit working on Roseanne, I was told it was cancelled. I feel so empowered by @iamwandasykes, Channing Duney and anyone at ABC standing up for morals and abuse of power. Bullies will NEVER win,’ Kenney wrote.

The praise came from outside Hollywood as well.

‘What makes Roseanne getting fired even more sweet? This is the woman who got to do it. The first female African American president of ABC entertainment, Channing Dungey,’ a Twitter user named Michael wrote.

Another Twitter user by the name of Ricky had a similar sentiment. 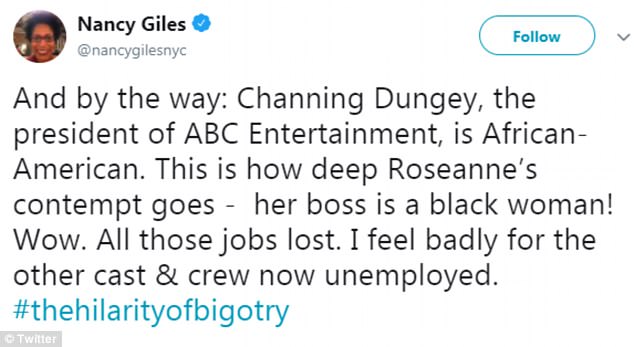 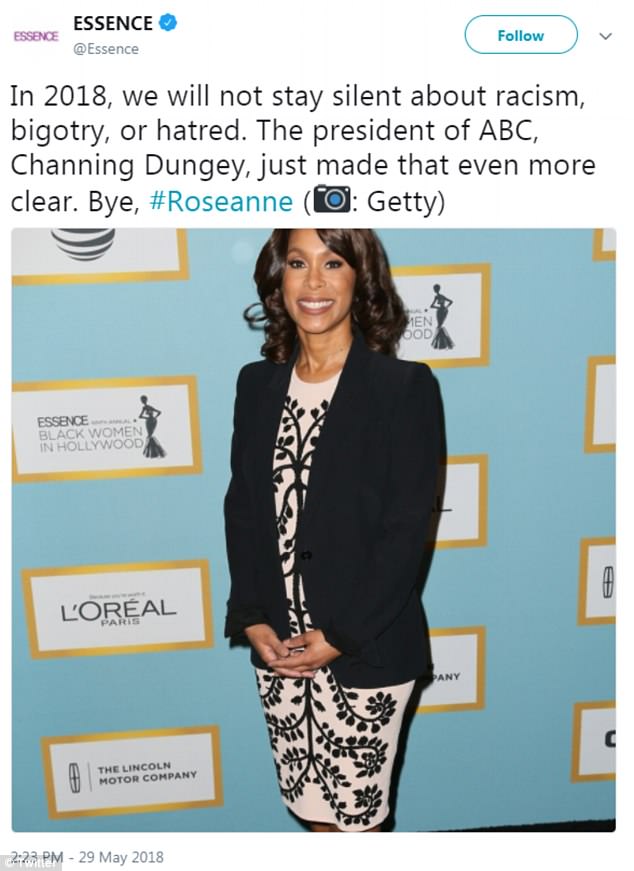 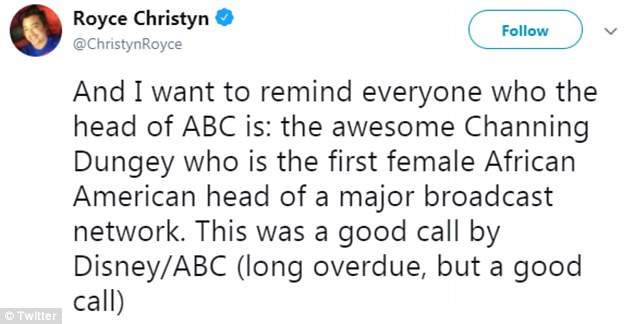 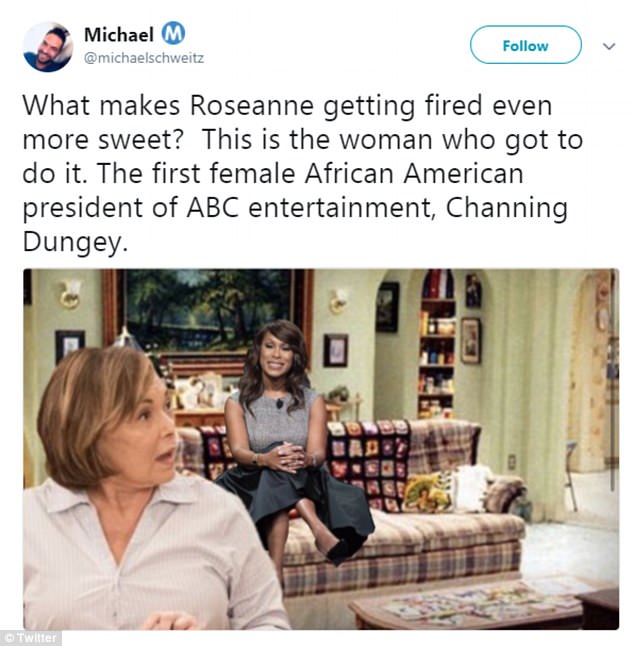 The fact that Dungey wrote the statement announcing the cancellation is unusual, the New York Times pointed out, since that job would usually go to one of her superiors – such as Ben Sherwood, the president of Disney-ABC Television Group, or Robert A. Iger, Disney’s chief executive.

It’s also a surprise since Dungey has been known to stay out of the limelight and let her work speak for itself.

The Sacramento native studied film and television at UCLA and then got into the business in the early 1990s, largely working in the film industry.

She joined ABC in 2004 as an executive at Touchstone Television, helping develop Criminal Minds for CBS and playing a role in the early seasons of Grey’s Anatomy.

She was promoted to president of Disney Entertainment in February 2016,  and in her first interview after getting the job, she told the LA Times that she wanted to focus on diversifying the network.

‘It has been part of my mission in my old role and it will continue to be as diverse as we possibly can — both in front of and behind the camera,’ she said. ‘It makes sense from a storytelling perspective, it makes sense in terms of reflecting the world that we live in. And it also makes really good business sense.’

But the network went another way when Trump won the presidential election eight months later. After the surprise outcome, Dungey told the New York Times that the network’s new goal was to address ‘economic diversity and some of the other cultural divisions without our own country. That’s been something we’ve been really looking at with eyes open since that time.’

It was Dungey who brought Roseanne back as part of this new initiative, and she faced criticism for that – especially when the show made a joke about minority programs on the network in an early episode.

Dungey and the network have also been critiqued for pulling an episode of the show Black-ish which dealt with the NFL kneeling protests, though Dungey has said that the decision to pull the episode as mutual between the network and the show’s creator, Kenya Barris. Barris meanwhile is allegedly in talks to leave the network for Netflix.

She has made diversity strides elsewhere though.

Less than a year before The Bachelorette cast its first African-American star, Dungey was quoted as saying the reality show franchise needs to ‘increase the pool of diverse candidates’.

‘That is something we really want to put some effort and energy towards,’ she said.