Rep. Pramila Jayapal tweeted and then pulled back a Sep. 11th remembrance post Sunday that honored those who died in the attacks after using a figure that online critics quickly pointed out appeared to include the 19 hijackers in the total.

It was the second consecutive year Jayapal had made the posting.

‘Today we remember the 2,996 people who were killed on 9/11 and all those who lost their lives while serving our country in the forever wars that followed,’ she said, using a term critical of the U.S. invasions of Iraq and Afghanistan that followed the 2001 attacks.

Her post came on a day when most other political figures were honoring the 2,977 victims – including those at the World Trade Center towers, at the Pentagon, and near Shanksville, Pennsylvania. The figure also includes passengers and crew who were aboard the four aircraft used by the 19 hijackers who carried out the attack. It includes first responders who died in the attack.

‘Today we remember the 2,996 people who were killed on 9/11 and all those who lost their lives while serving our country in the forever wars that followed,’ wrote Rep. Pramila Jayapal (D-WA), using a figure that appears to include the 19 hijackers in addition to the total of people killed that day. She deleted the tweet after posting and and being criticized online

Her tweet was accompanied by an image of the twin towers.

The usually media savvy lawmaker from Washington is a prominent progressive.

Her office provided no immediate explanation when asked why she took down the tweet.

Her 2021 tweet on Sept. 11th was identical and also was taken down.

She subsequently tweeted on Sunday about those who suffered in the aftermath of the attacks.

‘Today we must remember the communities right here at home that suffered so much — not only through the terrorist attacks that affected every American’s psyche, but also the hate, discrimination, and erosion of civil liberties they had to endure,’ she wrote. 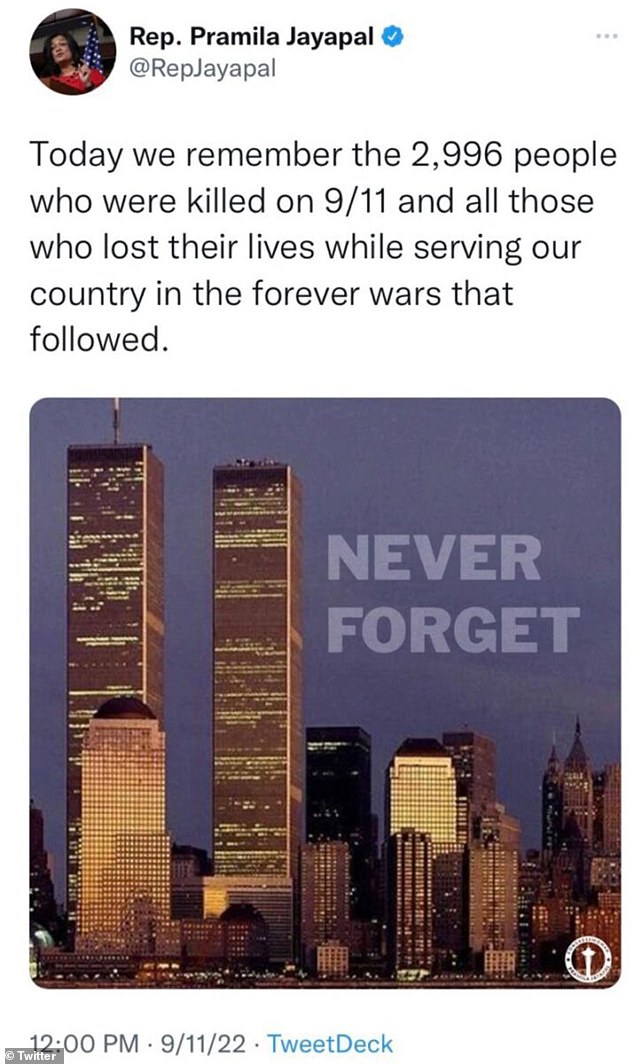 Jayapal posted an identical tweet last year. It included an image of the twin towers 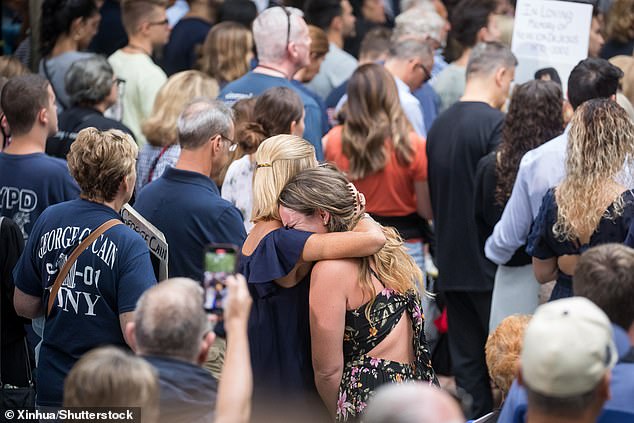 She posted the tweet as the nation mourned those lost in the Sept. 11, 2001 attacks 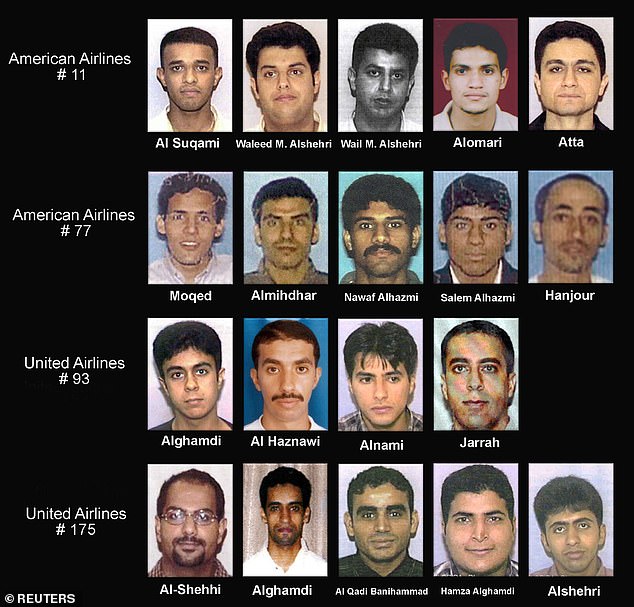 A Google search of the number of people killed produces the 2,996 result, which includes the 19 hijackers 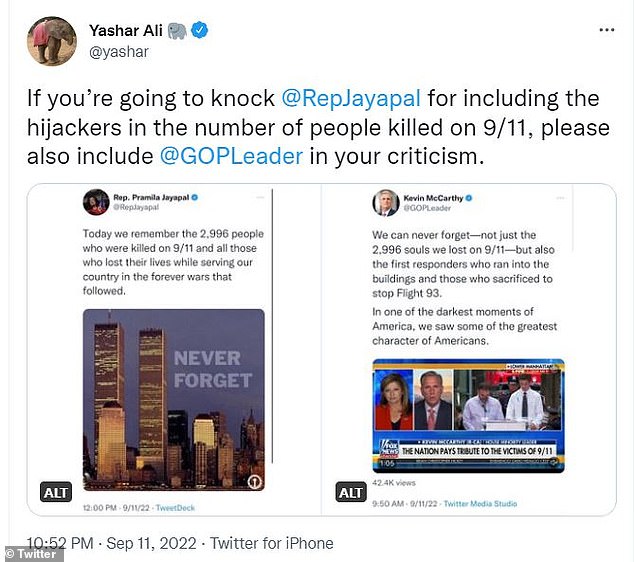 Media accounts have noted that a Google search of the question ‘how many people died on 9/11?’ results in an answer of 2,996.

‘If you’re going to knock @RepJayapal for including the hijackers in the number of people killed on 9/11, please also include @GOPLeader in your criticism,’ wrote journalist Yashar Ali.

McCarthy tweeted at 9:50 AM Sunday morning: ‘We can never forget — not just the 2,996 souls we lost on 9/11 — but also the first responders who ran into the buildings and those who sacrificed to stop Flight 93,’ in reference to the United Airlines flight that crashed in Somerset County, Pennsylvania.

The National Commission on Terrorist Attacks concluded the U.S. Capitol was the likely target of Flight 93.

‘I’ll remember the 2,977 victims, and not the 19 terrorists, but you do you,’ wrote Case Western Reserve law professor Jonathan Adler, with other commentators noting she had done the same tweet last year.

Jayapal’s office did not immediately respond to questions about why she used the figure or took down the tweet.

President Joe Biden used the 2,977 in his own remarks at the Pentagon Sunday.

‘Twenty-one years ago — twenty-one years, and still we kept our promise: Never Forget. We’ll keep the memory of all those precious lives stolen from us: 2,977 – at Ground Zero in New York; in Shanksville, where my wife is speaking now; in Pennsylvania; 184 of them here at the Pentagon,’ he said.