A prankster who loves to wind up his ‘angry Victor Meldrew-like’ neighbour used a crow caller to entice 300 of the birds to mob his house – pecking up his newly seeded lawn.

Stuart Panter claims he loves nothing more than winding up his ‘very angry’ neighbour Dez Mansell and planted the device on his shed projecting a crow’s distress call.

The 37-year-old was left in hysterics as more than 300 birds started to gather on poor Dez’s rooftop in Oxford and before attacking his lawn for seeds earlier this month.

The dad-of-four videoed the prank and caught Dez’s furious reaction when he discovered the speaker hidden on his shed nearly two hours later.

Footage shows Stuart sneaking round to the back of Dez’s house and hiding the crow caller in a ladder on top of the shed, before activating it and sneaking away.

He then watches as crows begin to gather on the rooftop and television aerials of the neighbouring houses and swarm in large numbers across the sky in search of the sound.

Dez can be seen leaving his house to investigate the source of the sound, at first thinking it is coming from inside the shed before discovering Stuart’s crow caller hidden on the roof.

Peering over his garden fence, Dez shouts: ‘Stuart you’re a pr***.’ Looking down at him from a top floor window in his house, Stuart then says: ‘What’s up, Dez?’

Dez later revealed his daughter-in-law rushed to bring in her washing off the line after the crows pooed on it.

The 51-year-old also bemoaned that the murder of crows had left his newly reseeded lawn covered in patches as the hungry birds devoured the seeds.

While Stuart loves winding Dez up, he claims the pair are friends too – although his neighbour has now sworn revenge.

‘He has a little soft spot for me so he lets me wind him up and his reaction is always genuine. We are friends as well.

‘I was in the garden and I was bored and wanted something to do. I thought about it and I literally thought about and implemented it in about five minutes. Nothing had been pre-planned.

‘Anything that happens is as it happens and genuinely the reaction.

‘Realistically it’s just a speaker that makes a crow sound. I think it bought in about 200 or 300 crows.

‘It was hard to capture them all because they’re all flying around in different loops, some are in the air and some are sat on the roof.

‘They do act very confused when it is on because they can’t work out where the sound is coming from because they are looking for a crow in distress.

‘It was echoing around the back of the houses it was probably reverberating and they couldn’t tell where it was from. It was amazing.

‘I was just expecting him to tell me I’d p****d him off [later on]. It definitely worked out better than I expected. It kept me entertained anyway.

‘The crows were just flying around so Dez has only just seeded his garden.

‘Of course, I’d forgotten that he’s seeded his lawn so when I did the crow thing it was more impactful than I thought because he was worried they were going to come down and peck all the grass seeds out.

‘I still love the video. I swear I watch my videos more than anyone else. One thing I’ve found in life is if I can make myself laugh and smile, that’s half the battle.’

Stuart shared the video online where it received more than 77,000 views and more than 950 likes, comments and shares.

Stuart has previously pranked Dez, a huge Aston Villa fan, by pinning a sign for rival team Birmingham City round the back of his house with flashing lights, as well as hiding City stickers on his wheelie bins.

Dez admits he can never fully get Stuart back, but has a prank involving putting his house up for sale in the pipeline for the future.

Dez, who is originally from Birmingham, said: ‘I came back from being out with some of my mates, came into the house and my step-daughter told me there’s a trapped bird in the shed.

‘She had had to take all her washing in because all of the crows had been cr***ing on it and they keep swarming round.

‘She stayed indoors because of all the crows.

‘We went to where the shed is around the back and I was just about to open it when we found the crow caller on the roof of the shed.

‘I lay my lawn a few months back because I had loads of weeds in it so I had to strip it and reseed it, which Stuart knew.

‘I had only just done it and I think it was another reason he did the birds, I think. He’s quick off the gun.

‘I’ve got patches in my lawn now. I think the birds pecked it out.

‘Instantly I knew who it was because he does it all the time. He always gets me on stuff.

‘He’s a good lad but he is going to get it back. He’s cleverer than me so he dreams up some good ones.

‘He’s always getting me. I’m a big Aston Villa fan and he put a sign up of Birmingham City football club round the back of my house with flashing lights.’ 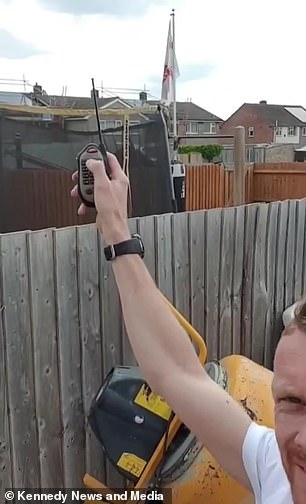 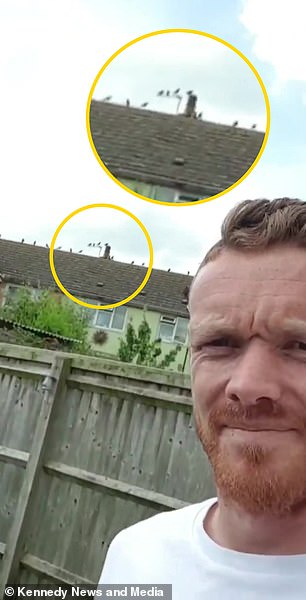 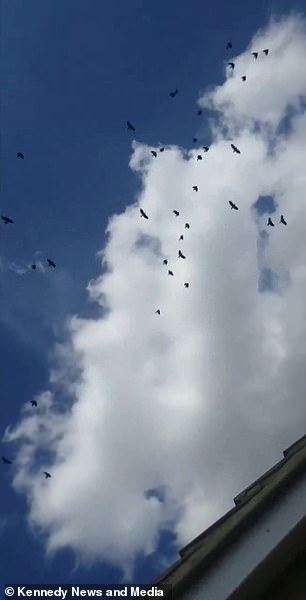 Within a few minutes hundreds of crows had begun to circle the property, swooping down to peck at Dez’s lawn as they searched for the distress call 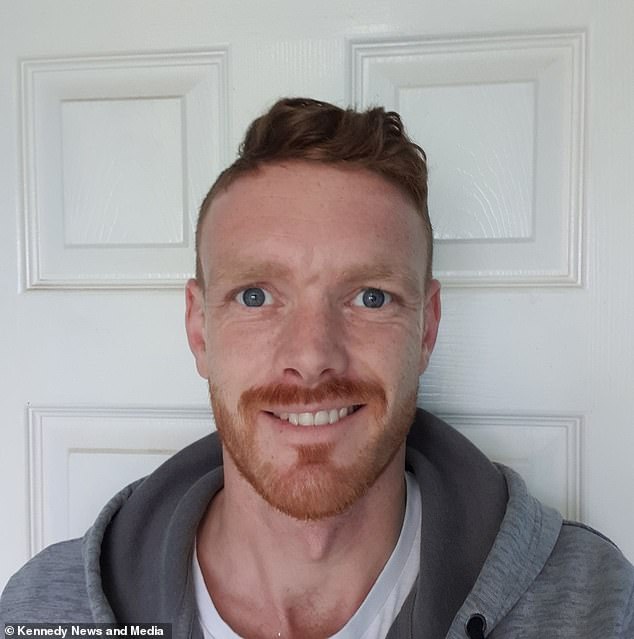 Stuart, from Oxford has described his neighbour as a bit of Victor Meldrew. ‘I just love winding him up. He’s a very angry man and I just like winding him up,’ he added 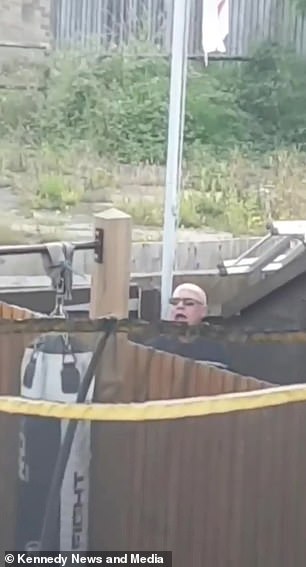 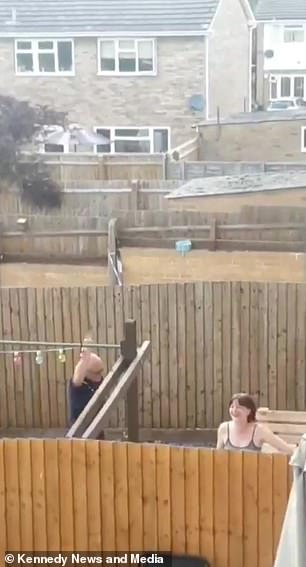 Neighbour Dez finally finds the device making the distress call after hours of crows flying overhead. His wife had to take in washing that was drying after the birds started to poo 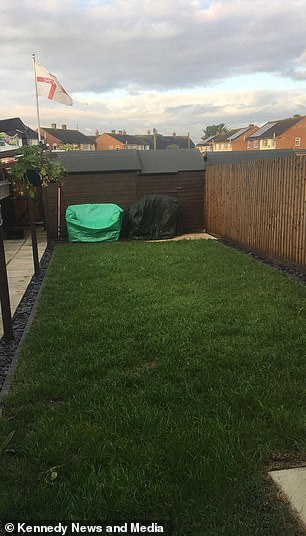 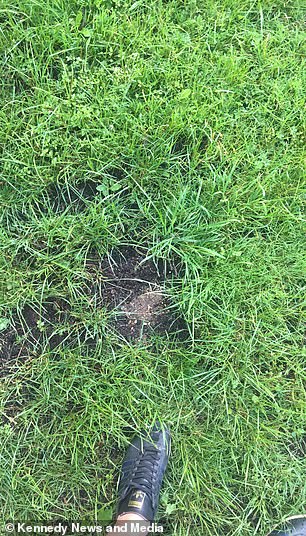 The 300 birds also pecked at Dez’s newly seeded lawn, and after growing the lawn revealed a number of bald patches where the crows had eaten all of the seeds 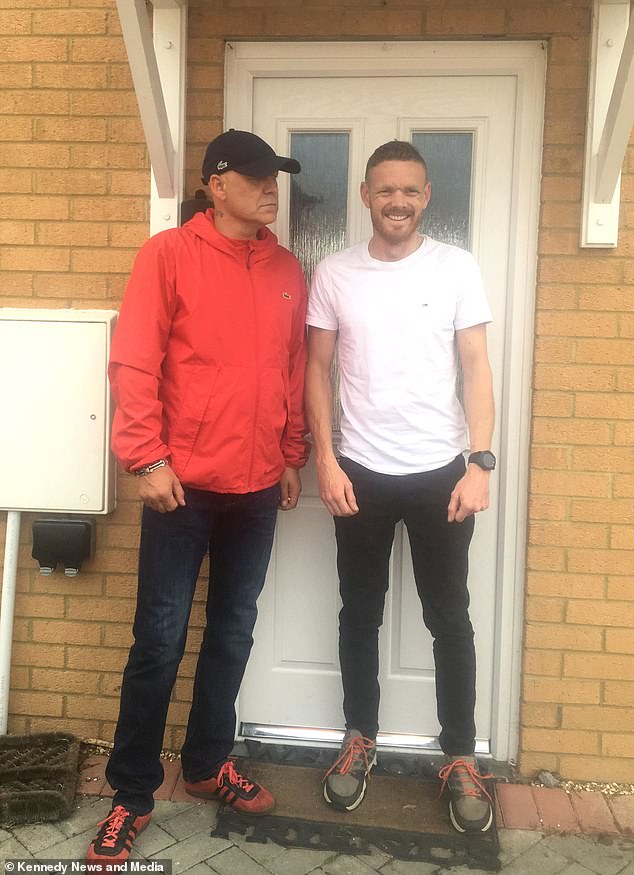 Stuart (right) has previously pranked Dez (left), a huge Aston Villa fan, by pinning a sign for rival team Birmingham City round the back of his house with flashing lights, as well as hiding City stickers on his wheelie bins