It is the TV series that made its name with profane themes and attacks on religion – but now it seems Preacher is straying into the world of politics as well.

During the third season finale, which aired on Sunday, a neo-Nazi was shown wearing a Make America Great Again hat while trying to free Hiter from a prison bus.

The political jibe divided fans of the show, with some applauding it while others vowed never to watch again. 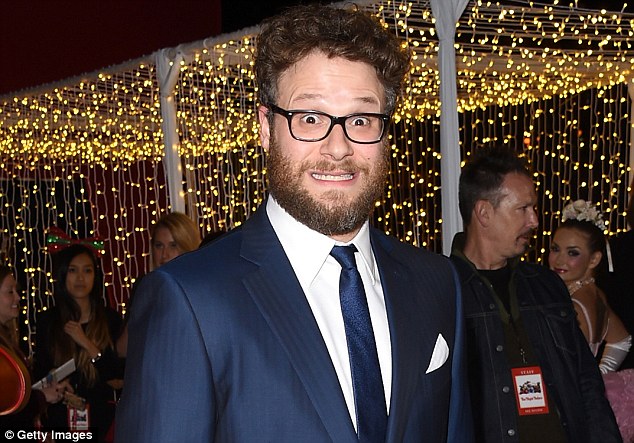 The series is produced by Seth Rogen who has been an outspoken critic of Trump, and revealed he privately messages Trump Jr on Twitter with criticisms of his father

Preacher is produced by Seth Rogen, Sam Catlin, and Evan Goldberg and is based on a DC comic book series of the same name.

It follows the story of Jesse Custer, a hard-drinking, chain-smoking preacher from West Texas who is having a crisis of faith when he is embodied by Genesis – the spirit spawn of an angel and a demon.

Imbued with new powers he enlists the help of his ex-girlfriend Tulip and a hard drinking Irish vampire named Cassidy to go on a literal search for God.

The ensuing seasons have been filled with gory violence, blasphemous themes and jokes at the expense of Christianity – with God called a d*** in one episode.

Some fans reacted with anger to the political jibe, vowing never to watch the show again

At the end of the first season Hitler was freed from Hell and came to America, where he promptly set about trying to reestablish the Third Reich.

While in the process of gathering followers, the Angel of Death snatches the dictator up and throws him on a bus back to the underworld – which is where the final episode of the third season finds him.

But on its way back to Hell, the bus is waylaid by a group of neo-Nazis and their tank, who attempt to free him.

In one shot, a group of uniformed Nazis run up and threateningly cock their weapons, before one is seen wearing the hat.

Others appreciated the joke, while a few also pointed out that Preacher has made far more offensive jokes about religion without causing a stir

The scene divided viewers on Twitter, with one writing: ‘Why does Hollywood have to ruin everything? You’re a d*** Set Rogen.’

Rogen is an outspoken critic of Trump, and has revealed he privately messages Trump Jr on Twitter with attacks on his father.

However, others were more supportive, saying the hat was a ‘nice touch’. Another pointed out the hat reference alongside laughing emojis.

A third pointed out: ‘I’d like to say that if you are more offended by a Nazi character wearing a MAGA hat than by all the God, Hitler and Jesus stuff, then you need to get your priorities right.’