A precious little girl has made history by becoming the first Gerber baby to have been adopted  — just in time for her first birthday.

Magnolia Earl, who turns one on Saturday, was named the winner of the 10th annual Gerber Baby Photo Search after beating out 327,000 contestants. The tot is following in the footsteps of the brand’s other groundbreaking babies, including 2019’s spokesmodel Kairi Yang, the first Gerber baby of Hmong descent.

The toddler from Ross, California, ‘captured the hearts of the judging panel with her joyful expression, playful smile and warm, engaging gaze,’ according to the announcement.

Scroll down from video

Adorable: Magnolia Earl, who turns one on Saturday, was named the winner of the 10th annual Gerber Baby Photo Search on Friday after beating out 327,000 contestants 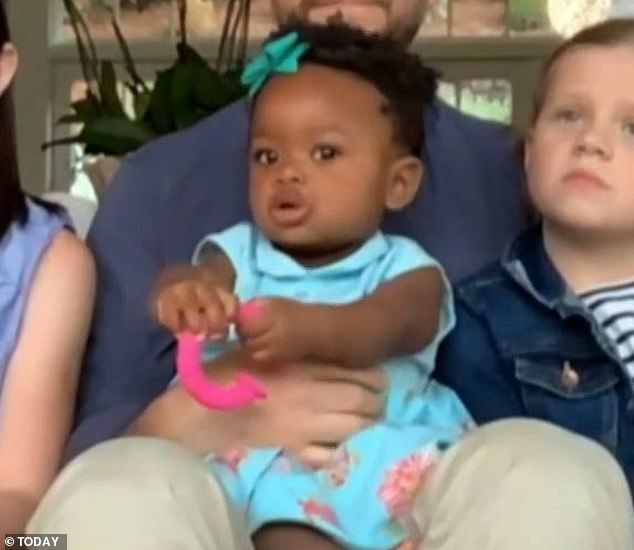 Breaking boundaries: The toddler from Ross, California, has made history by becoming the first Gerber baby to have been adopted

Magnolia’s mother, Courtney Earl, opened up to Gerber about her daughter’s adoption and how happy she is to be able to share their story.

‘On May 9th, 2019 we received a call from the Adoption Agency that there was an expectant mom that was in labor and wanted to talk to us!’ she said in the press release. ‘We pulled off the highway, got a chance to connect with her amazing birth parents, and a few hours later, this sweet baby girl was born.

‘Adoption is incredibly special to our family’s story,’ she added. ‘Winning Photo Search is an opportunity to tell Magnolia’s story and shed light on all the beautiful and different ways families are made.’

Magnolia has two older sisters, 12-year-old Whitney and eight-year-old Charlotte, who is also adopted. Whether they’re splashing in the kiddie pool or dancing to the Baby Shark song, the girls love playing with their baby sister. 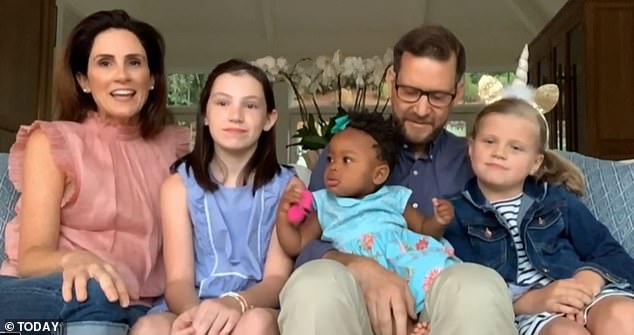 Family: Magnolia appeared on the Today show on Friday with her adoptive parents, Courtney and Russell Earl, and her sisters, Whitney and Charlotte, who is also adopted 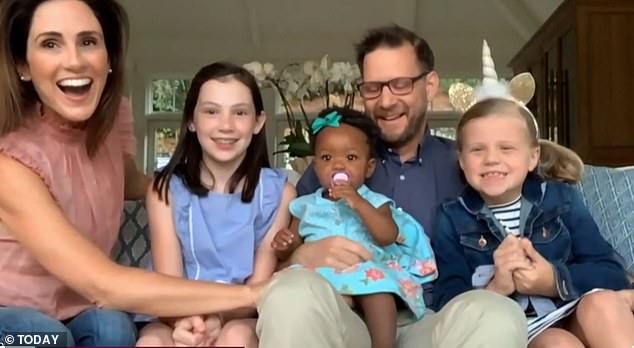 Exciting: Magnolia’s family learned that she had won the photo search while appearing on the show. ‘This is incredibly,’ said Courtney, who praised Magnolia’s birth parents

‘Magnolia has brought so much joy to everyone she meets,’ Courtney said. ‘Her personality is beyond happy and joyful.’

Gerber announced the news on its Instagram page on Friday, sharing a close-up photo of Magnolia donning pink corduroy overalls and a headwrap while flashing a gummy smile for the camera.

‘Hello and congratulations to Magnolia, our 2020 Gerber Spokesbaby!’ the brand captioned the portrait. ‘We’re thrilled to welcome you to our growing Gerber family!’

Gerber President and CEO Bill Partyka said Magnolia’s adoption story is an important reminder about the power of love amid the coronavirus pandemic. 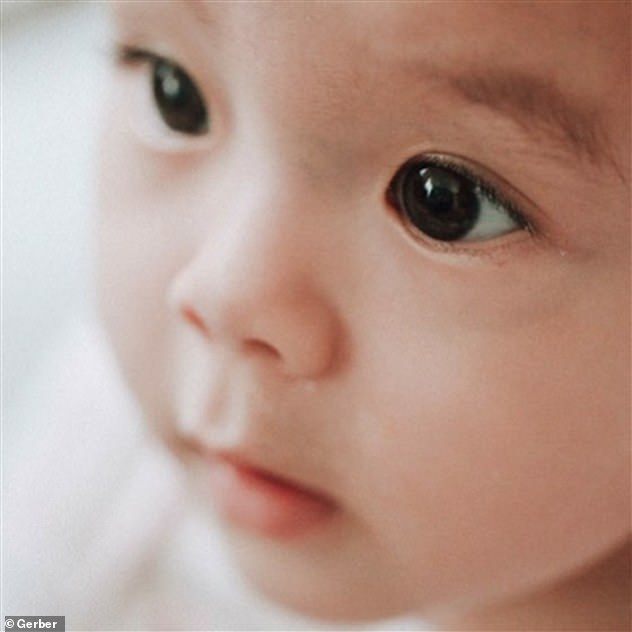 Too cute: Kairi Yang was named the winner of the 2019 Gerber Baby Photo Contest 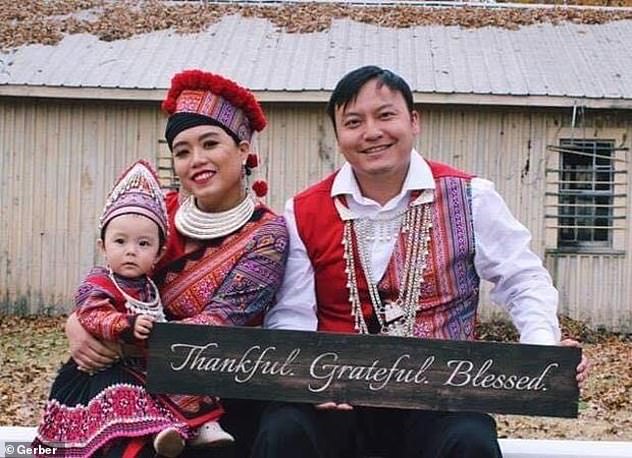 Amazing: Kairi, pictured with her parents Ying Vue and Peter Yang, made history as the first Gerber baby of Hmong descent

‘At a time when we are yearning for connection and unity, Magnolia and her family remind us of the many things that bring us together: our desire to love and be loved, our need to find belonging, and our recognition that family goes way beyond biology,’ he said in the press release.

Magnolia’s family learned that she had won the photo search while appearing on the third hour of the Today show on Friday.

‘This is incredible,’ said Courtney, who was close to tears. ‘It means that when people see our families, or if you see a family that doesn’t necessarily match, that you don’t have to question the belonging of anybody in that family.’

‘Mommy always says a family is built on love,’ her husband, Russell Earl, added: ‘We may all look different, but we’re one family.’ 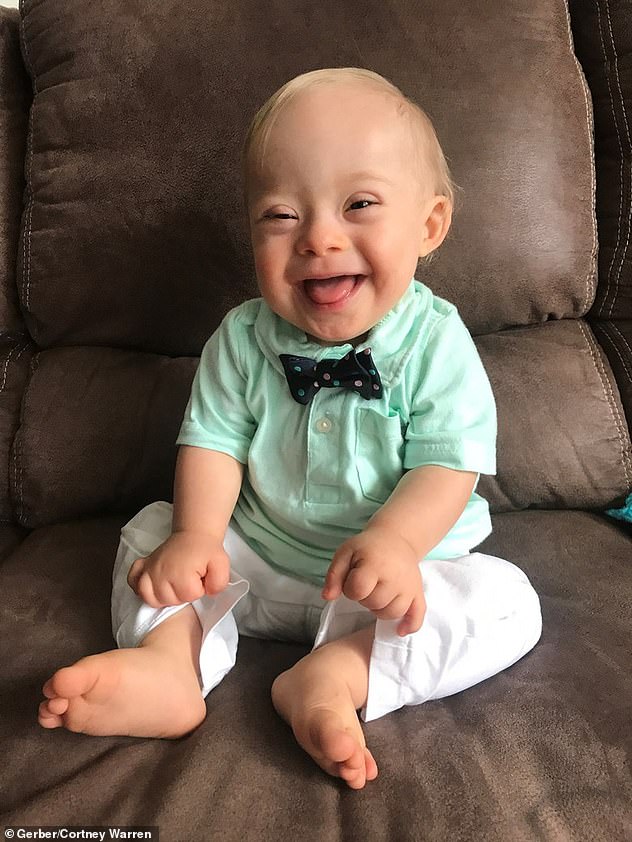 Winning smile: Lucas Warren became the first Gerber baby with Down syndrome in 2018 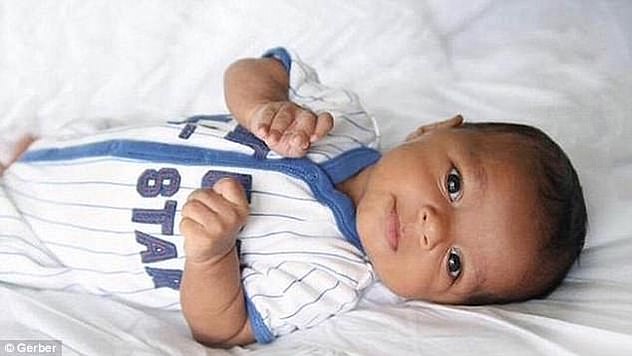 In good company: Riley Shines was chosen as the 2017 Gerber spokesbaby 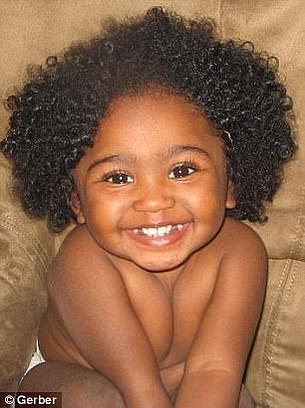 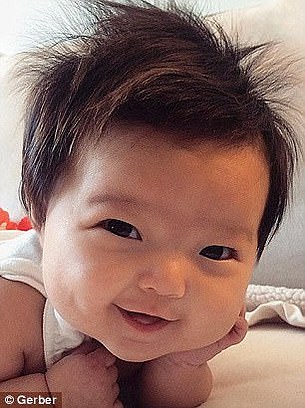 Striking a pose: Mercy Townsend, left, was named the winner in 2010, while Isla Welch, right, was the spokesbaby in 2016

The proud mom shared that they are in regular contact with Magnolia’s biological parents, who were watching them on the Today show at that very moment.

‘We celebrate adoption in our family every single day,’ Courtney said. ‘The real hero in this story are Magnolia’s birth parents. They chose her life, and they sent her on this incredible journey.’

Courtney revealed that she had spoken with Magnolia’s birth parents on Thursday about her being a finalist in the Gerber contest.

‘If you could hear the joy in their voice of how proud they are of this little girl,” Courtney said, struggling to hold back tears. ‘Together with them and our community and our family, we all this love this baby girl so much.’

‘She brings so much joy and happiness to everybody,’ she added. 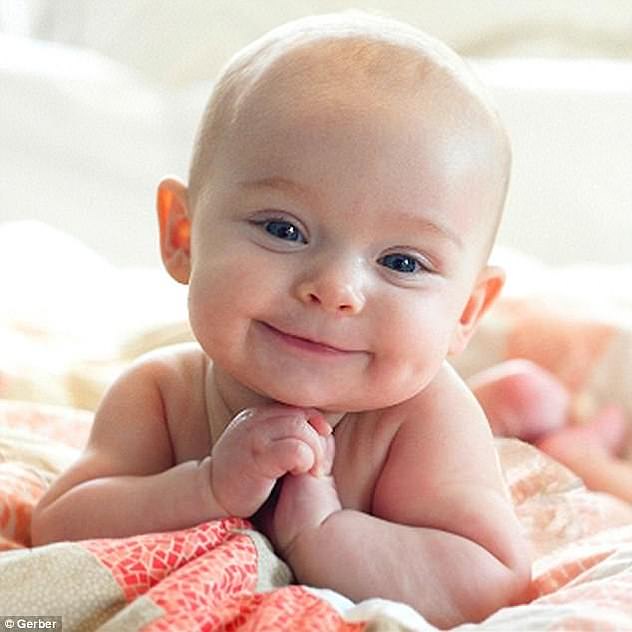 Cute: Grace Pfautz was named the winner of the competition in 2014 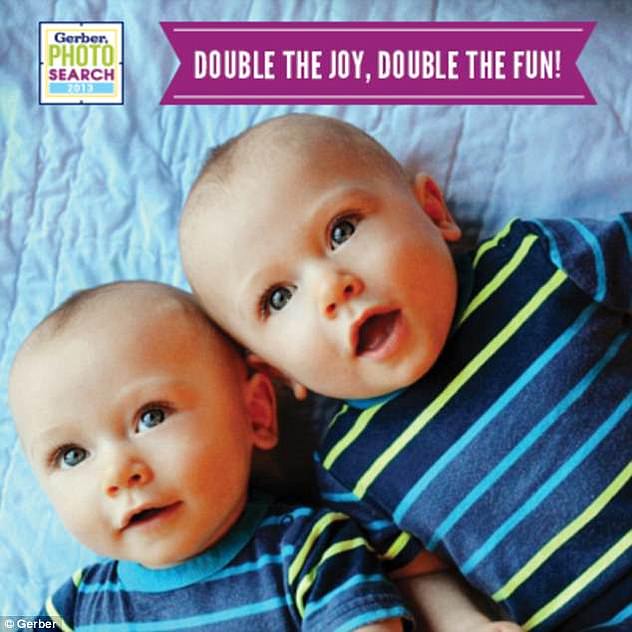 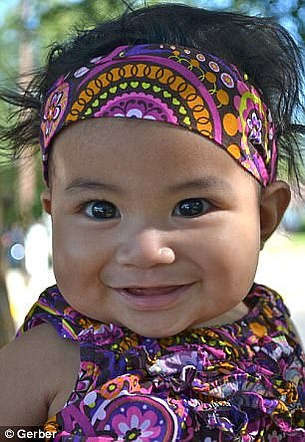 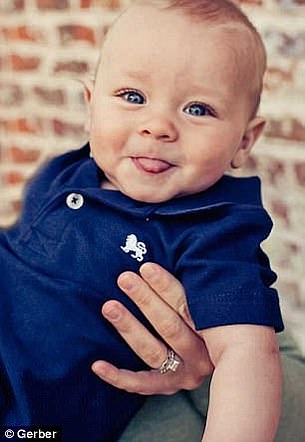 As the winner of the photo search, Magnolia will be featured on Gerber’s social media channels and marketing campaigns for the next year.

The family will also be taking home plenty of prizes, including a $25,000 award, $1,000 from Gerber Childrenswear, $1,000 from Walmart, and cellphones with a year of unlimited free service from Verizon.

Gerber’s first national photo contest took place in 1928, with Ann Turner Cook being named the winner after her family submitted a charcoal drawing of her.

Ann, who is now 93, was the face of the brand until 2010. Gerber then launched its annual Photo Baby Search to celebrate even more babies and toddlers.

Gerber has been a champion of diversity over the past decade. In 2019, Kairi Yang, made history as the first Gerber baby of Hmong descent, while Lucas Warren became brand’s first spokesbaby with Down syndrome in 2018.