Pregnancy joy for lupus sufferer, 29, who was told she could never carry children

At just 20 years old, then-law student Paula Birch Bilingsley was told she had less than 10 years to live and was infertile.

Having spent years battling anemia, depression, and a high liver protein count, in 2009 she was finally diagnosed with scleroderma and lupus, two life-threatening conditions that causes the immune system to attack itself.

Doctors said she had gone undiagnosed for so long that it would be impossible to undo the damage, and they were certain that the diseases had already made it impossible for her to reproduce.

Devastated, she accepted her new reality.

Paula graduated, got married, and when she and her husband, an Army officer, wanted to start a family in 2016, they adopted their daughter, Evy, thinking biological children were off the table.

But just over a year later, to their shock, Paula found out she was pregnant.

The nine months were difficult, often painful, with many life-threatening moments for Paula.

But against the odds, the now-29-year-old attorney and blogger gave birth to a little boy in October this year. 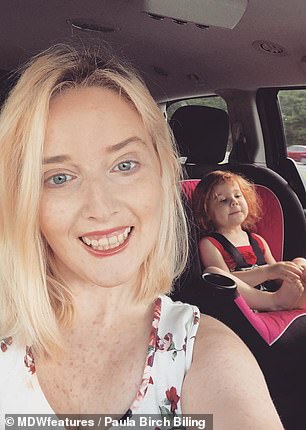 Fighting: Paula Birch Bilingsley, 29, is now a mother-of-two, just 10 years after she feared she would never have kids. She adopted her daughter Evy (right) in 2016, and a year later had a surprise pregnancy, giving birth to her son in October this year (pictured, left, while pregnant) 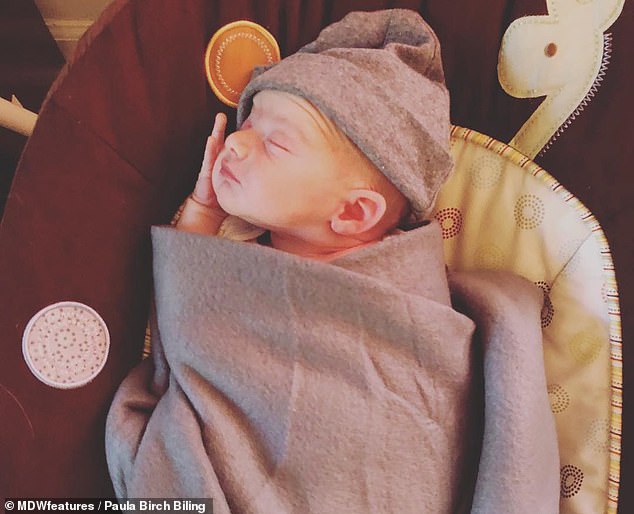 Paula was admitted for a planned C-section at 36 weeks, but ended up delivering without it a healthy 5lb 9oz boy who surprisingly didn’t need to go to the NICU. Paula had some issues with bleeding but she was stabilized and was able to go home with her bundle of joy 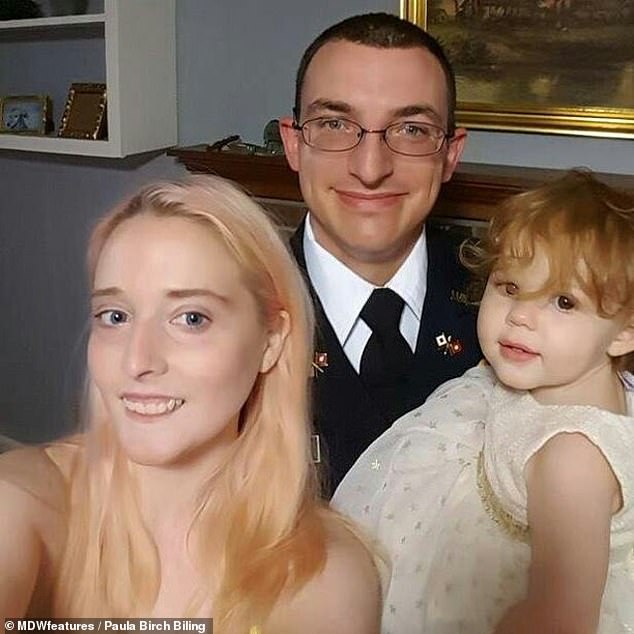 Happy family: Paula, her husband Jay, and their daughter Evy in August 2017

‘I had a deep feeling that everything would be fine,’ Paula said.

‘What helped me was finding a good doctor and staying active. I think the strides made in research just during the time I have had it, meaning new medicines, bring hope that we will find remission for many people. Maybe even a cure one day.’

She looked healthy and doctors couldn’t see anything that would be a likely culprit.

One doctor chalked it up to mental health issues, and at 18 she was prescribed antidepressants. It was the closest she had ever come to a diagnosis, and Paula was relieved at the idea she might have found an answer.

She stayed on the antidepressants for two years. It didn’t do much but she hoped it might.

However, things went south when she was at university.

It was so extreme that doctors decided to run some more specific tests and found some glaring concerns, including anemia and a high protein liver count.

That led them, finally, to an answer: Paula had both scleroderma and lupus.

Scleroderma causes excess calcium and scar tissue on organs, resulting in bruising all over Paula’s body, fatigue, red spots on her skin.

Lupus causes the immune system to attack itself, causing joint pain, rashes, fatigue and fevers. It can be exacerbated by exposure to sunlight, and it’s incurable.

To control her symptoms Paula was put immediately on a lifelong regimen of daily injections, and a strict diet.

‘At the time, I was a healthy and active young woman,’ Paula said.

‘The visible effect is what finally prompted a diagnosis because before that, any complaints were ignored, or I was given anti-depressants. 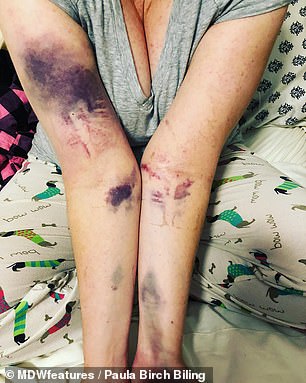 Paula bruises easily due to her diseases. Here she is pictured after having blood drawn during pregnancy

‘Once labs were run, it was clear that something was wrong.

‘It can seem invisible on the outside, but a look inside can tell a different story.’

Paula’s lungs are now half formed of scar tissue which makes her heartbeat faster than usual.

Doctors said Paula would be able to conceive but it would be very complicated, would likely involve IVF, and could be dangerous for her  health.

After going through so much trouble with her health already, Paula and her husband gave up their dream of having children of their own, instead choosing to adopt. In 2016 they adopted their daughter Evy, and their dream of being a family was realized.

But at the start of this year, just as Paula’s husband was about to be deployed with the military, they got the surprise that Paula was in fact pregnant with their son.

‘Adoption was the most amazing experience and we got to be there for every pre-natal appointment, the birth and bringing the baby home from hospital. Evy was an easy baby and we were so happy.’

Nonetheless, she was overjoyed – though slightly scared – that after years of trying, they were surprised by a pregnancy.

Being pregnant with lupus can be incredibly dangerous for the mother and the baby.

It meant that Paula had to take daily injections throughout her entire pregnancy to stop the placenta from clotting and killing her unborn baby.

Pregnancy suppresses the immune system, so Paula actually felt better while she was pregnant.

However, she reached a point when her skin couldn’t expand further, so there wasn’t room for the growing baby, and they had to deliver him early.

The baby was healthy, but lupus caused bleeding complications in the hours after delivery and I had to have emergency surgery and blood transfusions. 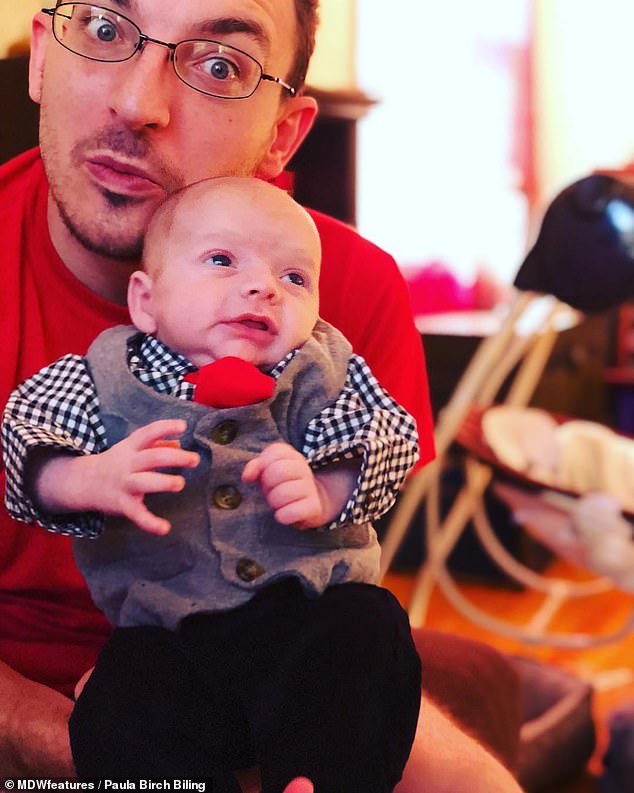 Happy families: Jay and their son pictured before church on a recent Sunday

For the newborn, everything was fine.

Their baby boy was born at 36 weeks, needing no special care at all. He was over 5lbs and he went home two days later.

For Paula, it was a different story.

‘The bleeding wouldn’t stop so they put me under and did an emergency procedure to see what was going on,’ she said.

‘They gave me drugs to help the blood clot and gave me two units of blood before it stopped.’ 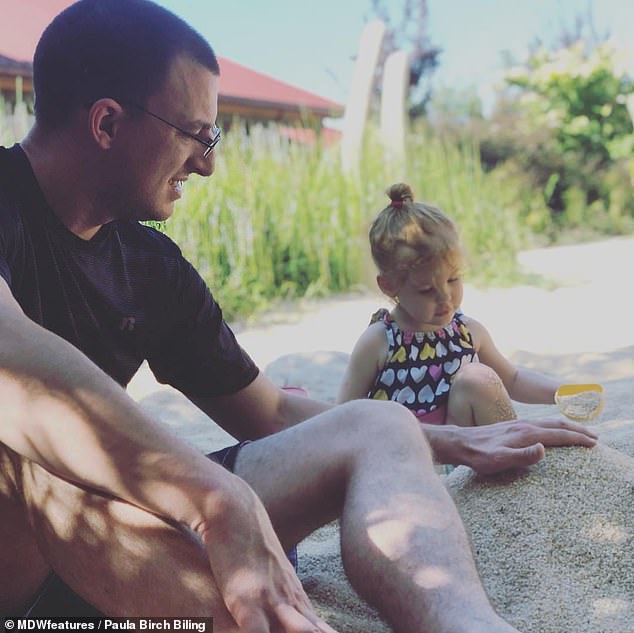 Jay and Evy on Paula’s birthday in September, a month before she gave birth to her son

She urges other sufferers to stay active with things like yoga.

‘If you don’t do things you will stop being able to do them forever,’ she warns.

‘Advocate for yourself by finding the best doctor you can who knows the disease – knowledge is power.’

For others, she says more people need to be aware of how debilitating chronic conditions can be, even if they aren’t immediately apparent.

‘Many of us have to use handicap services and yet we look young and healthy to a stranger,’ Paula said.

‘People should be aware that you can’t see all handicaps. Just because it’s not in your face, doesn’t mean it’s all in my head.

‘See me on a bad day – look at my labs and X-rays and it will become obvious.’