Pregnant Bianca Gascoigne exhibited her growing baby bump as she shared a radiant snap to Instagram on Tuesday during her Maldives getaway.

The model, 35, who is expecting a baby with her partner Arron Wright, looked incredible in just a black bra and a coordinating sheer shawl with gold star prints.

In her caption, she wrote: ‘Mother Nature. Baby B has finally popped out!

Looking good: Pregnant Bianca Gascoigne exhibited her growing baby bump as she shared a radiant snap to Instagram on Tuesday during her Maldives getaway 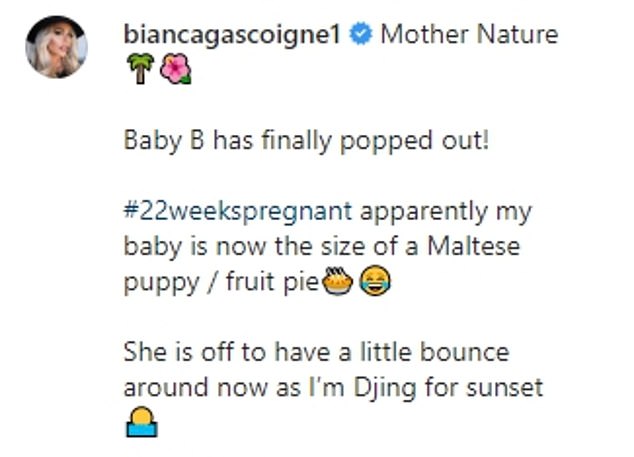 Showing: In her caption, she wrote: ‘Mother Nature. Baby B has finally popped out!’

‘#22weekspregnant apparently my baby is now the size of a Maltese puppy / fruit pie. She is off to have a little bounce around now as I’m Djing for sunset.’

The daughter of football legend Paul ‘Gazza’ Gascoigne and his ex wife Sheryl, who is 21 weeks pregnant, revealed the news at a huge ‘grazing’ party with her parents.

The couple, who confirmed their romance in December 2021, have been friends for 14 years and announced in August that they were expecting a baby in February 2023. 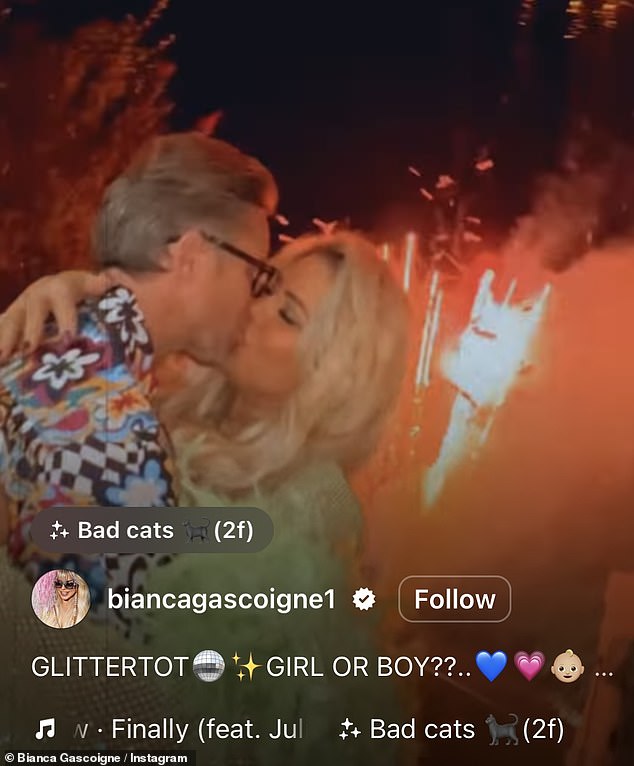 Exciting: The appearance comes after Bianca announced she is expecting a baby girl with her partner of one year, Arron Wright

The model put on a loved-up display with Arron at the event as they shared a smooch while celebrating with their nearest and dearest.

In a video shared to her Instagram Stories, Bianca teased fans with the caption: ‘GIRL OR BOY??’

Arron fired a pink confetti cannon to show they were expecting a girl and the happy couple then kissed one another.

Bianca also showed off a wardrobe containing designer pink baby clothes for their little girl when her is born.

The reality star announced the happy news she is expecting her first child by posing with her beau by recreating the movie posted for the 2007 comedy Knocked Up.

Alongside the fun photo, Bianca announced the bundle of joy is due in February, and wrote: ‘We’re having a baby.’

Bianca and Arron celebrated their one year anniversary on August 7 with a romantic trip to Paris.

In April, Bianca explained the pair’s path to romance, explaining they first met in Dubai in 2008 and stayed in touch over the years, before re-grouping in the ‘best relationship ever’.

Former glamour model Bianca told how the ‘universe had it planned all along’ and she and Arron had become the ‘best versions of ourselves for each other’ over the years. 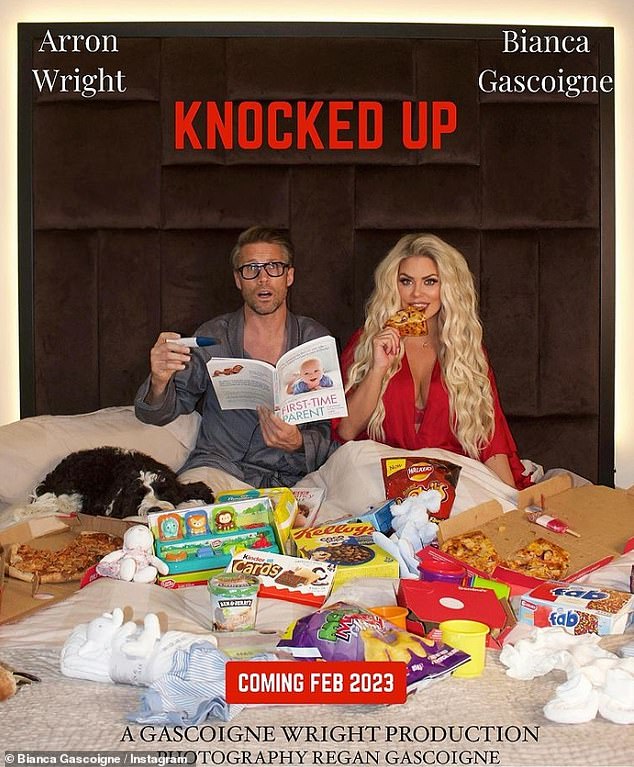 Happy news: Bianca first revealed she is expecting her first child by recreating the movie poster for 2007 comedy Knocked Up for the announcement