Love Island star Cara De La Hoyde has revealed that she and husband Nathan Massey were left stranded in Florida after their flight was cancelled due to the COVID-19 pandemic.

The pregnant star, 29 took to Instagram Stories on Monday to reveal that she and Nathan, 27, managed to get onto another flight back to London, only for the plane to be grounded due to a technical fault.

Luckily Cara went onto reveal that with the help of airport staff she and Nathan managed to get onto another flight the following day, meaning they could finally head home with their son Freddie.

Scary: Cara De La Hoyde, 29, has revealed that she and husband Nathan Massey, 27, were left stranded in Florida after their flight was cancelled due to the coronavirus pandemic

In a slew of posts, Cara revealed that after receiving no information from her airline about when she and Nathan would be flying home, they turned up at the airport to book a replacement flight.

Despite getting on the plane, it was grounded due to a technical flight, meaning they missed their connecting flight in New York.

In a slew of videos, Cara explained that rather than try and fly to New York, they decided to stay in Florida for an extra day, having learned that the city had been one of the worst affected during the coronavirus pandemic. 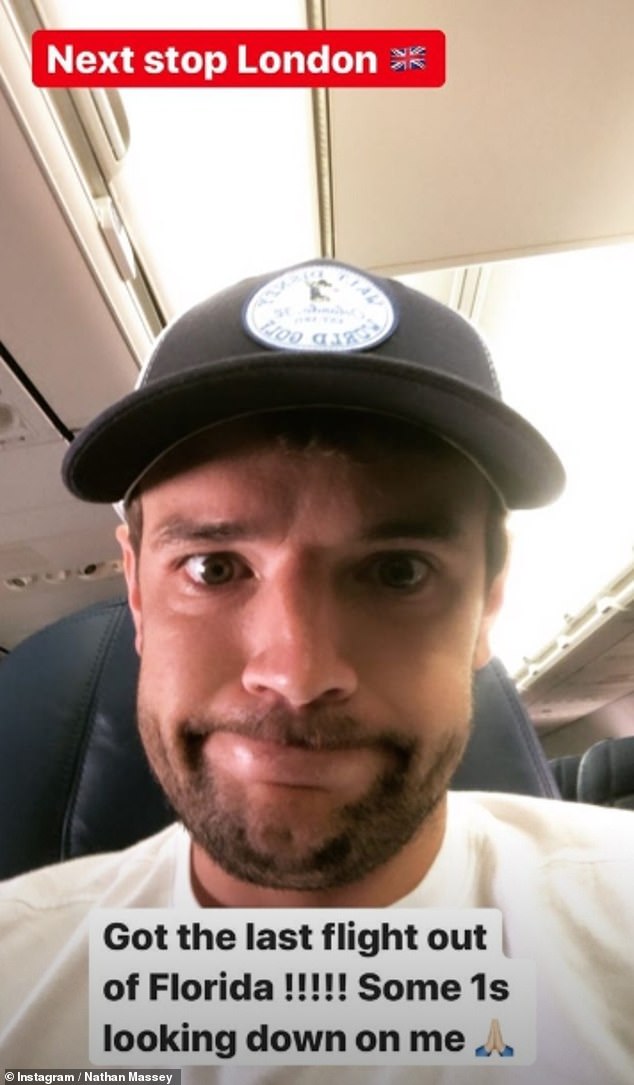 Not there yet! The couple documented their tumultuous attempts to get a flight home after their original flight was cancelled 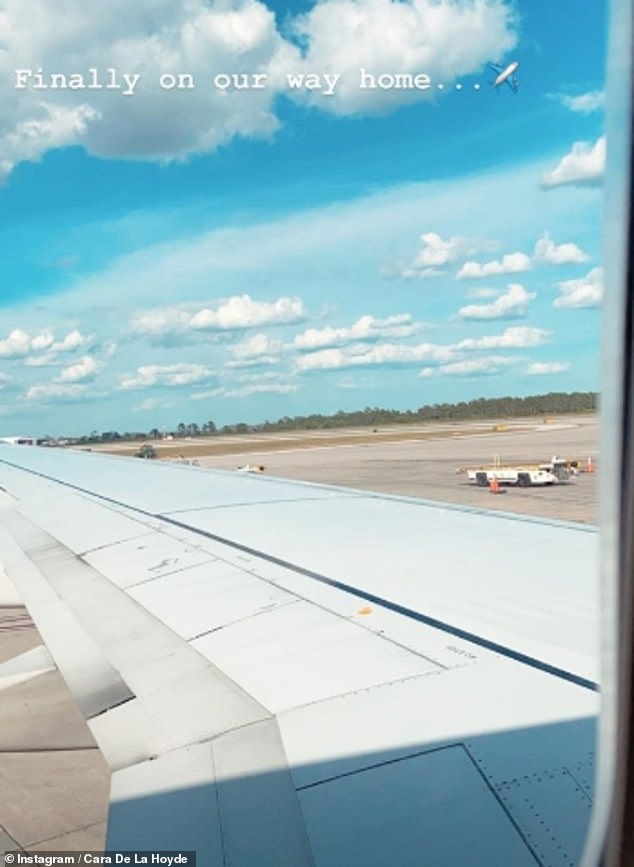 Going…: At first it seemed Cara and Nathan managed to get a replacement flight, as they shared a snap from the plane window 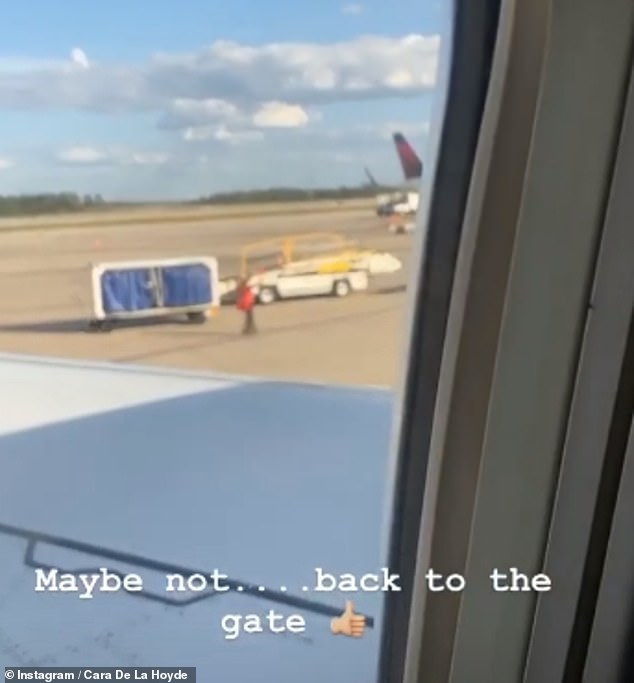 … Not Gone! But it was then revealed that their plane had been grounded and taxied back to the airport due to a technical fault 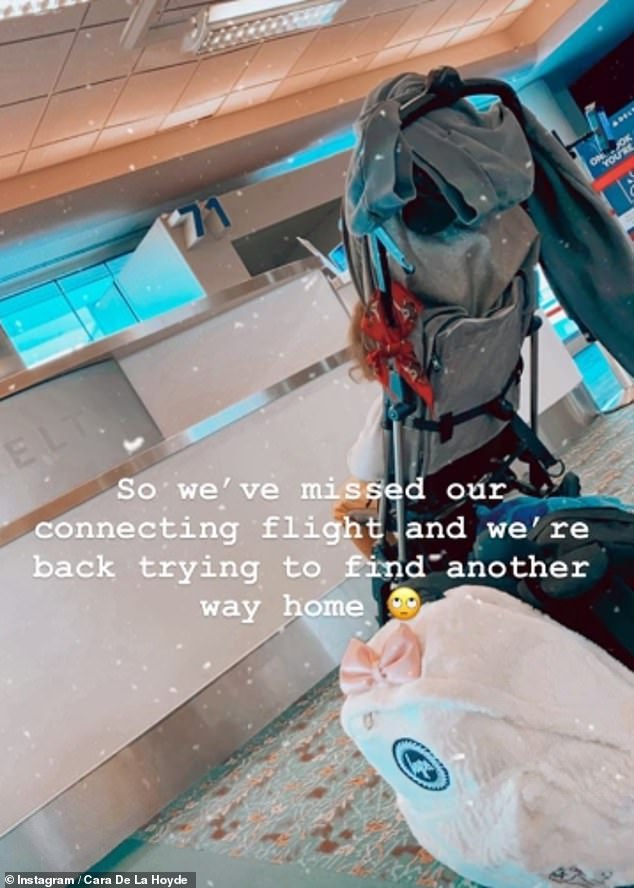 Unfortunate: Back in the airport, Cara told her followers that she and Nathan were desperately trying to book a replacement flight

The star first shared a snap of her airplane window, with the caption: ‘Finally on our way home.’

But it seemed it wasn’t to be as she shared another video of the plane with the caption: ‘Maybe not… back to the gate.’

Posting a snap from inside the airport, Cara wrote: ‘So we’ve missed our connecting flight and we’re trying to find another way home.’ 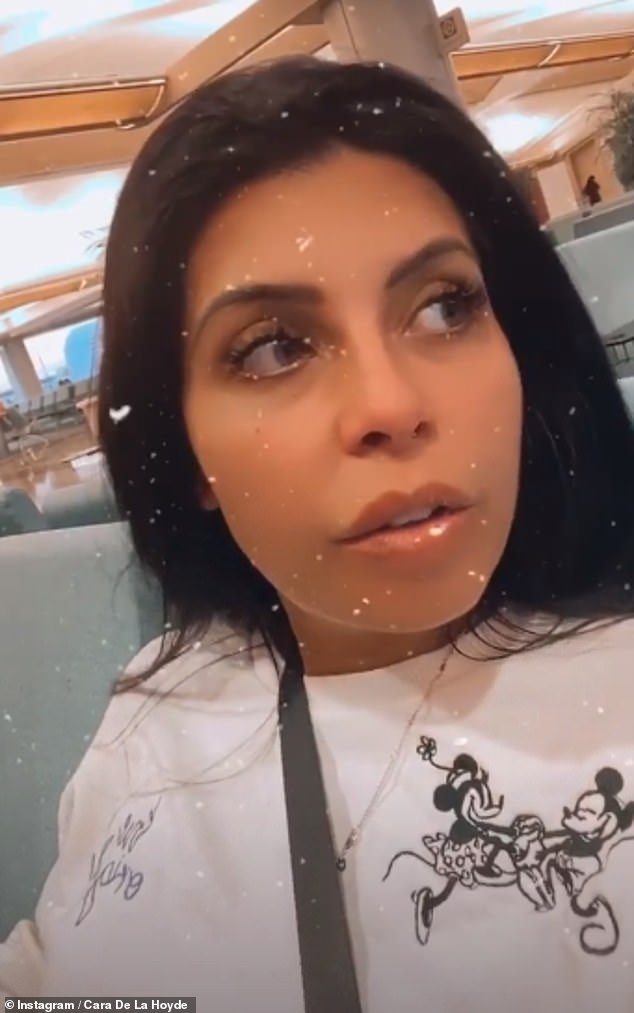 Worrying: Cara then shared a lengthy video explaining that she and Nathan had to book another flight after their airline failed to get in touch about their current one 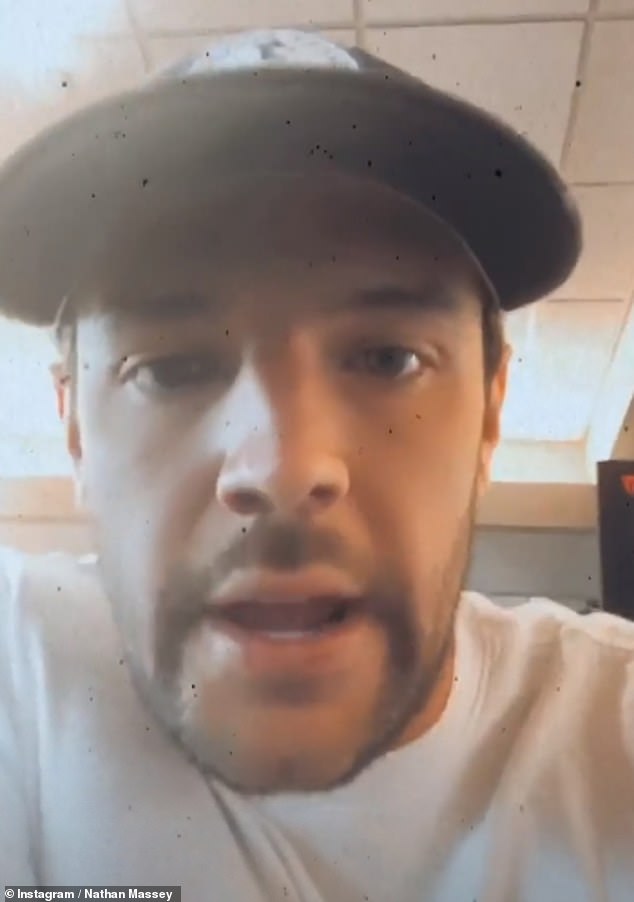 Annoying: Nathan also explained that they had been booked on a flight to New York before catching a connecting one to London

She then told fans: ‘So guys couldn’t write it, no filter is making me look any better. Got on the flight, which we got off our own back cos Virgin didn’t contact anyone, thanks Virgin!

‘Loads of stranded English people on the flight, in exactly the same position, no one’s heard from Virginso people are just taking up open themselves to turn up in the airport and sitting there to see what happens.’

‘Got on a flight to JFK, got to the runway and said there was a issue with the engine so we had to go back and fix it, went back and fixed it and said ”right it’s fine we’re gonna take off,” we’re back to the runaway again and said nope we’ve gotta go back and reset all the engines so that meant we was gonna miss our connecting flight.’ 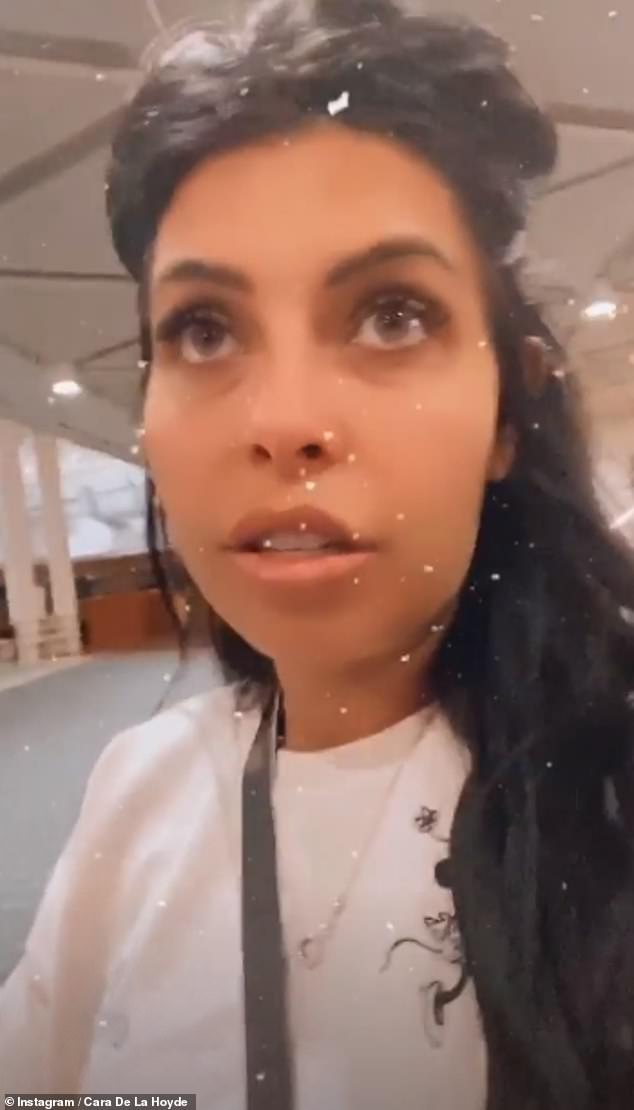 Drama: Cara then shared that she and Nathan decided to stay in Florida rather than be stranded in New York, which has been hugely affected by the spread of the virus

Cara then explained: ‘So it was like do we stay here and know we’ve got a villa to go back to, and potentially be stuck here for a while or do we got to New York which is one of the worst hit areas.

‘So we took the decision to stay here and a lovely guy called Jean Pierre got us on a flight tomorrow to Atlanta and Atlanta to Heathrow.

‘If you are stuck out here guys please don’t wait for Virgin we are useless they’re not helping anyone else at all. You need to get yourself ready get your cases packed and get to Orlando Airport and go to the Virgin desk, they’re really helpful here.’ 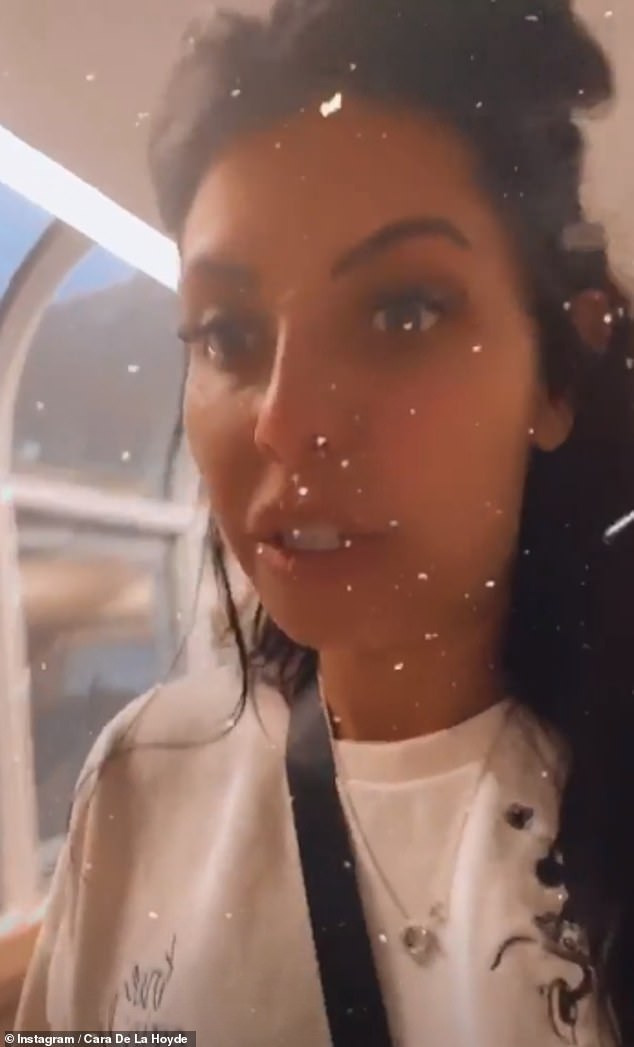 Close call: The expectant star added that eventually she and Nathan had been booked onto another flight to Atlanta the next day, before catching a connecting flight to London

Nathan also praised the airport worker, jumping into the video to say: ‘Jean Pierre Delta I love you so much, give him a pay rise.’

The star also shared his own videos documenting the chaos, telling his followers: ‘So the plane had a fault on it we had to turn round so now we’re really screwed to just waiting until we get another flight, but it’s not looking great.’

Luckily it seemed the couple did manage to get on a flight home, after several weeks soaking up the sunshine in Florida with Freddie. 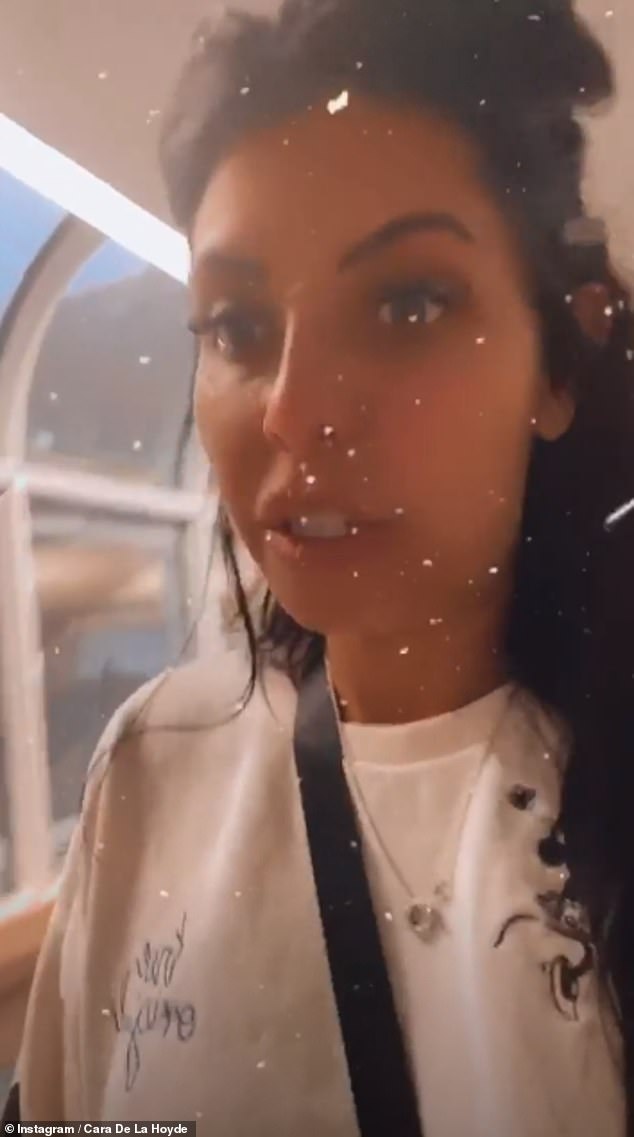 Things are looking up: Since the updates on their replacement flight, it seemed that Cara and Nathan did manage to return to the UK safely 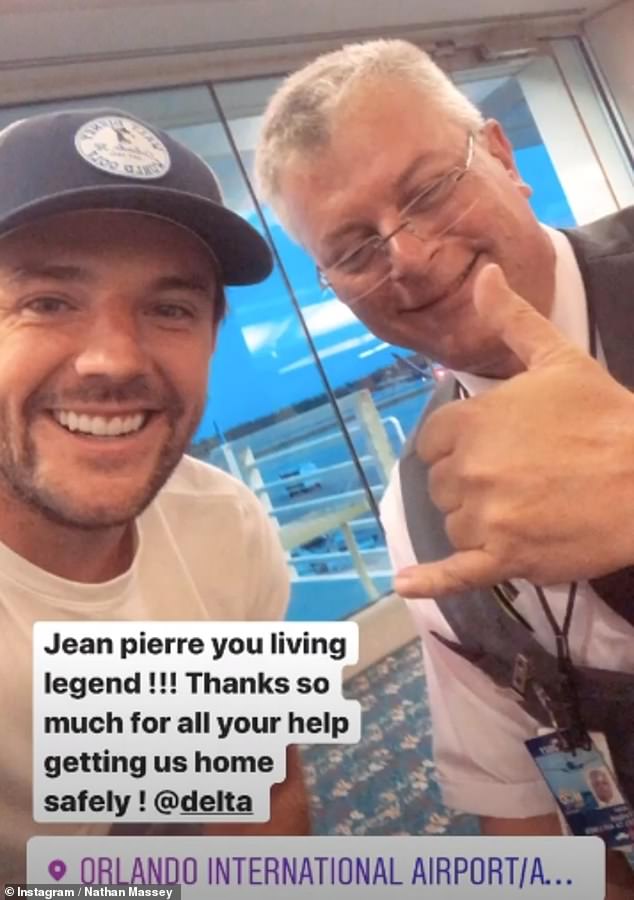 Elated: Nathan also praised the help of an airport worker for assisting them in finding another plane back to London

During their getaway Cara and Nathan also announced that they were expecting their second child, which the star hopes will be a girl.

Speaking to new! magazine, Cara said: ‘I’m just too impatient. If we had a boy and a girl and went for a third, we’d be like, “Let’s have a surprise.” But we really want a girl.’

Nathan added: ‘We want to find out the sex because you can paint their room and buy their clothes.’

Cara found out she was pregnant while the couple were staying in a hotel in Leeds before she woke Nathan up at five in the morning to tell him.

The Love Island star told how she took two pregnancy tests before going for an early scan and added that she is now thinking about having a home birth. 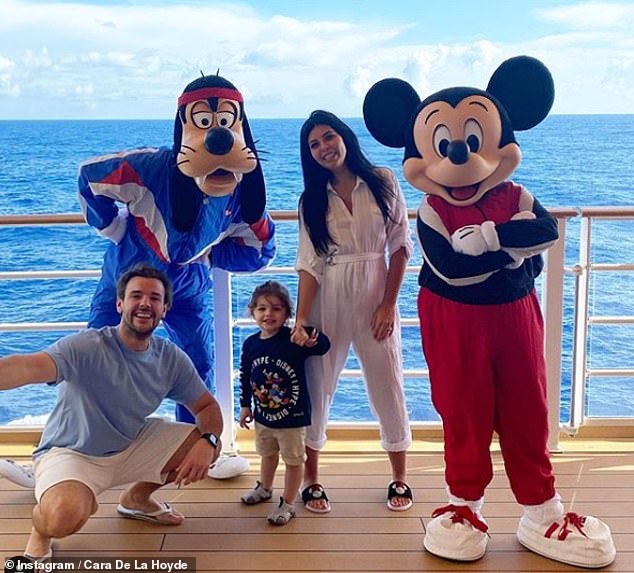 Fun times: Cara and Nathan had travelled to Florida for a fun-filled family getaway with their son Freddie, two, and during the trip also announced that they expecting their second child