She is expecting a child with her husband Russell Wilson.

And on Sunday, Ciara put her growing bump on full display in a glamorous black and white gown by Stephane Rolland for the American Music Awards.

The singer, 31, revealed she has already chosen a name for baby, as she lovingly cradled her belly in the asymmetrical frock, which featured a jersey top and a voluminous skirt.

Beaming beauty: Ciara put her growing baby bump on full display in a glamorous black and white gown by Stephane Rolland for the American Music Awards on Sunday in Los Angeles

The I Bet artist announced her pregnancy on her birthday in October – via social media.

This is Ciara and NFL player Russell’s first child together; she is mom to two-year-old son Future Zahir with her ex-fiance rapper Future.

The singer admitted they know whether they’re expecting a boy or a girl, but she doesn’t want to tell anyone.

Asked if they’ve chosen a name, she added: ‘We’ve already done that actually.’ 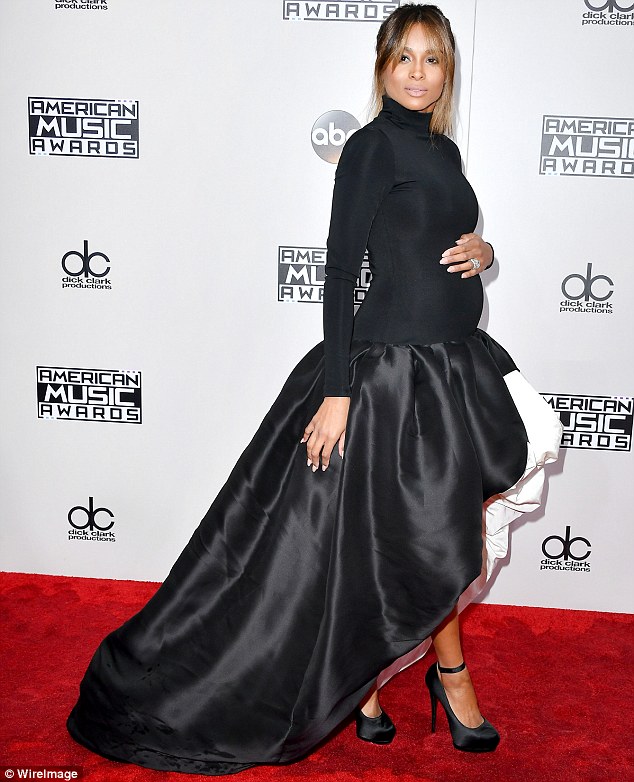 A bundle of joy on the way! The pregnant singer, 31, lovingly cradled her belly in the turtleneck-style frock, which featured a voluminous skirt and long sleeves 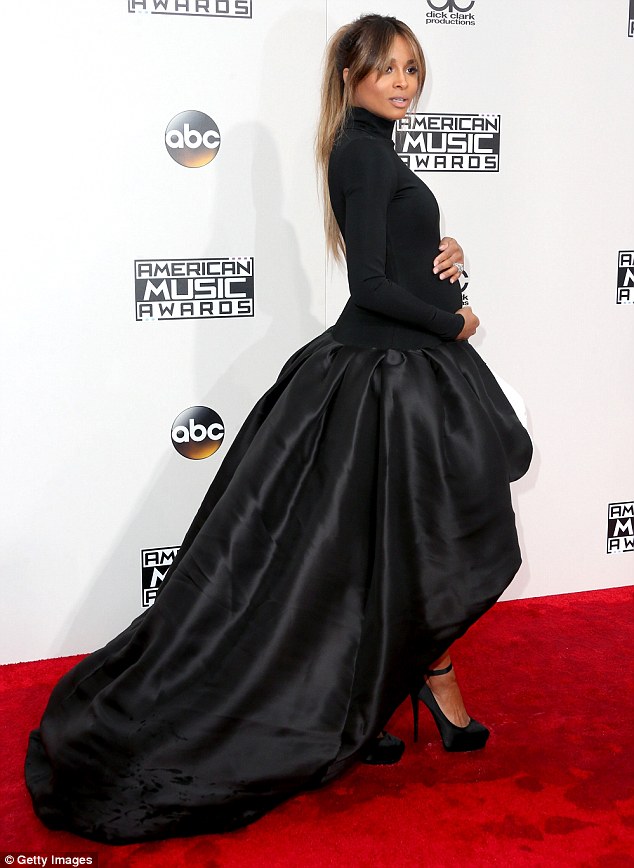 Fancy: The I Bet artist announced her pregnancy on her birthday in October – via social media

And the Goodies singer and Russell, 27, aren’t the only ones excited about the new addition to their family as little Future ‘can’t wait’ to be a big brother.

Ciara told Entertainment Tonight: ‘He rubs my belly and he says, “Hi baby. I love you, baby,” … and then he puts my shirt down and says, “Bye, bye baby.” So, that’s his own thing.

The top half of the musician’s dress was skintight while the lower half had a voluminous skirt made out of taffeta.

The skirt had white elements with an asymmetrical hemline, revealing Ciara’s toned legs and her black Mary Jane heels. 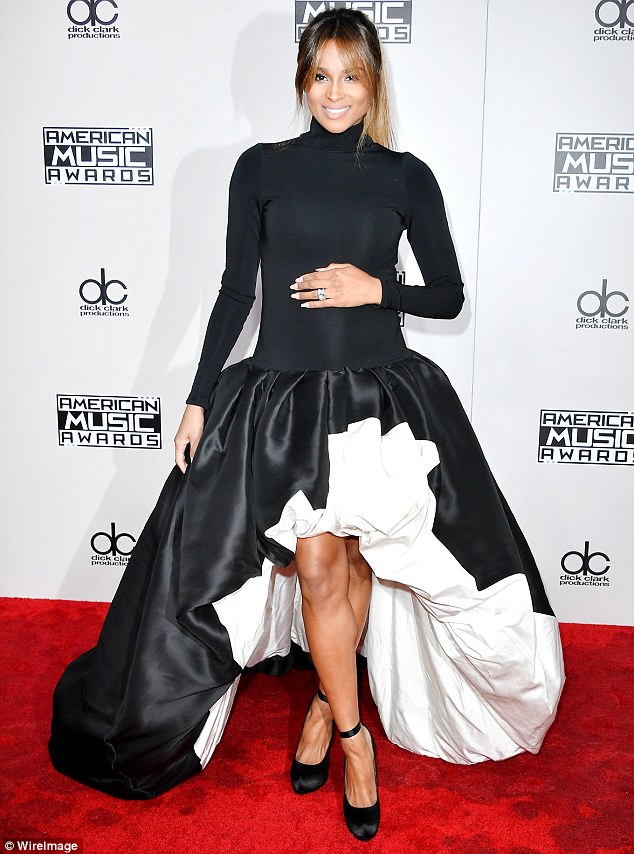 Wow: The top half of the musician’s dress was skintight while the lower half had a voluminous skirt made out of taffeta

The pregnant stunner styled her brunette tresses in a sleek ponytail with her fringe center parted.

She painted her full pout with pink lipstick with shimmering eye makeup.

After struggling with nausea in the first few months of her pregnancy, Ciara is thankful to be feeling ‘really good’ now.

Debuting her bump at the American Music Awards , she said: ‘I’m feeling really good, the first few months were a bit tough for me.

‘Well, not tough, but a bit more like, I didn’t throw up last time and this time I haven’t thrown up but I’ve had that in between feeling where I don’t wanna throw up, I can’t throw up but I’m not normal and that’s even more torture. 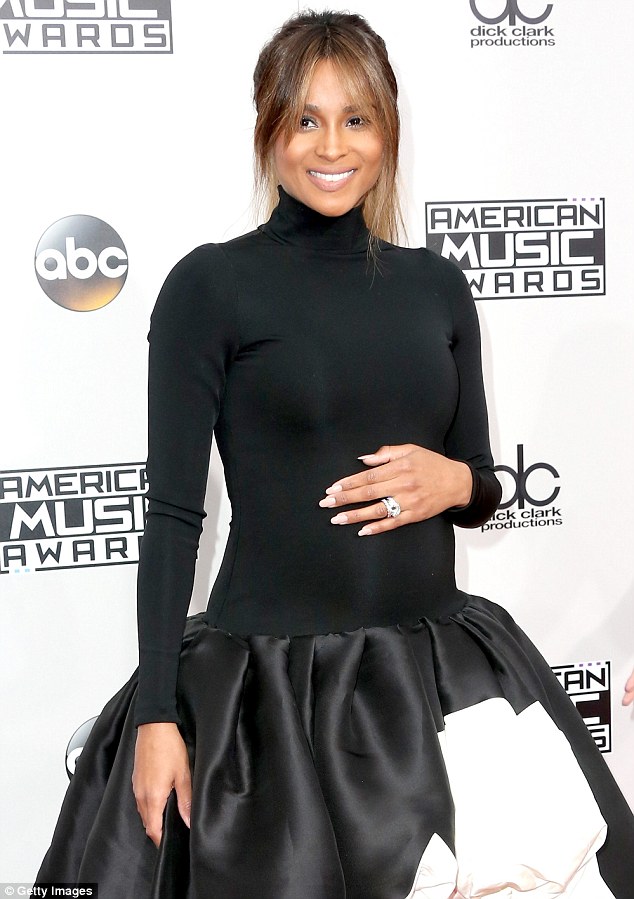 Flawless: This is Ciara and Russell’s first child together; s he is mom to two-year-old son Future Zahir with her ex rapper Future 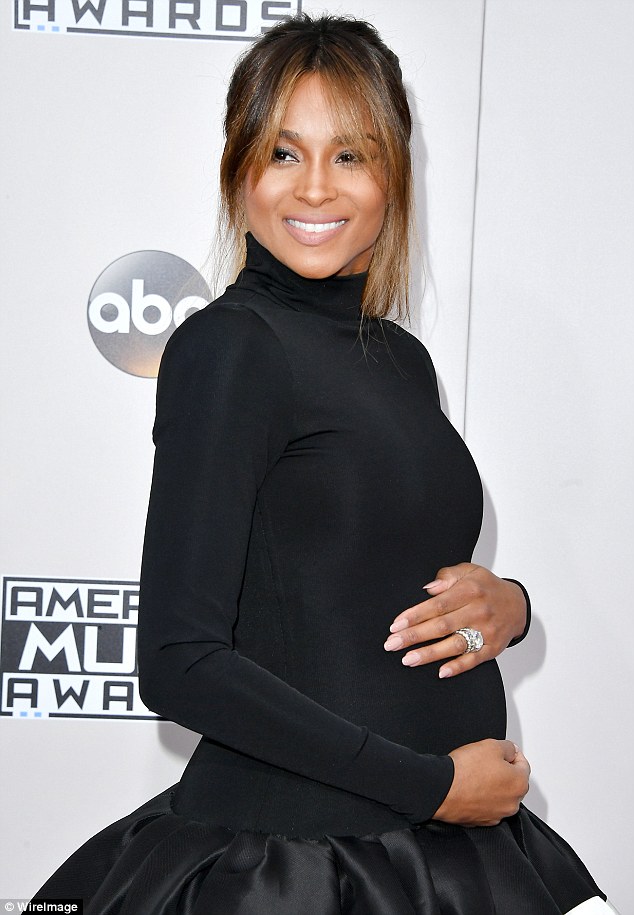 ‘I’m now in that place where I’m not feeling that feeling and I’m not that tired so it’s good.’

The starlet, who is a presenter at the awards show, said that she’s ‘happy to be here tonight.’

While she had some nausea during her pregnancy, the beauty said ‘you gotta push through it and be strong.’

Adding that ‘when I’m working, my adrenaline keeps me going.’ 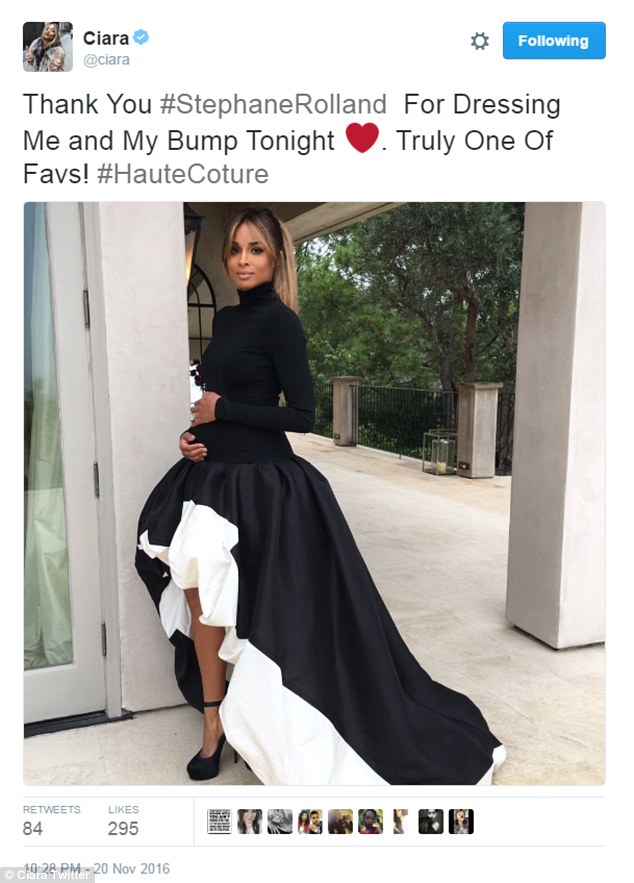 Glowing: The songstress shared this snap during the night to give a shout out to designer Stephane Rolland

When asked if she’s had any specific cravings, Ciara said that while she’s been loving water with lemon, she loves to eat and that ‘I take advantage of it when I’m carrying.’

The mother of one started dating Russell, a professional football player, in early 2015.

The songstress and the Seattle Seahawks quarterback tied the knot on July 6, 2016 in England. 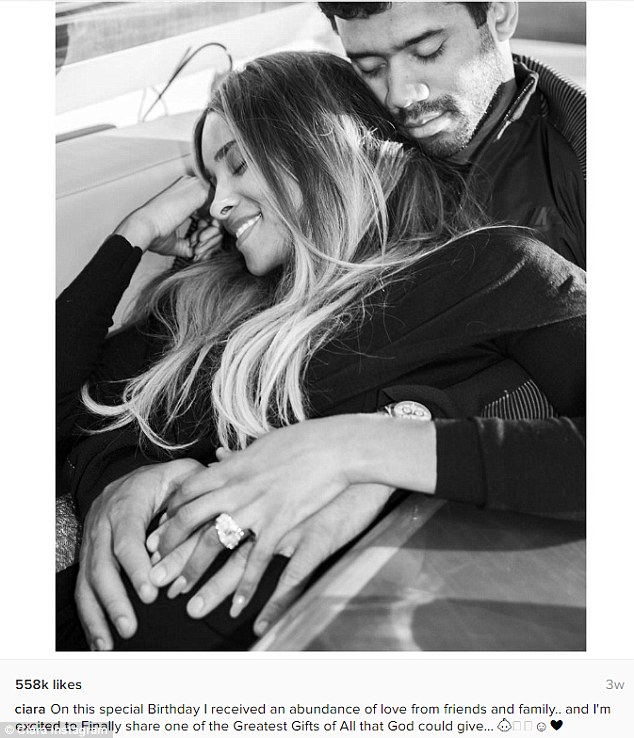 Happily ever after: Ciara announced her pregnancy with a sweet photo she shared on October; pictured with Russell Wilson 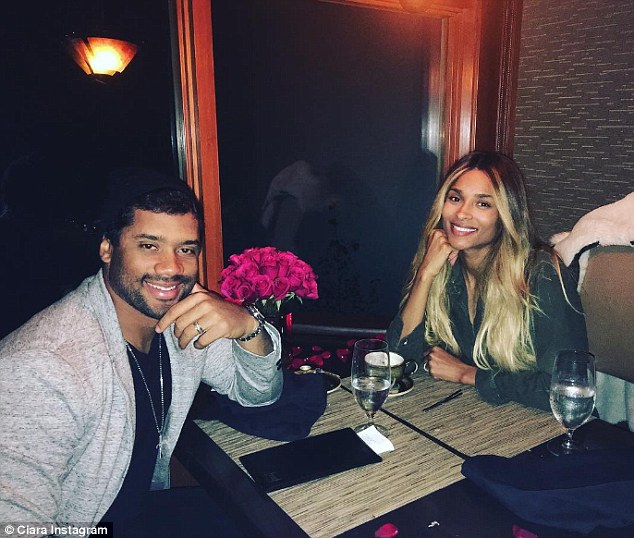 What a sweet photo! The lovebirds tied the knot in July 2016 in England

ARTIST OF THE YEAR

NEW ARTIST OF THE YEAR UN-LEASHED BY T-MOBILE

COLLABORATION OF THE YEAR

The Chainsmokers Featuring Daya ‘Don’t Let Me Down’

TOUR OF THE YEAR

VIDEO OF THE YEAR

Drake & Future ‘What A Time To Be Alive’