Mandy Moore was honored with the Virtuoso Award during the 2nd Annual HCA TV Awards which were held at The Beverly Hilton earlier Saturday night.

The talented actress, 38, was handed the award from her This Is Us co-star, Milo Ventimiglia, as she walked on stage.

The mom of one, soon to be two, was the honoree of the special award due to her exceptional work throughout her career in the industry for the past two decades.

The star was honored with the Virtuoso Award, which is given to an, ‘individual who has cultivated the industry with their talent that expands well beyond a singular role,’ according to Deadline.

Scott Menzel, the HCA Founder, explained that the actress received the award due to her transformation throughout her career.

‘Moore’s talent is undeniable, and her work on This Is Us solidifies that as she was able to combine all of her talents within this final chapter that included a multifaceted performance that left millions around the world in tears.’

Mandy accepted the award from Milo, who also played her on-screen husband in the popular NBC series, with an excited smile. 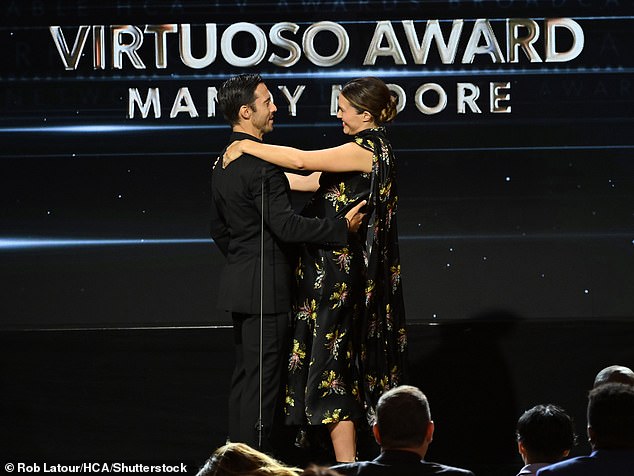 Reunited: The actress and her This Is Us co-star were seen hugging on stage as he handed the special award to the honoree 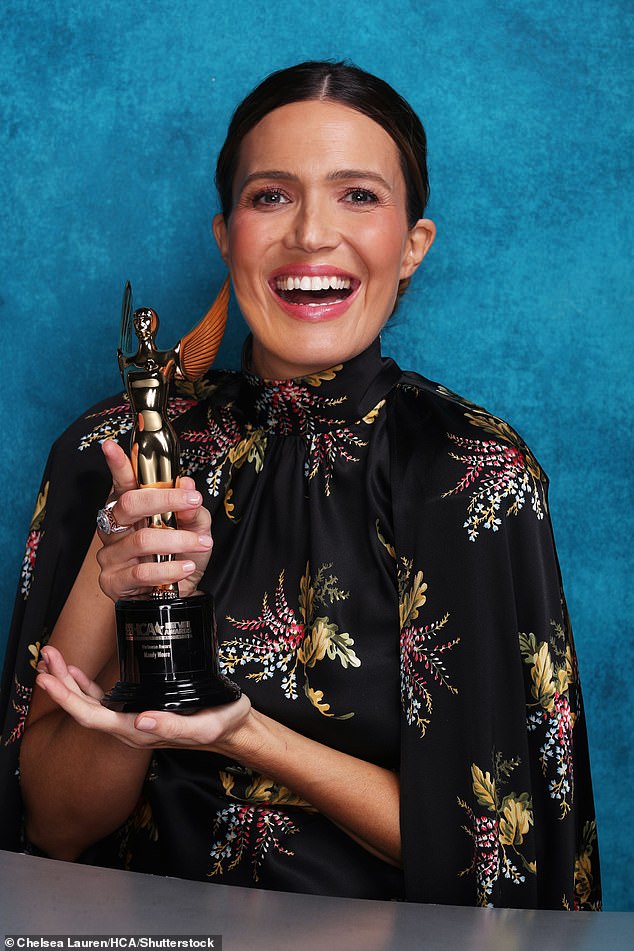 So happy! The television and movie actress held her Virtuoso Award in her hands as she posed for a professional portrait 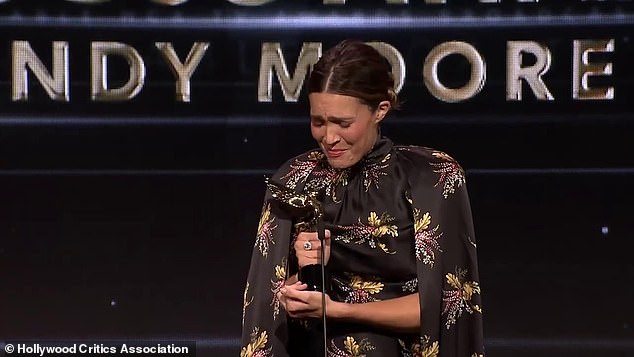 Touched: When she was handed the special award, the star gave a heartfelt speech of gratitude

After receiving the award, Mandy gave a heartfelt speech, talking about how touched she was.

‘This is wild,’ she stated. ‘I’m so honored just to be invited to the party let alone have the chance to be up here is just beyond my comprehension.’

She then opened up about how long she has been working in the entertainment industry, having starred in movies such as The Princess Diaries (2001), A Walk To Remember (2002), Tangled (2010), and Because I Said So (2007).

She also is known for her incredible voice, and has released music albums including Mandy Moore (2001) and In Real Life (2022).

‘I’ve been doing this for 23 years…but the last six years undoubtedly have just been the most momentous of my career,’ she stated, referencing to her most recent NBC drama series, This Is Us. The show aired its final and sixth season earlier this year. 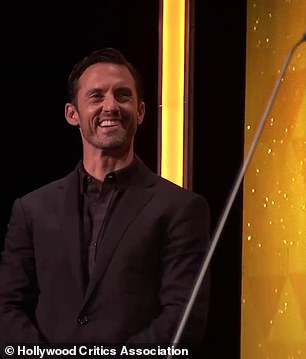 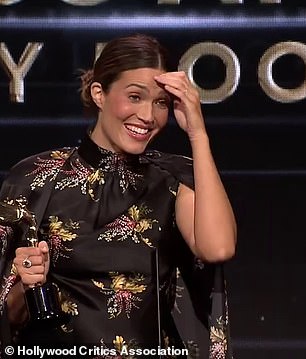 Proud: Milo was seen sending a proud smile towards his co-star during her speech 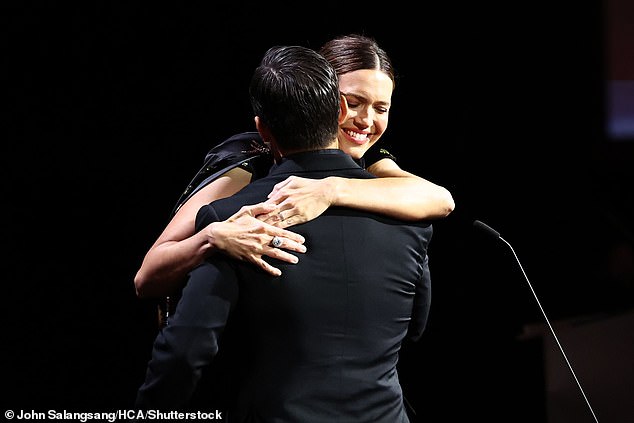 Successful career: Mandy began her career in the industry 23 years ago, and has various talents, such as acting and singing 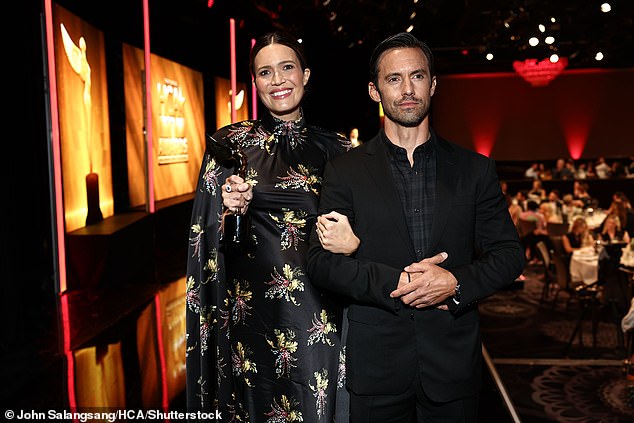 Together again: The two actors, who played husband and wife on screen in This Is Us, were seen pictured together after she received the Virtuoso Award 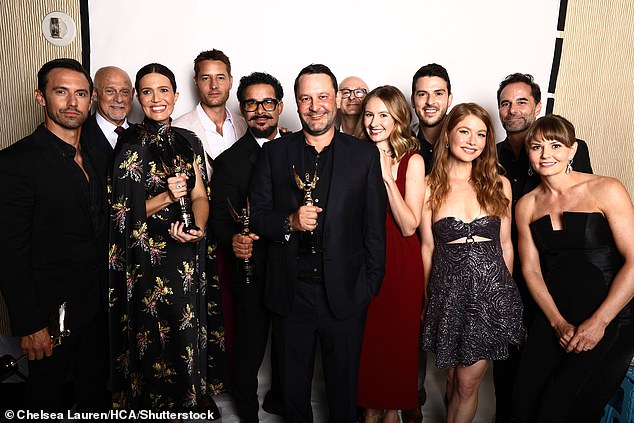 Cast photo: Mandy was pictured with the cast of This Is Us as they were reunited at the HCA TV Awards on Saturday night

She also gave a shoutout to Milo, adding, ‘You have been the ultimate partner and TV husband and it has been an honor to get to do this with you for six years.’

Earlier in the evening, the stunning actress walked the red carpet, showing off her elegant style.

Mandy wore a long, black gown with a floral pattern, showing off her growing baby bump. The high-necked dress contained cape sleeves and fell down towards her ankles.

She slipped into a pair of black, open-toed heels to complete her overall look for the night. Her hair was parted in the middle and pulled into a sleek up do. 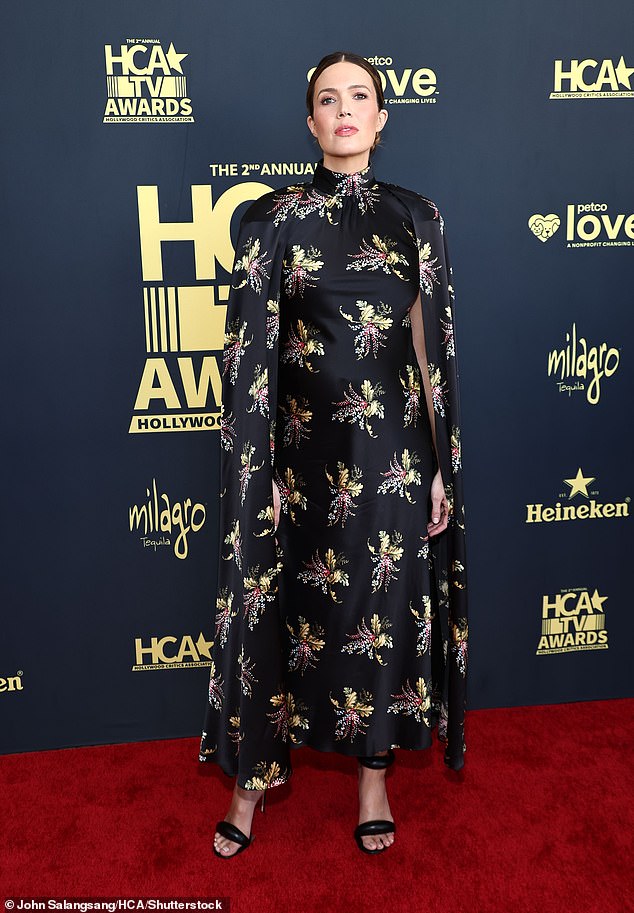 Stunning: Mandy looked elegant as she stepped onto the red carpet at the 2nd Annual HCA T Awards in Beverly Hills on Saturday

Baby bump! Mandy showcased her growing baby bump as she walked the red carpet, and is expecting baby number two this fall 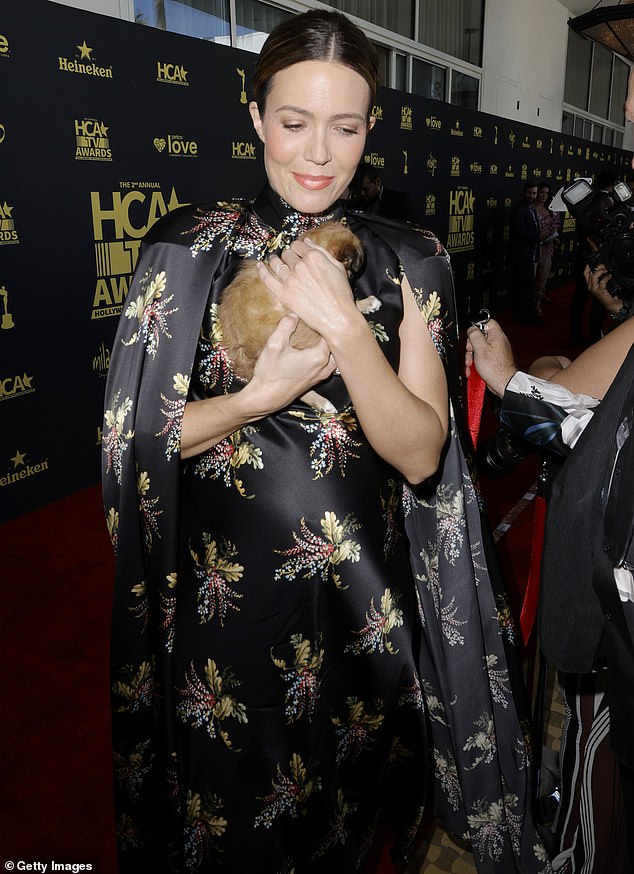 Cute! At one point as the mom of one, soon to be two, walked the red carpet, she was seen holding a tiny puppy in her arms

Milo kept his red carpet look classic and simple, wearing an all black suit and a dark-colored dress shirt underneath.

He slipped into a pair of shiny black shoes and slicked his hair back to complete his look.

Other This Is Us alum attended the star-studded ceremony, including Justin Hartley. He had his wife and actress, Sofia Pernas, by his side.

He donned dark pink dress pants and added a white dress shirt covered by a light pink blazer. His wife, whom he tied the knot with last year in 2021, stunned in a strapless, white gown with a high slit on the side.

Stylish: Milo Ventimiglia wore a black suit and dark dress shirt underneath as he attended the HCA TV Awards 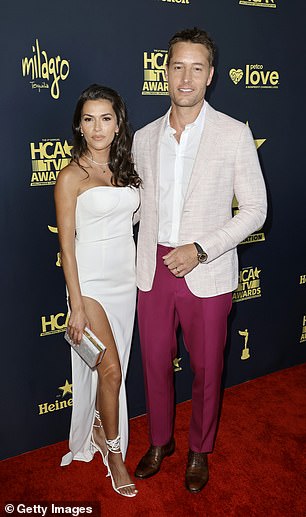 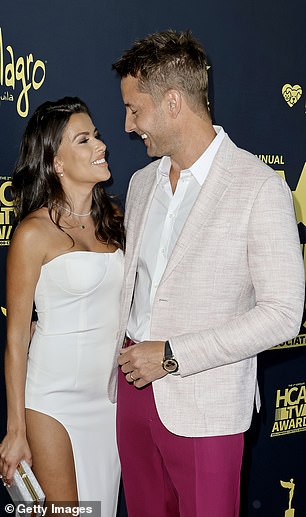 This Is Us star: The actor is also notably known for his tole on the NBC series which ended its last season, and for also starring in Smallville 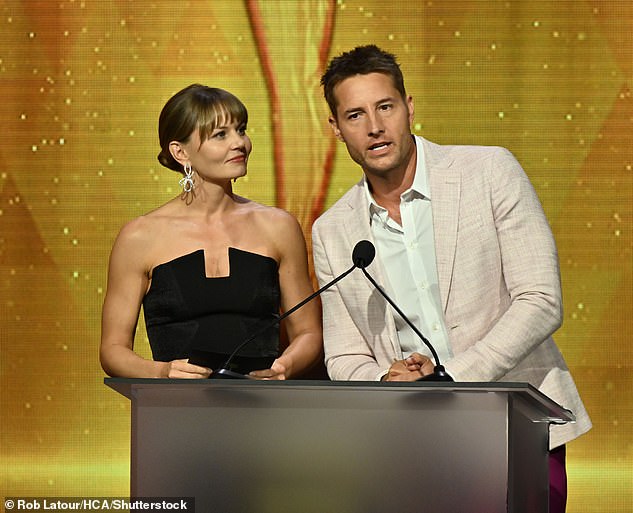 Presenters: Justin and actress, Jennifer Morrison, were pictured presenting one of the HCA Awards during the ceremony 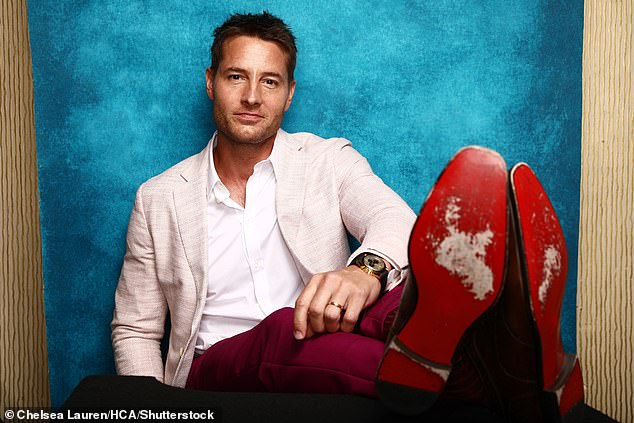 Quick pose: The actor posed for a portrait backstage during the 2nd Annual HCA TV Awards