Mollie King is preparing to welcome her first child with her fiancé Stuart Broad.

And on Sunday the former Saturdays singer, 35, stepped out in a glamorous blue figure hugging midi dress as she arrived at BBC Radio 1 in London on Sunday.

The beauty, who presents a weekend Radio 1 show with Matt Edmondson, seemed in high spirits as she strutted inside in a pair of towering pair of nude heels.

Looking good: Mollie King stepped out in a glamorous blue midi dress as she arrived at BBC Radio 1 in London on Sunday

Mollie carried her belongings in a tan crossbody bag and hid behind a pair of dark sunglasses.

She styled her long blonde tresses in loose waves as they cascaded past her shoulders from a centre parting.

Mollie recently appeared on Lorraine alongside her  co-host Matt, who she revealed had no idea she was pregnant despite seeing her for work every day on the set of their new show Beauty And The Geek. 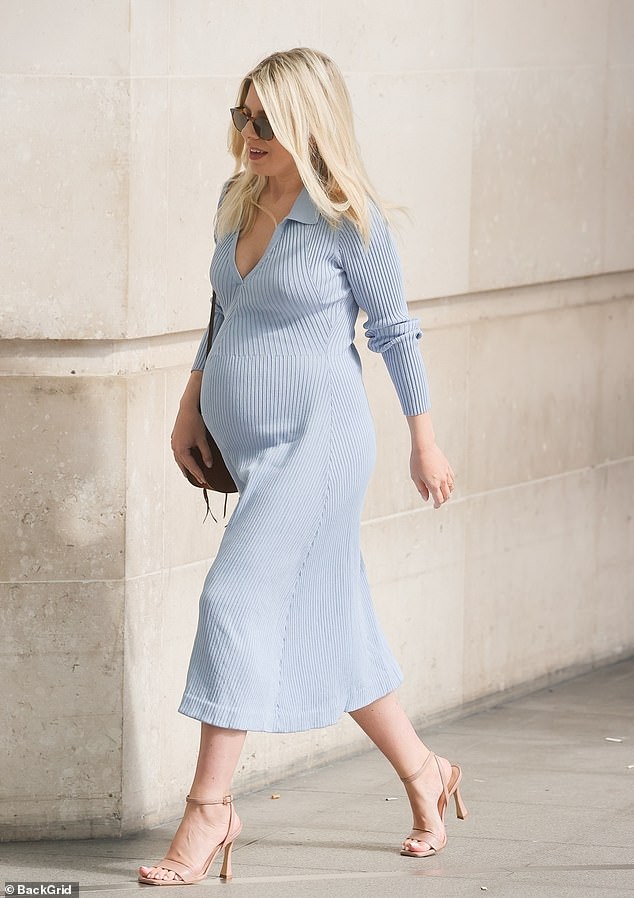 Incredible: The former Saturdays singer, 35, who is expecting her first child with her fiancé Stuart Broad, showcased her blossoming bump in the glamorous number 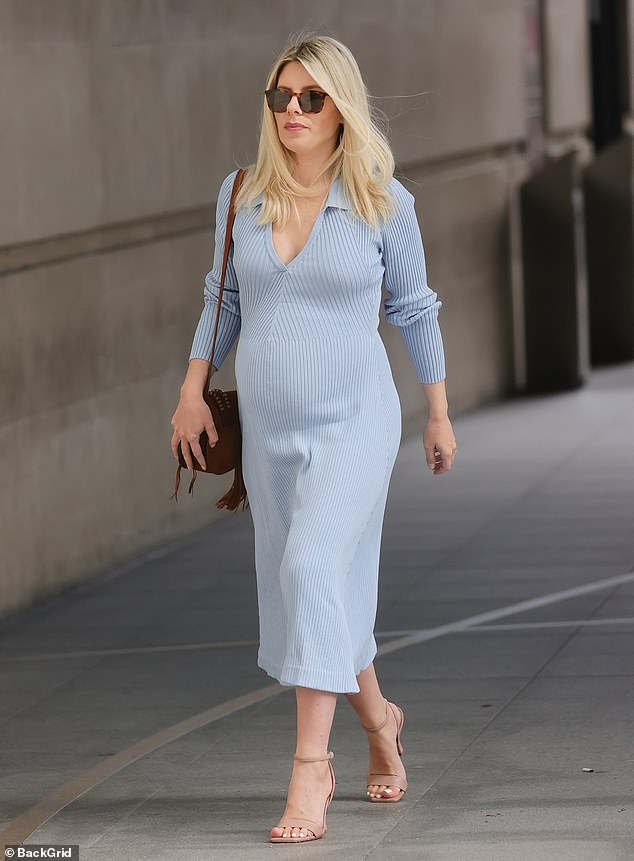 Stunning: The beauty seemed in high spirits as she strutted her stuff in a towering pair of nude heels complimenting the love sleeved number

Mollie said: ‘I wanted things like apples and pizzas. Apples on pizzas could be good … I was pregnant whilst filming the series and I was sure that Matt knew about it because we were together every day. He was completely oblivious.’

Matt admitted that, looking back, there were ‘loads of clues’, including that Mollie’s eating habits changed and she started taking frequent nap.

He said: ‘You stopped drinking coffee, your diet was different to normal. She took naps all the time. 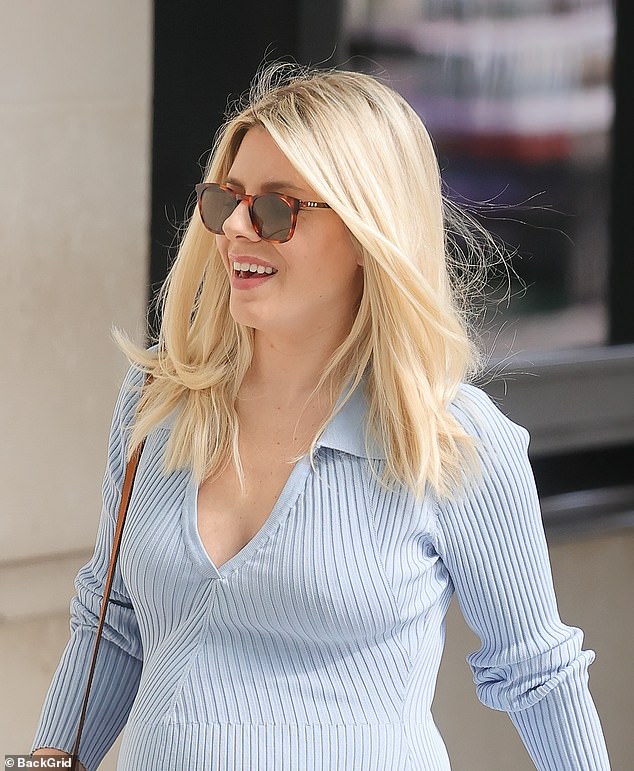 Chic: Mollie carried her belongings in a tan crossbody bag and hid behind a pair of dark sunglasses 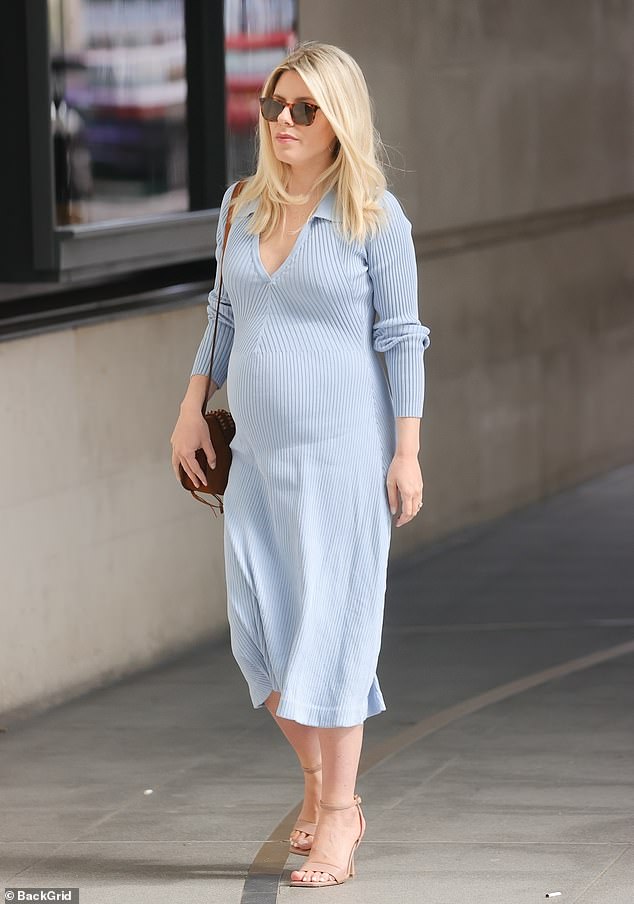 Stylish: She styled her long blonde tresses in loose waves as they cascaded past her shoulders from a centre parting

And she put on the audiobook of Bridget Jones’ Baby.

‘All the clues were there, but it came as a big surprise when she told me.’ 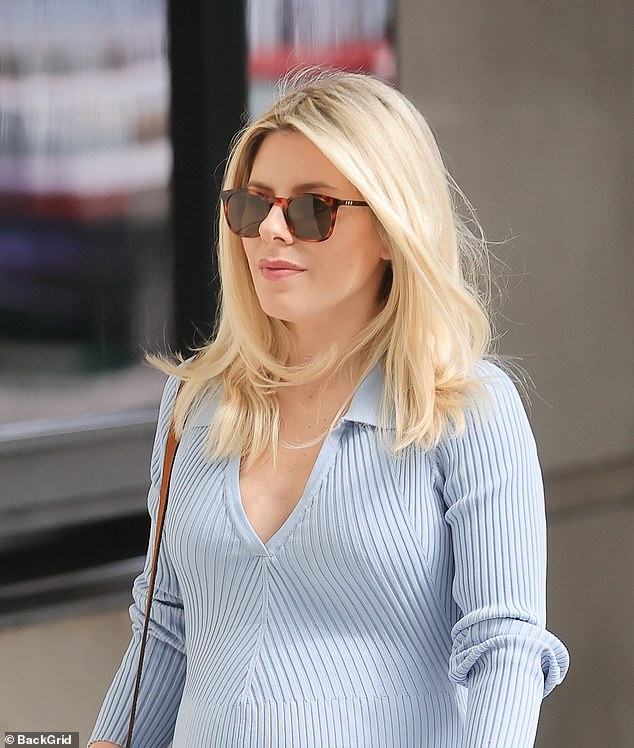 Glam: Mollie opted for a radiant palette of makeup including a swipe of pink lipstick

The singer took to Instagram in June to announce the happy news that she and her beau were expecting a baby together.

Alongside a black-and-white image of Stuart kissing the baby bump, Mollie wrote: ‘Stuart and I are so so happy to share that we’re expecting a baby later this year! We’re absolutely over the moon.’

Meanwhile, Stuart shared the same photo to his Instagram and wrote: ‘Mollie I are thrilled to be expecting a baby at the end of the year! Exciting times ahead!’

The Ego hitmaker was first linked to Stuart back in 2018 before confirming that they were officially dating the following year.

They announced their engagement on New Year’s Day 2021.

After he popped the question, she shared: ‘A thousand times yes!

‘I still can’t believe it, the most magical start to the new year! I can’t wait to spend all my years with you!’ 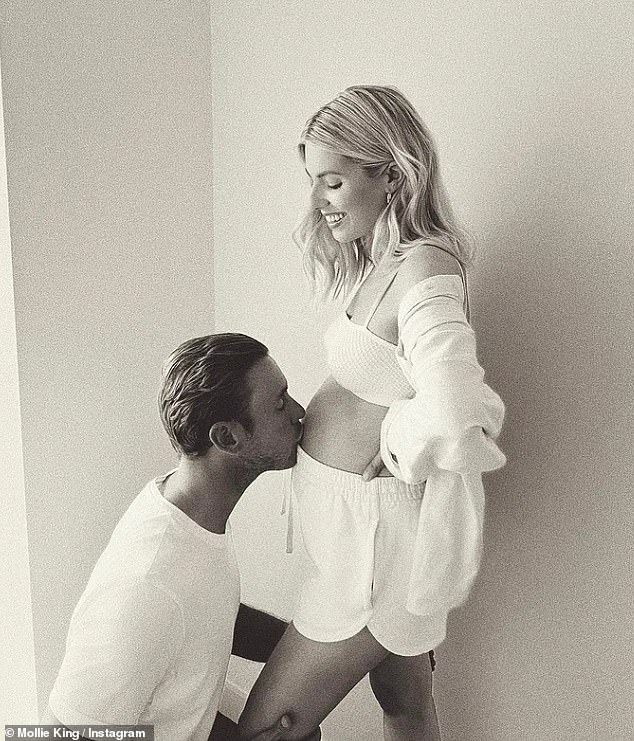 Congratulations: Mollie revealed she was expecting her first child with her fiancé Stuart Broad back in June