‘Chris, u need 2 talk 2 me before baby is born’: Pregnant woman daubs graffiti around Australian town begging her unborn baby’s father to get in touch – leaving baffled locals wondering who the mystery man is

A spurned mum-to-be has taken her quest to make amends with her lover to extreme lengths – covering her town with a graffiti appeal for ‘Chris’ to come back ‘before the baby is born’.

Spray-painted huge lettering appeared across walls, local parks, a BBQ area and public bathrooms over the weekend urging the unknown man to get in touch.

The brazen notes written in purple spray paint read ‘Chris u need 2 talk 2 me b4 baby is born or don’t bother after’.

The vandalism was shared on social media by residents of Frankston in Victoria, Australia, who appealed to Chris to ‘just call her before she destroys the whole city’.

An unidentified mother-to-be has spray painted a desperate plea to a man called ‘Chris’, asking him to get in touch before her baby, which presumably he is the father of, is born

On one occasion, with a school in the background, the desperate message sits beneath three empty bottles of beer and one bottle of what appears to be vodka.

The unusual plea has now been shared, like and commented on more than 30,000 times as locals try to reunite Chris with his pregnant former lover.

Peter Burrows, who discovered some of the graffiti and shared photos of it online, claims more ‘hilarious’ vandalism popped up over the weekend, with the last being discovered on Sunday. 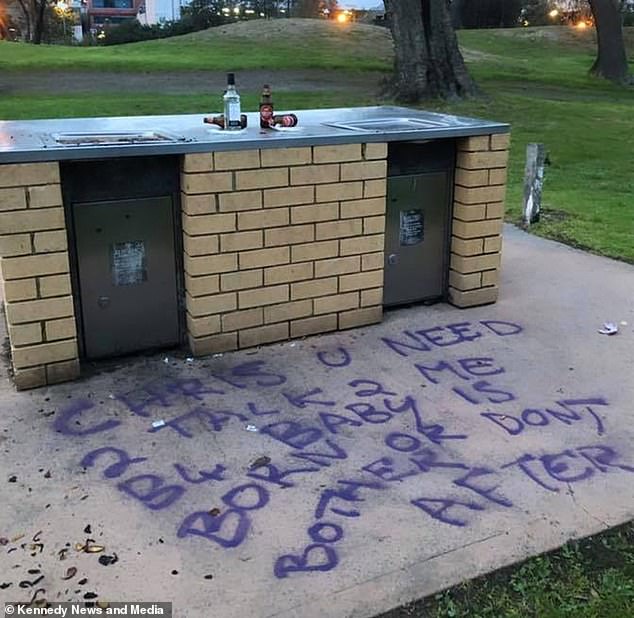 The messages were littered across the streets of Frankston in Victoria, Australia. Residents spotted them on walls, BBQ areas, and public bathrooms

‘[Some] locals are not impressed as it’s ratepayers that are paying for the clean up when resources could be used elsewhere.

‘However most now just want to know who Chris is and if he called her back.

‘We initially posted it because we believe this is not only a waste of money, but also the time of the council officers.

‘My post was a little cheeky and it seems to have gained a lot of interest.

‘We’re appealing to find Chris and beg him to come forward.

‘He’s likely he’s broken up with [the woman] and she wants to get him to call, or it’s just some teenagers mucking around. 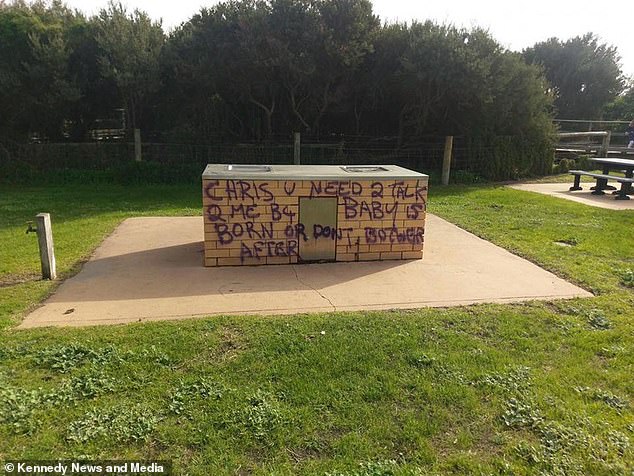 Peter Burrows, who discovered some of the graffiti and shared photos of it online, claims more ‘hilarious’ vandalism popped up over the weekend, with the last being discovered on Sunday

‘[The graffiti] is popping up all over town. We posted two photos and the other two were sent in by local community members.

‘It has showed up over the past three days or so in Frankston.

‘It was reported to council and there’s been more popping up. It has already appeared in local parks, lane-ways and public bathrooms.

‘We know there’s someone trying to find Chris, and in doing so has destroyed a lot of public property.’

While the post appears to be a huge mystery for Frankston’s 142,000 residents, it has since gone global.

Now, social media users worldwide are speculating on the identity of the elusive Chris and his expectant partner.

Melissa Kellett said: ‘I need to know what happens next. Will Chris call? Will she keep her word of blanking Chris once the baby is born?’ 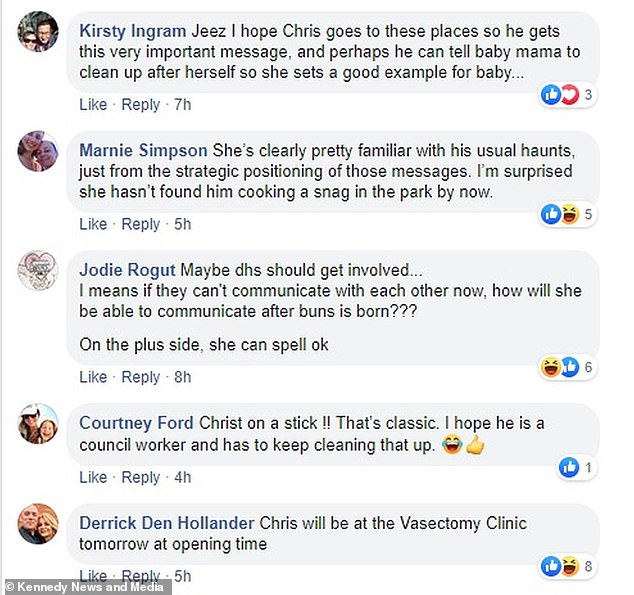 Residents of Frankston have taken to social media to speculate on the identity of the man named Chris, with one saying they felt sorry ‘for the Chris’ in Frankston’

Trish Wilson said: ‘Don’t blame him for not calling. I hope this person is going to pay for the clean up. How stupid is this.’

Nyree Hamilton said: ‘I just can’t work out why Chris doesn’t call – she seems like a wonderful person.’

Meegan Williams said: ‘I feel very sorry for all the Chris’s in Frankston about now.’

Derrick Hollander joked: ‘Chris will be at the Vasectomy Clinic tomorrow at opening time.’