Mother-to-be reveals how she restored her beloved childhood cat teddy for her own baby with stain remover, fabric conditioner and a brush – and people can’t believe it’s the same 30-year-old toy

Many of us have a tatty toy from childhood in the memory box that’s too careworn to be displayed, but a mother-to-be has revealed how she carried out an impressive restoration her own beloved teddy with a few simple tools.

Anna Pritchard-Jones, from Wales, explained she wanted to clean her old Kitty Kitty Kitten toy to decorate her baby’s room.

She used a stain treatment, fabric softener and scent boosters to restore the toy, she played with 30 years ago, to its former fluffy glory.

Sharing pictures on the Hinch Army Cleaning Tips Facebook group, she impressed people, who could not believe it was the same toy.

Anna wrote: ‘This was my favourite childhood toy cat. It’s around 30-years-old and very sentimental. I wouldn’t go anywhere or sleep without it as a child.

‘With me now expecting, my parents gave it back to me for the baby’s room.’

‘With a bit of a hand wash in Vanish Oxi powder, fabric conditioner, scent boosters and a good brush afterwards it’s come out so well,’ she went on.

Thanks to her work, the once disheveled cat looked pristine. Anna also said it would be used as a decoration in the nursery. 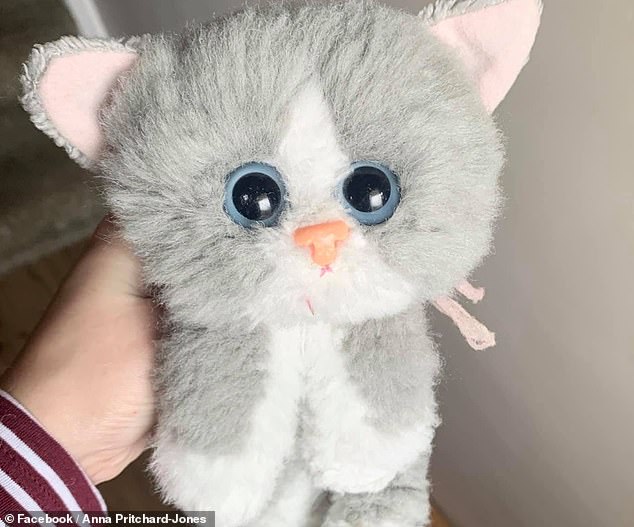 After the treatment, the toy looked brand new and as fluffy as ever. Anna used a teasing brush to fluff the old toy

People could not believe it was the same toy once Anna was done with restoring the soft, cuddly cat

‘You can still tell it’s an old item. It’s just to keep on a shelf in the baby’s room. Take care all, they’re very delicate,’ she said.

Offering a description of how she managed to clean the toy so effectively, she wrote: ‘I used a bristly teasing brush to fluff it out. There’s probably better brushes out there.

‘It still has an old and scraggly feel although it looks soft and fluffy.’

People loved to see the beloved item’s restoration, because it was a popular child’s companion in the 1990s. 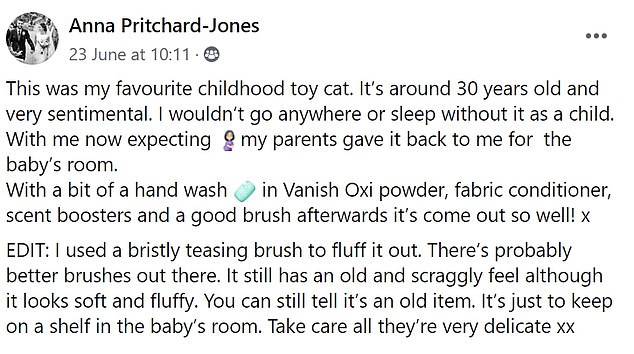 People were impressed with Anna’s good work, and some joked the toy itself looked happier to be clean

Many people said they could not believe it was a same toy.

‘Aww that looks amazing,’ one said.

‘No way is that the same toy!! Looks amazing, such a lovely story too,’ another wrote.

‘Awww it looks happier to be clean,’ noted one.

‘Wow… well done it looks brilliant… I thought you had found a replacement until I read your post. Great job,

‘That’s lovely, I can’t believe how it’s come up,’ one said.