A heavily-pregnant woman has slammed middle-aged Australian men for using the courtesy seats on trains and refusing to move for her.

The woman posted to Reddit on Wednesday to express her outrage after she experienced men rush past her on a Sydney train to grab a courtesy seat.

‘Very obviously pregnant (could not possibly make a mistake) and hot, but beaten for the courtesy seats on trains by two middle aged males in gym gear,’ she wrote.

‘This happens daily. So sick of the selfishness.’

‘I know they could be disabled but the frequency with which this happens is beyond a joke and not every middle aged male can be disabled.’

The woman complained that the men never offer their seat up unless they are shamed into moving for pregnant women or people with disabilities.

‘Young men, old men and pretty much all women are great at offering their seats but middle aged men get your act together,’ she wrote.

The post quickly garnered attention and received more than 200 comments, many of which sympathised for the woman.

‘So ridiculous because as a middle aged man I grew up in a time when travelling on public transport this was something we were taught,’ one user wrote.

‘They should be shamed repeatedly for their sh**ty actions.’

Another said: ‘If you take that seat from someone who needs it, you are uber trash and deserve to have your foot stomped.’

Others shared their own experiences with people who refused to move from the courtesy seats on public transport.

‘My wife is 8mo preggers and complains every day about people on the bus not giving her seats or not making room for her to get off when its her stop. Unreal,’ one user wrote. 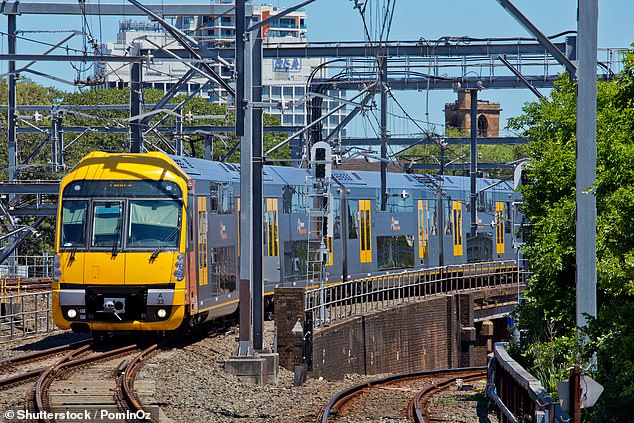 Another user detailed how she experienced the same woman physically push past her every morning as she waited for the train while clearly pregnant.

‘I had a woman on my platform every morning who would shoved past me, a few times nearly knocking me over, to get what was usually the last priority seat in the carriage,’ she commented.

‘More than once I had to get off the train midway to work, to take a break because I couldn’t stand the twenty-five minutes to the city.’

‘Once I passed out, and after that the doctor told me never to stand on the train. Unfortunately, other Sydney commuters made that difficult.’