A woman’s disturbing tweet threatening to abort her baby unless she gets 4,000 retweets has gone viral.

The woman calls herself Saipanting online but her real name is not known.

On Wednesday, she uploaded a selfie which showed off a small baby bump and wrote: ‘4 months pregnant. 4K RTs & I won’t abort it’.

Her post sparked an animated thread with another Twitter user who claimed to be the unborn baby’s father.

Thousands dismissed their posts as an attention-seeking stunt to gain followers, questioning whether she was even pregnant in the first place.

A Florida woman tweeting under the name Saipanting shared this sickening threat to abort her baby unless she got 4,000 retweets last week. The post now has more than 10,000 retweets

Expectant or not, the woman was slammed as ‘despicable’.

Screenshots of her heated exchange with the baby’s apparent father also went viral.

The man, calling himself King Nathan VI and tweeting under the handle Rodriguez The God, responded to her first picture: ‘Instead of letting me know it was my baby you decided to come on Twitter with this bull***?’

‘That’s why I asked you for money but you blocked me so f*** it,’ said the woman.

His response revealed an even more outlandish scenario. 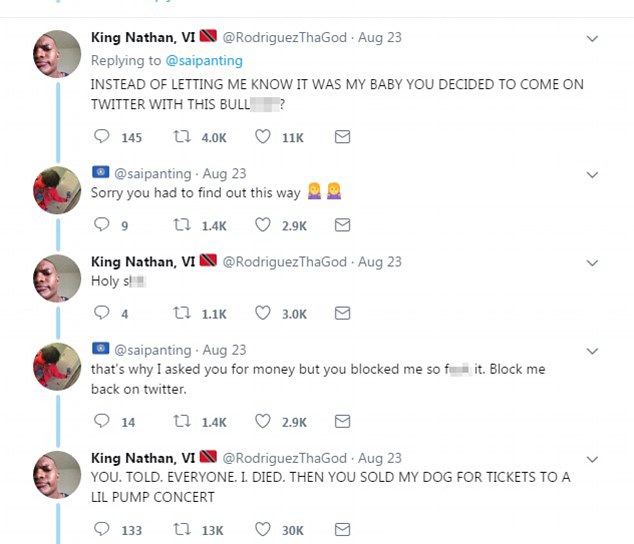 A man, purporting to be the baby’s father, responded angrily and the pair fired back and forth to the amusement of other followers 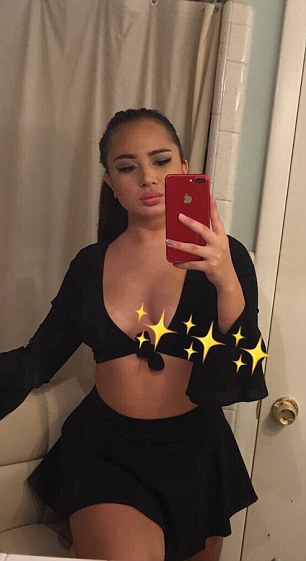 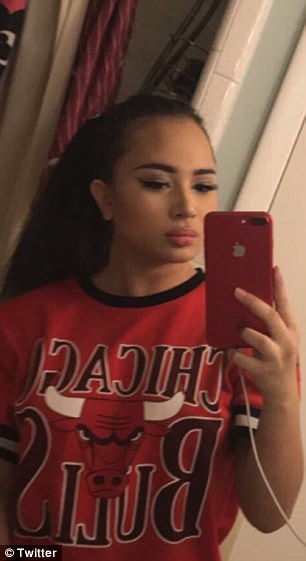 The woman has not been named. Her new Twitter account, set up just two days before she shared the post, includes a string of selfies and foul-mouthed posts

‘You told everyone I died then sold my dog for tickets to a lil pump concert’.

Whether or not their accusations or threats are genuine was discussed by followers.

Many dubious Twitter users found humor in the posts and ridiculed the pair.

Others, some of whom seemed to believe the woman’s threat, failed to see the funny side.

‘Why? Ever think this happened for a reason? You’re already almost halfway there. You can get help and there are adoption agencies,’ said one concerned user.

‘How sad has to be your life to do this?’ asked another while one person fumed: ‘To let retweets dictate if your [sic] going to keep your baby or not is just despicable.’

Many did not believe the thread to be genuine but some concerned Twitter followers appeared to and offered the woman advice. Others labeled her ‘despicable’ and slammed her attention-seeking ways