Pregnant women are at no greater risk of developing severe COVID-19 than other women, according to research.

Some 427 mothers-to-be were admitted to NHS hospitals with the life-threatening coronavirus between March 1 and April 14.

But only one in ten needed treatment in ICU – which is no higher than the figure for women of reproductive age who are not pregnant.

It suggests expectant mothers are no more prone to becoming severely ill, despite them being included on the list of vulnerable people.

Generally women are more likely to catch an infection when they are pregnant due to them having a weaker immune system.

The Oxford University study found pregnant women from BAME backgrounds were more than four times likely to be admitted to hospital with the infection, in-keeping with figures from the general population.

Obesity, having pre-existing health conditions, as well as being over the age of 35 also raised the odds, according to the results of the study.

The research also looked at the babies of the mothers with COVID-19, finding one in four babies were born early.

Five babies died – only three of which the researchers could say the virus definitely did not contribute.

Pregnant women are at no greater risk of severe COVID-19 than other women, a British study has found. Pictured, a pregnant women in Bogota, Colombia

There is no evidence to suggest pregnant women are more likely to catch to the coronavirus than the general population.

However, due to changes to the immune system, it’s been speculated pregnant women may be more vulnerable to severe infection.

The Government has, therefore, told all pregnant women to be extra stringent in practicing social distancing.

The study is believed to be the first large-scale study looking at pregnancy and its links with COVID-19.

Oxford researchers conducted it alongside the Royal College of Obstetricians and Gynaecologists.

ARE PREGNANT WOMEN MORE VULNERABLE TO COVID-19 AND WHAT IS THE RISK TO BABIES?

Generally, there is no evidence that pregnant women become more severely unwell if they develop coronavirus than the general population.

In terms of risk to the baby, the RCOG says: ‘Emerging evidence suggests that transmission from mother to baby during pregnancy or birth (vertical transmission) is probable.’

There has been a report of two cases in which this seems likely, but reassuringly the babies were both discharged from hospital and are well.

The college emphasised that in all reported cases of newborn babies developing coronavirus very soon after birth, the baby was fine.

There is no evidence right now to suggest an increased risk of miscarriage.

RCOG says: ‘Given current evidence, it is considered unlikely that if you have the virus it would cause problems with the baby’s development, and none have been observed currently.’

Patient data for the study was collected from all 194 hospitals in the UK with a consultant-led maternity unit.

Almost 430 pregnant women were admitted to hospital with COVID-19 over six weeks, which the scientists estimated to be around 4.9 per 1,000 pregnant women.

More than half (55 per cent) of pregnant women admitted to hospital with coronavirus were from a BAME background – but only 13 per cent of the UK population identify themselves as BAME.

Around one in ten hospitalised women needed ICU care, which is not significantly different to women who are not pregnant, according to ISARIC data from 7,000 Britons in hospital with COVID-19.

Women were 34 weeks pregnant on average when they were hospitalised, which suggests women in the late stages of pregnancy are more prone to serious COVID-19.

The researchers suggested shielding was more important for women in their third or second trimester compared to the first.

The researchers used a comparison group of 694 women who gave birth two years ago in order to spot any trends.

They found the proportion of women of BAME backgrounds was 4.49 times higher among pregnant COVID-19 hospital patients.

This inequality persisted even when women from London, the West Midlands and the North West were excluded from the analysis, meaning the difference cannot be explained by higher rates of COVID-19 infection in those areas.

It also remained when accounting for age, health conditions and BMI, according to the findings in a pre-print paper today.

Pregnant women over the age of 35 years were 35 per cent more likely to be diagnosed in hospital.

Those who were overweight or obese were twice as likely to be hospitalised with COVID-19 than those who had a BMI under 25.

Pregnant women with pre-existing conditions were also 52 per cent more likely to be admitted to hospital, with high blood pressure the most high-risk.

Smoking rates were lower in pregnant women admitted to hospital for COVID-19 than in the comparison group.

Scientists have started suspecting smokers have some form of protection from the killer infection based on international research.

Overall, five women who were admitted and had a positive test for SARS-CoV-2 died, a case fatality of 1.2 per cent. Thirty women are still in hospital. 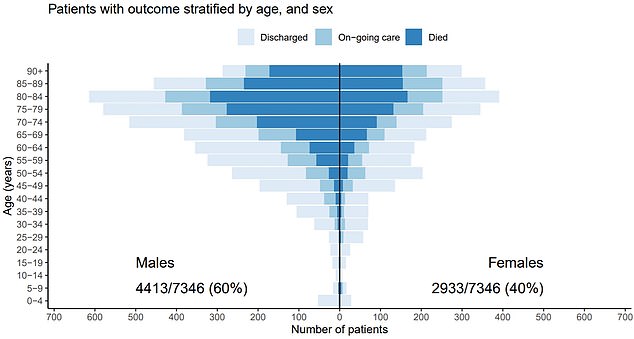 Around one in ten hospitalised women needed ICU care, which is not significantly different to women who are not pregnant, according to ISARIC data from 7,000 Britons in hospital with COVID-19 (pictured) 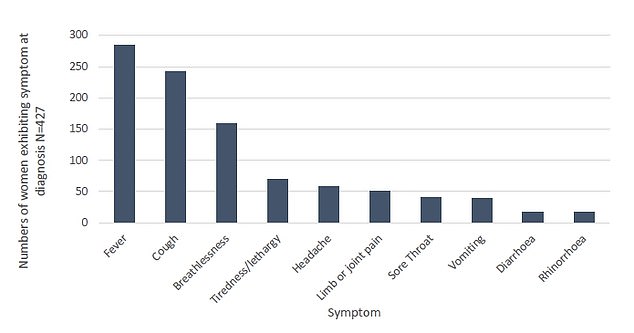 Symptoms of the pregnant women with COVID-19

Commenting on the findings, the research team said it was a ‘concern’ that pregnant women of BAME backgrounds were more vulnerable to the disease.

Generally data has shown that black, Asian and other minority ethnicity people are at higher risk of the disease.

Lead author of the study Professor Marian Knight said: ‘It is concerning that more pregnant women from black and minority ethnic groups are admitted with COVID-19 in pregnancy and this needs urgent investigation.

‘A very small number of pregnant women do become severely ill with COVID-19 and sadly some women have died. Our thoughts must remain with their families.

‘Most pregnant women who were admitted to hospital were more than six months pregnant, which emphasises the importance of continued social distancing measures in the later stages of pregnancy.’

Gill Walton, chief executive of the Royal College of Midwives, added that it was ‘absolutely vital’ women continue to attend antenatal appointments despite the pandemic.

She said: ‘During this current crisis, pregnancies have continued, babies have been born, and, throughout it all, midwives have been at their side, supporting and caring for them.’

For the most part, babies born to mothers with COVID-19 were born after 37 weeks and were healthy.

At the time of analysis, 58 per cent of the mothers either gave birth or lost their baby. The rest are still pregnant.

A quarter of babies were born premature, of which around half were delivered early solely because the mother was struggling to breathe – a symptom of the killer disease.

Across the world emerging reports suggest some babies have been born prematurely to women who were very unwell with coronavirus.

But it is unclear whether coronavirus caused these premature births, or whether it was recommended that the baby was born early for the benefit of the women’s health and to enable her to recover.

The Royal College of Obstetricians and Gynaecologists says emerging evidence suggests the mother can transmit the virus to her baby during pregnancy or birth.

Five per cent of the babies born to COVID-19 mothers also had the virus, half of whom tested positive immediately after birth.

The rest may have picked it up from hospital or relatives – but this was not discussed in the paper.

Five babies died, of which three were ‘definitely unrelated’ to the coronavirus.

The research team were left unsure whether SARS-CoV-2 contributed to the death of the other two babies.