A premature baby born with her intestines outside of her stomach defied slim odds to survive, her parents say.

Her birth defect — a condition called gastroschisis which stops the abdominal wall from forming completely — kills up to 10 per cent of affected babies.

Despite doctors finding it more challenging to treat Autumn because she was born prematurely, they were able to feed her intestines back into her stomach during an intense operation.

Autumn, who is now four months old, was able to return home after a 110-day stint in hospital following the procedure and a string of complications.

Her laboratory assistant mother Holly Striloff, 33, said: ‘It was incredibly tough to see Autumn in that condition when all we wanted to do is hold her.

‘It’s unnatural to not be able to hug your baby or take her home to be with her family, so a lot of it was just getting over the fact that although she was right by us, we couldn’t do anything with her yet.’

She praised the ‘incredible’ team of surgeons and nurses, saying that without them ‘Autumn would not be as happy and healthy as she is today’. 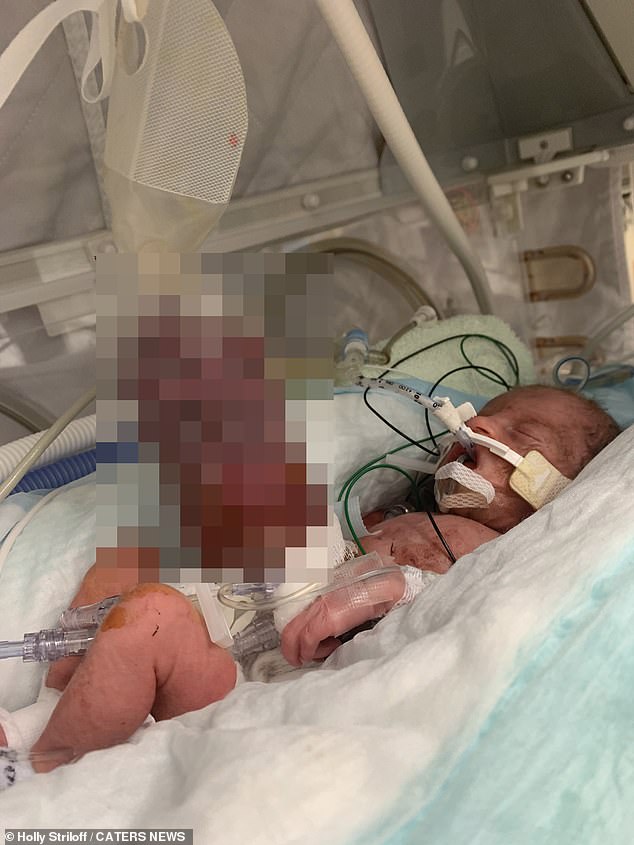 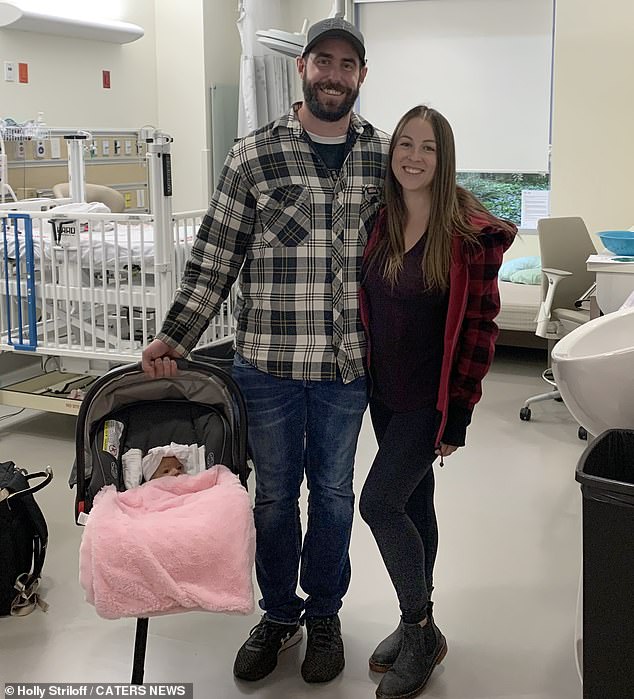 Her lab assistant mother Holly Striloff, 33 (pictured with her partner and Autum’s father Travis Warner, 32,) said she had been ‘dreaming of the day’ she could take Autumn home for the whole of their 110-day stay in hospital. She said: ‘It was 110 days of sleepless nights, mental exhaustion, trauma, defeat and tears. Yet at the same time, it was 110 days of milestones met, love at first sight, excitement and pure joy’

Gastroschisis is a type of abdominal wall defect. It occurs when a child’s abdomen does not develop fully while in the womb.

Early in all pregnancies, the intestine develops inside the umbilical cord and then usually moves inside the abdomen a few weeks later.

In gastroschisis, the abdominal wall does not form completely so the intestines develop outside and are open to the air when the child is born.

Doctors don’t know what causes the condition. But it is commingle increasingly common, aseptically in mothers aged under 20-years-old.

But the incidence rate is still low, with one in 3,000 babies born with the condition each year in the UK.

It is usually diagnosed through routine prenatal ultrasound scans.

Many children with gastroschisis are born prematurely, usually at around 35 weeks.

Most babies with the birth defect are born naturally, but some may need a caesarean.

The outlook for children with gastroschisis is good, with the majority growing up to live normal lives, working and raising a family.

Research shows that children with simple gastroschisis, where no damage occurred to the intestines stay in hospital for about a month and start to feed normally within a few weeks of treatment.

Ms Striloff and her partner Travis Warner, 32, found out Autumn had the condition in April, when she was 18 weeks pregnant.

She said: ‘I was shocked because it was not something I had ever really heard of before.

‘At the time, it was incredibly overwhelming because we were just concerned for her safety.’

Ms Striloff was admitted to hospital on July 2 and gave birth at 31 weeks to Autumn — whose low birthweight made her gastroschisis even more difficult to treat.

The condition occurs when muscles of the abdominal wall do not form properly, leaving a hole near the belly button for vital organs to find their way outside of the body.

It is still relatively unknown what causes the condition but the survival rate is more than 90 per cent.

Ms Striloff said: ‘There are a lot of complications that come with the condition, but she was also not growing and was in the third percentile.

‘It has been a chaotic and stressful journey and meant that neither of us really rested much with everything happening.’

There are two surgery treatments for the condition.

One option — called full closure — is performed immediately after birth and involves feeding the intestines back into the body and sewing up the hole.

In the second option, called the silo procedure, doctors place a bag over the baby’s intestines and hang them on a bar, which gradually feeds the intestines into the body over a few days.

Autumn’s tiny size meant that the silo procedure was preferred by the medical team at Women’s and Children’s Hospital, in Vancouver, British Columbia, and her procedure began on July 5 and lasted over 12 days.

The procedure is trickier and makes it more likely the intestines will be damaged, as they are outside the baby for longer.

Ms Striloff said: ‘It requires very well trained hands to perform the necessary surgeries, but we were put slightly at ease by the assurances made by the team that there was a way to help her.

‘I actually found out more about the condition myself through various support groups on Facebook.’ 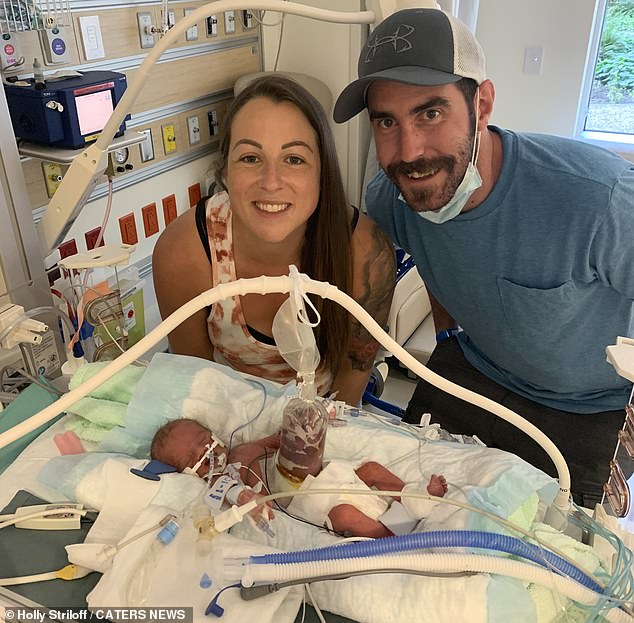 Ms Striloff said: ‘It was incredibly tough to see Autumn in that condition when all we wanted to do is hold her’ 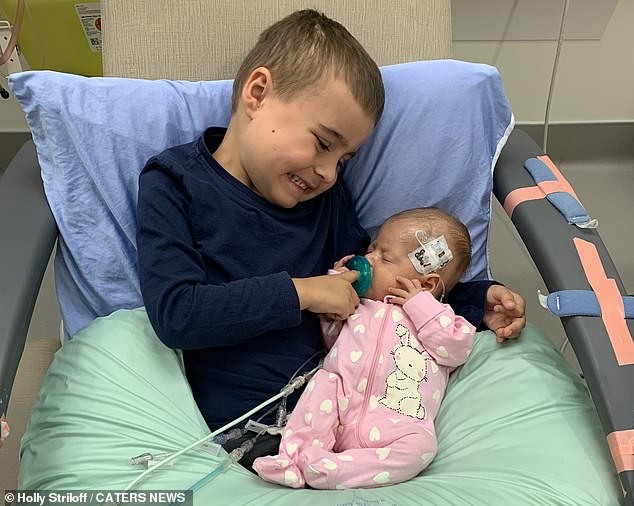 Ms Striloff and Mr Warner, who are already parents to their son Kohen, five, (pictured with Autum) and found great support online by reaching out to families who have also been affected by gastroschisis

Autumn also suffered a multitude of different complications due to the condition, such as a 4cm obstruction in her small intestine which required a second surgery, four blood transfusions and catheters placed into her body to administer medication.

Her parents spent 110 days in hospital, before being able to leave on October 23.

Ms Striloff said: ‘I had been dreaming of the day for the whole time we were there, and it will now always be a really special day for us.

‘It was 110 days of sleepless nights, mental exhaustion, trauma, defeat and tears.

‘Yet at the same time, it was 110 days of milestones met, love at first sight, excitement and pure joy.

‘She now weighs 8lbs 4oz and is happy and healthy thanks to the incredible care we received.’