Premature baby to be buried at feet of cancer-stricken mom

Mother-of-five Carrie DeKlyen, 37, was diagnosed with stage four brain cancer in April, and days later found out she was pregnant.

It meant she had to forego chemotherapy to save the child.

At the time, her husband of 17 years Nick, 39, said that was the most difficult and conflicting experience he’d ever confronted.

Now, just five months later, he is preparing to bury both Carrie and their two-week-old daughter Life, after both died following an emergency cesarean section that failed to save them from the aggressive disease, as Carrie lay in a stroke-induced coma.

Carrie died on September 9, three days after the birth, having been unconscious for five weeks. Life died at 10.30pm on Wednesday.

Today, Nick described the agonizing moment Life passed away and he screamed up at God: ‘HOW CAN YOU TAKE BOTH OF THEM?’

The widowed father of Wyoming, Michigan, now faces the further agony of explaining everything to his children, aged two to 18.

Agony: Nick DeKlyen, 39, is preparing to bury his sixth child alongside his wife of 17 years, Carrie, who died earlier this month. Carrie denied chemotherapy to save the child 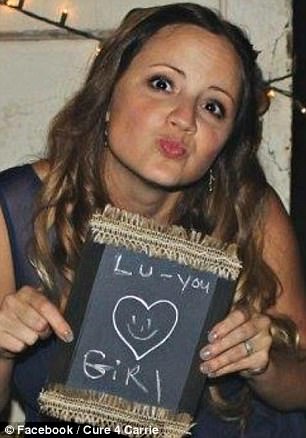 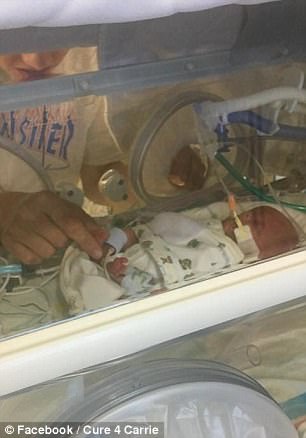 Carrie DeKlyen, 37, found out she was pregnant with her sixth child, Life, after doctors found a terminal brain tumor that was causing her extreme headaches. She died September 9, just a few days after giving birth to her daughter, Life

Life’s aunt, Sonya DeKlyen Nelson, posted on Facebook on Thursday that Life had died. The baby had been struggling off and on with her oxygen levels 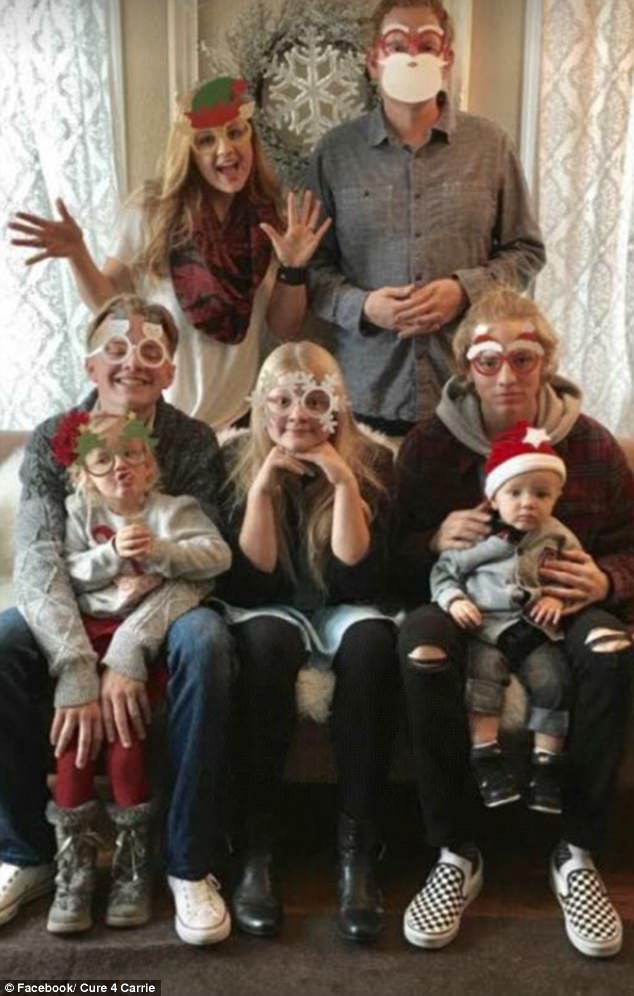 Carrie and her husband (back row) have six children together. Their youngest daughter Life Lynn will remain in the hospital for four to five months

Carrie was diagnosed with glioblastoma multiforme, a lethal brain cancer, in April and found out two weeks later that she was pregnant.

She decided to forgo chemotherapy in order to keep her child and give her a chance of surviving.

The doctors tried to get Carrie to 27 weeks pregnant before having Life, but the stress of the pregnancy was too much on the mother.

They decided on September 6 to perform the surgery in a desperate attempt to save both the baby and Carrie.

Doctors thought that Life would have a chance of survival, but her low oxygen levels, abnormal blood pressure and rising fluid in her brain were too much for the premature baby.

She died on Wednesday, just two weeks after she was born.

Carrie’s breathing and feeding tubes were removed on Thursday after the birth and her husband said she was hours away from dying.

‘My wife loves the Lord and she loves her children more than anything,’ Nick Deklyen, husband said the Friday before Carrie died.

‘It’s painful,’ he added. ‘But this is what she wanted. She wanted to protect this child.’

Carrie discovered she was pregnant in April, days after she was diagnosed with a terminal brain tumor, the same one John McCain has.

On July 28, at just 19 weeks, Carrie suffered a traumatic stroke. She was unconscious on and off a ventilator ever since.

Doctors at the University of Michigan Hospital in Ann Arbor were trying to wait till end of September for Life to be delivered at 28 weeks, but they decided on Wednesday that they could not wait any longer, as the baby had been moving less and less and they were worried she would die in Carrie’s womb.

Surgeons warned the family that Carrie could die on the table during the delivery because she still relied on a machine to help her breathe and the cancer had worn down her body.

Her baby survived the delivery, weighing 1lb and 4oz. But Carrie’s body was no longer capable of handling the damage from the cancer. 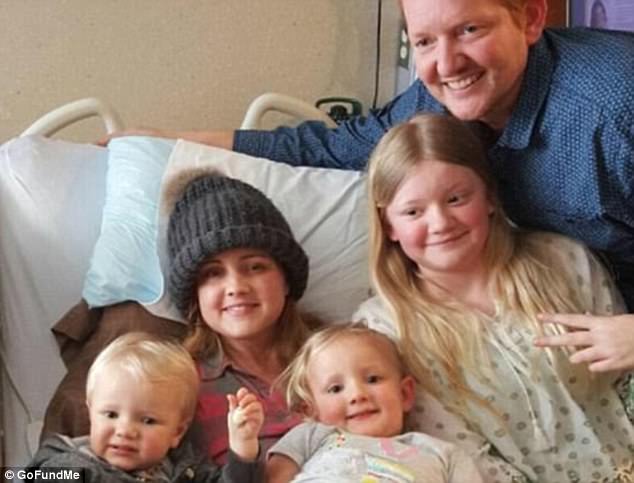 Before her stroke: Carrie was diagnosed with terminal brain cancer in April. Pictured: Carrie in the hospital with Jez, Laila, Nevaeh and her husband Nick

Carrie was diagnosed with glioblastoma multiforme diagnosis, a terminal brain tumor that was originally the size of a clementine.

At the time, she and her husband Nick, 39, didn’t know she was pregnant.

When she found out she decided to forgo chemotherapy to keep the child. Although it could have extended her life and shrunk the tumor, it would have killed the baby.

Doctors have yet to test the risks of chemotherapy on a baby during the first trimester.

Those first months are crucial for a baby because most of the internal organs are developing and the drugs could hinder that.

Chemotherapy is also more likely to cause a miscarriage during the first trimester.

So Carrie opted for radiation treatment in hopes it would keep herself alive long enough to have her child.

She also had two surgeries, one to try to remove the tumor and the other to drain the liquid, but both have no helped her situation.

People with this aggressive form of brain cancer only have a 10 percent chance of surviving five years after diagnosis.

The mother, from Wyoming, Michigan, had been unresponsive at the hospital since the end of July.

Doctors had to put her into a medically induced coma after she suffered a dangerous stroke from the tumor that continues to grow in her brain.

The stroke left her off and on a ventilator for over a month as she fought to breathe on her own without exerting too much energy on her body.

Towards the beginning of her coma, she was responsive and would occasionally open her eyes or move her limbs.

Doctors were hopeful that she would maybe even wake up from the coma once the swelling in her brain went down. 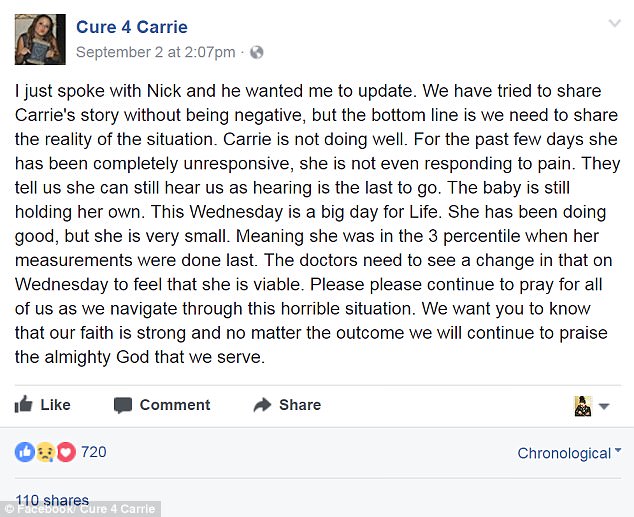 Sonya, Carrie’s sister-in-law, has been keeping people updated on Carrie’s progress through a Facebook account.  Two weeks ago, doctors told the family they needed to deliver Life because of Carrie’s current condition

But the tumor continued to grow and with that growth comes the need to constantly drain her skull from excess fluid.

Doctors tested Life’s size and health at the end of August because they were worried about her viability outside of the womb.

She measured in the three percentile range for size at 24 weeks and five days old.

Her mobility grew less and less over the weeks, which prompted the doctors to decide to deliver her tonight for fear that she would die in Carrie’s womb if they didn’t.

At 24 weeks, Life was considered in the extremely preterm category.

She had also developed a small amount of fluid in her brain.

This fluid can cause minor symptoms for Life or severe brain damage, and continued to increase the two weeks she was alive.

On average, 63 percent of babies born at 24 weeks survive in the United States, and Life is now another baby who so far is doing OK outside the womb.

The normal gestation period for an infant is 40 weeks old.

Some problems that doctors were worried about when they deliver a baby this young is the high risk of developing a neurological disability.

These disabilities can include something as severe as an inability to walk or control their muscles or something mild such as having a learning disability.

Nick said that they originally expected her to remain in the hospital for four to five months to get her larger and more healthy.

Life was briefly gaining weight and able to breath occasionally on her own.

But she wasn’t able to remain stable for long. Her oxygen levels plummeted and the fluid in her brain rose concerning doctors.

Today she died just two weeks after she was born.

Carrie’s husband Nick has been staying at the Ronald McDonald House in Ann Arbor, Michigan, since Carrie went unconscious so he can be close to his wife and baby while they fight for their lives.

She also created a GoFundMe page to help raise awareness of what the family is going through to help pay for Carrie and the baby’s care.

So far, the page has made close to $160,000 with more than three thousand shares on Facebook.

What is glioblastoma? The most aggressive tumor that forms from glial cells in the brain

Glioblastoma is the most aggressive tumor that can form in the brain and was also found in John McCain last month. Patients have a 10 percent chance of surviving five years after their diagnosis.

It is made up of a mass of cells growing in the brain, and in most cases patients have no family history of the disease, according to the American Cancer Society.

The tumor won’t spread to other organs, however, once it is diagnosed, it is nearly impossible to target.

Because the tumor likely already spread deep into the brain by the time it is diagnosed, the cancerous tissue is incredibly difficult to remove.

It is mostly found in men between the ages of 50 and 60 with previous history of cancer, so it is incredibly rare that Carrie got the cancer.

Symptoms can include blurred vision, severe headaches, trouble with memory and dizziness.

In order to diagnose the disease, doctors will do a CAT scan or MRI, and then biopsy the tumor and run pathology tests.

Chemotherapy is one option to treat glioblastomas, though it is relatively ineffective because of the blood wall surrounding the brain that protects it. That barrier makes it difficult for the drugs to reach the tumor.

Radiation is another option the Senator’s doctors will employ, however because of the chance of harming other organs or brain tissue, they will only be able to use a low dose.

The low dose might shrink the cancer, but will not kill the entire tumor.

Carrie opted to do radiation since she could no longer do chemotherapy since it would terminate the pregnancy.

Although the radiation might have shrunk the tumor some, the doctors say Carrie’s tumor continues to grow.

The tumor makes it impossible to remove every microscopic growth. Therefore, it will continue to grow.