Premature baby weighing 1lb is the smallest ever to survive an incomplete esophagus, doctors say

Baby born at 23 weeks weighing just ONE POUND and with an esophagus that did not connect the mouth and stomach is ‘smallest ever’ to survive the condition, doctors say

A premature baby born with an incomplete esophagus is the smallest ever to survive with the condition.

Harper Jacobo and her sister Gabriella weighed just 1lb (0.45kg) when they were born at 23 weeks in Alliance, Nebraska in February 2021.

After birth. the twins were rushed 250 miles to a specialist Rocky Mountain Hospital for Children in Denver, Colorado, where doctors found the tube between Harper’s mouth and stomach had failed to connect.

Doctors carried out surgery before using magnets to successfully bring the two parts of the esophagus together.

Dr Steven Rothenberg, chief of pediatric surgery at the hospital, said Harper was the ‘smallest baby ever to be born with this [condition] to survive’.

Pictured above is Harper (left) and Gabriella (right) Jacobo about a year after they were born, at home in Alliance, Nebraska 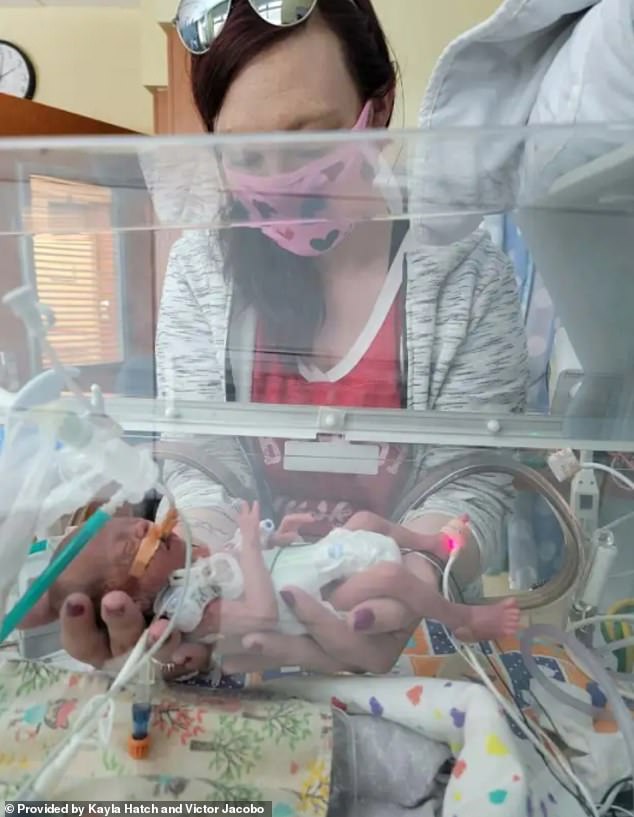 The pair weighed just 1lb (0.45kg) when they were born. Pictured above is mother Kayla Hatch holding one of her daughters at a hospital 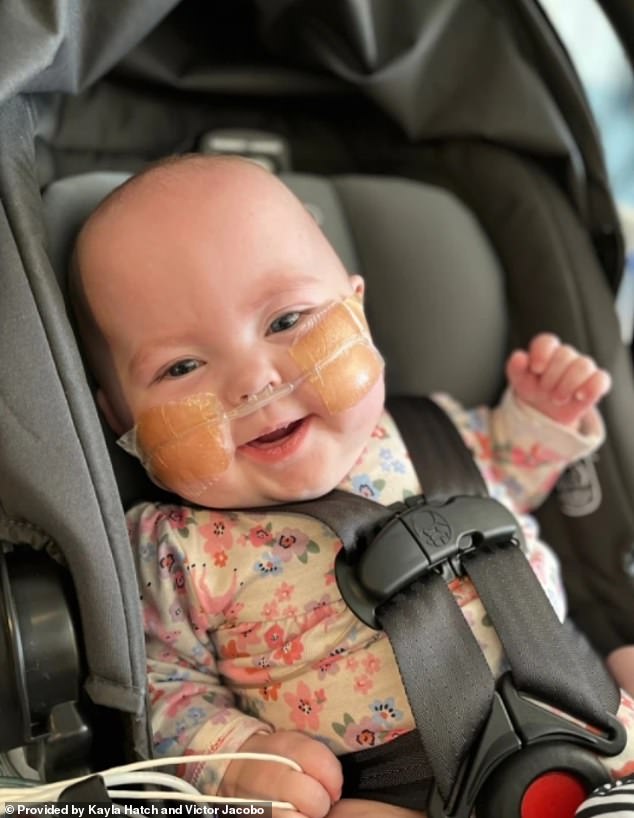 Doctors at specialist Rocky Mountain Hospital for Children in Denver, Colorado, found that the tube between Harper’s mouth and stomach had failed to connect. They carried out surgery and used magnets to join it together so that she could eat and breathe normally 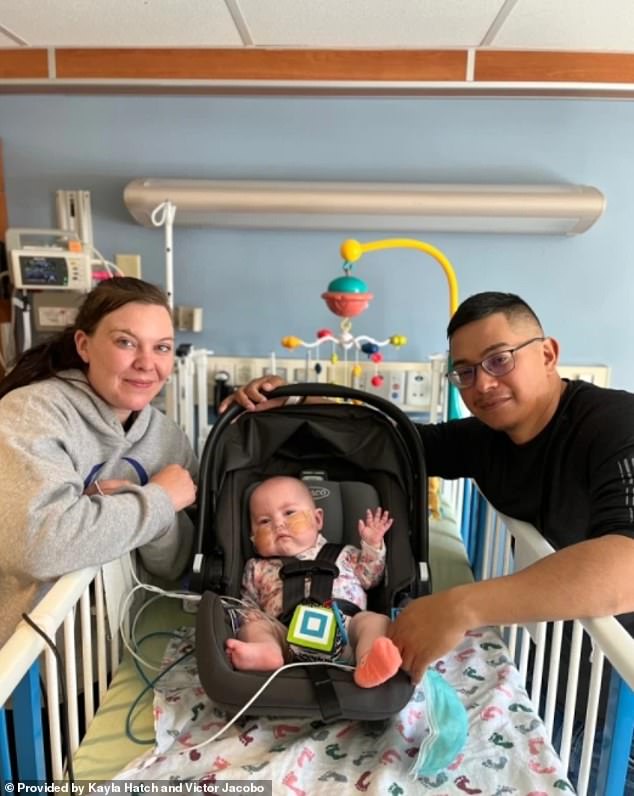 Parents Kayla Hatch and Victor Jacobo pictured with Harper at the specialist hospital in Denver, Colorado, where she received surgery

The condition — known as esophageal atresia — occurs when the upper and lower part of the esophagus fail to connect.

It occurs in about one in 4,100 babies born in the U.S., although most babies survive the condition.

It is not clear what causes it, but scientists have suggested the condition could be down to abnormalities in the genes, pointing out that many sufferers also have problems with their digestive system, heart and kidneys.

What is esophageal atresia?

This condition happens when the tube connecting the mouth and the stomach fails to connect.

It leaves babies unable to pass food to their digestive system, and sometimes struggling to breathe.

It is not clear what triggers the condition, but scientists have suggested it may be due to genetic abnormalities.

They point out many children with the condition also have other issues such as digestive problems.

Surgery is needed to connect the tube to enable the baby to eat properly.

Multiple operations may be needed if the tube later becomes too narrow for food to pass through it, or if the muscles do not work well.

About one in 4,100 babies born in the US are affected by the condition every year.

Harper and her twin Gabriella were both born in February last year at about the earliest age from which babies have been known to survive outside the womb.

After transferring Harper to the specialist hospital, doctors there waited another four months before carrying out surgery.

They did not say how Harper was fed during this time.

After the initial surgery, doctors used a magnetic procedure to bring the esophagus together.

Harper spent the first year of her life in hospital receiving treatment before finally being discharged.

Gabriella was not born with the birth defect, and was discharged earlier into her family’s care.

Fighting back tears, he added: ‘We just can’t thank everyone enough for being there and helping us through these trying times.

‘For the rest of my life, I’m going to be thanking them.’

Babies have been known to survive outside the womb from 23 weeks of age, although they need high levels of medical care.

Esophageal Atresia is usually detected within the first few days of life, and can also be diagnosed in the womb from 23 weeks of age.

Almost all babies diagnosed with the condition survive, according to studies.