Collingwood defender and former Western Bulldogs premiership winner Jordan Roughead shocked his teammates on Friday morning, announcing he was retiring immediately at the age of 31.

The veteran played 201 games, 138 for the Bulldogs and 63 for Collingwood, and battled injuries throughout a career where he was lauded for his toughness and bravery. He has played just one game this season.

In recent times he has faced shoulder issues and finger surgery, and his retirement also opens up another spot on the list for the Magpies ahead of the midseason draft, though it is understood that was not a factor in Roughead’s decision.

In a video posted on Collingwood’s website, he told his teammates that he had no choice but to retire due to the toll footy has taken on his body.

‘Coming into this season I knew that it was likely to be my last. I’ve had an ongoing shoulder issue for the last few years that unfortunately haven’t been getting any better.

‘Advice from surgeons and specialists and our medical team over the last six weeks has been that I should retire from all levels of football to avoid the need for an immediate-term shoulder replacement.

‘I’ve taken that advice and that’s why I’m up here today, to announce my retirement.

‘If you have been paying attention to Wadey’s (high performance manager Jarrod Wade) medical reports, I’m actually the first player to retire from a finger injury…so thanks, Wadey,’ he laughed. 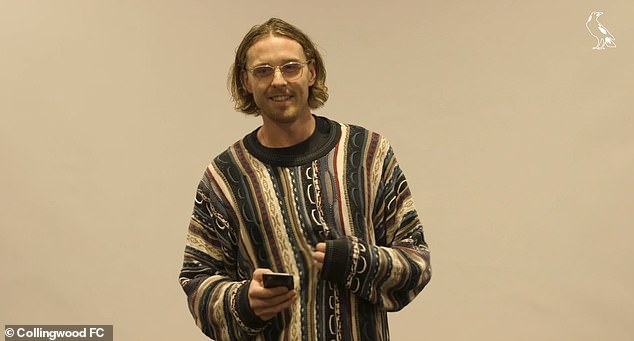 Roughead’s retirement announcement was laced with humour, sending his teammates into fits of laughter on several occasions

Before he moved to moved to Collingwood in the 2018 trading period, Roughead played for the Bulldogs after being the 31st pick in the 2008 draft, and was a key member of their 2016 premiership team.

He played a key role in that grand final against the Swans, taking a crucial mark with the game on the line, and also carried a serious eye injury into the game.

Roughead spent his career alternating between key defender and ruck posts, and according to statistician Sir Swamp holds the unfortunate record of most home and away games without a Brownlow vote. He sits on 193 ahead of former Sydney defender Nick Smith on 191.

He was a very popular team member at both clubs, and said he was incredibly grateful to the game for what it allowed him to achieve in life.

‘Playing footy gave me the ability to contribute to something that was greater than just me and what I was ever going to be able to accomplish on my own. I have never been the fittest, strongest, or best kick. I found a way to squeeze all the juice out of my lemon and be a part of something bigger than myself,’ he said. 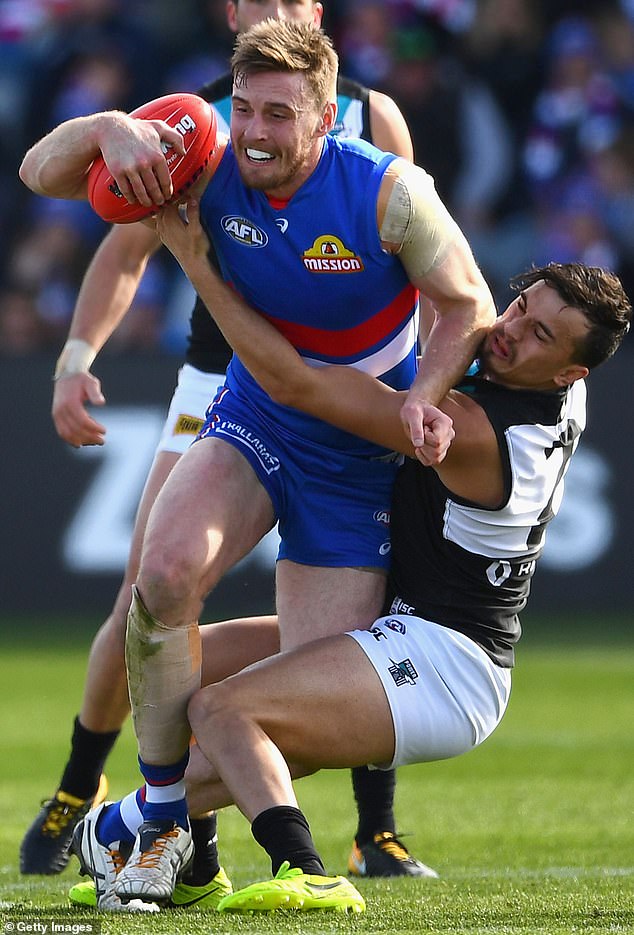 He played 138 games for the Bulldogs, including the 2016 grand final

Not only was Roughead a warrior on the field, he was highly respected off it. He was nominated twice for the Jim Stynes Community Leadership Award, was an assistant coach at AFLW level and an outspoken supporter of the LGBTIQA+ community, climate change, youth homelessness and women’s sport in general.

He was also vocal with ensuring the club tackled the racism issues that arose from the ‘Do Better’ report.

As popular with the fans as he was with his clubs, many Bulldogs and Magpie fans took to Twitter on Friday morning to thank him for his career. 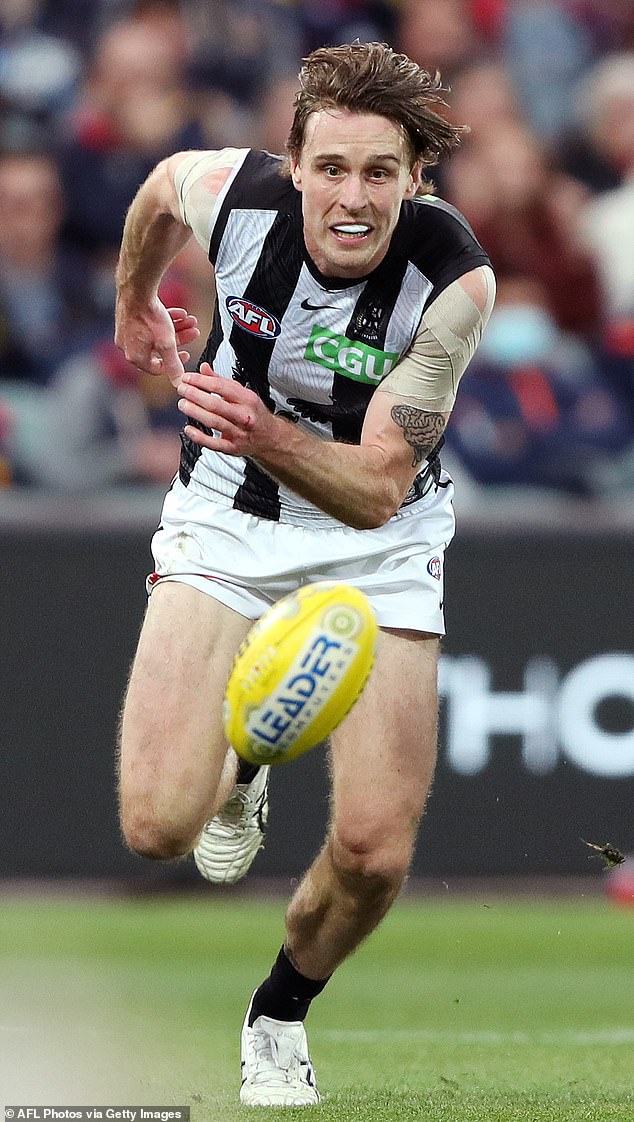 Roughead was tough as nails as a defender and ruckman

‘Absolutely devastated to hear the news of Jordan Roughead’s retirement. Such a brilliant person and footballer for two wonderful football clubs. Wishing Roughie all the best in what’s to come, and no doubt that will be in development coaching and media. Thanks, Roughie!’ one fan wrote.

‘Happy retirement to Jordan Roughead. A man who was prepared to permanently lose his sight in one eye, just to play in our ‘16 GF. And the guy who took THAT mark on the same day. It was one gutsy play that quashed a lifetime of “oh no, not again” inner dialogue. Thank you, Roughy,’ wrote a Bulldogs fan. 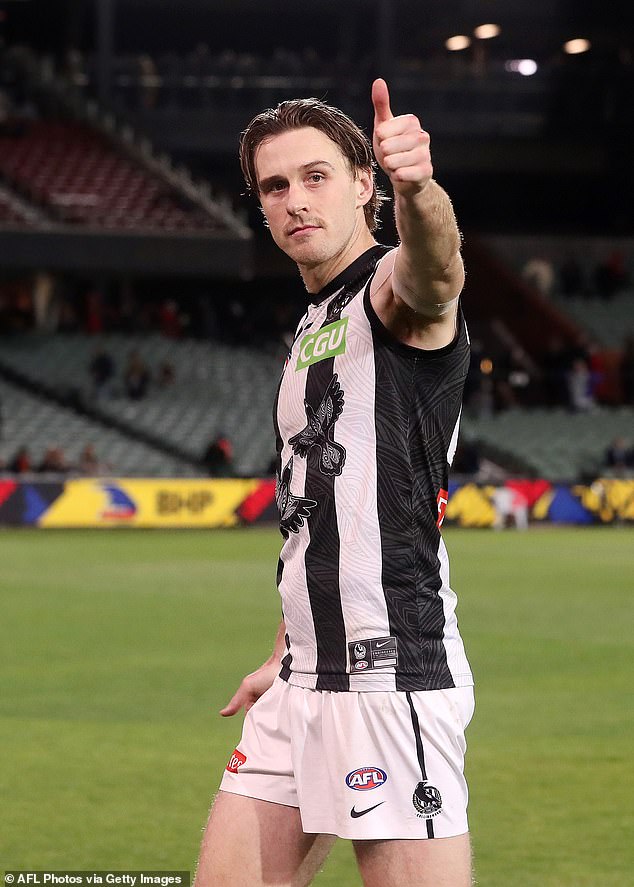 Roughead announced that he and Bridget are expecting their first child

With wife Bridget watching on with tears in her eyes, Roughead concluded his retirement address by announcing the next steps in his life.

‘I’m going to finish on an incredibly happy note. They say when one door closes another opens and I’m going to be a rookie again…my career as a dad is about to start! So it’s happy days ahead.’

Thanks for everything, Roughy.