She has stood, talking to camera, while horrors played out behind her. Relatives pulling their dead loved ones from the rubble of a devastating earthquake. Bodies piled up from an all-engulfing tsunami that claimed 225,000 souls. And she’s had to pose questions to those going through the most traumatic day of their lives.

Sian Williams has had a front-row seat at some of the most tragic events of the recent decades, from the 1989 Hillsborough football stadium tragedy to the Asian tsunami of 2004 and the Pakistan earthquake of 2005. These experiences left an indelible mark on her, and set in motion her second career, as a psychologist helping others through trauma.

Now she’s putting her skills and experience in both areas to use at the helm of the major relaunch of Channel 5’s flagship 5 News, which brings viewers into the stories and highlights mental health and wellbeing.

The hour-long show, which runs Monday to Friday, not only covers the biggest issues of the day, but also features a weekly slot for Sian to highlight key moments that changed people’s lives, during which the audience will be able to directly contact her and co-host Claudia-Liza Vanderpuije on WhatsApp with their thoughts and questions.

‘It’s going to be really interactive and I hope some of the stories that will turn up will be driven by the audience. Because I’ve been working in mental health, you often hear things and think, “That would make a great item. And nobody’s talking about it,”’ says Sian. ‘So we can now shine a spotlight on these issues.’

Presenters Sian Williams and Claudia-Liza Vanderpuije. Sian Williams has had a front-row seat at some of the most tragic events of the recent decades, from the 1989 Hillsborough football stadium tragedy to the Asian tsunami of 2004 and the Pakistan earthquake of 2005

As a journalist Sian, 56, is a familiar face. Not only has she been reading bulletins on BBC1 for more than two decades, also co-hosting BBC Breakfast from 2001 until 2012, but since January 2016 she’s been the main presenter of the half-hour version of 5 News, which the new show has replaced.

Her work in mental health may be less well known, but it’s something she has devoted years to. She first trained as a trauma assessor for the BBC in 2005, after reporting on a series of dramatic world events had left her shattered. ‘At the time I was doing a lot of trauma reporting, such as the Pakistan earthquake and the Asian tsunami the year before that, where you’re parachuted in to an event then you go away again.

‘When I re-turned home to the warmth of my family, images of devastation and decay, the cries of distress and the sickly smell of disease and death lingered,’ she has said.

Five years later she began to assess the direction of her career after her mother’s death from bowel cancer and the birth of her youngest child. When BBC Breakfast moved to Salford in 2012, she resigned and embarked on an MSc in Psychology. The knowledge she gained helped her through her own breast cancer diagnosis in 2014 (she underwent a double mastectomy). Recently, she’s completed a three-year Professional Doctorate in Counselling Psychology.

‘It’s been such a passion for so long. My mum was a brilliant nurse. Most of our family have worked in the NHS. I wish my mum was alive to see me as a Doctor in Counselling Psychology. I hope she’d be proud.’

Sian, who has five children – a stepdaughter, two children from her first marriage to advertising executive Neale Hunt, and two from her second marriage to Paul Woolwich, who works for an environmental charity – says her counselling patients almost never recognise her because she looks the antithesis of a TV presenter.

‘My hair is tied back, I’ll wear my glasses. I won’t be wearing make-up. Therapy is about being together with someone where they feel comfortable to go with you to difficult places. Nothing should distract from that.’ 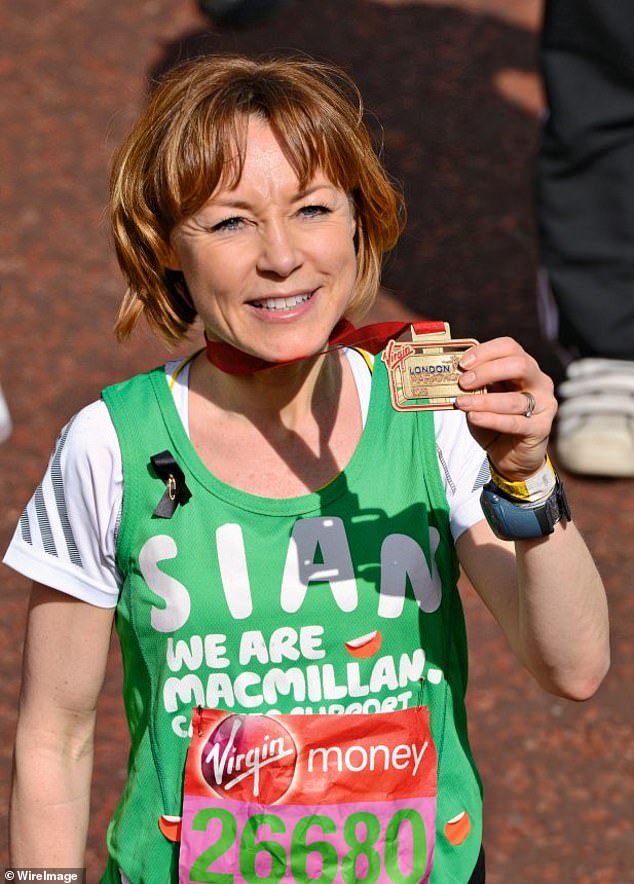 Sian Williams takes part in the Virgin London Marathon on April 21, 2013 in London

It’s incredible that Sian has managed to juggle both careers and her family throughout. ‘There’s never been any kind of resentment. There’s never been any, “Oh no, why are you coming to bed after midnight again?”, and my husband was used to me getting up early for BBC Breakfast. We knew that this full-time doctorate – and a job and family – was going to be a challenge for a few years and I’m enormously grateful that the whole family has been behind me.

‘I guess there might have been an expectation from the university that I wouldn’t be working while I was doing it. But I thought, if I could manage it, I didn’t want to walk away from a job that’s been so important to me for the past 35 years.’

Joining her on the revamped news programme is her co-host Claudia-Liza, known as CL. The 42-year-old mother-of-two has been presenting 5 News Tonight since 2018, but that show, which used to air at 6.30pm, has made way for the new bumper programme.

CL was proud to have been the first black lead-anchor on 5 News Tonight and is delighted to be breaking ground again with the innovative new format. ‘With the WhatsApp connectivity, we’re trying to make the show more accessible so we’re talking to people like we’re having a conversation live, and I’m really excited about that,’ she says.

‘Also our team is largely female-led – behind the scenes are a female director, female editor and many female producers.’

CL credits her mother for inspiring her interest in TV and launching a career which has seen her present on Sky News and Channel 5’s topical daily debate show Jeremy Vine. 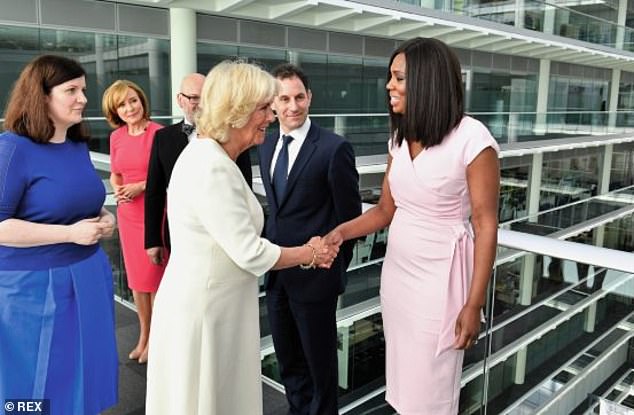 A royal meeting: Claudia-Liza greeting the Duchess of Cornwall in May 2018 in London

‘I’m a huge TV fan and it started in my childhood when it was escapism. I didn’t have much of a social life as my Ghanaian mother wouldn’t let me hang around with the other children in the west London council estate where I grew up. So it was me at home with my two little sisters. I’d be the first person to get up in the morning and get them ready,’ she recalls.

‘I was brought up by a single mum and it was really tough, as she was quite ill for much of my childhood. She had an issue with her ears that led to balance problems, so sadly she was bedridden much of the time.

‘It felt like I was raising my younger sisters myself. After taking them to school I’d then have to deal with myself and get my homework done – and then try to ace it.’

She certainly did that and is now an advocate for social mobility who mentors young people, offering advice on university applications and entering broadcast journalism.

‘It was really tough being poor sometimes. I think that’s why I worked so hard. I never want to go through that again. So when I was able to work when I hit 16, I didn’t stop.’

Just like Sian. Together they make for a dynamic television duo.

5 News is on weeknights, 5pm-6pm, produced by ITN.