President Bolsonaro tells Emmanuel Macron that he has to ‘withdraw insults’

Brazil’s President Jair Bolsonaro has said he will only accept an offer of international aid for fighting fires in the Amazon if French leader Emmanuel Macron ‘withdraws insults’ made against him.

Mr Bolsonaro said his French counterpart had called him a liar, and accused him of questioning Brazil’s sovereignty amid tensions over devastating fires sweeping the Amazon region.

It is the latest deterioration in a running feud between Bolsonaro and Macron, with recent jibes over the Notre Dame inferno and Macron’s wife, Brigitte.

‘To talk or accept anything from France, with the best possible intentions, he (Macron) has to withdraw these words, and from there we can talk,’ Bolsonaro told reporters today. 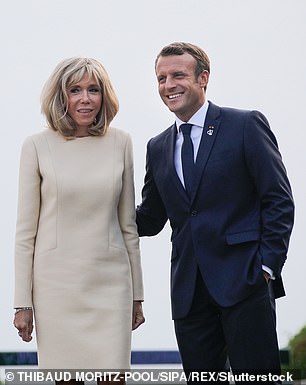 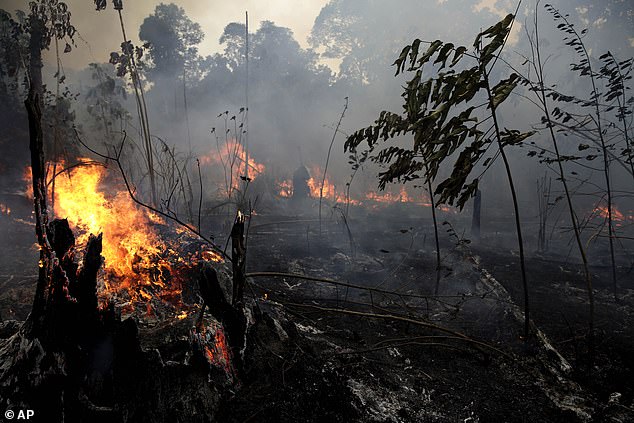 More than 80,000 forest fires have broken out in Brazil since the beginning of the year. Pictured: A fire ruins trees along the road to Jacunda National Forest

Macron, who has questioned Bolsonaro’s trustworthiness and commitment to protecting biodiversity, has shrugged off the snub from the Brazilian president.

The French leader said in a speech Tuesday that Bolsonaro’s interpretation is a ‘mistake’.

He said the money isn’t just aimed at Brazil but at nine countries in the Amazon region, including Colombia and Bolivia. France too considers itself an Amazon country via its overseas region of French Guiana.

Although more than 80,000 forest fires have broken out in Brazil since the beginning of the year, the majority in the Amazon, Bolsonaro has accused Macron of sensationalism.

Macron had earlier called the Brazilian leader ‘extraordinarily rude’ after he endorsed a derogatory Facebook post about Brigitte Macron’s appearance. 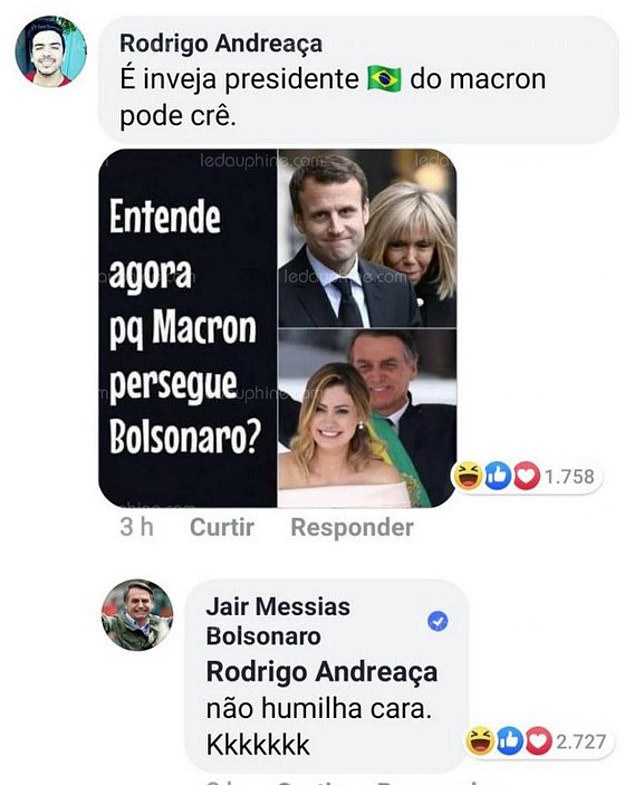 It comes after a Bolsonaro supporter posted this meme mocking Brigitte Macron, 66, and comparing her unfavourably with Brazil’s first lady 37-year-old Michelle Bolsonaro. It says: ‘Now you understand why Macron is persecuting Bolsonaro?’ The far-right Brazilian leader replied: ‘Do not humiliate the guy, ha ha,’ referring to Mr Macron 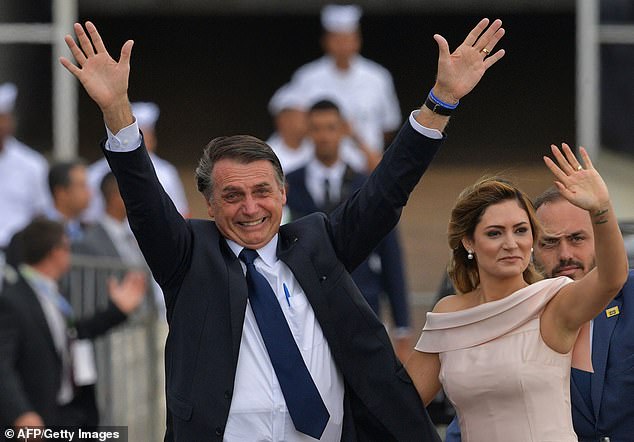 Asked whether the response came from Bolsonaro (pictured with wife Michelle) himself, a spokesman for Brazil’s presidential palace refused to comment

As one person pointed out that ‘Netflix paid $100million to stream Friends’, internet users were left unimpressed with the amount offered in comparison to the South American rainforests. 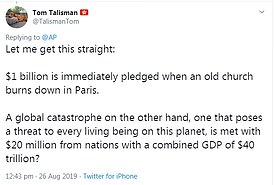 One wrote: ‘Within hours of Notre Dame catching fire, France and prominent European families pledged $1 billion to rebuild it. But the Amazon only gets $20 million?’

‘Let me get this straight: $1 billion is immediately pledged when an old church burns down in Paris,’ another said: ‘A global catastrophe on the other hand, one that poses a threat to every living being on this planet, is met with $20 million from nations with a combined GDP of $40 trillion?’

The G7 (or Group of Seven) is made up of the world’s seven largest advanced economies: France, Germany, Italy, Canada, Japan, the United Kingdom and the United States.

It had the tagline: ‘Now you understand why Macron is persecuting Bolsonaro?’

When asked about the post at the G7 summit, Macron replied: ‘He said very disrespectful things about my wife, I have great respect for the Brazilian people and can only hope they soon have a president who is up to the job…

‘What can I say? It’s sad. It’s sad for him firstly, and for Brazilians…

‘I think Brazilian women will probably be ashamed to read that from their president.’

Bolsonaro, in turn, said Macron’s ‘ludicrous and unnecessary attacks on the Amazon’ were unacceptable and accused him of treating the region ‘as if we were a colony.’

He tweeted: ‘We cannot accept that a president, Macron, unleashes unreasonable and unreasonable attacks on the Amazon, nor disguises his intentions behind the idea of ​​an ‘alliance’ of the G-7 countries to ‘save’ the Amazon, as if we were a colony or a no man’s land.

‘Other heads of state sympathized with Brazil, after all respect for the sovereignty of any country is the least that can be expected in a civilized world.’

Further stinging barbs were fired across the Atlantic later in the day when Bolsonaro’s chief of staff rebuked the French president for his failure to prevent the Notre Dame fire in April.

‘We appreciate (the offer), but maybe those resources are more relevant to reforest Europe,’ Onyx Lorenzoni, chief of staff to President Jair Bolsonaro, told the G1 news website.

‘Macron cannot even avoid a foreseeable fire in a church that is a world heritage site,’ he added, referring to the fire in April that devastated the Notre-Dame cathedral. ‘What does he intend to teach our country?’

The French president has threatened to block a huge new trade deal between the European Union and Latin America unless his Brazilian counterpart takes serious steps to protect the fast-shrinking forest from logging and mining.

Meanwhile, weak rainfall is unlikely to extinguish a record number of fires raging in Brazil’s Amazon anytime soon, with pockets of precipitation through September 10 expected to bring only isolated relief, according to weather data and two experts. 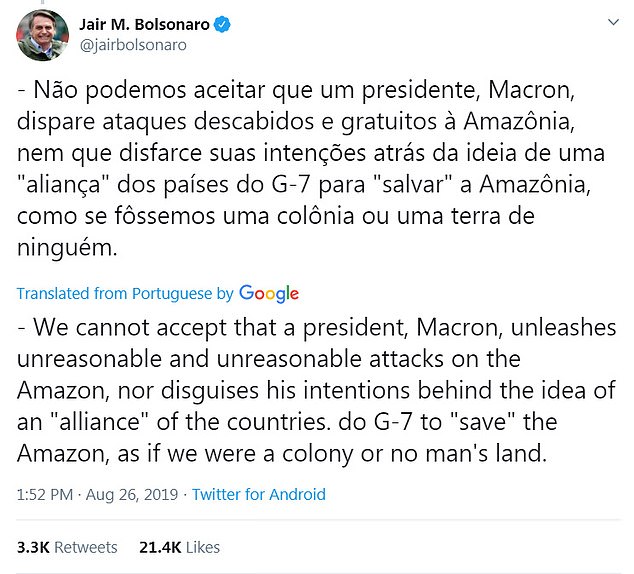 Bolsonaro previously tweeted that Macron’s ‘ludicrous and unnecessary attacks on the Amazon’ were unacceptable and accused him of treating the region ‘as if we were a colony.’ 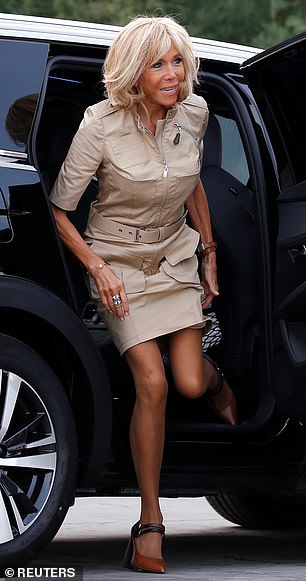 The rain forecast in the next 15 days is concentrated in areas that need it least, according to Maria Silva Dias, a professor of atmospheric sciences at University of Sao Paulo.

Less precipitation is expected in parts of the Amazon experiencing the worst fires, she added.

‘In some areas it could reduce the fires, not in general,’ said Matias Sales a meteorologist for Brazil weather information firm Climatempo.

The 15-day rain forecast is at or below the average for this period in previous years, according to Climatempo.

Brazilian environment Minister Ricardo Salles told reporters on Monday they had welcomed the G7 funding to fight the fires that have swept across 950,000 hectares (2.3 million acres) and prompted the deployment of the army. 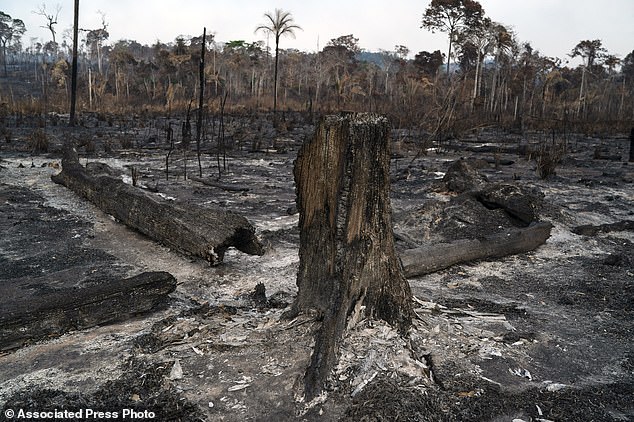 Trees are destroyed after a fire in the Alvorada da Amazonia region in Novo Progresso, Para state, on Sunday

But after a meeting between Bolsonaro and his ministers, the Brazilian government changed course.

‘Brazil is a democratic, free nation that never had colonialist and imperialist practices, as perhaps is the objective of the Frenchman Macron,’ Lorenzoni said.

Hundreds of new fires have flared up in the Brazilian part of the forest, data showed Monday, even as military aircraft dumped water over hard-hit areas.

Smoke choked Porto Velho city and forced the closure of the airport for nearly two hours as fires raged in the northwestern state of Rondonia where firefighting efforts are concentrated.

Bolsonaro – a climate-change sceptic – has faced criticism over his delayed response to the fires at home and thousands have taken to the streets in Brazil in recent days to denounce the destruction.