Turkish President Recep Tayyip Erdogan lashed out on Friday at counterpart Emmanuel Macron over his criticisms of NATO, saying it was the French president who was suffering ‘brain death’.

‘I am talking to France’s President Emmanuel Macron, and I will also say this at NATO. First of all, have your own brain death checked. These statements are suitable only to people like you who are in a state of brain death,’ Erdogan said in a televised speech.

He was referencing Macron’s much-publicised claim that NATO was suffering ‘brain death’ due to the lack of strategic cooperation among members.

Turkish President Recep Tayyip Erdogan delivers a speech in Istanbul today, hitting back at French President Emmanuel Macron’s comments about NATO’s ‘brain death’ from earlier this month.  Erdogan has suggested that it is Macron, not NATO, who is suffering from ‘brain death’

‘You know how to show off but you cannot even properly pay for NATO. You are a novice,’ Erdogan said.

‘Believe me, Macron is very inexperienced. He doesn’t know what fighting against terror is. That is why yellow vests invaded France,’ he added, referring to the French protest movement of the past year.

The French president’s office said they will summon the Turkish envoy to discuss the  ‘insults’ made by Erdogan earlier today.

Macron has strongly opposed Turkey’s military offensive against Kurdish militants in Syria, launched last month, and reiterated on Thursday that it ‘endangers the actions of the anti-IS (Islamic State) coalition, of which NATO is a member’. 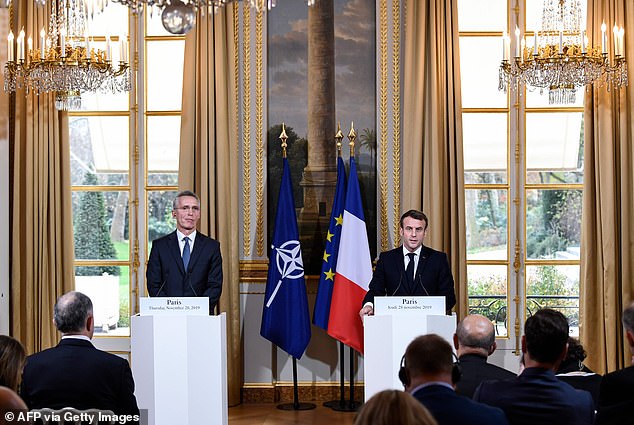 French President Emmanuel Macron (right) is pictured during a NATO news conference in Paris next to NATO Secretary General Jens Stoltenberg yesterday. At the start of November, Macron accused the transatlantic alliance of suffering a ‘brain death’

Erdogan said Ankara had a right to intervene in Syria given their shared border.

‘What is your business in Syria?’ he said, addressing Macron. ‘Jump up and down as much as you like … you will respect Turkey’s right to fighting against terrorism sooner or later. There is no other way.’

Erdogan is the latest head of state to disagree with Macron’s dismissal of the transatlantic alliance.

Leaders are chipping in over where they stand with regards to the military pact just four days before NATO’s 2019 London Summit.

On Wednesday, German Chancellor Angela Merkel put up a spirited defence of the treaty, saying Germany has a bigger interest today in ensuring the bloc stays together than during the Cold War.

Days before leaders of the transatlantic alliance are due to hold a summit, Merkel said NATO has been a ‘bulwark for peace and freedom’ over the past 70 years.

‘The preservation of NATO is in our own interest, more than during the Cold War,’ Merkel told parliament on Wednesday .