President Macron brands the French ‘Gauls who are resistant to change’

Emmanuel Macron has come under fire in France after he referred to his fellow countrymen as ‘Gauls’ who were resistant to change.

The president told French expats in Denmark that the Scandinavian country was a Lutheran nation which had ‘experienced transformations’ while the French were unwilling to face reforms.

The remark echoed previous comments by Macron, 40, saying the French ‘hate reforms’ and that the country is ‘unreformable’.

But he came under fire from all sides at home where a left-wing MP called his remarks ‘staggeringly stupid’ and far-right leader Marine Le Pen called it ‘arrogance and contempt’.

Emmanuel Macron (pictured yesterday in Helsinki, Finland) has come under fire in France after he referred to his fellow countrymen as ‘Gauls’ who were resistant to change

The French president admires the country for its economic model that mixes a strong social security system with rules allowing companies to easily fire workers.

Macron said on Wednesday:  ‘Let’s not be naive, what is possible is linked to a culture, to a people who are the product of their history.

‘These Lutheran people, who have experienced transformations in recent years, are not like the Gauls who are resistant to change,’ he said, using a term for the ancient tribes who lived on French territory more than 2,000 years ago.

‘Macron in Denmark is not only contemptuous of his own people but also very ignorant about the Gauls who were incredibly progressive,’ he added.

Ms Le Pen said: ‘As usual, he scorns the French while overseas. The Gauls will take great pleasure in responding to his arrogance and contempt.’ 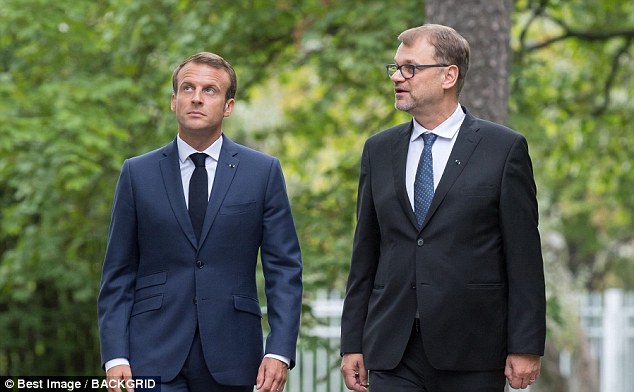 Emmanuel Macron meets Finland’s Prime Minister Juha Sipila in Helsinki yesterday. He faced criticism from both left and right after his comments about ‘Gauls’ in Denmark

The president hit back at the criticism while in Finland on the second leg of his Scandinavian trip.

Describing his remarks as a ‘light-hearted moment’, he said: ‘You need to step back from the controversy and social media.

‘I love France and the French people, make no mistake. I love it in all of its components,’ he added.

‘It’s not contemptuous to say things, the truth. We are not a country with a culture of consensus, of adjustments little by little.’