Alec Baldwin reprised his imitation of President Trump on the season finale of Saturday Night Live – this time with the Commander in Chief giving a commencement speech via Zoom in which he says he is honored to be the ‘valedictator’ while also drinking bleach to ward off the coronavirus.

‘Congratulations to the class of COVID-19,’ Baldwin’s Trump tells the graduates of St. Mary Magdalene By-The-Expressway.

Trump is picked to give the commencement speech after the students’ top choice to deliver the address – Barack and Michelle Obama – were unable to do so.

Alec Baldwin reprised his role as President Trump on Saturday Night Live. He took a sip of ‘invincibility juice’, or Clorox, which the president recommended people take in real life 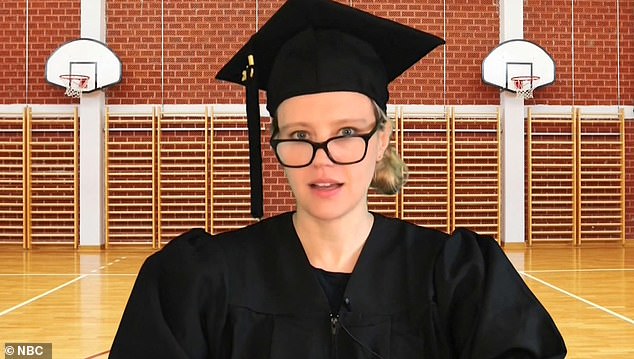 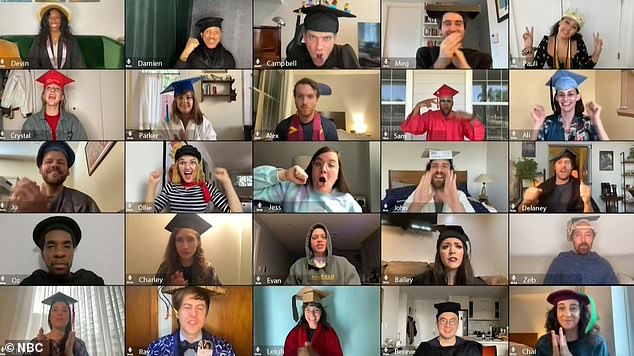 Trump made sure to congratulate the ‘graduating class of COVID-19’

The principal, played by Kate McKinnon, moved on to the students’ ‘eighth choice’ – President Trump.

Broadcasting from ‘The White House,’ Trump thanks ‘all of the people applauding’ – when in reality there’s just one student clapping her hand.

‘Now my valet got the virus so I had to do my own makeup,’ Trump says.

‘I had to resort to a Liza Minelli – TikTok makeup tutorial.’

In real life, a valet who works at the White House tested positive for COVID-19, as did Vice President Mike Pence’s press secretary Katie Miller.

On Saturday, it was learned that Dr. Anthony Fauci, the nation’s top infectious disease expert, and the heads of the Centers for Disease Control and Prevention and the Food and Drug Administration were self-quarantining after coming into contact with an infected White House staffer. 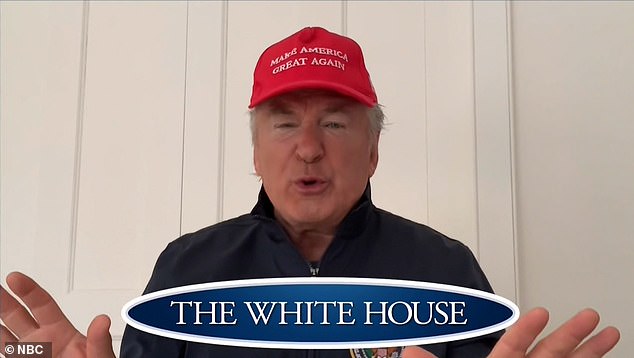 ‘I’m so honored to be your valedictator, but today is not about me,’ the president says in the SNL skit.

‘Valedictator’ is a word that merges ‘valedictorian’ – the student who earns the highest grade point average – and ‘dictator.’

Even though Trump initially says that he wants the focus to be on the students, he then pivots to talking about himself, saying he’s been ‘treated very poorly.’

‘Even worse than they treated [Abraham] Lincoln,’ Baldwin’s Trump says.

When one of the graduates, Damien, who is played by Chris Redd, points out that the nation’s 16th president was assassinated, an agitated Trump says: ‘I’m not taking questions, Beebop. I’m only telling you the truth.’

‘Lincoln would agree,’ the president says. ‘He’s probably smiling up at me from hell, right now.’ 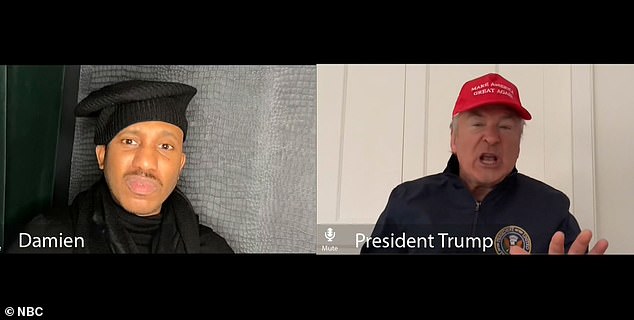 At one point, Trump claimed he was treated worse than Abraham Lincoln, but one graduate, Damien, pointed out that the 16th president was assassinated

When another African American graduate, Sam, played by Kenan Thompson, objects, Trump asks to mute him and all the other ‘jazz types.’

Trump then tells the graduates they have a lot to look forward to when it comes to the job market.

‘Don’t forget about coal,’ Trump says. ‘It’s in the ground and you just dig down and grab it.’

‘But I don’t want to do that,’ one of the graduates tells Trump, who ignores him and moves on.

The president then said that he was going to make sure ‘colleges are open in the fall.’

‘Online college is a scam,’ the president said.

‘My online college was ranked number one craziest scam every year it was open,’ Trump said.

That was a reference to Trump University, the now-defunct business venture that was shuttered after several people filed lawsuits claiming they were defrauded.

In November 2016, the Trump Organization agreed to pay $25million to settle two class action lawsuits and one lawsuit brought by the State of New York.

In the SNL cold open, a few of the graduates begin to demand that Dr. Anthony Fauci give the commencement address.

Fauci, the nation’s top expert on infectious diseases, is a member of Trump’s coronavirus task force.

‘Don’t you hate when these elite medical experts tell you what to do?’ the president says.

He then coughs and takes a sip of Clorox bleach, which he calls ‘good old invincibility juice.’ 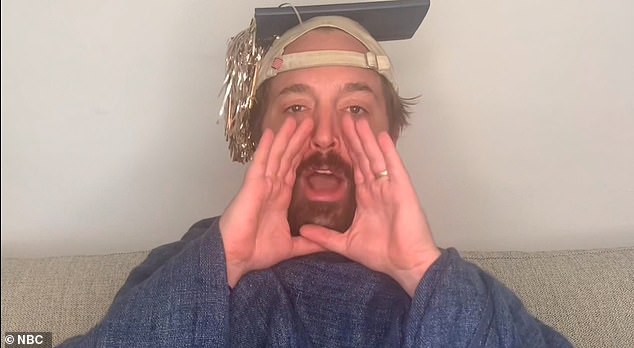 The graduates, like the one played by Beck Bennett (above), demanded that Dr. Anthony Fauci deliver the commencement speech

In real life, Trump was ridiculed after he suggested that those infected with COVID-19 could drink cleaning disinfectant and bleach to rid the body of the disease.

The president later claimed he was being sarcastic.

Many of the graduates log out of the Zoom call in disgust after the president drank the bleach.

In the sketch, Baldwin’s Trump then begins to motivate the graduating students.

‘Believe in yourselves and you can achieve anything,’ he says. ‘Look at me.’

Trump continues: ‘I started as the son of a simple, wealthy slumlord, and grew to become a billionaire, the president, and the world’s leading expert on infectious diseases.’

The president then encourages the graduates to ‘surround yourself with the worst people you can find.’ 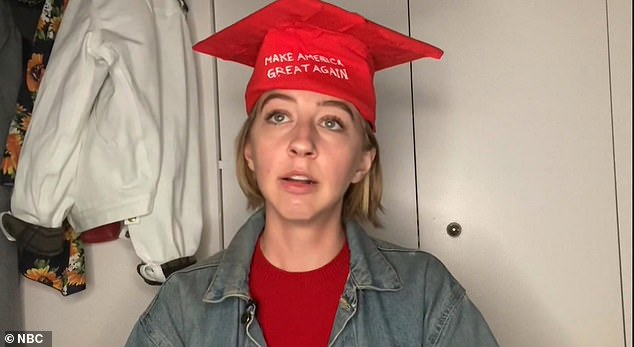 While Trump was the ‘eighth choice’ of students to speak, at least one was a fervent supporter

‘If you don’t understand something, just call it stupid. Never wear sunscreen.

‘And live every day like it’s your last because we’re gonna let this virus run wild.’

Trump then claims the virus was started ‘in a lab, in Obama.’

He then offers up his favorite inspirational quote: ‘Reach for the stars, because if you’re a star, they let you do it.’

That is a reference to Trump being caught on a hot mike describing to Access Hollywood host Billy Bush how he would grope women because he was a ‘star’ and ‘they let you do it.’

In the sketch, when Trump asks ‘Who’s with me?’, all of the graduates except for one supporter log off the Zoom chat.

‘This crowd has thinned out faster than Adele,’ Trump remarks, a reference to the British singer’s dramatic weight loss in recent months.