President Donald Trump has put on hold $200million meant for recovery efforts in Syria, according to a new report.

The White House has ordered the State Department to freeze the funds as the Trump administration reassesses American involvement in the warn-torn nation, the Wall Street Journal reported on Friday.

The president allegedly reached the decision after reading a news report that said his administration had recently added $200million to stabilizing efforts – a move announced by now-fired Secretary of State Rex Tillerson in Kuwait last month.

President Trump has often expressed a desire for U.S. troops to leave Syria. During a Thursday speech in Ohio (pictured), he said: ‘Very soon, very soon, we’re coming out’

The frozen money was meant for recovery efforts such as removing unexploded weapons and restoring water, power and electricity.

The president has often expressed his desire for U.S. troops to leave Syria and for regional allies such as Saudi Arabia to take on more of the burden in the nation currently dealing with both a civil war and ISIS.

‘Very soon, very soon, we’re coming out,’ he said during a speech in Ohio on Thursday. ‘We’re going to get back to our country, where we belong, where we want to be.’

The State Department, however, has not confirmed reports of the freeze.

‘In line with the president’s request to review all international assistance, we continually reevaluate appropriate assistance levels and how best they might be utilized, which we do on an ongoing basis,’ the spokesperson told The Hill.

As the Journal points out, reduced American presence in Syria could open the way for Iran and Russia to become the leading foreign powers in the troubled and geopolitically important nation. 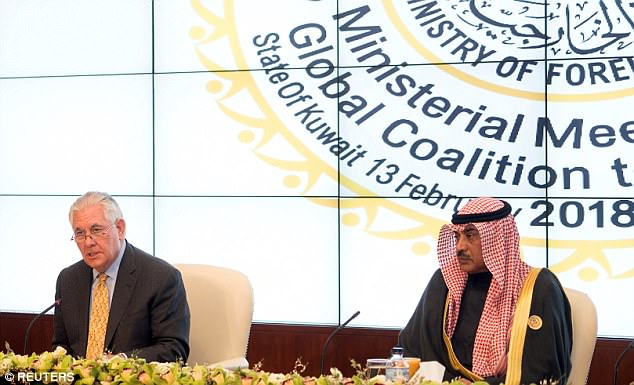 It could also offer a lifeline to to ISIS, which has lost much of the power it once held in the region but still holds on to some land.

The president’s move comes as the fight against ISIS in Syria has stalled – although the U.S.-lead coalition has taken back most of the territory once controlled by the militant group, efforts to take the land ISIS still holds have flat-lined.

On Thursday, two coalition personnel, including an American, and five were wounded by a roadside bomb in Syria, in a rare attack since the U.S.-led coalition sent troops into the country.

Trump’s view on Syria does not really match that of his administration. Just hours before his statements on Thursday, a Pentagon spokesperson suggested the military was in Syria for the long-run. 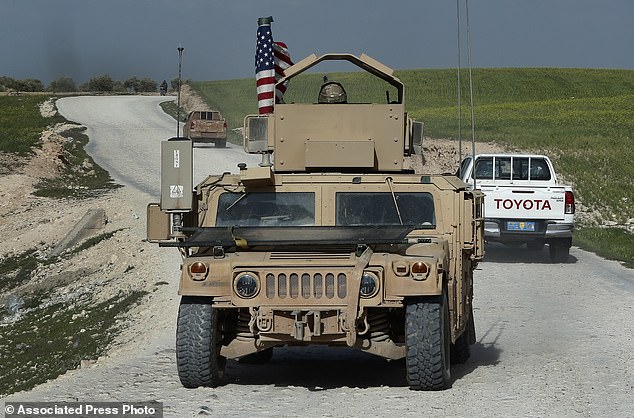 Two coalition personnel were killed and five others wounded on Thursday night by a roadside bomb in Syria. U.S. troop’s Humvee is pictured passing vehicles of fighters from the U.S-backed Syrian Manbij Military Council

Chief Pentagon spokesperson Dana White said :’Our commitment to win must outlast the so-called physical caliphate, and the warped ideas that guide the calculated cruelty of ISIS.’

And Trump’s new Secretary of State Mike Pompeo, a known political hawk, is likely to take a stand similar to Tillerson’s when it comes to Syria, having expressed in the past it is in American interest to depose of dictator Bashar al-Assad.

‘It is difficult to imagine a stable Syria that still has Assad in power. He is a puppet of the Iranians and therefore it seems an unlikely situation where Assad will be sitting on the throne and America’s interests will be well served,’ the former CIA director said in July 2017.