President Trump said he would not be attending former first lady Barbara Bush’s memorial service Saturday in Houston. Melania is instead attending, while he is spending the day golfing.

The White House said in a statement Friday that Trump skipping the service would help ‘avoid disruptions’ the president’s increased security presence would cause, as well as ‘out of respect for the Bush Family and friends.’

Several reporters in his motorcade pool shared that the president was en-route to the golf course around 8am Saturday morning in Florida.

A spokesperson explained that instead of the president being present in Houston, that ‘First Lady Melania Trump will attend the memorial service for Barbara Bush this Saturday on behalf of the First Family.’

The former president shook hands with mourners Friday while sitting by his wife’s side during the public viewing. Saturday is a by-invite viewing and funeral. President Trump has said he will not be attending ‘out of respect for the Bush Family and friends’ 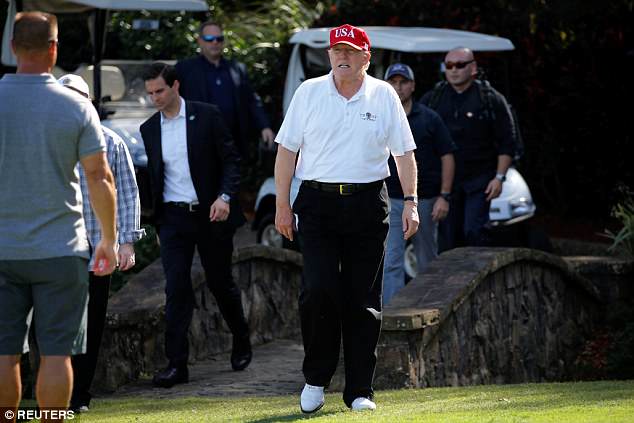 The president will not be attending former first lady’s private viewing on Saturday, and will be golfing. However Melania will be in attendance on behalf of the First Family

However, Melania was confirmed to attend earlier this week on her own regardless, expressing her own desire to pay her respects.

A spokesperson for the First Lady announced Wednesday she would attend the services to pay ‘respects to Barbara Bush and the entire family at the funeral on Saturday.’

After a service the private viewing at St. Martin’s Episcopal Church, Barbara will be be buried behind the George Bush Presidential Library in College Station.

The gated plot is in an area surrounded by trees and near a creek where the couple’s 3-year-old daughter, Robin, is buried. She died of leukemia in 1953. 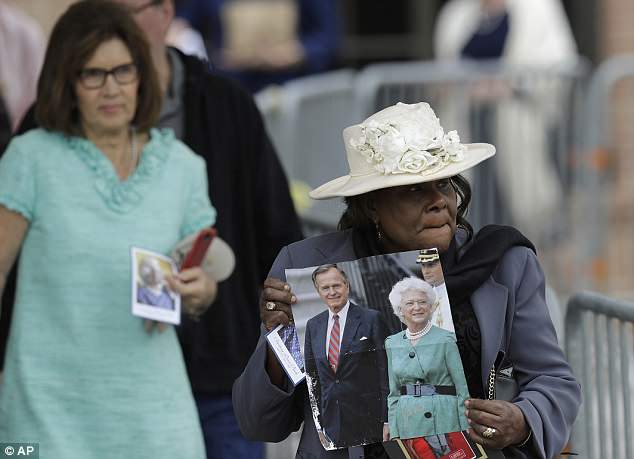 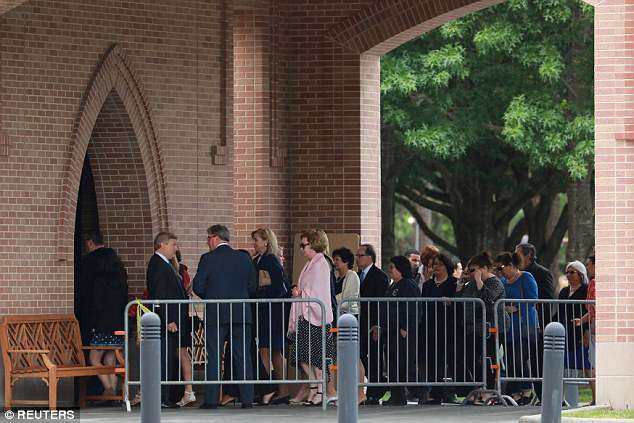 People filled the church throughout the day on Friday to pay their respects. Saturday will be an invite only viewing before Barbara is buried 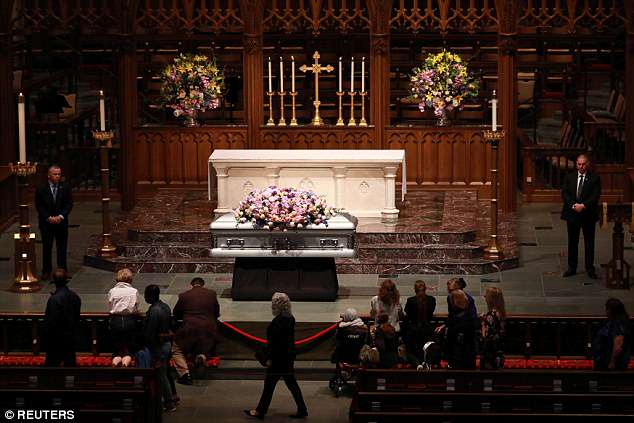 Secret Service agents, who worked with Mrs Bush after she left the White House, stand either side of her coffin 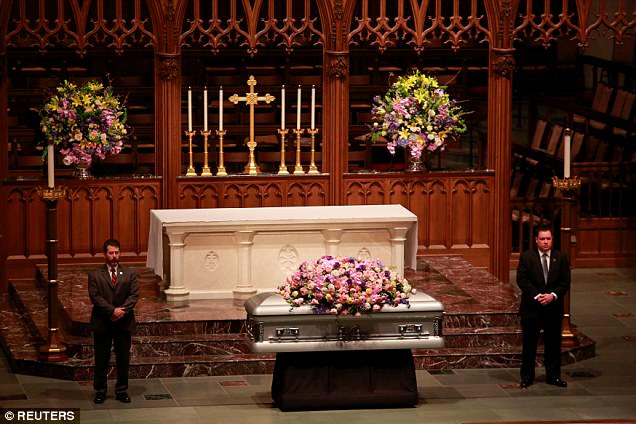 St. Martin’s Episcopal Church is the the nation’s largest Episcopal church. Barbara’s body will lie in repose there until Saturday 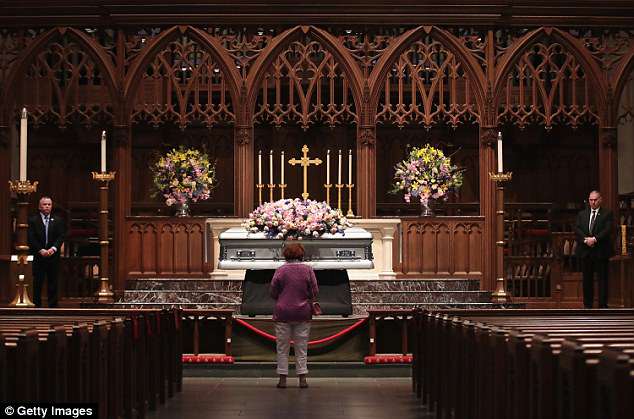 A woman grieves alone in the middle of the church, in front of Barbara Bush’s body, during a day of solemn reflection 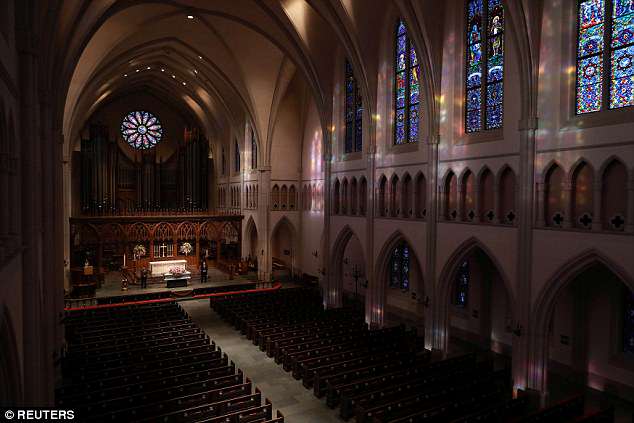 A hearse arrived with her casket before daybreak on Friday. On Saturday after a private service, Barbara’s body will be buried on the grounds of the George Bush Presidential Library 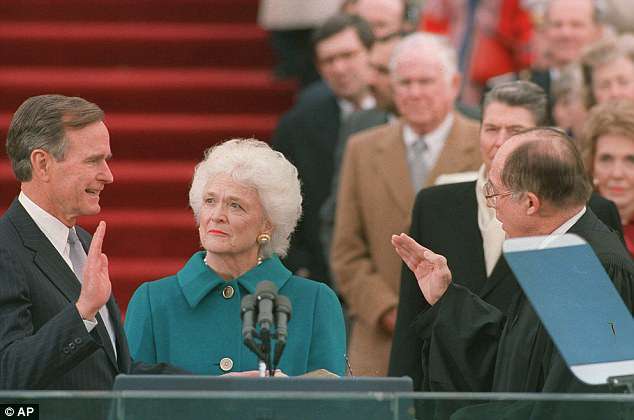 President George H.W. Bush raises his right hand as he is sworn into office as the 41st president of the United States by Chief Justice William Rehnquist outside the west front of the Capitol on Jan. 20, 1989. First lady Barbara Bush holds the bible for her husband (file) 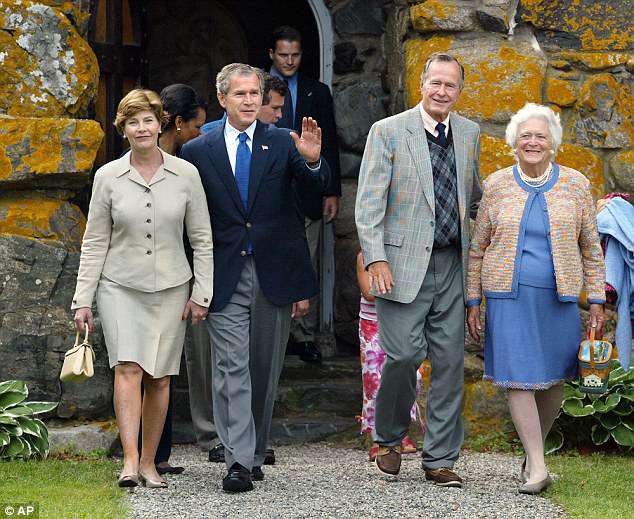 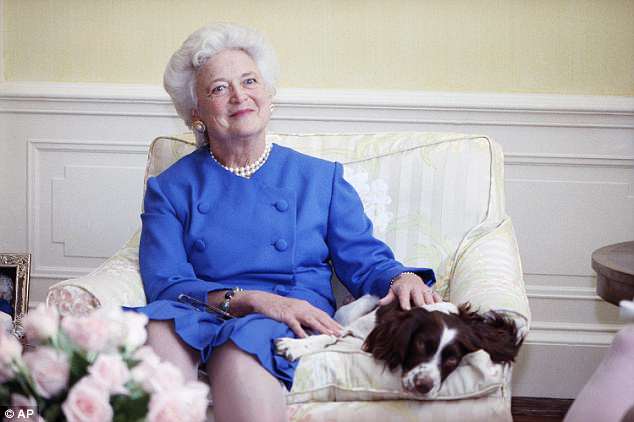 First lady Barbara Bush poses with her dog Millie in Washington in 1990. Barbara Bush, the snowy-haired first lady whose plainspoken manner and utter lack of pretense made her more popular at times than her husband, President George H.W. Bush, died Tuesday, April 17, 2018

Bush was the matriarch of a political dynasty that Trump often clashed with during his 2016 campaign.

The White House says Trump will not attend ‘to avoid disruptions due to added security, and out of respect for the Bush Family and friends attending the service.’

The president is expected to be at his Florida estate this weekend.

Trump has offered his condolences to the Bush family, calling Barbara Bush ‘a titan in American life.’

Bush died Tuesday at her Houston home. She was 92.