President Trump on Thursday met with the family of murdered Fort Hood soldier Vanessa Guillen in the Oval Office to discuss the #IAmVanessaGuillen bill, which would help victims of sexual harassment in the military.

Guillen, 20, was first reported missing in April after telling family and friends that she was being sexually harassed by a superior. Her remains were found on June 30.

Authorities say fellow soldier Spc. Aaron Robinson, 20, killed her with a hammer and stuffed her body in a box to carry off post.

Robinson, who has since committed suicide, allegedly enlisted his 22-year-old girlfriend Cecily Aguilar to help dismember and dispose of Guillen’s body.

On Thursday, Trump expressed his condolences  to the family. He vowed to carry out a rigorous investigation into her death, saying he did not want it to be ‘swept under the rug’, and offered to personally pay for her funeral if the family needed financial help.

‘We didn’t want this swept under the rug. They’re doing a very strong investigation … We’ll get to the bottom of it.

‘If I can help you out with the funeral, I’ll help you out. Financially,’ he said.  When asked by reporters if he’d paid for any funerals before, he said: ‘I have. Personally, I have to do it personally.’

U.S. President Donald Trump listens to Gloria Guillen, the mother of slain Fort Hood soldier Vanessa Guillen who was was found dead after disappearing from the army base in Texas, during a meeting in the Oval Office at the White House in Washington, U.S., July 30 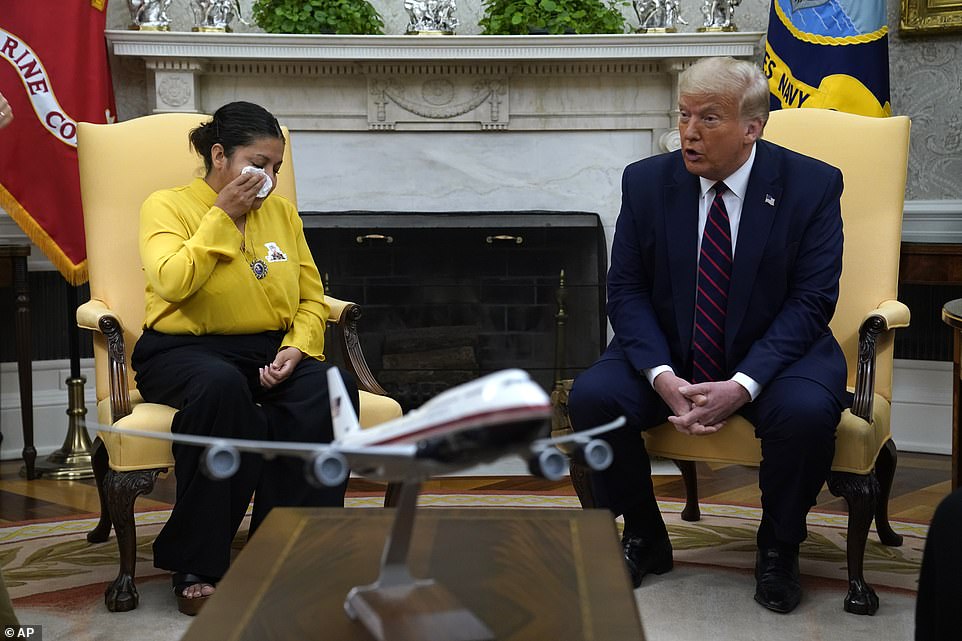 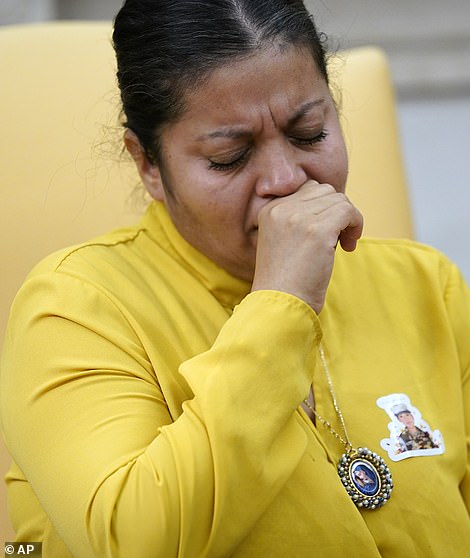 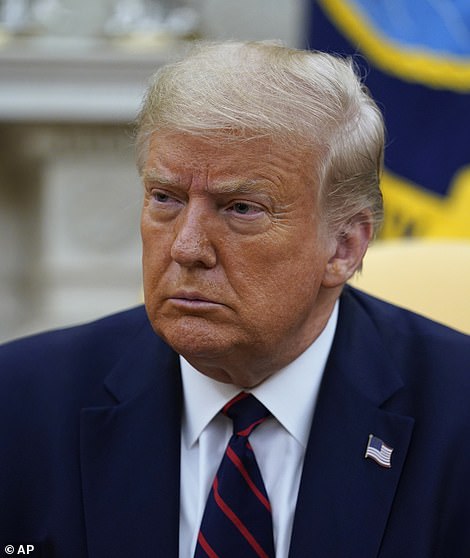 Vanessa’s mother was distraught during the meeting. Trump, moved by her emotions, said he could tell there was ‘a lot of pain’ and offered to help the family financially with her funeral 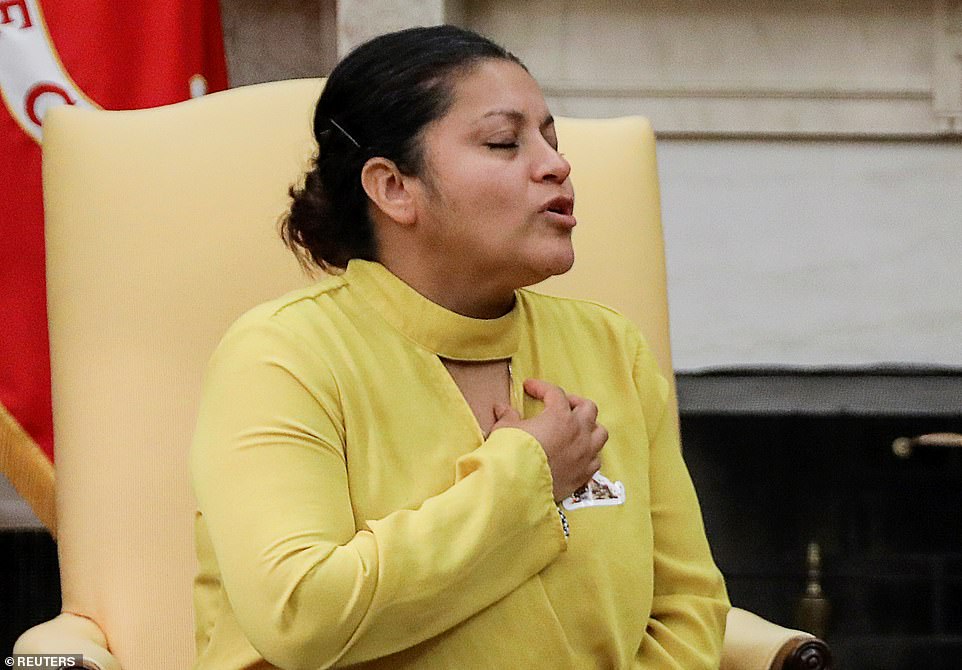 Gloria is now appealing for a bill to stamp out violence in the military. Trump is expected to endorse it

Gloria, Vanessa’s mother, spoke in Spanish and a translator relayed her comments to Trump.

‘Thank you very much for having us,’ she began.

‘Her daughter died in service of the country from the hand of people who are in the military. She just wants your help to get the truth,’ the translator said.

‘I saw this on one of the shows recently and I was just looking and it hit me very hard. I saw what happened to your daughter Vanessa, who is a spectacular person and respected and loved by everybody inlcuding in the military. 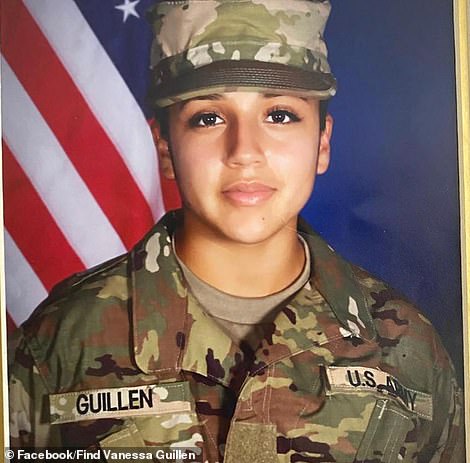 ‘I invited you to the White House…the FBI and the DOJ are involved. The people at Fort Hood are very much involved. We didn’t want this to be swept under the rug, which could happen,’ he said.

The family are advocating for a bill in her honor which would help tackle sexual harassment.

Family attorney and author of the bill, Natalie Khawam, was also there for the meeting.

She said there is systemic sexual harassment at Fort Hood that must be addressed.

The #IAmVanessaGuillen bill would allow service members to report sexual harassment claims to a toll-free 800 number.

Guillen’s family and Khawam said the Vanessa had been sexually harassed by a colleague who allegedly watched her while she showered.

Guillen told her family she did not report the incident over fears of retaliation. 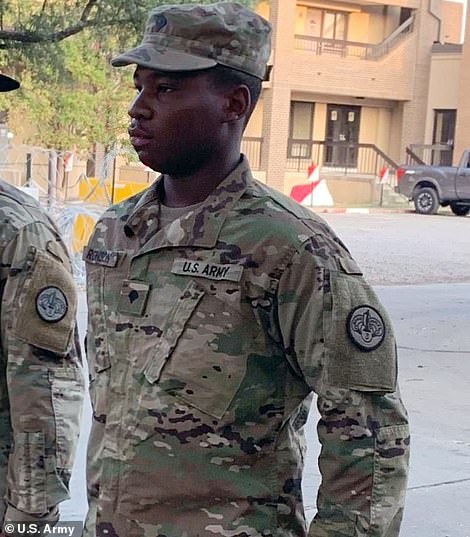 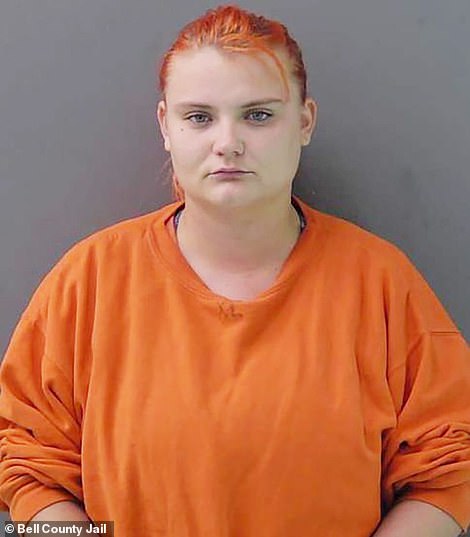 Spc. Aaron Robinson (left) allegedly bludgeoned Guillen with a hammer before enlisting his girlfriend, Cacily Aguilar (right) to help dismember the body and bury it 20 miles from Fort Hood in Killeen, Texas 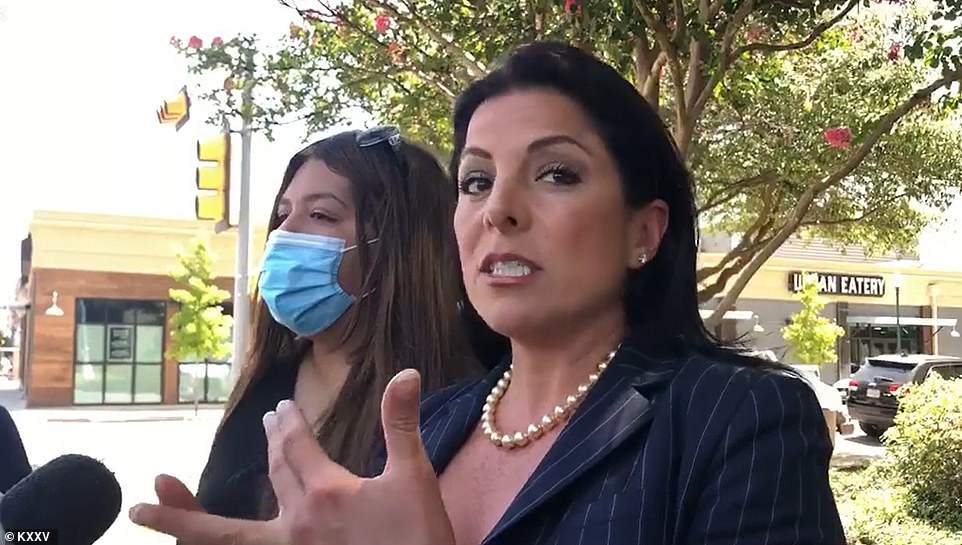 Guillen family attorney Natalie Khawam (right): ‘I don’t know a person in the world that doesn’t think that this is the greatest thing on Earth’ 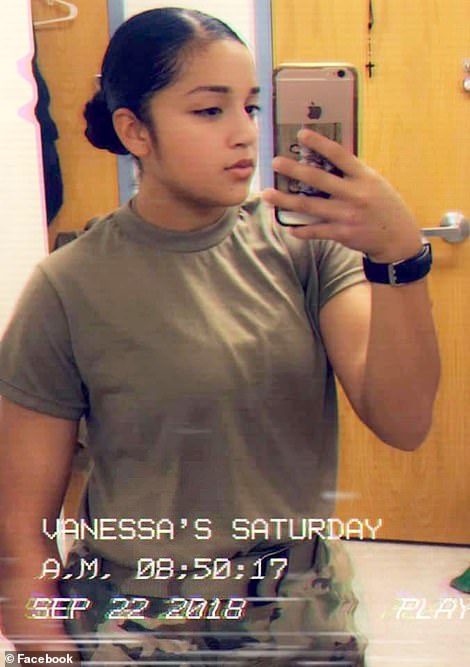 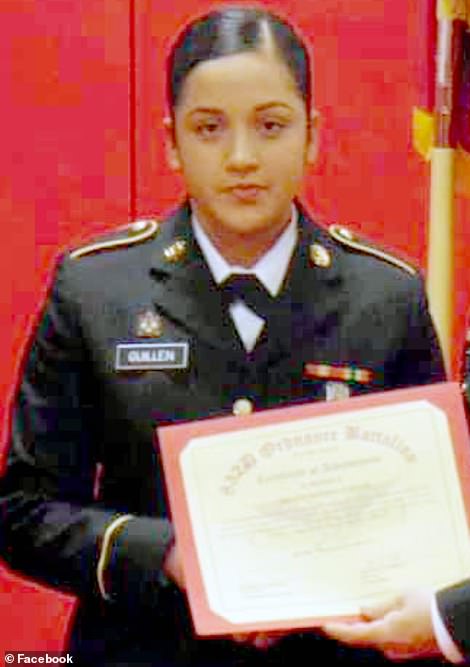 ‘We will not accept anything less than justice for Vanessa,’ wrote Khawam in a statement.

‘When someone volunteers to serve our country, they deserve to be treated with dignity and respect by their fellow service members. This bill will help us provide the protection and respect to others that was denied to Vanessa.’

After the march, the Guillen family and Khawam are scheduled to meet with President Trump to discuss the proposal.

Trump is expected to host a press conference after the meeting in support of the #IAmVanessaGuillen bill at 12:30pm.

He previously spoke to Telemundo about the Guillen’s death, which he called ‘horrible. Absolutely horrible.’

Then, the Guillen family and Khawam will go to The Ellipse, a park near the White House, to discuss their meeting with Trump and the next steps to take.

The meeting with Trump comes after Robinson’s girlfriend Cecily Aguilar was denied bail for her alleged role in the horrific death.

Aguilar was accused of helping Robinson dismember Guillen’s body and bury it in a shallow grave near Fort Hood, but issued a not guilty plea to three counts of evidence tampering.

Aguilar was denied bail by a judge during a hearing earlier this month and remains in custody,

Robinson died via suicide on July 1 as investigators closed in on him for the murder. According to reports, Aguilar was either Robinson’s estranged wife or girlfriend.

Aguilar told reportedly investigators that Robinson claimed to have used a hammer to beat to death Guillen in a Fort Hood arms room, then stuffed her body into a box to carry off post.

She allegedly said that Robinson picked her up from her job at a gas station on either April 22 or April 23. 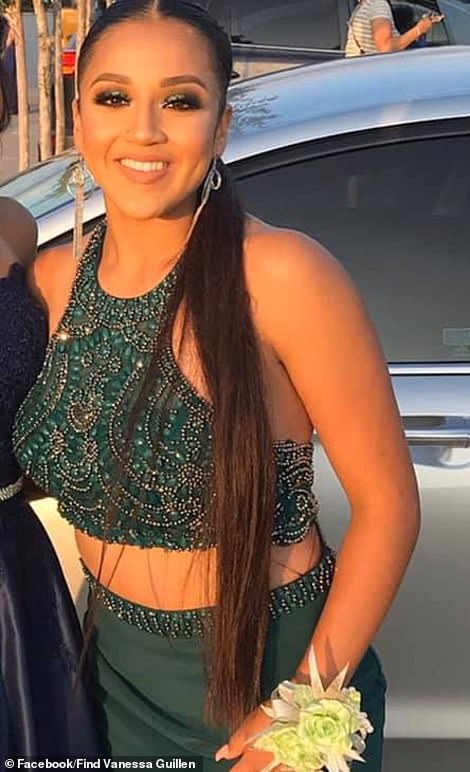 He then allegedly took her to a site near Leon River, showed Guillen’s body to her, and together they tried to dispose of the body using multiple different methods over the course of several days.

Such methods of disposal were said to include mutilating and attempting to burn Guillen’s body, a police affidavit details.

When the body didn’t completely burn, Aguilar allegedly said that they buried the remains in three different holes.

Authorities then asked Aguilar to call Robinson. During the call, which investigators were listening in on, Robinson did not deny what they had supposedly done to Guillen and also was heard saying, ‘Baby, they found the pieces. They found pieces.’

Before she died, Guillen’s relatives said that she had told them she was being sexually harassed and was too afraid to come forward about it.

An Army official told ABC News that during the Army’s Criminal Investigation Command’s investigation into her disappearance, they found information suggesting that she may have experienced harassment at the base.

The harassment, however, did not appear to be sexual, although investigators said that found that some of the comments made about Guillen were sexual in nature.

Army investigators also found that neither the harassment nor the comments stemmed from Robinson.

The Army said that Guillen and Robinson were not in the same command and did not work in the same building.

Army investigators also said that they didn’t find any evidence of a relationship between Guillen and Robinson, other than a professional one, after checking phone records and text messages.

In an interview with ABC last week, Guillen’s mother, Gloria, slammed Fort Hood officials for lying to her, calling them ‘clowns in a circus’.

She told the station that she wants Congress to investigate Fort Hood’s handling of her daughter’s disappearance.

Vanessa’s sisters, Mayra and Lupe, also spoke out about their sister’s murder.

‘She was taken away from me in the most horrible way, yet they take it as if it was a joke,’ Lupe told ABC 11.

‘My sister is no joke. My sister’s a human being just like me, her, all of us.’

Mayra told the station that she will continue to speak out about her sister’s murder ‘because we cannot let this happen again’.

‘My sister was taken away. She could have been your sister, your friend,’ Mayra added. 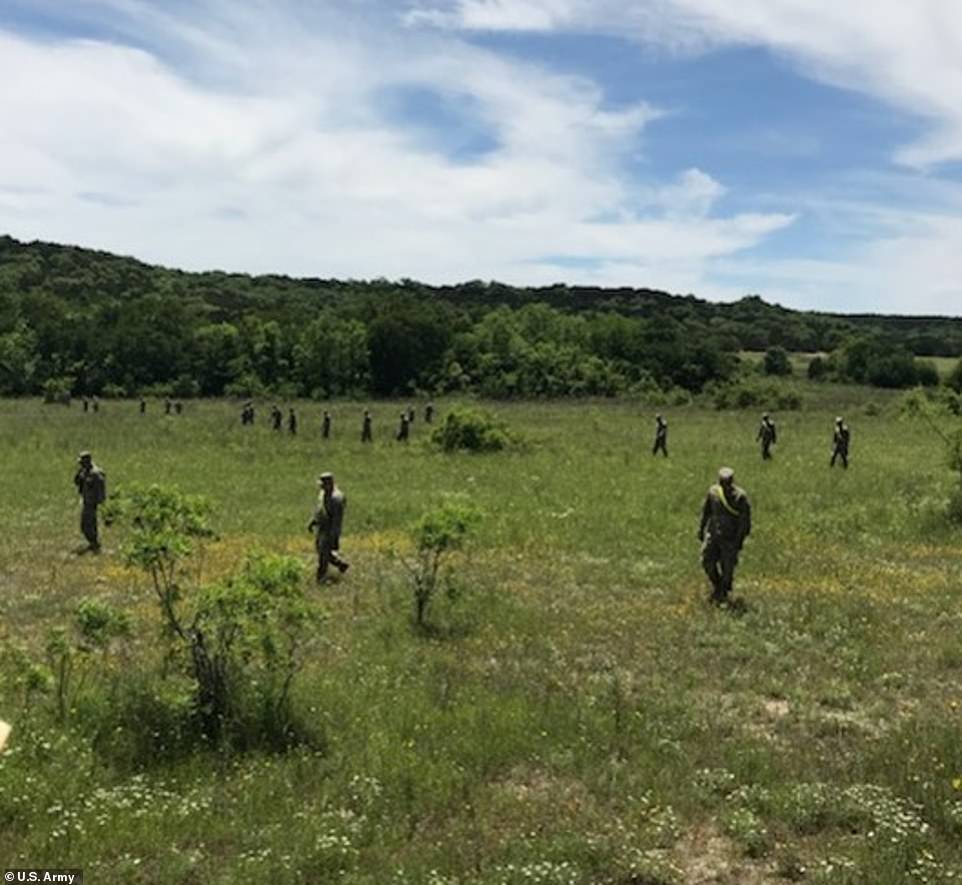 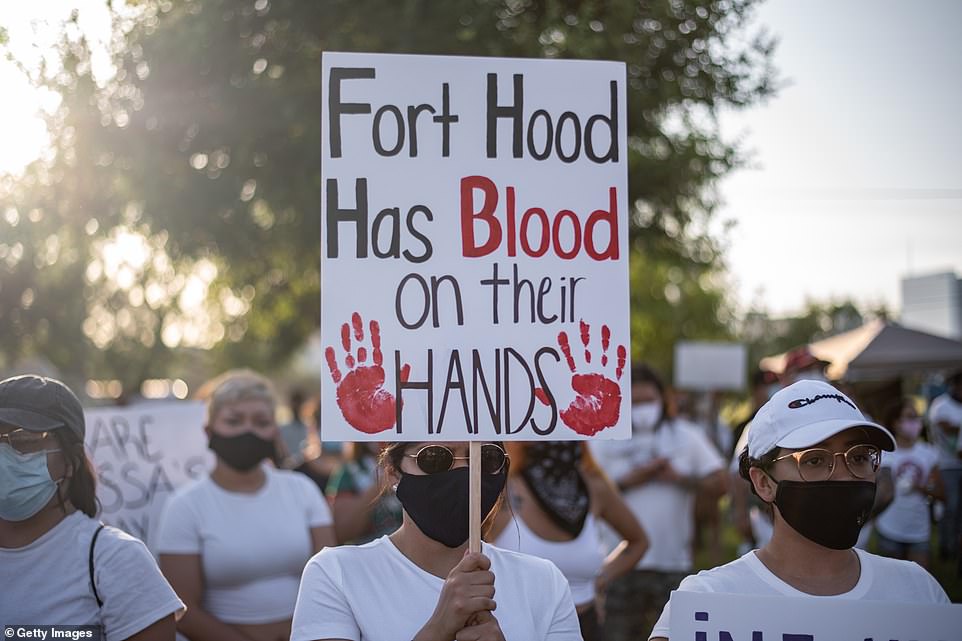 Protests have unfolded in various cities in Texas denouncing the Army and Fort Hood and demanding answers into her and other disapperances at the base. A march and vigil for Guillen pictured in Austin, Texas on July 12 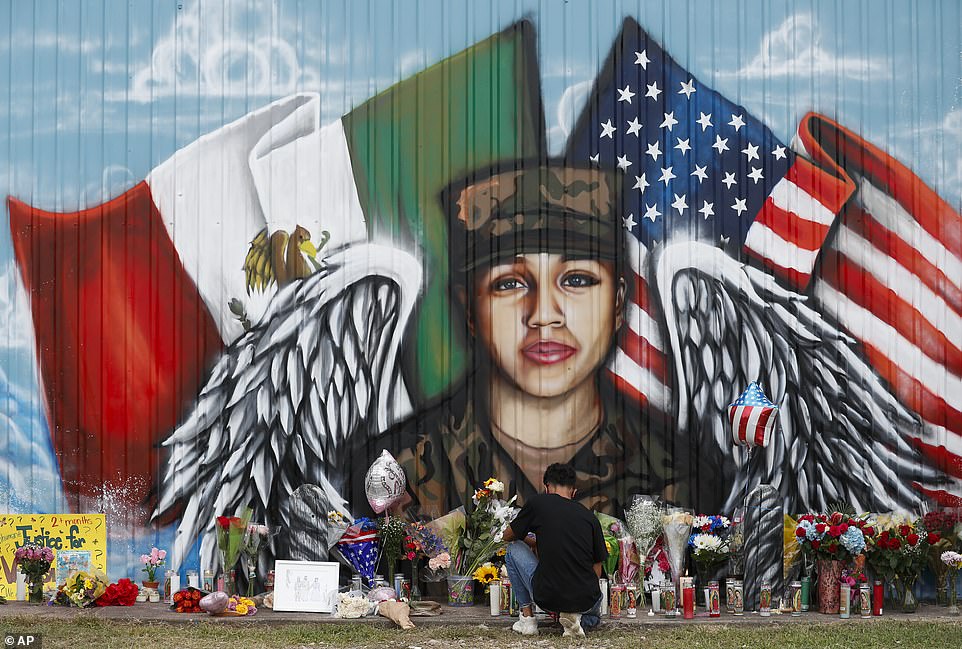 Juan Cruz, the boyfriend of Vanessa Guillen, kneels in front of a mural honoring her on Sunday in Houston, Texas, her hometown

Secretary of the Army Ryan McCarthy said the Army would be conducting an independent investigation of Fort Hood, ‘the command culture and climate’, and the circumstances surrounding Guillen’s death.

The news was first announced during a press conference with representatives from the League of United Latin American Citizens and Rep. Sylvia Garcia.

Khawam, however, says the Army’s independent investigation is not enough.

‘That’s not congressional investigation, that’s not going to get everybody exposed, every piece of that base looked into because at the end of the day you never know who on that panel the relationship they have, what involvement they have,’ she said.

The attorney is also conducting her own independent investigation as the push for a congressional probe continues.

‘This is why we’re going to do this…so we never forget this happened. The only way to never forget something is to fix it and get that reform in there so our military and soldiers never fear that this happens to them.’

Robinson fatally shot himself on July 1 while police were trying to take him into custody.

Aguilar could face 20 years in jail and a $250,000 fine if convicted of her charge. The judge did not set a date for her next court appearance.

In addition to Guillen, authorities discovered the bodies of Pvt. Mejhor Morta, 26, and Pvt. Gregory Wedel-Morales, 24, around the same time as Guillen.

Morta, 26, of Pensacola, Florida was found unresponsive on July 17 near Stillhouse Hollow Lake, which sits around 15 miles away from Fort Hood.

Wedel-Morales, of Sapulpa, Oklahoma was discovered on June 19 after disappearing in August 2019.

The Army listed Wedel-Morals as a deserter for the 10 months after he went missing. 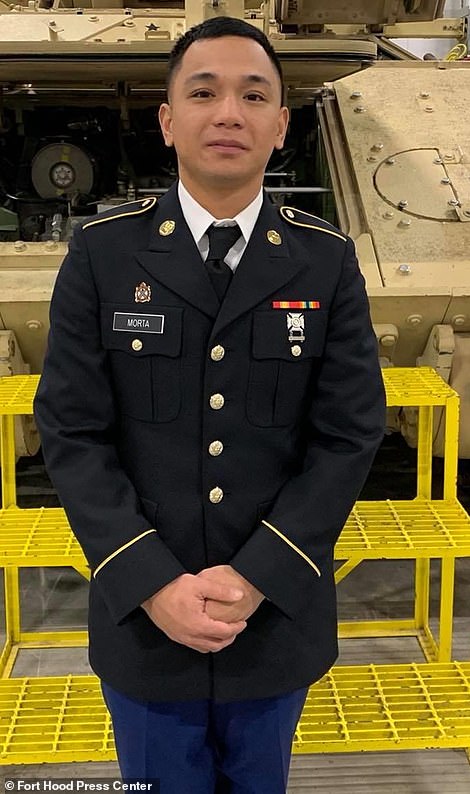 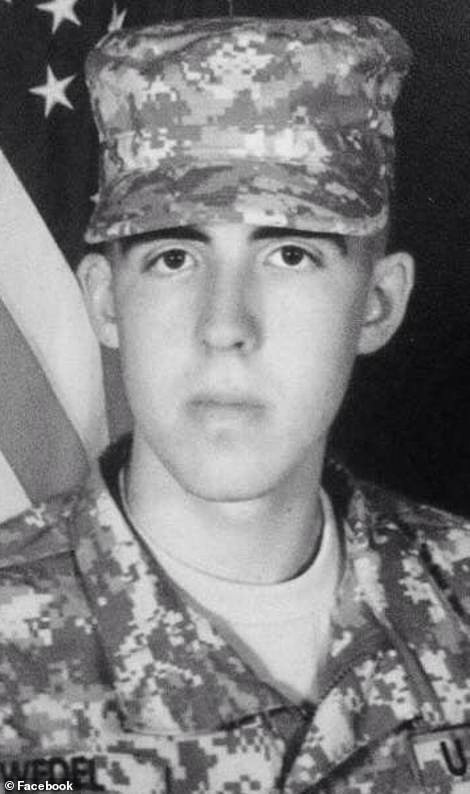 The body of a third Fort Hood soldier has been discovered near the base in a month. Pvt. Mejhor Morta, 26, of Florida was found unresponsive on July 17 near Stillhouse Hollow Lake