Despite the detainment of a man being charged for sending a pipe bomb to the news outlet, Donald Trump encouraged crowds in chanting ‘CNN sucks’ Friday at a rally in Charlotte.

The American President was back to his unprofessional ways after a brief hiatus in Wisconsin earlier in the week when he asked for the country to unite after investigators had intercepted a dozen suspicious packages.

His words came the same day as the arrest in Florida of a Trump supporter Cesar Sayoc – a man who boasted ‘CNN sucks’ stickers on his Trumpmobile van. 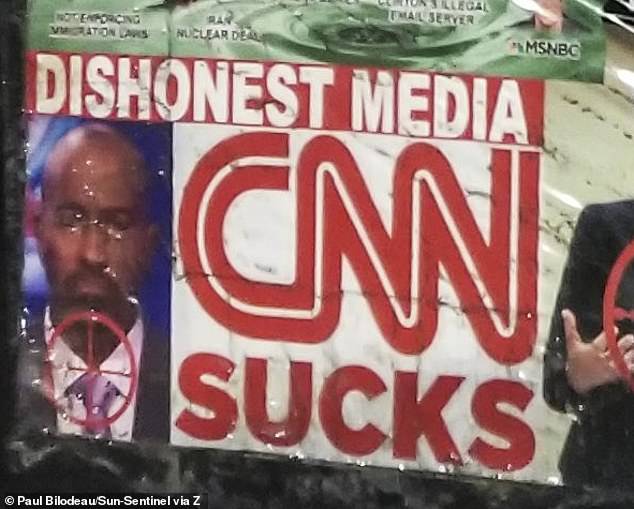 Trump started well in North Carolina with another message to come together but quickly seemed hypocritical.

‘In recent days, we’ve had a broader conversation about the tone and civility of our national dialogue,’ Trump said at the Bojangles Coliseum. ‘Everyone will benefit if we can end the politics of personal destruction. We must unify as a nation in peace, love and in harmony.’

However he then called the media ‘unfair’ and claimed the press used ‘attacks’ to divide the nation.

‘The media’s constant, unfair coverage, deep hostility and negative attacks only serve to drive people apart and to undermine healthy debate,’ he said.

Trump later accused reporters of trying ‘to use the sinister actions of one individual to score political points’ against him.

His comments no doubt encouraged the vulgar chant connected to the MAGAbomber. 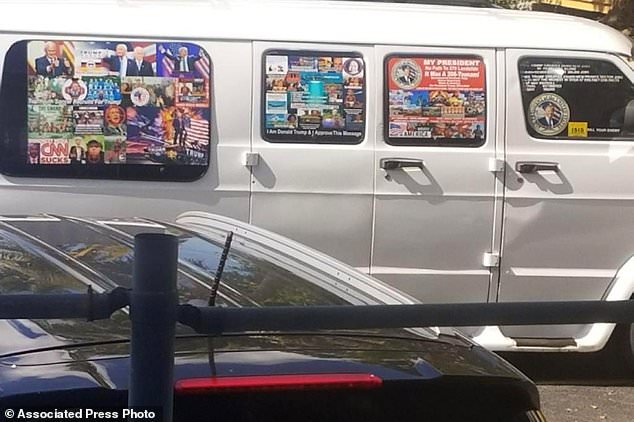 This November 1, 2017, photo shows windows covered with an assortment of stickers in Florida. Federal authorities confiscated his van in connection with the mail-bomb scare 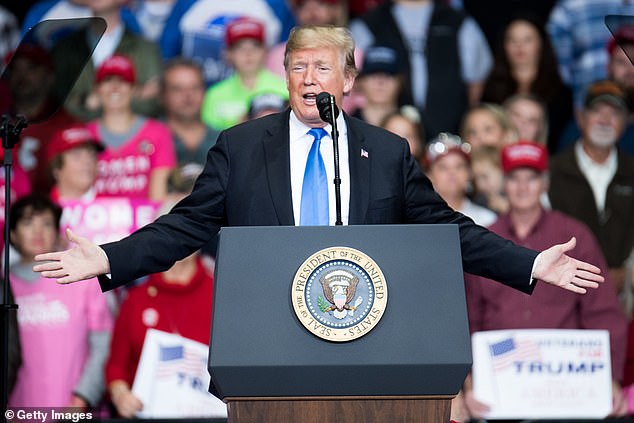 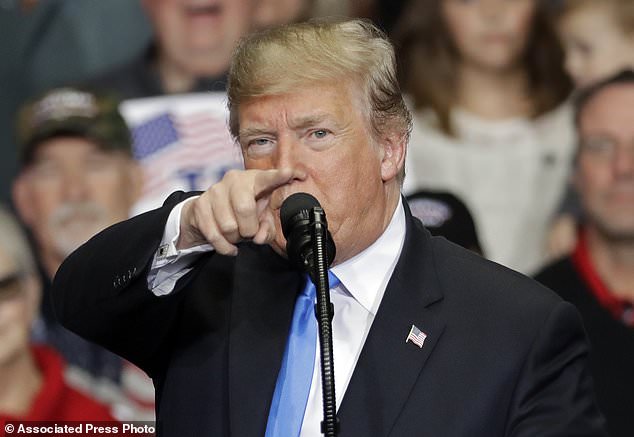 Jeffrey Dean Zeleny, a Senior White House Correspondent for CNN, revealed the crowd had even been preparing to use the slogan before the rally began.

‘Here at the Bojangles Coliseum in Charlotte, the crowd is already warming up the “CNN Sucks” chant – two hours before tonight’s rally,’ he posted.

MAGAbomber Sayoc’s threatening deliveries were meant for personalities and news media that the suspect believed were ‘anti-Trump’. 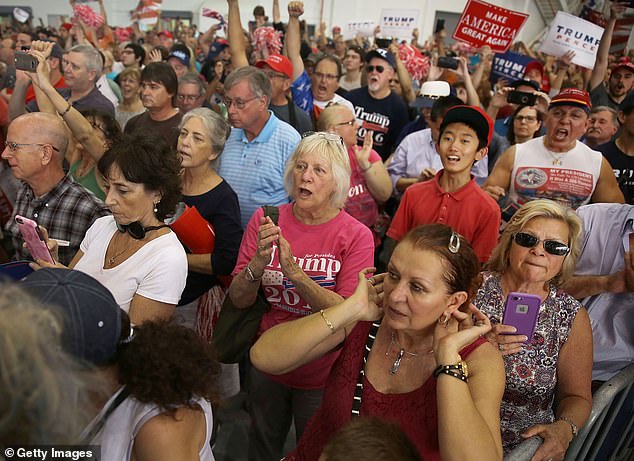 Cesar Sayoc (far right in red hat) was seen as President Donald Trump spoke during a campaign rally at the AeroMod International hangar at Orlando Melbourne International Airport on February 18, 2017 in Melbourne, Florida 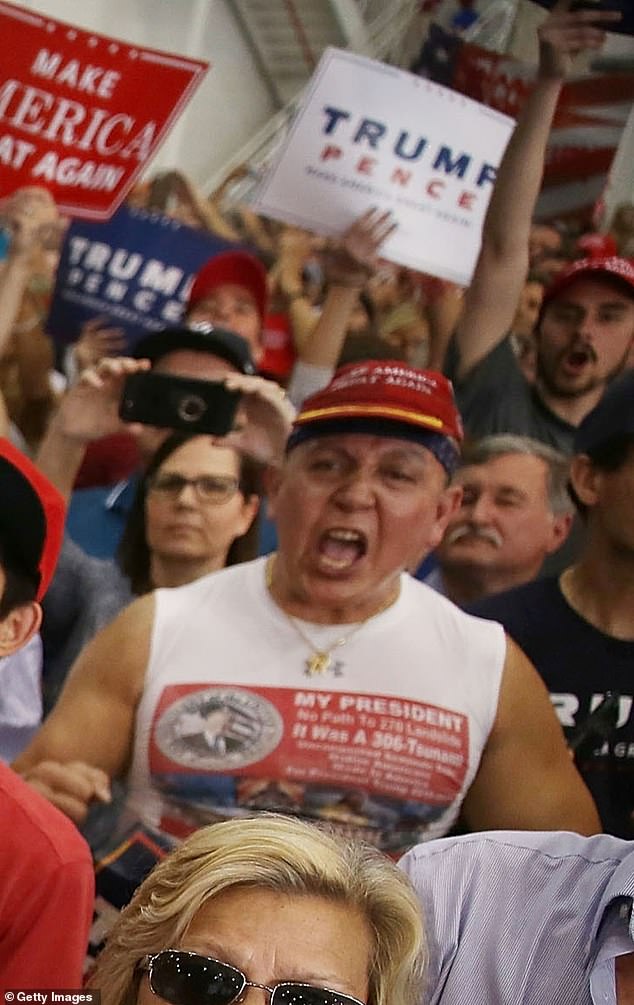 Sayoc was seen getting riled up as Trump spoke during a campaign rally at the AeroMod International hangar at Orlando Melbourne International Airport on February 18, 2017 in Melbourne, Florida.

Ahead of the November 6 midterm elections, Trump also whipped the crowd up into a frenzy about California Representative Maxine Waters who he has regularly said has a ‘low IQ’. 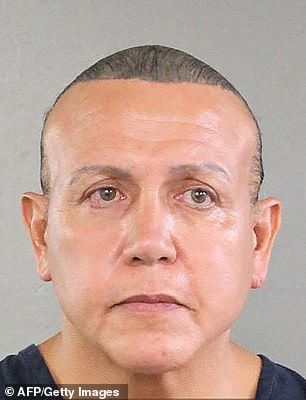 Mentioning a Democratic challenger to a Republican House who he said he will not name because he wanted to come across well as the rally Friday evening, the only said the person was ‘a big fan of Maxine Waters’.

Trump seemingly incited boos by repeating her name until he got a strong negative reaction.

His comments in Charlotte came despite the fact Walters was one of the targets of the pipe bomber.

None of the intercepted bombs exploded and no one was hurt.

It’s not expected to be the last time Trump make controversial comments in the lead-up to the day the US decides which party will control Congress.

He’s planning at least 10 rallies over the five-day stretch before Election Day.

He was set to speak Saturday at the annual convention of the Future Farmers of America in Indiana before rallying in southern Illinois for Representative Mike Bost.

As he left Washington on Friday, Trump told reporters that he might just make some more unsavory comments.

‘I could really tone it up,’ he said, ‘because, as you know, the media has been extremely unfair to me and to the Republican Party.’