The White House’s annual turkey-pardoning tradition got a pre-game warmup on Tuesday with a briefing room visit by one of the white birds.

Press aides refused to say whether the visitor was ‘Peas’ or ‘Carrots,’ the pair of birds chosen from a flock of 50 to compete in an online poll – whose winner gets Trump’s clemency and a lifetime of ease at a Virginia Tech University agriculture research center.

Photographers made ‘gobble’ noises. One reporter shouted a question to the bird about whether it had promised anything in exchange for his pardon.

The turkey was too short for the podium that Press Secretary Sarah Sanders usually occupies, and eventually offered only its signature sound.

Meet the press: The two turkeys fighting it out for a presidential pardon went to the White House, but only one was taken to the Brady briefing room, the usual scene for Sarah Sanders’ ill-tempered question and answer sessions with reporters 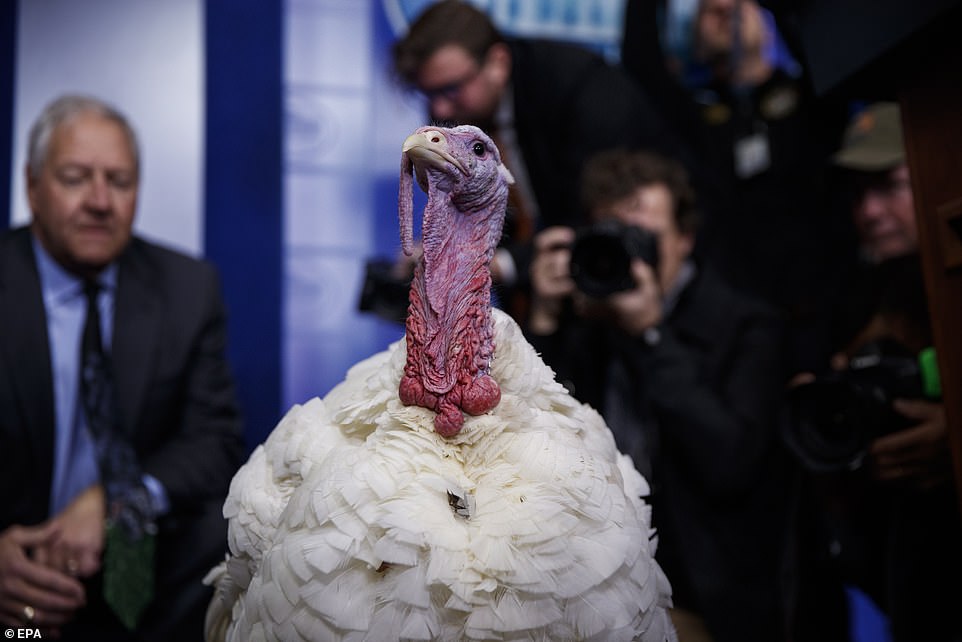 Uncaged: The turkey – whose name was not disclosed – was waiting to learn if it would be the recipient of a presidential pardon 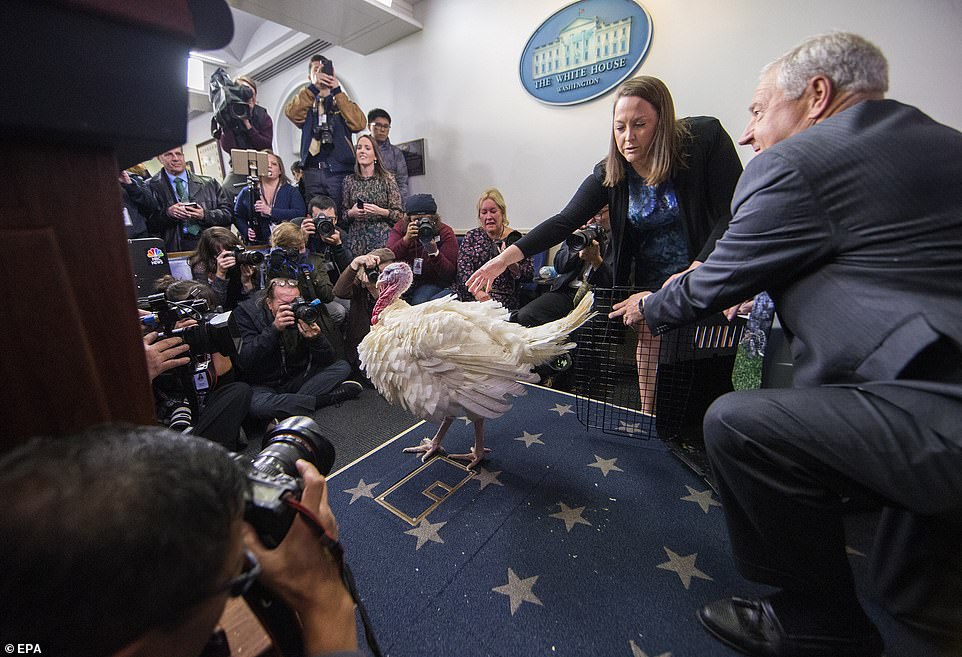 Gobbling up the attention: The turkey – which is either Peas or Carrots – was questioned by one reporter on what it had offered in return for the presidential pardon it was in contention for 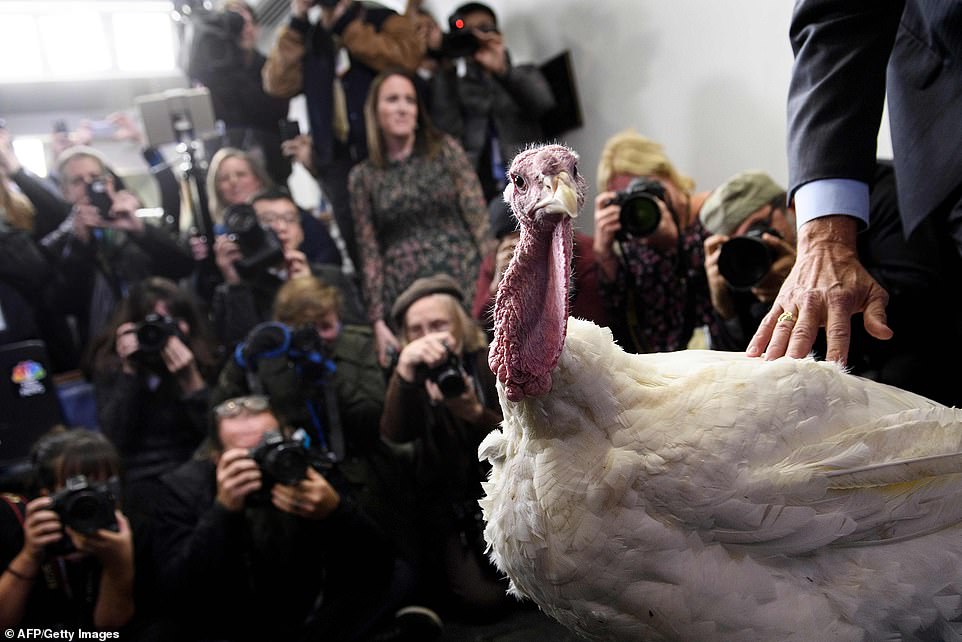 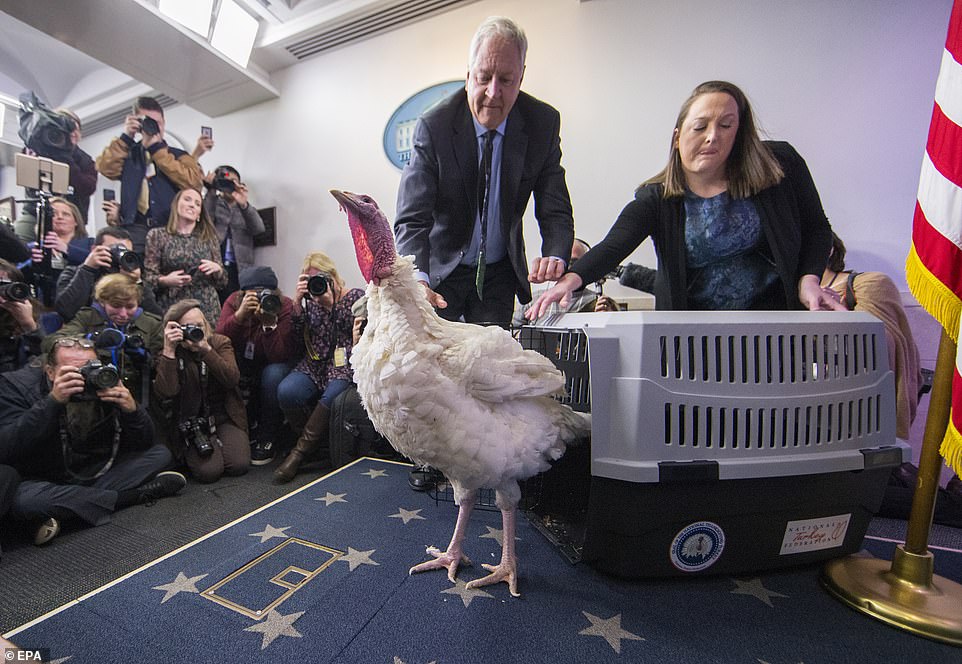 Unleashed: Jeff Sven, the National Turkey Federation’s chairman, accompanied the fowl and coaxed it out of a carrying crate with a ‘Come on, buddy!’ 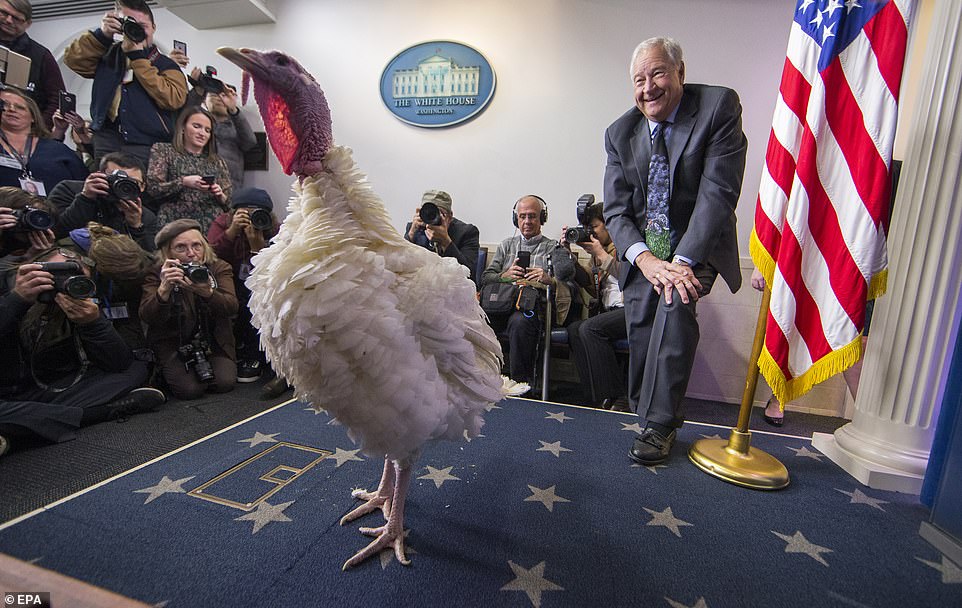 Standing proud: The turkey spent just four minutes at the briefing room podium – more than Sarah Sanders has managed since the midterms 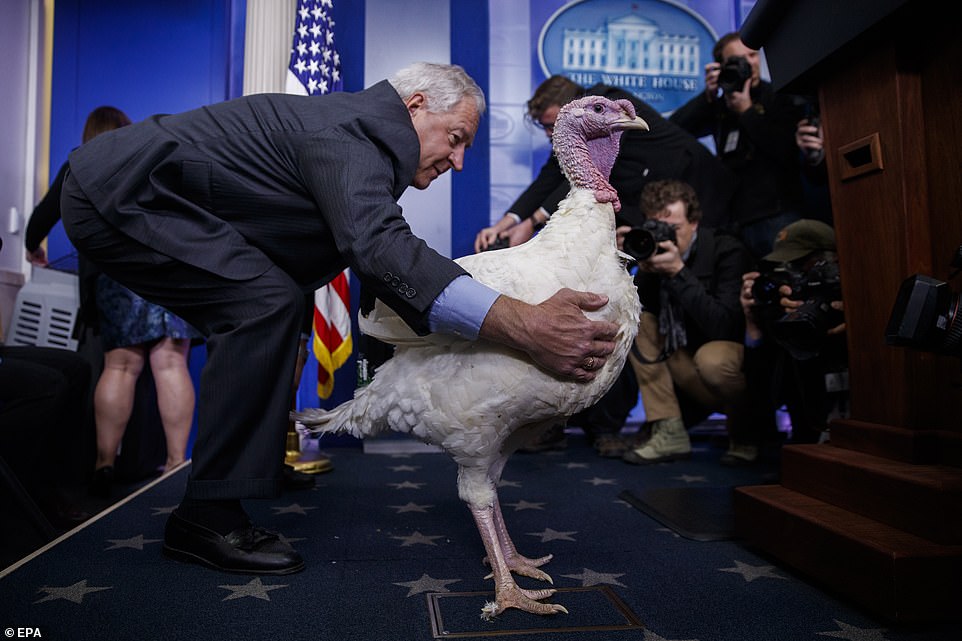 No chicken: The turkey – whether it was Peas or Carrots is unknown – is to spend the rest of its life free from the threat of the slaughterhouse, at Gobblers Rest in Virginia

This is the first year the presidential turkeys, furnished by the National Turkey Federation, came from a grower in South Dakota. Ruben Waldner, whose farm is near the town of Huron, brought them.

The turkey trade group said Waldner prepared them for the pressures of the White House ‘from an early age by acclimating the turkeys to the sounds of a crowd, bright camera lights and standing comfortably on a table.’

But first came the harsh lights of the briefing room that used to host Sean Spicer and now is Sanders’ occasional haunt.

Jeff Sven, the NTF’s chairman, accompanied the fowl and coaxed it out of a carrying crate with a ‘Come on, buddy!’

After some wing-stretching and a cascade of camera-shutter noises, its four-minute visit quickly ended. but not until it took a few steps away from the cage. 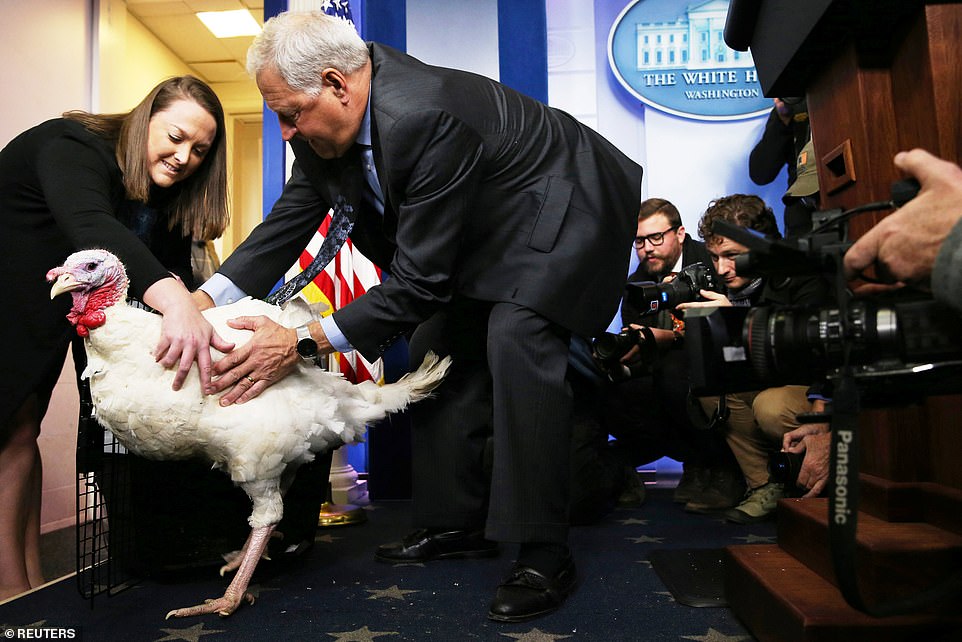 White House press aides refused to say which bird was the unexpected guest, but it posed amid a cascade of camera shutter clicks 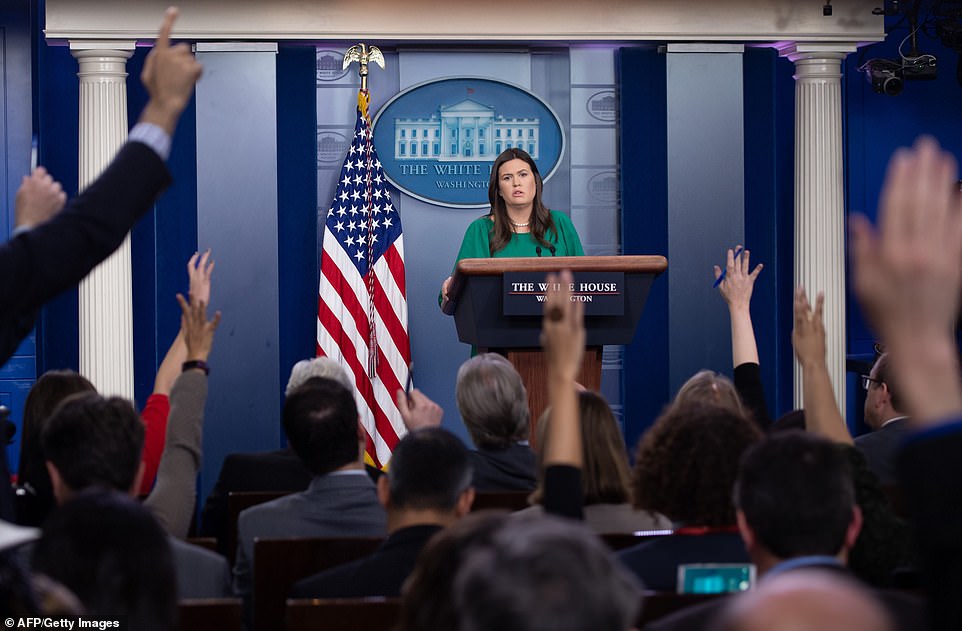 Brief change: The turkey stood in for Sarah Sanders but there was no sign of her usual  tone

The presidential turkey pardoning tradition goes back to 1947, when Harry S. Truman was president. Thirteen successive administrations have taken part.

This year’s two birds, one of which will officially serve as the ‘alternate,’ were originally named Jeff and Ruben before the White House rechristened them.

The turkeys spent Monday night at the Willard intercontinental Hotel near the White House, shedding feathers on the floor and nesting on a bed of wood chips.

Neither turkey will find itself dressed with stuffing. They will both end up at ‘Gobbler’s Rest’ on Virginia Tech’s campus in Blacksburg, Virginia, living out their lives with visitors and veterinary care.