Preston 4-1 Middlesbrough: Emil Riis Jakobsen bags a brace to spoil Boro’s chances of reaching the play-offs on the final day of the season

By Mike Whalley For The Daily Mail

It was as well for Middlesbrough that their play-off fate ended up being taken out of their hands by results elsewhere – as they completely lost their nerve on a nightmare day in Lancashire.

Chris Wilder’s team let down 5,000 passionate and noisy travelling fans with a dreadful display, losing a match they had to win against a mid-table Preston side who married total professionalism to a carefree attacking spirit.

From the moment Alan Browne gave the hosts the lead midway through the first half, those Boro fans who had travelled in hope of a party must have known it was not to be. 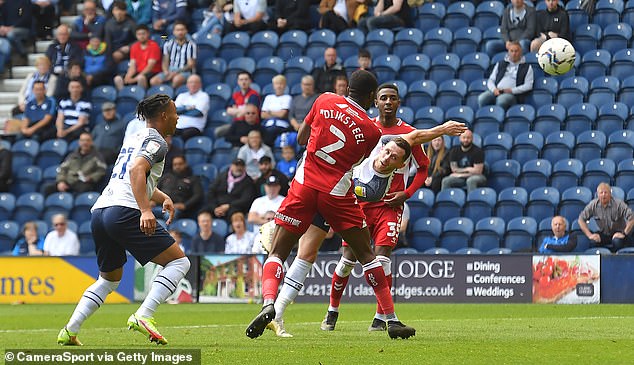 Hapless defending contributed to a Dael Fry own goal before the break, and although Marcus Tavernier very briefly raised hopes of a revival, Emil Riis Jakobsen soon snuffed it out.

And the visitors’ misery was completed as Paddy McNair was sent off for handling a Cameron Archer shot on the line, and Riis converted the penalty for his 20th goal of the season.

Boro could argue that it was an achievement to be in play-off contention on the final day at all, having been 14th when Chris Wilder arrived as manager in November – but they were fifth at the beginning of April, and a late-season loss of form has played a large part in the failure to finish in the top six.

Luke Daniels has already made three saves in the game’s opening quarter – the best of which was to push away a deflected Riis shot – when he was beaten for the first time as Browne pivoted to steer in a Brad Potts cross.

It quickly got worse for Wilder’s team. Daniels got away with fumbling a Daniel Johnson corner into his own net, the goal disallowed for a foul on the keeper by Archer, but was beaten again within a minute, as Riis darted away from Isaiah Jones and Jonny Howson, and drove a low cross that centre-back Fry turned in for an own goal.

Boro struggled to keep their heads. Ali McCann steered wide a chance to make it three for Preston, and then McNair was booked for a tangle with Sepp van den Berg that ended in a free-for-all as players from both sides piled in.

Tavernier drifted in beyond the far post to head in Anfernee Dijksteel’s cross three minutes into the second half, but that was as good as it got for Middlesbrough, as Riis capitalised on more woeful defending to surge on to Archer’s pass and lift a shot beyond Daniels.

Boro, far too late, finally found some attacking verve, as Daniel Iversen palmed away Duncan Watmore’s glancing header, and then blocked substitute Folarin Balogun’s shot – but McNair’s red card and Riis’ second of the game confirmed an emphatic away defeat.