Father Peter Conniffe (pictured), formerly priest at Our Lady of Dolours in Salford, wrote a grovelling letter to the victim claiming he had ‘deep regret’

A priest who was awarded an OBE by the Queen has begged for forgiveness in a letter to a woman he had ‘sexual activity’ with when she was a teenager.

Father Peter Conniffe, formerly priest at Our Lady of Dolours in Salford, wrote a grovelling letter to the victim claiming he had ‘deep regret’.

She claims Fr Conniffe’s sexual behavior towards her lasted 10 years and had a devastating impact on her life causing ‘flashbacks’.

But despite his apology, the woman, now in her 50s, she says she still feels ‘angry’ about what happened.

Fr Conniffe was investigated by police after the woman – who met him after going to confession as a schoolgirl – made a complaint of historic sexual abuse.

The case was not pursued to criminal action, and Fr Conniffe denies ‘any accusation of sexual assault’.

However, the woman has been compensated by the religious order he belongs to, the Servite Order.

In the letter Fr Conniffe, who was once honoured by the Queen, wrote asking for forgiveness ‘for all and any sexual activity towards you which  I may have thought consensual, but which has come to be deemed non-consensual and abusive’.

The letter begins: ‘I write to acknowledge all that you have stated about my involvement in your life. 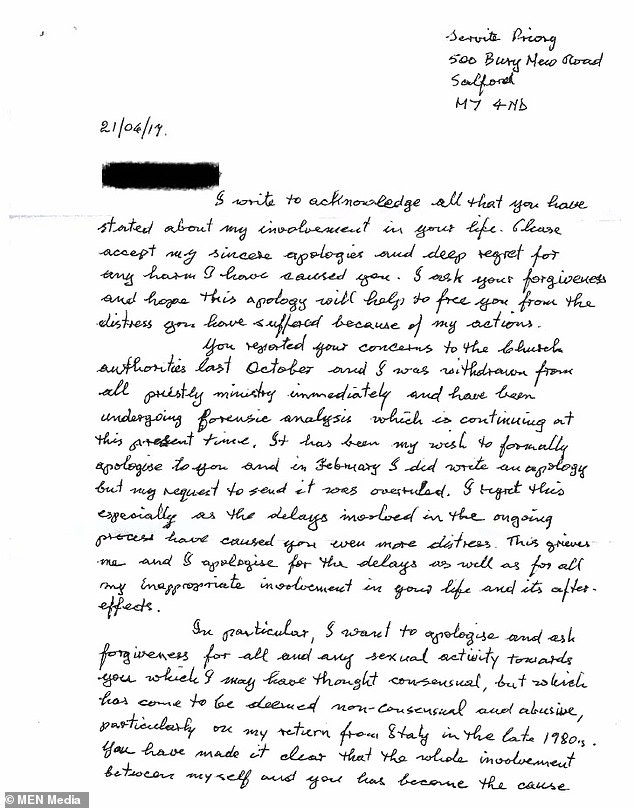 In the letter Fr Conniffe, who was once honoured by the Queen, wrote asking for forgiveness from the woman

‘Please accept my sincere apologies and deep regret for any harm I have caused you. I ask your forgiveness and hope this apology will help to free you from the distress you have suffered because of my actions.’

Fr Conniffe goes on to apologise for his ‘inappropriate involvement in your life’ adding: ‘You reported my involvement with you as an abuse of power, both by my forceful personality and as a senior person in a role of trust and responsibility.

‘I ask for your forgiveness for this and for my failure to live up to the demanding requirements of a priest’s consecration and service.’

Following an investigation by the Roman Catholic church, the priest has stepped down from duties at Our Lady’s and from his role as chair of governors at St Philip’s RC Primary School.

The woman, who has asked to remain anonymous, reported Fr Conniffe’s conduct towards her as a teenager and young woman in the late 70s and 80s to the church.

She says she first came into contact with him when she was an ‘impressionable’ schoolgirl. 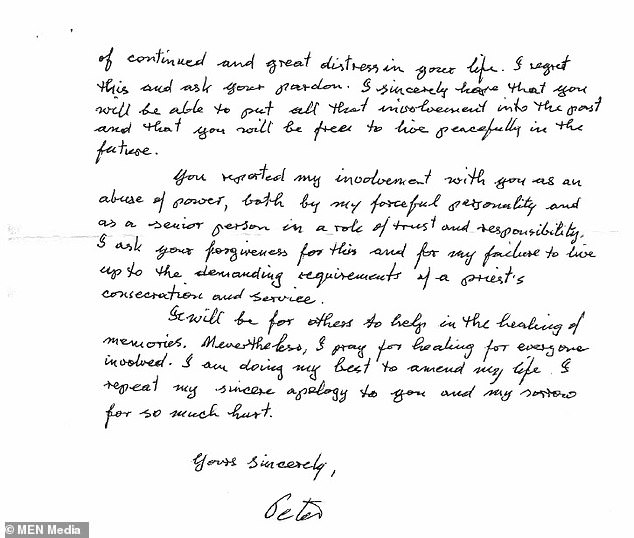 The woman, who has asked to remain anonymous, reported Fr Conniffe’s conduct towards her as a teenager and young woman in the late 70s and 80s to the church

She said: ‘He was very charismatic and personable. I was an impressionable teenager. I started going to see him for confession.

‘I really looked up to him. I thought he was a really charismatic priest. You could talk to him really easily.’

She says Fr Conniffe’s sexual behaviour towards her lasted for about 10 years and caused her become ‘very ill’.

She said: ‘When I was in my early 30s I started having flashbacks’.

‘I became quite ill. I don’t know if it was a breakdown, but I was very, very ill. I was under mental health services and started having psychotherapy. It lasted for about four and a half years and it really helped – it kind of put it to bed.

‘But then I started having flashbacks again and went back into counselling. That was the trigger [for reporting what had happened].

‘I wrote to the church and said I was reporting something I should have reported years ago.’

Fr Paul Addison, the senior priest in the Servite Order, also wrote to the woman – to apologise for the ways she ‘had been wronged in sexual behaviour towards you as a teenager and young adult’.

‘I have no difficulty stating that this is something that should never have happened by an adult in a position of responsibility’, Father Addison added.

Following the woman’s complaint to church the matter was referred to Greater Manchester Police.

That triggered a year-long investigation, before it was concluded that the case didn’t meet the threshold for prosecution.

The woman then instructed law firm Slater and Gordon to begin a civil action against the church. In December she agreed an out-of-court settlement.

She’s now released the letters at the centre of the case because she wants to make sure ‘no-one else is put at risk’.

She said: ‘I feel that he’s got away with it. He has duped so many people for so many years.

‘He is looked up to, but he has led this awful life that has affected my life.

‘I still go to church but I’m finding it more and more difficult.

‘I do not want revenge, but I feel the parish should know.

‘It’s in the public interest that this is made public so no-one else is put at risk. I also want transparency and honesty from the church.

‘I am a strong person and I have always been determined that I am not going to let this win. I think I just became totally determined to see it through – and that’s what I’m doing.

‘It was never about money – it was about acknowledgement.’

Fr Peter Conniffe was as awarded an OBE in 1999 for services to housing. He served at Our Lady’s, on Bury New Road, Kersal, for around 40 years, until late last year when the Catholic church’s Westminster Safeguarding Service concluded its investigation.

He was also chair of governors at St Philip’s primary school, next door to the church, for several years.

When the Manchester Evening News visited the church priory they were told Fr Conniffe was on ‘sabbatical’ and no longer lives there.

It is understood he’s not been carrying out duties at the church since October 2018 and also stood down from his role on the school governing body at the same time.

The Westminster Safeguarding Service made number of recommendations.

A letter outlining the recommendations, states the church must ‘take whatever action is necessary to restrict any future ministry undertaken by Fr PC such that he does not have unsupervised access to children or vulnerable adults’.

The letter, dated October 19, 2018, also recommends Fr Conniffe undertakes a ‘specialist programme of therapeutic intervention’ and is ‘subject to a safeguarding plan’.

Fr Conniffe declined to comment, but the Servite Order issued a statement on his behalf.

A spokesperson said: ‘There is no place for abuse of any kind in the church and the order takes all allegations seriously.

‘When the allegations came to light, the order and Fr Conniffe cooperated fully with a GMP police investigation.

‘No charges were brought following that investigation.

‘The order and Fr Conniffe have offered sincere and unreserved apology for all failures in standards that caused any distress or trauma.

‘The order has agreed a personal injury settlement and support package in this case.

‘We regret any failure to live up to appropriate standards by our members, we always cooperate with the strict policies and norms for safeguarding now in force throughout the Catholic Church.’

Richard Scorer, a specialist abuse lawyer at law firm Slater and Gordon, said: ‘This was an appalling abuse of position and power over a vulnerable young woman.

‘This priest knew that his behaviour was utterly wrong and yet it continued for several years.

‘His letter of apology fails to acknowledge the full extent of his actions and this only serves to show that he either won’t or does not fully understand their seriousness and the impact on my client who has to live with what he has done to her for the rest of her life.’