A primary school in London is set to cut its working week to four-and-a-half days because of a budget crisis, making it the first to do so in Britain.

St. Mary’s Catholic Primary School in Isleworth came under fire after news reports revealed a letter sent out to parents claiming the working week would end at 12.45pm on Fridays.

In a Facebook post yesterday, though, the school claimed ‘no decision has been made’ about how it will cut its budget.

This contradicts the letter sent out last week stating that parents should ‘make plans for the school year beginning September 2018’ in regards to childcare on Friday afternoons.

St. Mary’s Catholic Primary School in Isleworth (pictured) released a letter last week stating it was moving forward on plans to cut the week to four-and-a-half days. This came after the school asked parents to vote on what should be cut amid a severe budget crisis 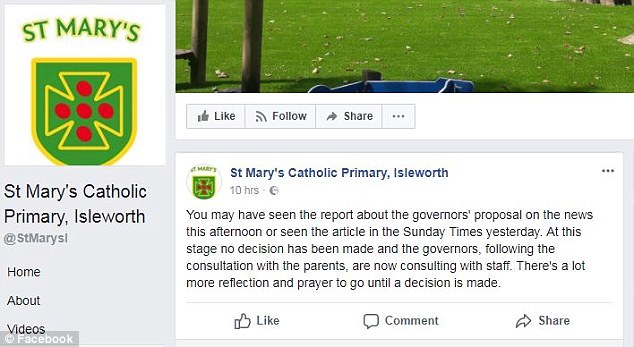 The school posted on its Facebook page after the news broke about the budget proposal. The post claimed ‘no decision has been made’, which contradicted a letter saying the school was moving forward with cutting the working week

The school originally revealed two scenarios for parents in October 2017 for how it could handle the budget crisis.

Parents were then told to answer questions about each scenario and voice their concerns.

If neither scenario was preferred, then the school offered for each parent to pay £400 per school year to prevent the debilitating budget crisis.

The letter last week said the school governors favoured the second scenario and would ‘develop the proposal into the final arrangements as a matter of urgency.’

Parents are now left confused as to what to expect from the impending school year as officials claim a final decision has not been made. 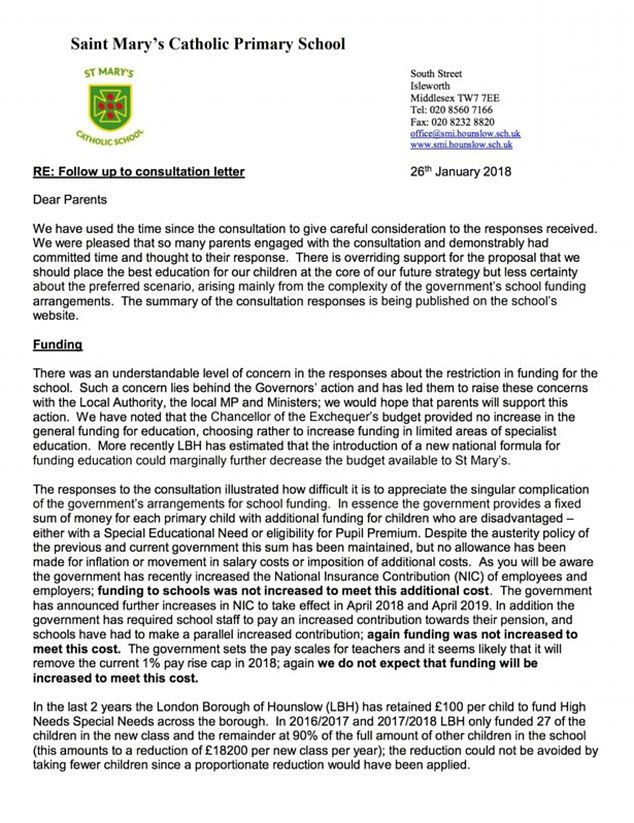 The letter (above) informed parents about the items that had been cut in the last five years to keep the school afloat. It told parents to make plans for childcare on Friday afternoons

One parent on Facebook said looking for childcare was a ‘difficult task’ and implored the school to make a decision quickly.

The school did say it would provide afternoon clubs for Friday afternoon, but those would only be able to accommodate half of the student population.

This is not the first set of budget cuts the school has gone through.

In the last five years, it cut a music teacher, a parent-support worker, and asked parents to provide essential supplies for the classrooms.

The violin and clarinet music classes were also cut.

An estimated 18,000 schools in Britain are facing budget cuts for the 2018 school year despite the government promising increased funding in 2020.