A village school has been closed instantly and may never reopen amid fears it will become ‘another Aberfan disaster’ – which saw 144 people die in a landslide.

Education chiefs ordered the immediate closure of the 158-pupil school after a survey revealed a risk of a massive landslide from the mountains above the classrooms.

The endangered Godre’r Graig Primary School at Ystalyfera, near Swansea, South Wales, is just 25 miles from the village of Aberfan where disaster struck in 1966 when 116 children were buried under a coal tip.

Godre’r Graig Primary School at Ystalyfera, near Swansea, South Wales, has closed indefinitely amid fears of a landslide from nearby coal mines which could create ‘another Aberfan’ 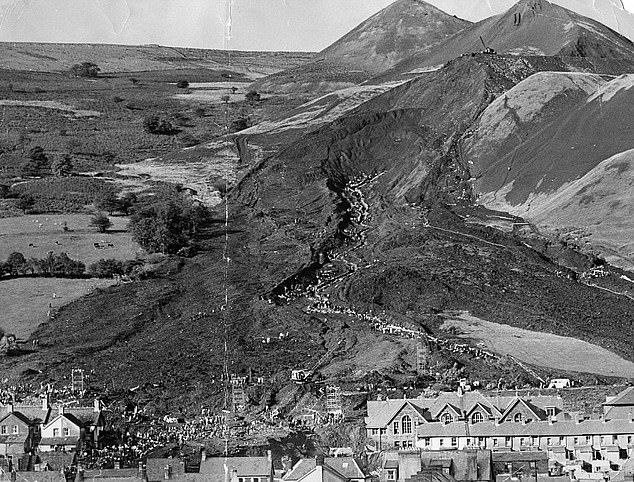 The primary school is just 25 miles away from the site of the Aberfan landslide (pictured), which killed 116 children and 28 adults in 1966 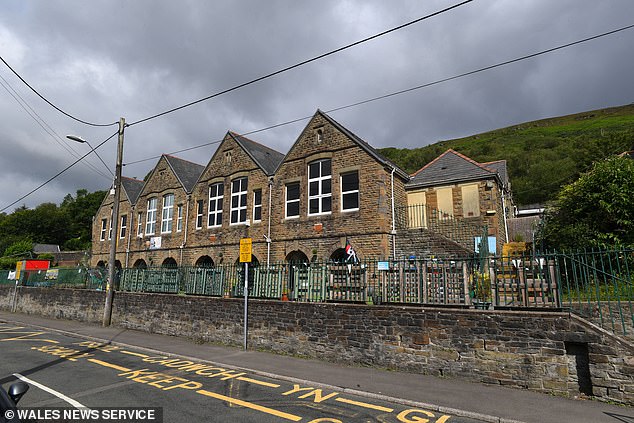 Council leader Rob Jones told how his ‘first thoughts’ were about the tragedy at Aberfan – and closed the school gates immediately just one week before the summer holidays.

He said: ‘Anyone will draw comparisons to schools that have been involved in this type of disaster previously and the potential of a disaster taking place here, and that was my first thought.

‘All the actions we have taken in this area are in order to protect and save life and when we are talking about children in a school, even low risk to me is too high a risk.’

It was such a swift closure that the school’s sports day, due to be held today, was scrapped. 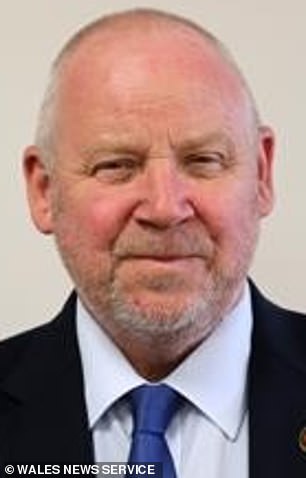 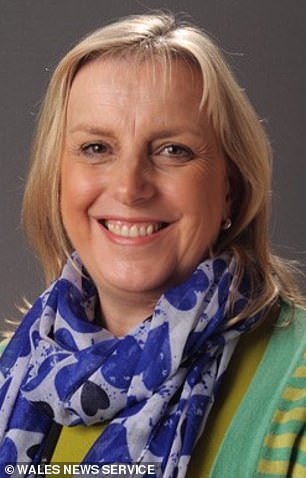 Council leader Rob Jones (left) told how his ‘first thoughts’ were about the tragedy at Aberfan – and closed the school gates immediately a week before the summer holidays. A letter sent to parents from headteacher Penny Argyle (right) said: ‘Further investigative work is needed and, as a precautionary measure, the school will close early for summer’ 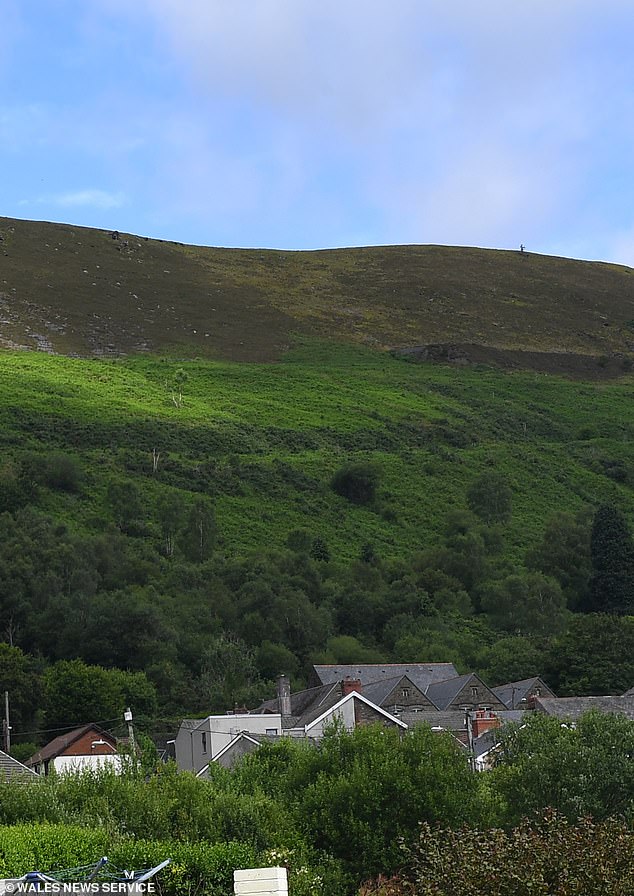 The hillside around the school is known locally as a ‘moving mountain’ which had been an issue for more than a century.

It has old quarry workings and small coal mines dating back more than 100 years – and geologists fear that heavy rain could cause a landslide on to the Victorian school.

The danger is linked to springs and ground water near the school.

Experts from the Earth Science Partnership warned that if a stream was blocked during bad weather, rising water levels and pressures in the tip could cause quarry waste to flow downhill.

Their preliminary report was received by the council on Wednesday – and it was ruled so serious that the school gates were closed the next day. 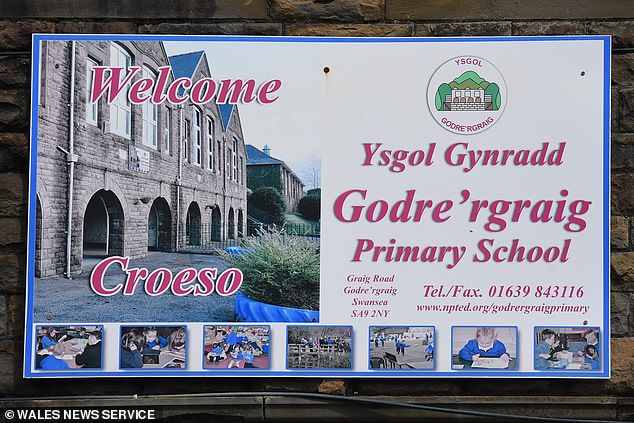 ‘We have concerns about the initial findings which have identified a medium hazard risk linked to the quarry spoil above the school.’

Shocked parents arrived at the school on Thursday to be given sealed letters to say the school is closing.

A letter sent to parents from headteacher Penny Argyle said: ‘Further investigative work is needed and, as a precautionary measure, the school will close early for summer.

‘We will be keeping parents informed of developments and arrangements made to relocate all pupils and staff on to an alternative single site ready for September.’ 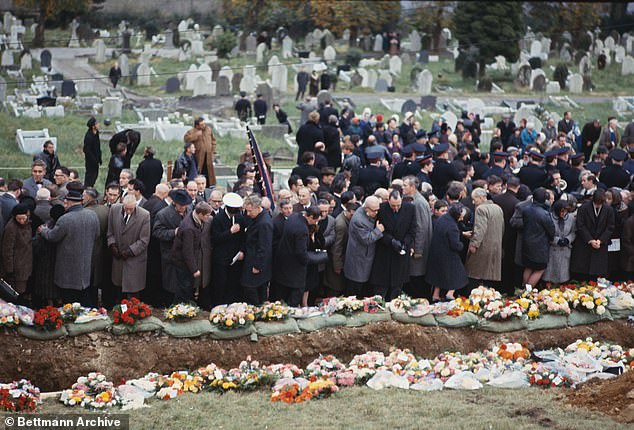 On October 21, 1966, a massive coal tip crashed down the mountains in the mining village of Aberfan, engulfing everything in its path. Pictured are attendees of the mass funeral site 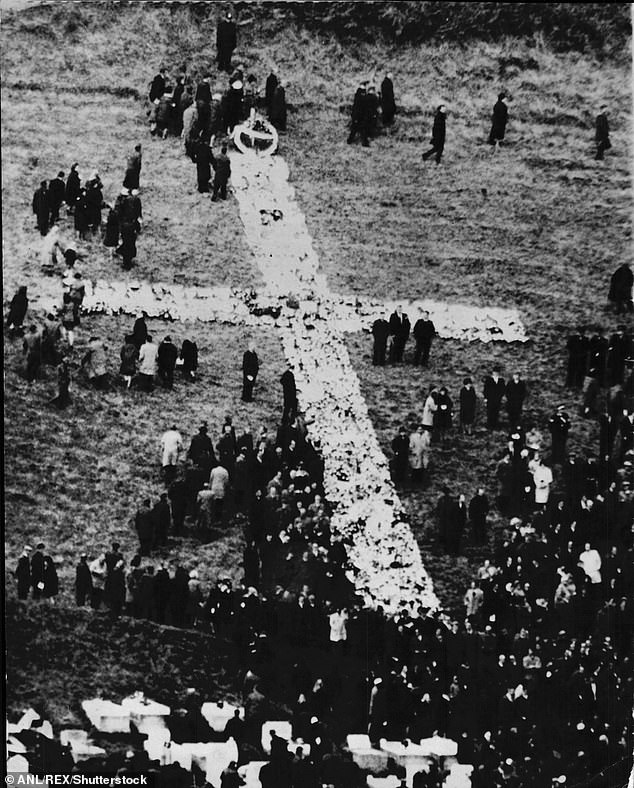 Desperate parents rushed to the scene and clawed at the mud with their bare hands, clinging to the hope that the sons and daughters they waved off just hours earlier might still be alive. Pictured is the cross of flowers that was placed on the hillside during the funeral of the victims

Council leader Rob Jones told parents: ‘I would like to emphasise that we understand the enormity of this decision, but the safety of our children, staff and residents must be, and has always been, the council’s priority.’

The steep-sided mountain around the school has been hit with a series of landslides over the years – and one street of 11 terraced homes was then issued with a prohibition order requiring people to move out in 2017.

Mother-of-two Tanya Rees said: ‘None of us knew this was coming. We are in shock – the school is the hub of the community.

‘We had no idea these surveys were going on. I feel we should have been told earlier.

‘This has come completely out of the blue. We feel very angry and let down – we’ve suddenly lost our school and with no idea where the children will go next year.’

A father said: ‘This is very serious. it is actually quite shocking – we all knew the school is built on quarry waste. But we had no idea it was so severe that our children might be at risk.

‘We’ve got no idea where the children will go in September.

What was the 1966 Aberfan disaster?

At 9.15am on October 21, 1966, a massive coal waste tip crashed down the mountainside of the mining village of Aberfan – killing 116 children and 28 adults.

The landslide engulfed everything in its path, including Pantglas Junior School.

Minutes after the natural disaster the village had lost half of its children.

Parents rushed to the scene and clawed at the mud to try and free their trapped children. 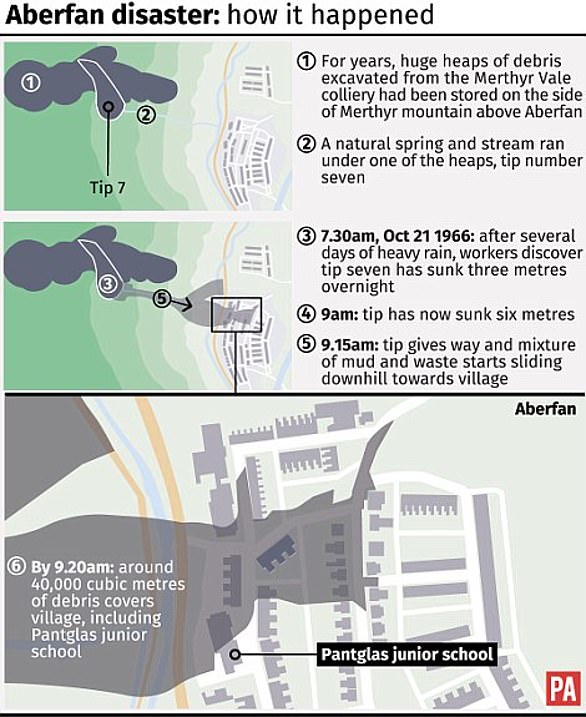 Five teachers and 109 children from the school were declared dead.

The disaster was the result of one of seven spoil tips, which sat on the slopes above the village, collapsing.

The structure went against the National Coal Board (NCB)’s rules, as it was partly built on ground with water springs underneath.

As a result of three weeks of heavy rain, the tip became saturated and around 140,000 cubic yards (110,00m cubed) slipped down the side of the hill.

An official enquiry into the tragedy was chaired by Lord Justice Edmund Davies and eventually blamed owners NCB for what happened.

NCB chairman Lord Robens was criticised for giving misleading information about whether he knew whether there were water springs on the hillside.

But no charges were brought against the NCB or its employees.

The Aberfan Disaster Memorial Fund (ADMF) was set up on the day and raised £1.75million.

It took a bitter battle on behalf of local residents to get the other tips on the hillside removed.

The clearing was paid for by the Welsh government and the memorial fund.

Several people who survived the disaster suffered long-term health problems, and many were left with post-traumatic stress disorder.