What cost-of-living crisis? Prime London property prices predicted to climb 6% next year placing it third behind LA and Miami

London’s prime properties are predicted to see 6 per cent price growth next year – the third highest globally – despite an increasingly choppy economic backdrop.

The UK’s capital sits just behind Miami and Los Angeles where prime prices are expected to rise by 8 per cent and 7 per cent respectively, according to estate agent Knight Frank.

Madrid comes in fourth with 6 per cent growth predicted for 2023, followed by Seoul with 5 per cent.

The price of London’s most expensive homes could rise by 6% next year, Knight Frank said

In its Global Prime Forecast Knight Frank said that London’s market is being helped by strong demand from domestic buyers.

It is also being supported by the resurgence of international buyers, a market which suffered during the pandemic, thanks in part to the weaker pound.

However, the property expert warned that inflation risks will be more persistent in the UK and Eurozone, making them amongst the last to lower their mortgage interest rates.

Further into 2023 and 2024, it said, this may result in a weakening or reversal of the currency advantage currently enjoyed by those buying homes in the UK with US dollars. 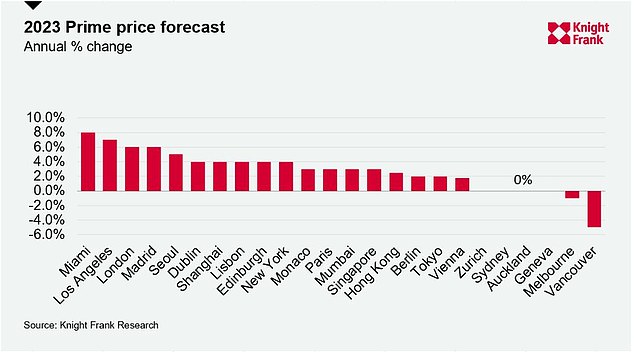 Only Vancouver and Melbourne are predicted to see a drop in price growth for prime property next year despite the uncertain global economic outlook.

Across the world the firm expects more muted price growth in 2023, averaging 2.8 per cent across all 25 cities it monitors (see diagram above).

The price growth gap between the highest and lowest performing cities is expected to narrow from 27 percentage points in 2022 to 12 in 2023.

In most cities, it said, a strong labour market, rising incomes, the increased equity in prime homes accrued during the pandemic and – for those with mortgages – the high proportion of fixed rates, will mitigate the impact of the slowdown.

Growth predictions for 2022 revised down

Across the 25 cities tracked, Knight Frank now expects prime prices to rise by 4.4 per cent on average this by the end of 2022, down from the 6.1 per cent it predicted six months ago.

Despite this reduction the expected growth for the year still outstrips that seen in nine of the past 10 years.

London is one of those that have taken a hit. Knight Frank has downgraded its 2022 projections from around 7 per cent in December 2021, to 4 per cent as of June this year. In contrast, Edinburgh has seen one of the largest upward revisions with expected price growth for the year jumping from 5 to 8 per cent. 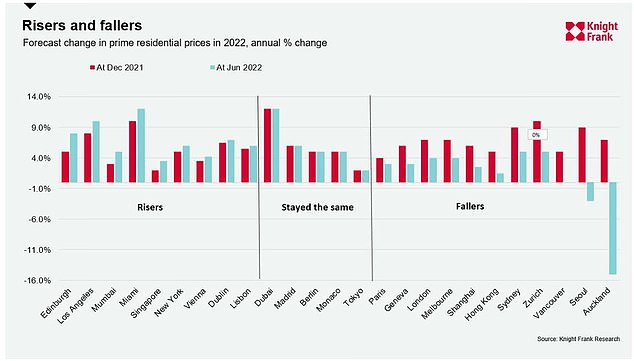 Halifax’s recent house price index found that while London continues to record slower annual house price inflation than the other UK regions, the 7.9 per cent rate of growth in July was the highest in almost five years.

With an average property now costing £551,777, the capital’s already record average house price continues to push higher, up by £40,361 over the last year.

Although the prime residential market sector has a higher proportion of cash buyers and therefore could be considered less exposed to higher mortgage rates, tighter monetary policy and rising interest rates worldwide are inevitably influencing prime markets too.

Despite this, Miami and Dubai are both expected to see double-figure increases in their prime property prices of 12 per cent over 2022 – though the figure still represents a slowdown compared to last year.